Step back in time

Step back in time 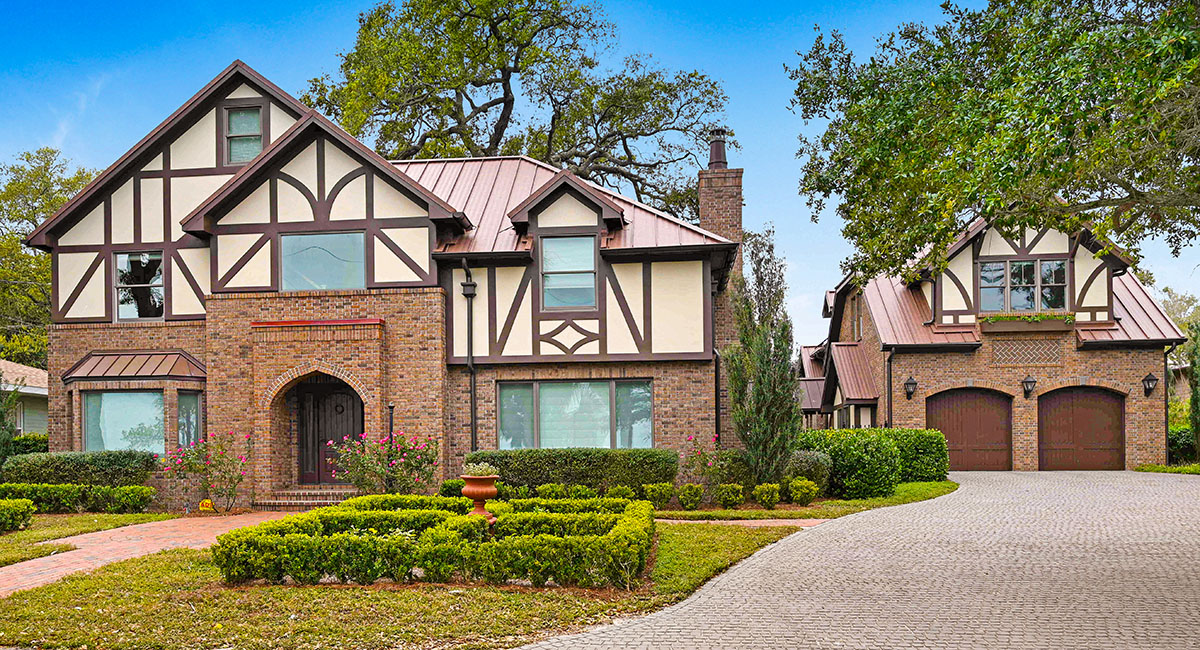 If William Shakespeare could visit Rockledge Drive, the writer would instantly recognize an architectural style not often seen along the Space Coast: a Tudor home. JAMES GREENE PHOTOS 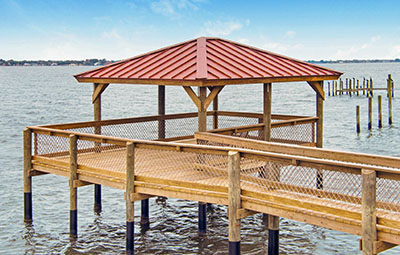 Unlike most Tudor houses, the Rockledge Drive property includes a private dock and 187 feet of waterfront on the Indian River.

If William Shakespeare were to meander through Rockledge Drive, he would come upon a structure very familiar to his time. On the leafy road perfect for unhurried drives sits an architectural gem The Bard would have instantly recognized but that is rarely seen in Brevard: a Tudor mansion.

It’s easy to spot the style that exudes a charming, old-world ambiance. In the United States, this architectural trend originated in the mid-19th century as a celebration of the English Medieval and post-Medieval styles of the 1600s and 1700s.

Because they were so elaborate and well-built, Tudors are usually at home in upscale neighborhoods.

The Rockledge Drive home ticks off all the Tudor boxes and then some, because it is a safe bet to say that no Tudor building Shakespeare might have known in Stratford-upon-Avon ever had such a glorious view of the Indian River from the front door, not to mention a private dock and 187 feet of waterfront.

From this particular Tudor, the views include spectacular sunrises, manatees, dolphins and something Shakespeare, or Henry VIII or Elizabeth I, for that matter, never saw: rocket launches.

“I sold waterfront homes in Annapolis, Maryland, before moving to Brevard County in 2008, so I have seen many Tudor-style homes up north,” Vista said. “However, I have not seen many in Brevard County. This house is very unique, because not only is it a Tudor-style home on historic Rockledge Drive, but it also has many distinctive features throughout the property and with the structures.”

The residence’s appeal begins from the ground up, for there are very few areas along the Space Coast as desirable, yet still relatively secluded, as Rockledge Drive.

“I have sold many waterfront homes through the years and Rockledge Drive is definitely one of the gems of Brevard County,” she explained. “It’s almost a tucked-away secret people moving to our area don’t even know about until I take them there. It’s close to Viera and historical Cocoa Village, yet with its winding road and tropical setting, it gives you the feeling of privacy and being someplace remote and wonderful. It’s one of my favorite streets on the Space Coast.” 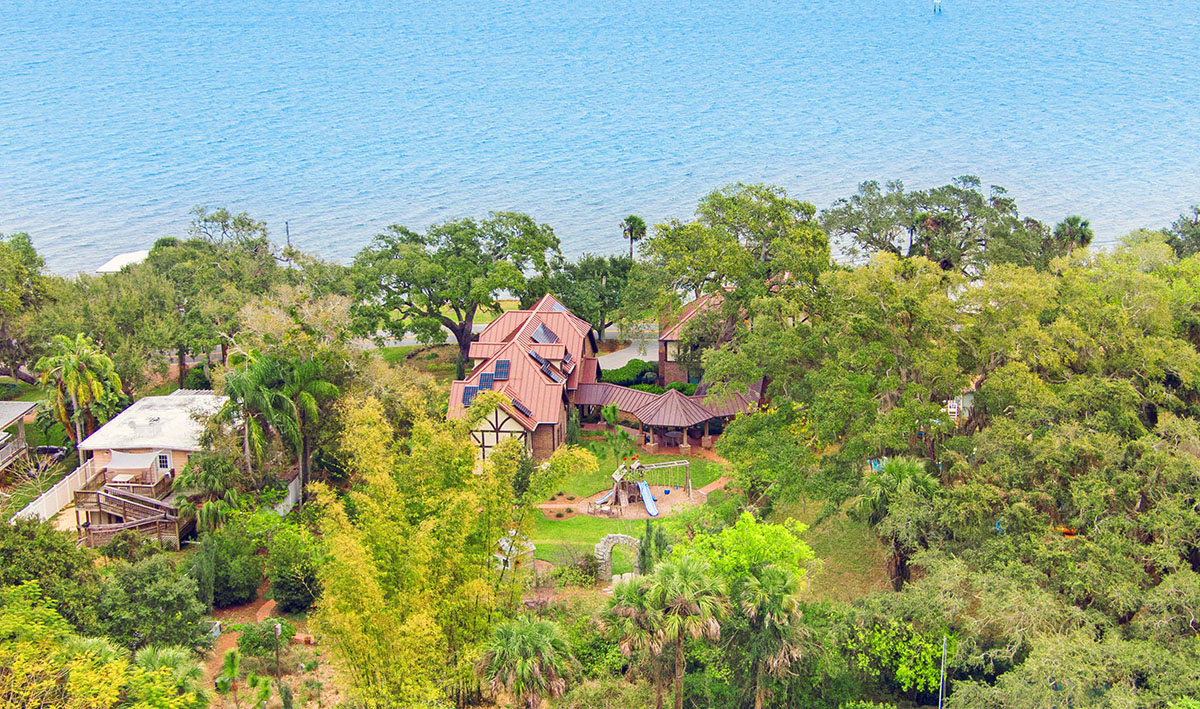 Like most of the homes in the area, the Tudor is ringed by trees, which residents on Rockledge Drive appreciate and preserve, according to Carole Pope, president of the Preservation Education Trust.

At 3,455 square feet of living space and 4,702 total square footage, the house features plenty of room to fully embrace the grandeur of the Tudor style.

The previous owners, who purchased the home in 2010, launched a vigorous campaign of major renovations and additions, both inside and outside the house. An oversized detached two-car garage with a 750-square-foot studio upstairs joinsthe three-story main house through a breezeway.

“They also added a new dock with an expanded, covered deck, to enjoy the water and the views,” Vista added. “The entire main house has been completely remodeled with new rooms, wood flooring, a new kitchen and even the stairway was moved and redesigned.”

A porte cochere now also connects the back of the garage to a 400-square-foot, concrete-reinforced storage room that doubles as a storm shelter.

A problem often facing owners of Tudor homes is that the houses tend to be dark, since the style originated in an area of the world where rain, snow and generally miserable weather drives people toward architectural styles that offer security and warmth. Thanks to the thoughtful renovations of its previous owners, this house does not have that issue.

“The house is now new and fresh, light-filled and stunning,” Vista said.

The house celebrates the grandeur of the Tudors, but it squarely faces the 21st century and the vagaries of Florida weather with hurricane/impact windows and metal and copper roofing. Solar panels generate enough power to run the home, but the energy efficiency doesn’t stop inside the house, for the garage is pre-wired for two electric cars and a whole-house generator boasts a 10-day fuel capacity. 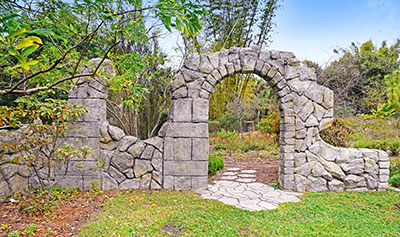 In the house’s spacious backyard, a faux medieval wall hints at the romance of long-ago knights and castles now faded and serves as entrance to a secret garden.

With almost an acre of land, the lot offers plenty of opportunities for landscaping. A faux medieval wall hints at the romance of long-ago knights and castles now faded. The wall serves as entrance to a secret garden perfect for meditation.

The gardens, while adopting Tudor sensibilities, are equally attuned to Florida living.

“The garden and the landscaping are quite unique,” Vista said. “The previous owners hired a landscape designer who utilized mostly Florida native plants which are lagoon-friendly and need little irrigation or fertilizer.”

The garden also includes tropical fruit trees, including several varieties of mangoes and avocados, plus starfruit and bananas. It is so well designed to attract pollinators and birds by providing food, shelter and water that it has been named a certified wildlife habitat by the National Wildlife Federation.

The home’s original owner, Roger Ingram of Barnett Bank, built the house closer to the road in order to preserve a large oak tree behind.

“Most people who buy houses here on the drive appreciate the canopy of trees and are very protective of them when FPL or others come through the area cutting,” said Carole Pope, president of the Preservation Education Trust that restored Lawndale, a historical property also on Rockledge Drive.

“The City of Rockledge is also supportive of keeping the tree canopy and has marked the road with signs warning drivers of height and width limitations.”

The combination of house, garden and location make for an idyllic combination Shakespeare would have appreciated.

“Everyone I showed the house to said it was beautiful,” Vista said.