Out of this world

Out of this world 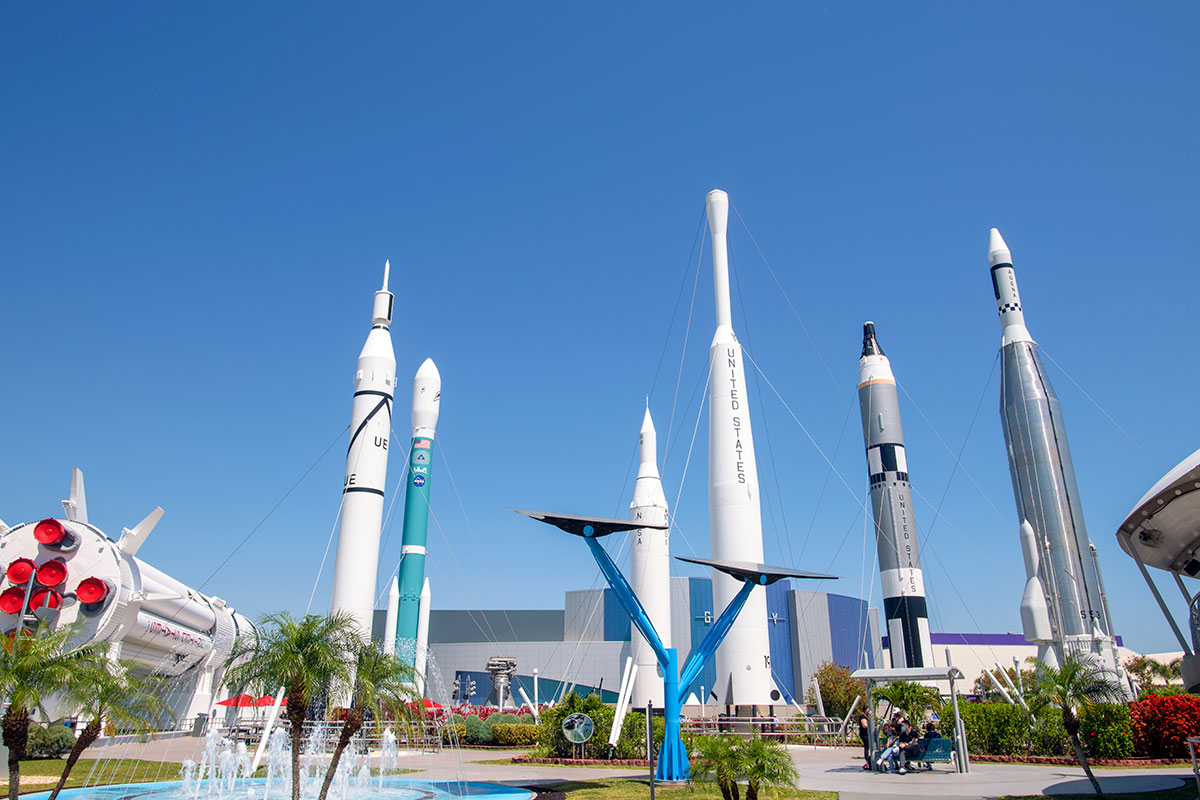 The first stop on the Kennedy Space Center Visitor Complex is the Rocket Garden where all the rockets NASA has used over the years of manned space flight are displayed. FRED MAYS PHOTOS

Complex lets visitors experience trips to the moon and beyond

With rockets launching almost every week, there is a renewed interest in America’s space program. People line the beaches and roadways surrounding Kennedy Space Center in Florida to watch rockets launched from pads 39A and 39B, and the adjoining Canaveral Space Force Base pads.

Since the opening of NASA’s Kennedy Space Center 60 years ago, large crowds have been coming to Brevard County for a firsthand experience as the race for the moon heated up. For a comprehensive look at the space program, tourists can head to KSC’s visitors complex.

If you’re going to go, be there at 10 a.m. when it opens. And buy your tickets online in advance. Otherwise, tickets can be purchased at self-serve kiosks at the entrance. The complex doesn’t make public attendance numbers, other than saying it is more than 1.5 million visitors a year. Weekends are especially crowded. 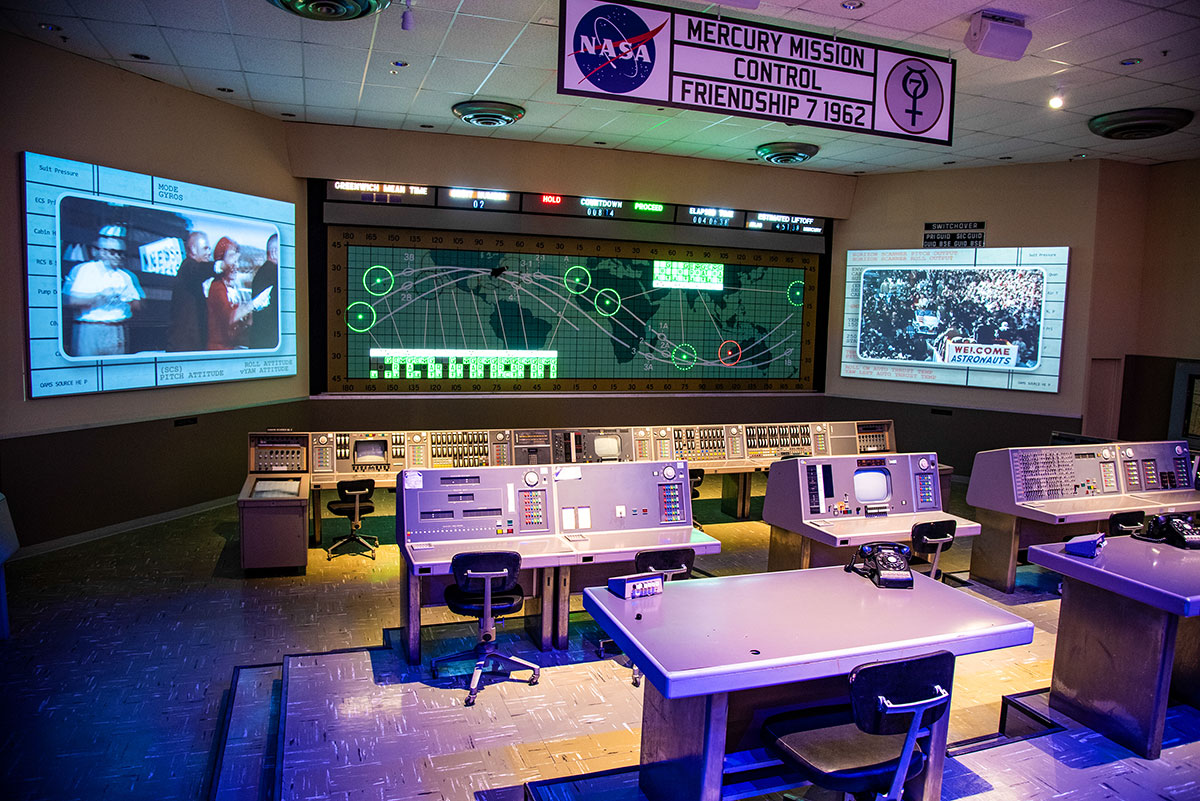 Visitors can see a mock-up of the Mercury Control Room used in the 1960s. Can you see the rotary dial telephone?

Security at the complex is tight. Backpacks and handbags are searched. Masks are no longer required, but encouraged when inside venues.

Quick tip right up front: If you want to see the Apollo/Saturn V exhibit, go to the sign up station immediately and pick a time for your tour. The exhibit is in another area of the Space Center and you have to make a reservation for a shuttle bus to take you there. It’s first come, first served and reservations do book quickly. Allow 90 minutes for the exhibit, including the drive time.

The Apollo/Saturn V complex features exhibits of the Apollo moon landing missions. You get to walk on a dusty lunar surface simulation and touch a moon rock. 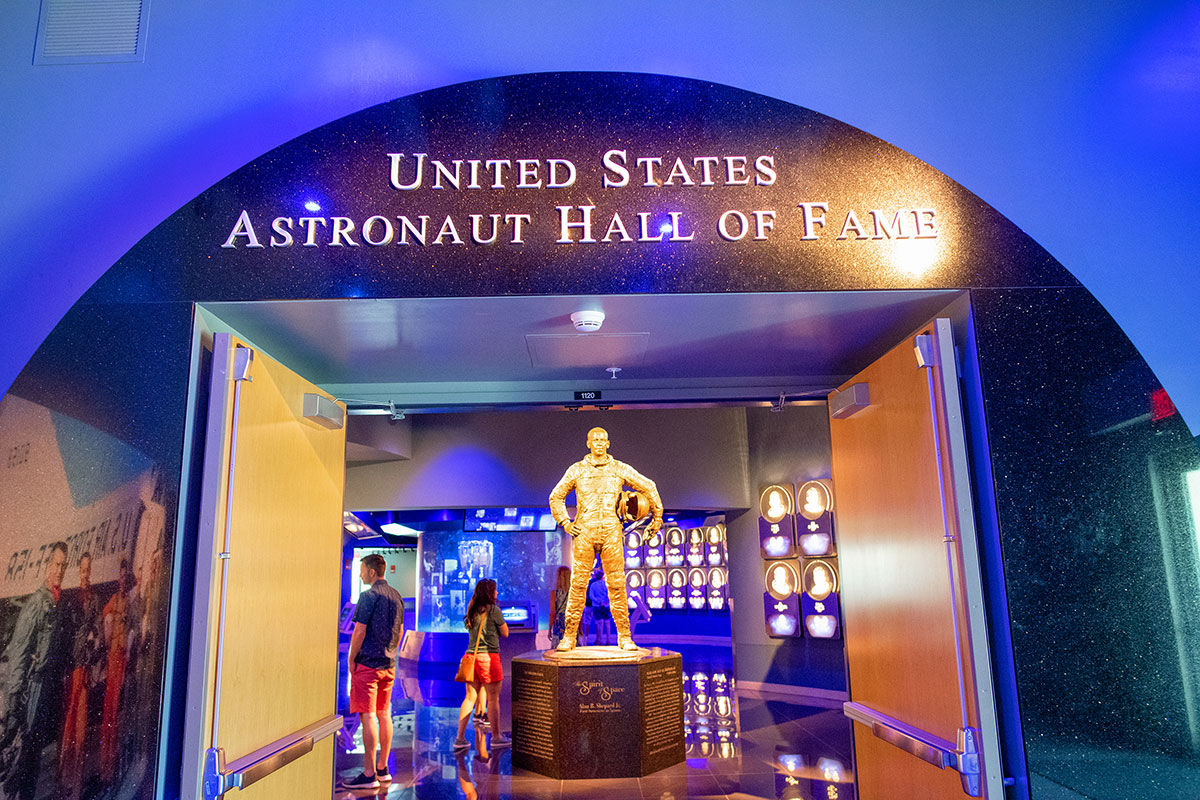 The Astronauts Hall of Fame features a history of NASA astronauts, from the Mercury program to today. 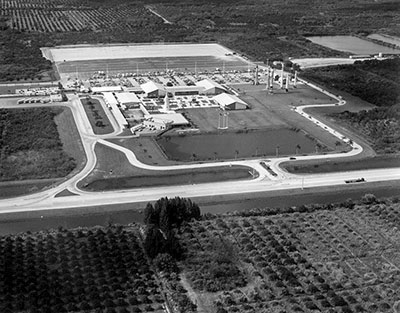 The visitor complex was started in 1967, when the space program was gearing up for the first moon landing. The first manned rocket, the Redstone, is on display, and features Alan Shepard, America’s first man in space.

One of the first things you see when you enter is the Rocket Garden, with many models of the rockets NASA has used over the years. You wander around in awe of their size, especially the Saturn, which sent astronauts to the moon during the Apollo program in the late ’60s and early ’70s.

Also near the entrance, adjacent to the Rocket Garden, is the Heroes and Legends exhibit, including the Astronauts Hall of Fame. The exhibit has a mixed media and video presentation that recounts the high points of the early NASA manned space efforts. From there you enter the Hall of Fame, which features pictures and bios of top American astronauts.

There is a mock-up of the original Mercury program Mission Control center. It looks small and technologically out of date compared to the large control centers at Kennedy and the Johnson Space Center in Houston.

The Journey To Mars exhibit is certainly timely. It includes a multimedia presentation on the missions to the Red Planet. There are mock-ups of the Mars rovers and a prototype model of what a future manned rover may look like. There are interactive games and simulators so you can test your skills to become a Mars explorer. 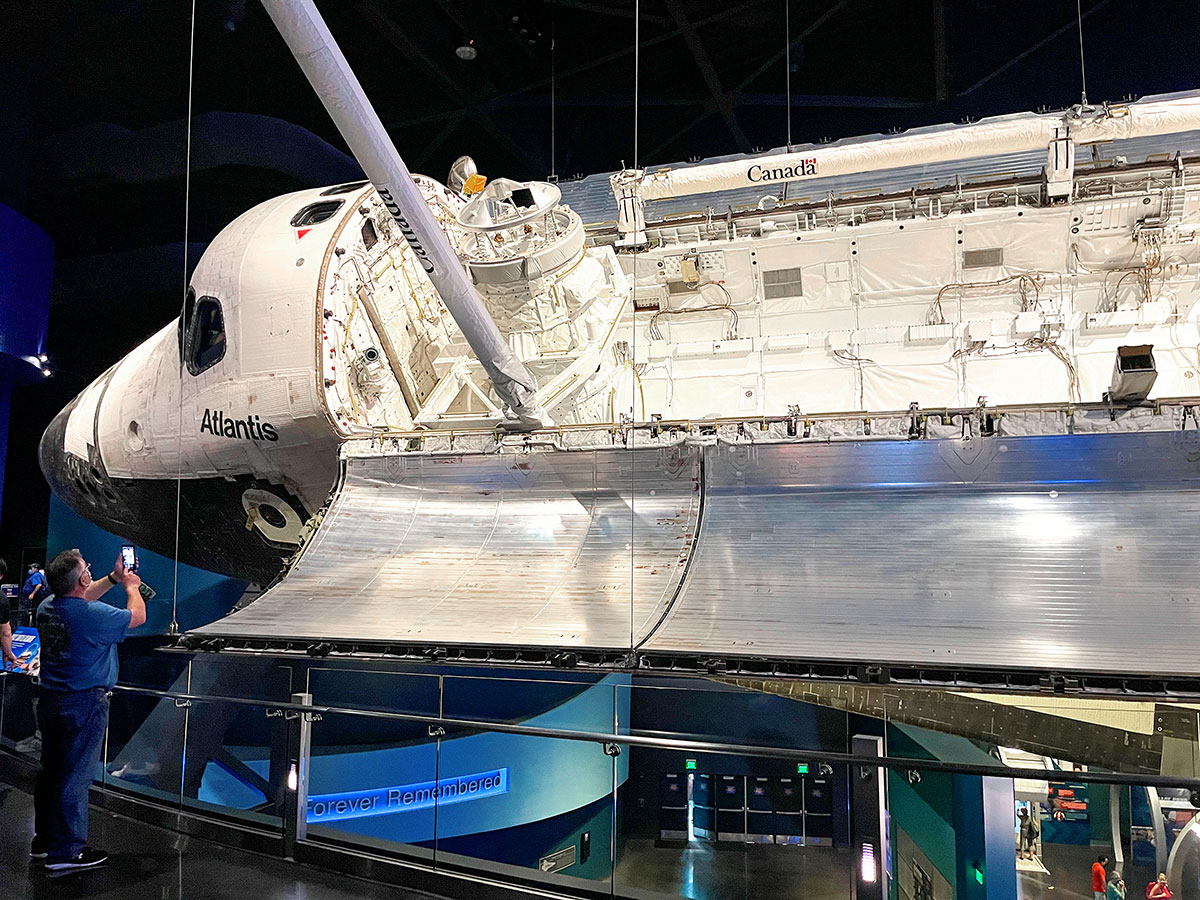 It’s a wonder on how the 4.5 million pound space shuttle Atlantis ever made it off the ground. 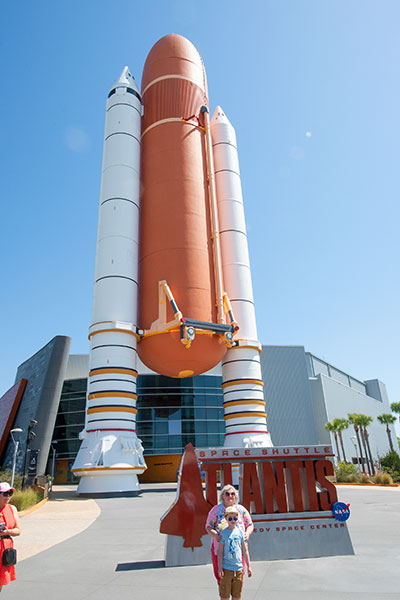 At the entrance to the exhibit featuring the space shuttle Atlantis is a full scale model of the rocket and external fuel tank used to launch shuttles into space.

The star of the show is the space shuttle Atlantis exhibit. At the entrance is a full scale model of the rocket and external fuel tank that were used to launch shuttles into space. Inside there is a giant screen video about the shuttle program, and leave it to NASA not to skimp on any details. The movie includes the double bang of sonic booms the shuttle always made on landing. At the end of the movie, the doors open to an exhibit room that holds the actual retired Atlantis shuttle. It’s an awesome site and you have to wonder how in the world did they ever get something that big off the ground and into space.

For the record, Atlantis is 122 feet long, 57 feet high and has a wing span of 78 feet. The whole thing weighed 4.5 million pounds at liftoff.

Kids get a thrill at being able to sit in a mock-up of an actual space shuttle cockpit in the Atlantis building. It makes for a great photo opportunity.

After you’re done looking in awe at Atlantis, there is an opportunity to get thrilled in the Shuttle Launch Experience, a simulation of an actual lift off of a shuttle. You get strapped into your seat and there is simulation of the actual shaking and g-forces experienced by the astronauts during a launch. The simulator has a warning for people who may experience motion sickness, but it isn’t really that bad, just a little shake and bake. Fun for everyone. 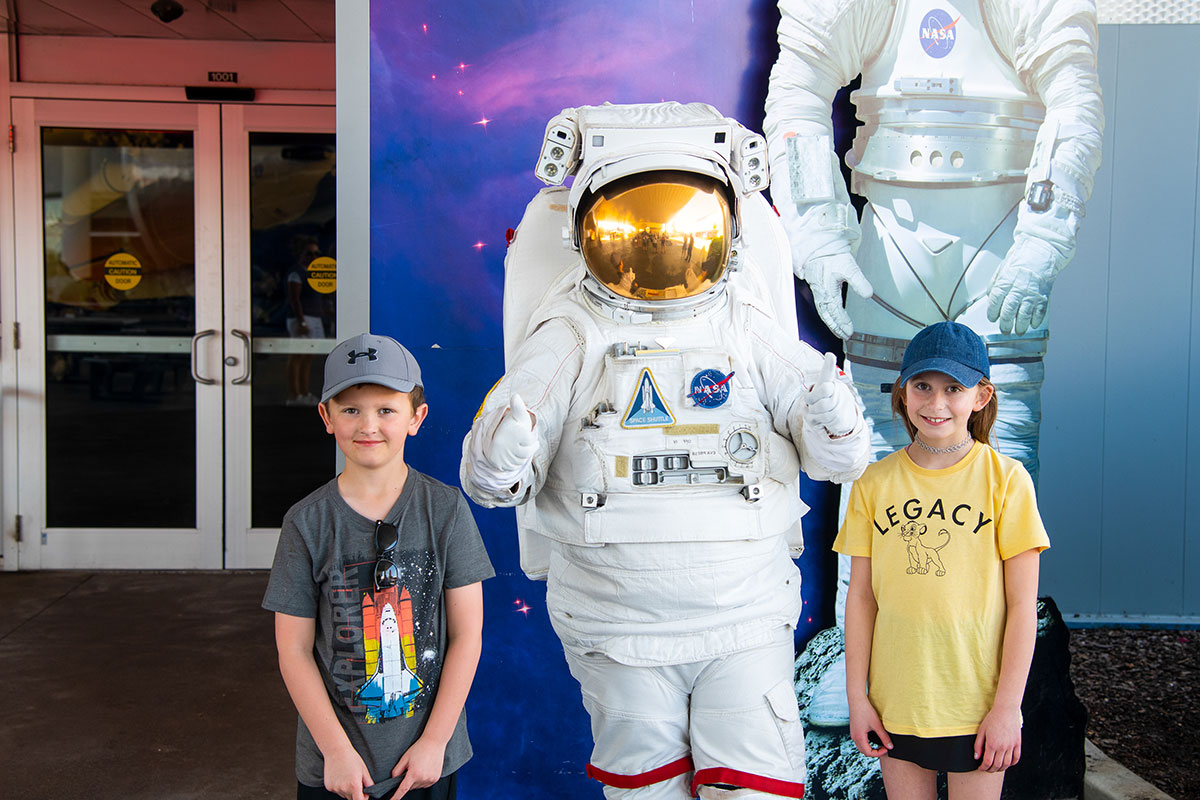 Children and adults can pose with an “astronaut” at the entrance
of the Mars exhibit.

A special treat for the kids is an opportunity to have their picture taken with an astronaut in a space suit. This takes place at the entrance to the Mars exhibit. The astronaut is there every hour to pose for pictures. No, it isn’t a real astronaut, but it’s fun and a great photo opportunity for kids nonetheless.

The Space Shop is the official gift shop of the complex. You will find T-shirts, jackets, models of rockets and shuttles, coffee mugs and all kinds of fun stuff for people of all ages. The shop is on two floors, with most of the children’s sizes on the second floor. Best to make this your last stop so you don’t have to carry packages around all day.

The IMAX theater has movies that are in 3-D, in addition to the huge screen. The main IMAX movie changes from time to time. On a recent visit, the IMAX was showing a new movie about asteroid hunters. It runs about 40 minutes and the surround sound and IMAX experience are breathtaking. There is also a shorter IMAX movie, Journey to Space, which is a permanent feature film. 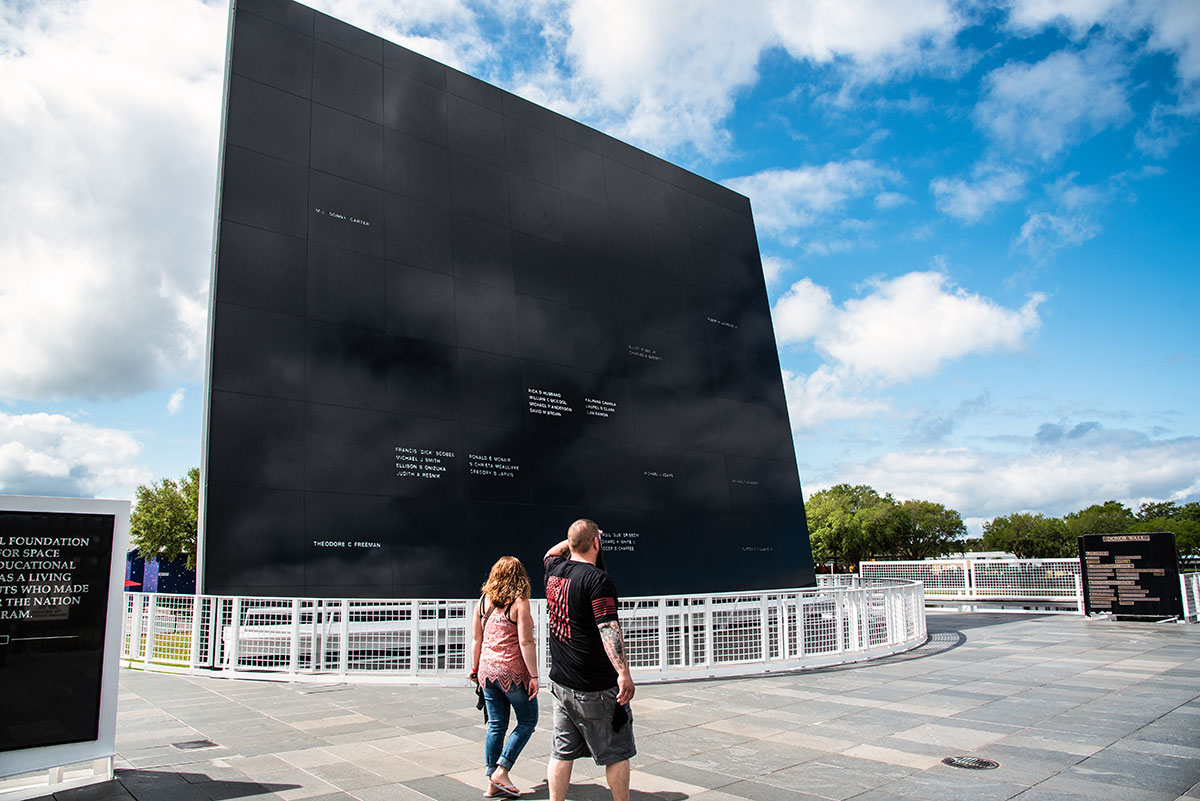 The Space Mirror is engraved with the names of all NASA astronauts who have died since the space exploration era began in the 1960s. 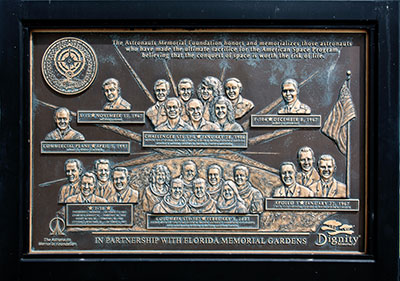 A brass plaque honors astronauts who died in Apollo and space shuttle years.

On a solemn note, take some time to visit the Space Mirror Memorial. The tall mirror contains the names of all NASA astronauts who have died in mission related accidents. This includes the crews of space shuttles Challenger and Columbia, and launch pad fire of Apollo 1. There are also brass memorial plaques engraved with the images and names of the deceased astronaut crews.

Universe Theater by Northrop Grumman takes you through the known history of the universe, some 13.4 billion years, and explores the heavens with images from the Hubble Space Telescope. It uses 3D 4K resolution images for deep space exploration via Hubble. There is also an exhibit for the new NASA James Webb Telescope, which is the replacement for Hubble.

The Astronauts Training Experience is an added fee, $175, and must be booked in advance. It allows guests to train, work and live in simulation to what the real experience would be on Mars. The training sessions run 4-5 hours, and include realistic simulations of launching, landing and walking on Mars.

Exhibits are always changing, updated to keep pace with the evolving nature of the space program. 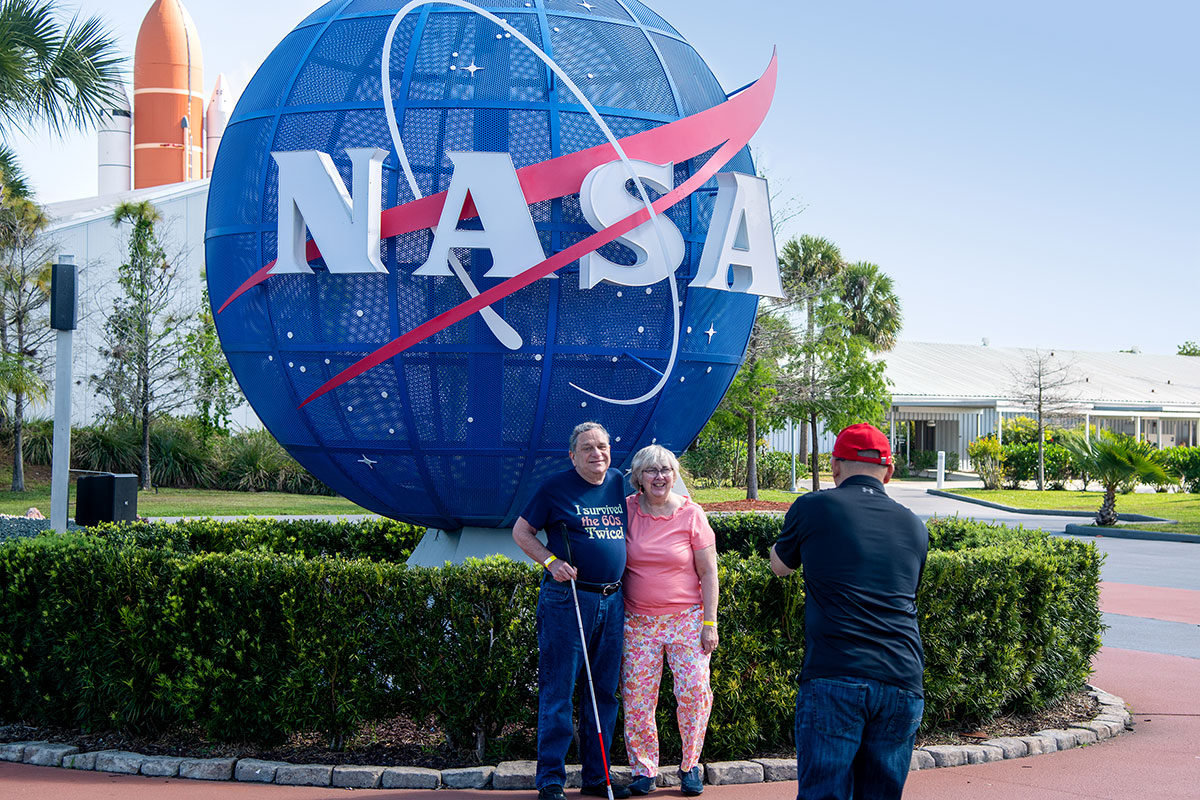 HOURS: The complex is open daily, 10 a.m. to 5 p.m. If you plan to hit all the exhibits, the IMAX movies and the Apollo/Saturn V tour, it makes for a full day. Even at that you won’t get to everything.

ADMISSION: $57 for adults, $47 for children. The best bet is to purchase tickets at https://www.kennedyspacecenter.com/info/tickets in advance of your visit. Once you are in the complex there are no additional charges for the exhibits.