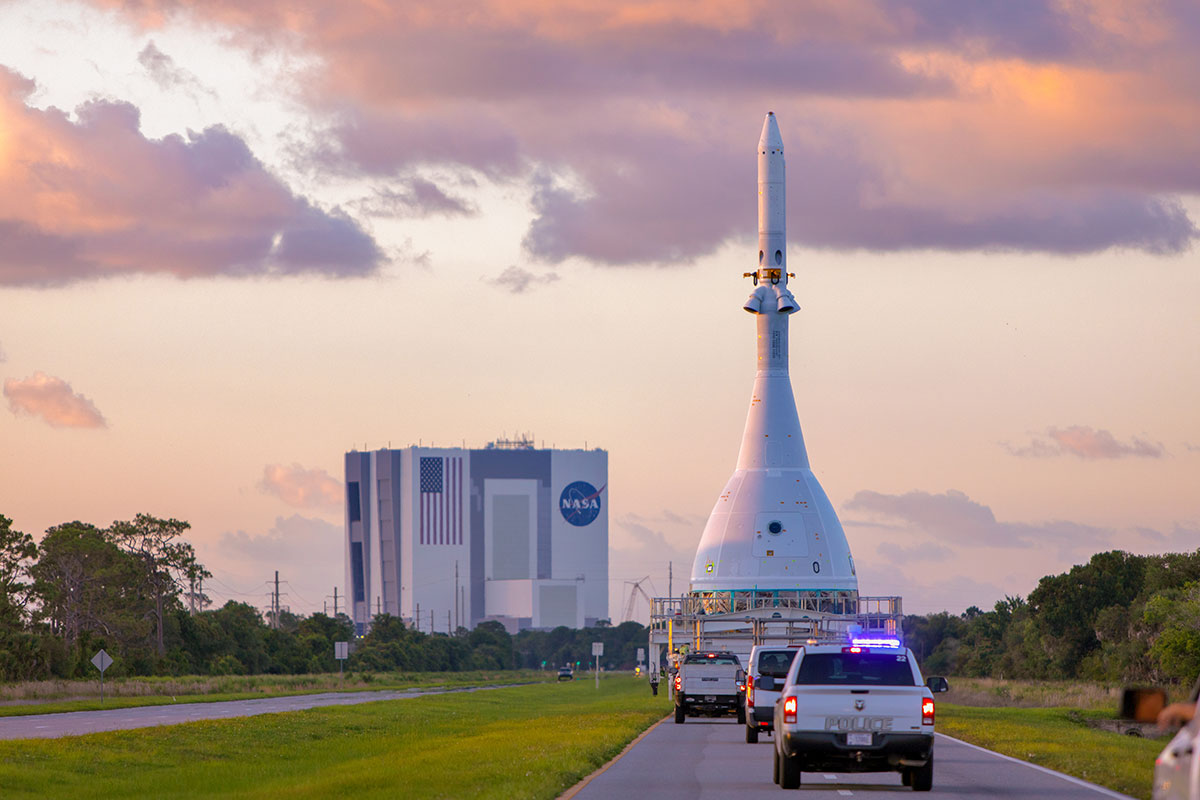 The Orion 1 capsule, designed by Lockheed Martin, heads toward the Vehicle Assembly Building at the Kennedy Space Center. NASA/LOCKHEED MARTIN

While Brevard County enjoys one of the most diverse economies in the country, it will always remain intrinsically connected to the economy of the space program and the Kennedy Space Center, which has significantly impacted the county’s ups and downs since its start in 1962. 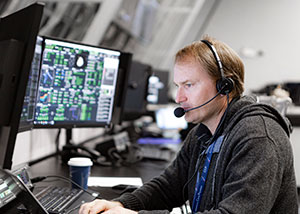 According to Space Florida, the state’s aerospace economic development agency, NASA generates jobs for 33,000 workers and financially impacts the Space Coast to the tune of $5.9 billion. Florida reigns supreme as leader in the global space industry in large part because of the concentration of space industry leaders that call Brevard County their launchpads.

Like a good marriage, the relationship between the space industry and the county has had its ups and downs but the two remain constant to each other as they face the next chapter of their lives.

“Space has been a legacy base, but what has happened is that it has diversified,” said Lynda Weatherman, president and CEO of the Economic Development Commission of Florida’s Space Coast.

“We were once essentially a launch location, but now we have launches, assembly of launch vehicles and payloads.”

Huntsville, Alabama, won the bid for the U.S. Space Command Headquarters, but Brevard continues to attract the space industry by pivoting quickly to meet the needs of these corporations.

“The time is right for us to locate our space headquarters where so much of our space history was made over the past six decades and where so much history awaits,” said Leanne Caret, former president and chief executive officer of Boeing Defense, Space & Security in 2019, when the company made the decision to relocate space headquarters from Arlington, Virginia, to Brevard.

“This storied Florida space community will be the center of gravity for Boeing’s space programs as we continue to build our company’s leadership beyond gravity,” she said. 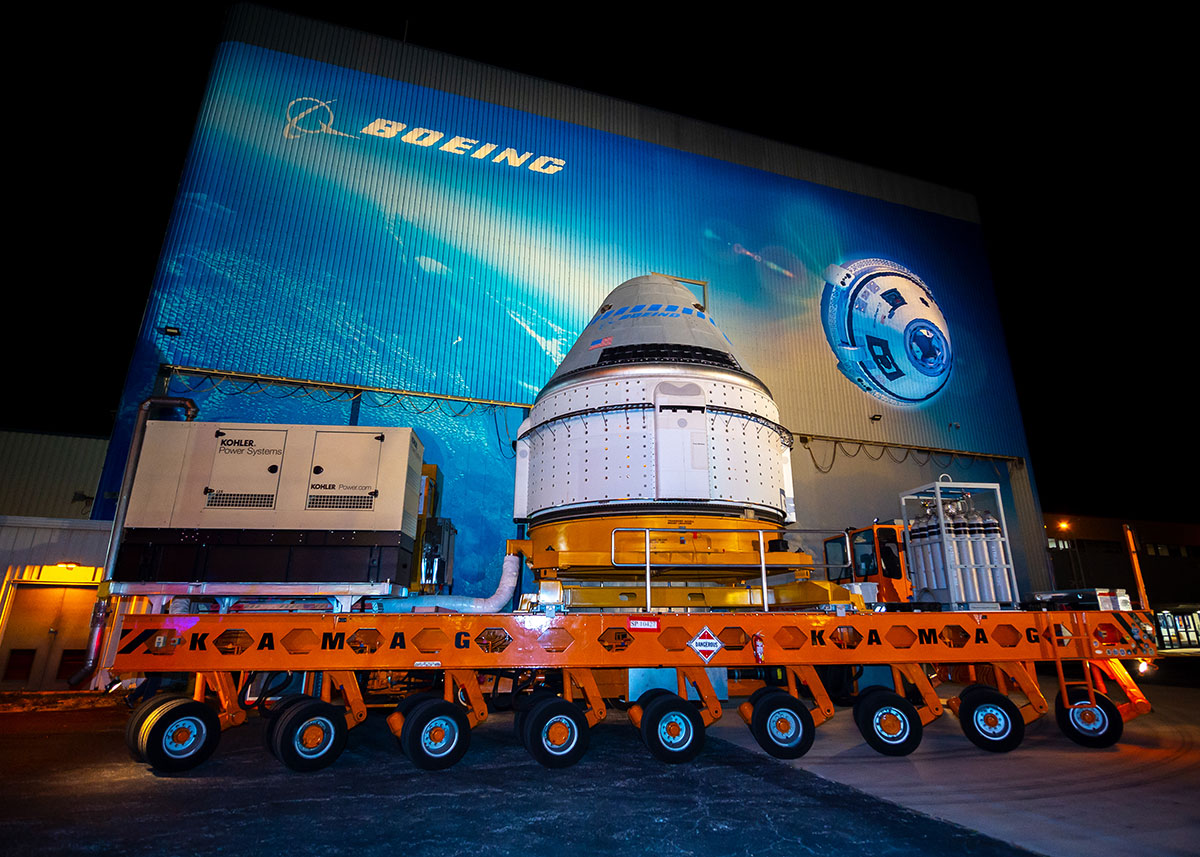 Boeing’s Starliner spacecraft will deliver and return with cargo from the International Space Station. NASA/BOEING

DAYS NOT SO HAPPY
Lessons learned were often hard. During the space shuttle program, Brevard thrived under NASA’s munificence. In 2008, the average salary for an on-site worker at Kennedy Space Center was, at $77,235, nearly double the county’s average wage at the time.

The good days were not to last, unfortunately.

The flight of space shuttle Atlantis in July 2011 marked the end of the program, and Brevard’s unemployment rate rose to 11.2 percent, more than one percentage point above the state average that year.

The end of the space shuttle era rippled through the economy, from restaurants to retail stores, but thanks to the efforts of the EDC and Space Florida, private companies interested in commercial alternatives took notice. The fact that Brevard was replete with a highly trained workforce, a proven infrastructure and a legendary connection to space could not be ignored.

SpaceX was one of the first to invest in the Space Coast with its Dragon, the uncrewed spacecraft that in 2012 became the first commercial endeavor to serve as International Space Station transport.

Blue Origin was not far behind, with the company creating more than 330 new jobs for its new rocket manufacturing facility. Jeff Bezos, Amazon CEO and Blue Origin founder, considered the choice a no-brainer. The talent was here and so was the interest.

“You want to go someplace that’s welcoming, that actually wants the company,” he said.

“The biggest factor, there is a talented workforce … that you could really hire people that understand the quality and demands of aerospace.” 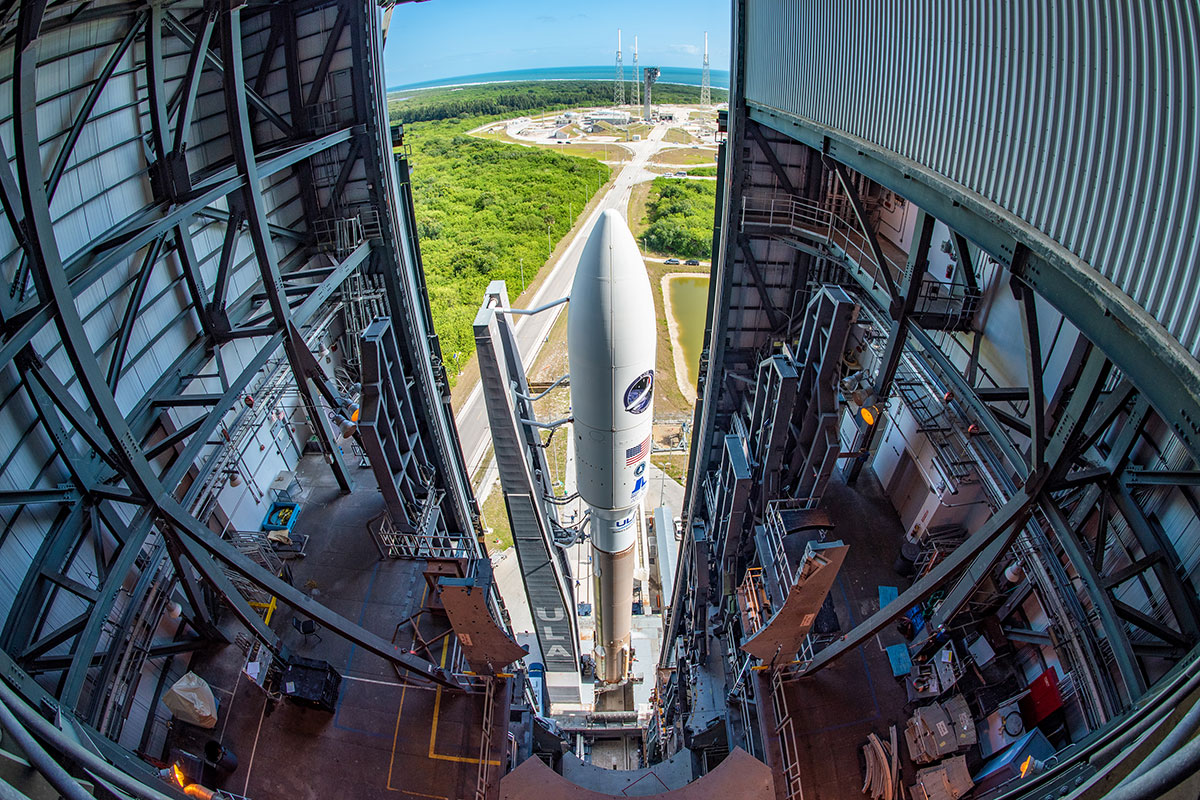 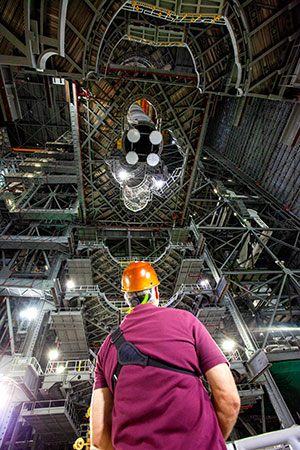 The Vehicle Assembly Building is the hub of activity at the space center. NASA

In a little more than a decade, business was back as usual as more industries, the likes of OneWeb, Boeing and Lockheed Martin, nurtured a rebound that has spread to all sectors of the economy.

Brevard’s revitalized connection with the space industry continues in orbit, and there is no chance of losing trajectory as space contractors continue choosing the Space Coast for their base of operations. Late last year, Gov. Ron DeSantis announced Terran Orbital’s decision to locate its commercial spacecraft and constellation facility on Merritt Island.

“Terran Orbital will be investing $300 million in the Space Coast to build the largest satellite manufacturing facility in the world,” DeSantis said.

The project is expected to create approximately 2,100 jobs with an estimated annual average wage of $84,000 by late 2025.

Terran Orbital’s new campus will enable the company to manufacture the satellite through its complete lifecycle from space vehicle assembly and printed circuit board assembly manufacturing to harness and cabling production and qualification and acceptance testing.

“Satellite manufacturing is and will continue to be an important part of the economy in the Space Coast, and with this announcement we are upping the ante,” DeSantis added. 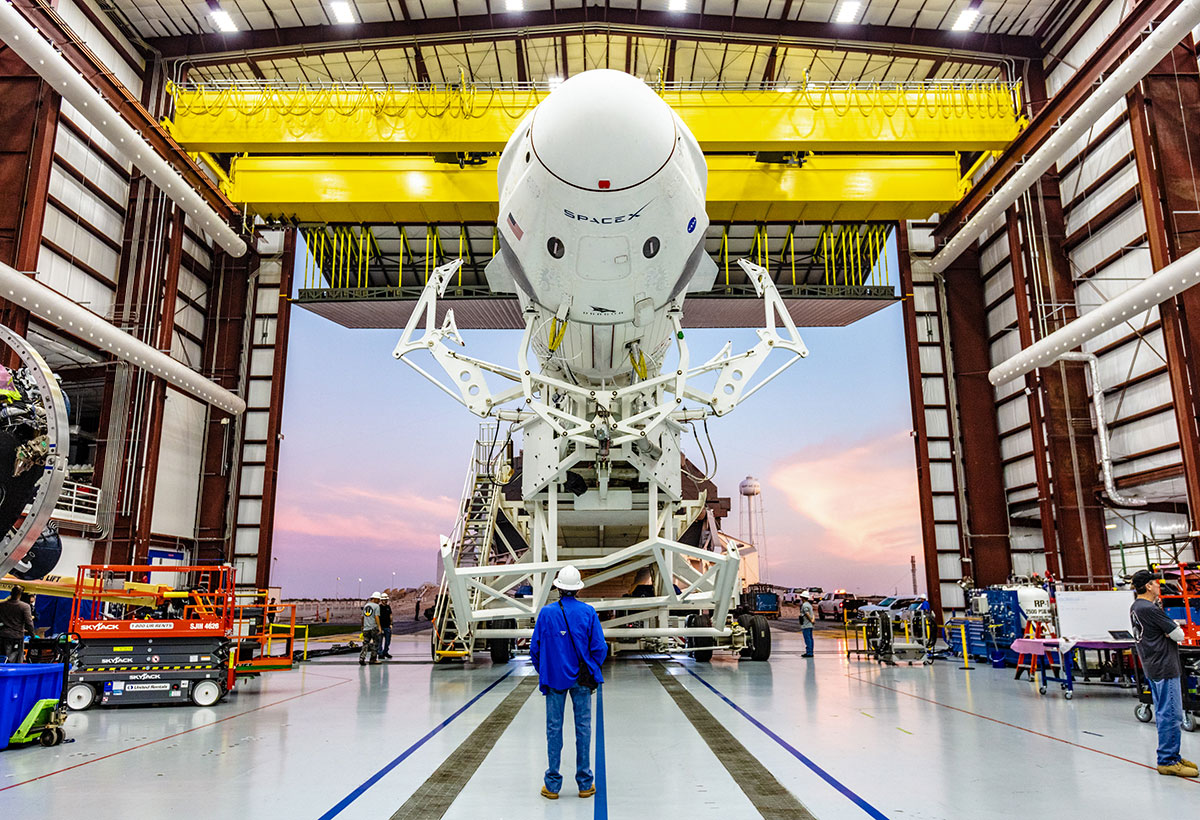 In May, Space X’s Crew Dragon returned to Earth after a successful six-month stay at the International Space Station. NASA/SPACE X

ALL-IN-ONE CENTER
Earlier in 2021, Lockheed Martin opened its Spacecraft Test, Assembly and Resource [STAR] Center at what was once the Astronaut Training Experience attraction in Titusville. Lockheed Martin assembles the Orion spacecraft for the Artemis I and II Moon missions at the nearby Neil Armstrong Operations and Checkout [O&C] building at NASA’s Kennedy Space Center. The addition of the STAR Center provides much-needed space for the new production phase of Orion, allowing future Orion spacecraft — starting with the Artemis III mission — to be built faster.

“The STAR Center is a spacecraft factory of the future and is the centerpiece of our commitment to build sustainable and affordable capabilities for NASA to send astronauts to explore the Moon and eventually Mars,” said Lisa Callahan, Commercial Civil Space vice president and general manager at Lockheed Martin Space. 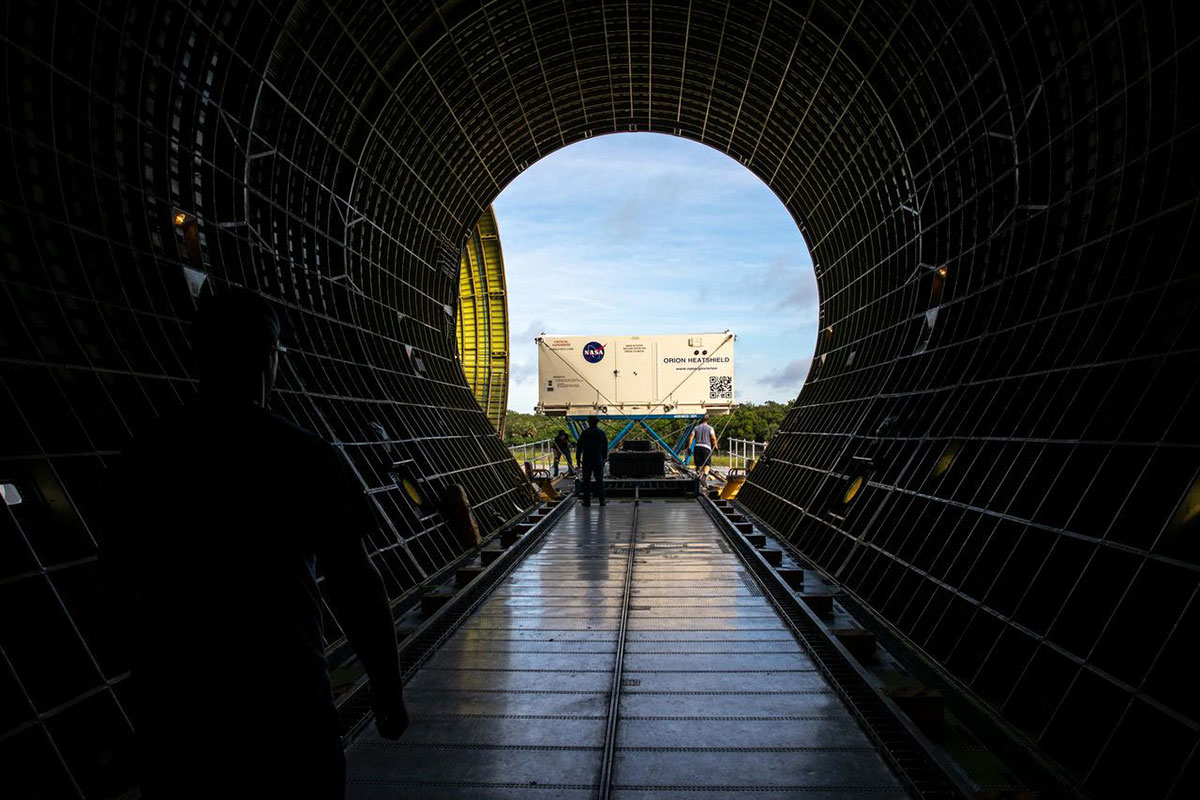 Orion’s heat shield, a critical element, protects the capsule and the astronauts inside during re-entry through Earth’s atmosphere, when temperatures can hike close to 5,000 degrees Fahrenheit, half as hot as the Sun. NASA/LOCKHEED MARTIN

“We are using advanced manufacturing capabilities and digital-first technologies to speed production and improve quality to get Orion from factory to space faster than ever before.”

There is a good reason The Washington Post called Brevard the Comeback Coast. Like the visionaries who launched America into space, the people of the Space Coast are far-sighted and enterprising.

“This is just the beginning,” said Jamal Sowell, state secretary of Commerce and the president and CEO of Enterprise Florida Inc., about Terran Orbital’s decision.

Sowell’s statement could also well apply to the future of the Space Coast.