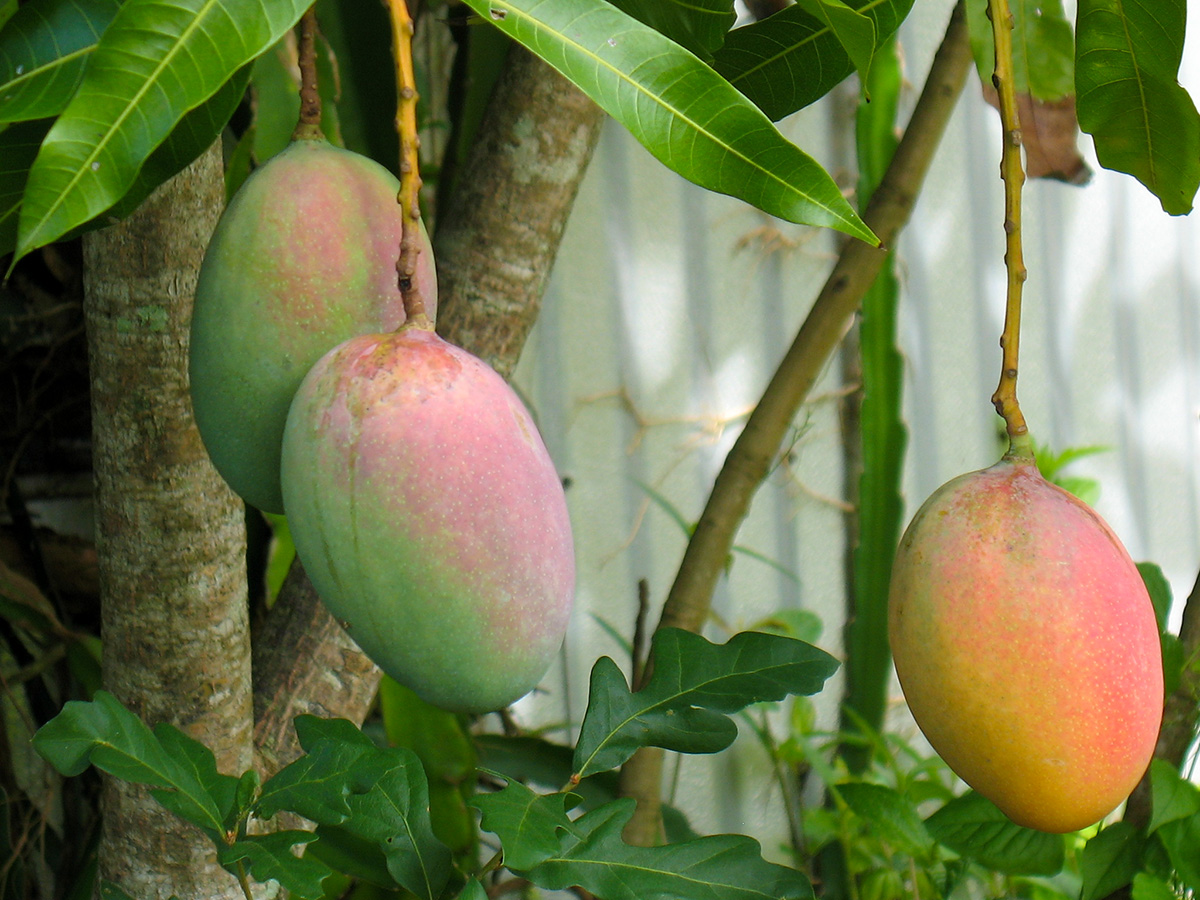 After canker and greening have made growing citrus extremely labor-intensive, Brevard home growers have turned to mangoes as a favorite crop. RON RINCONES PHOTOS

Asit Ghosh has no problem directing people to his home. 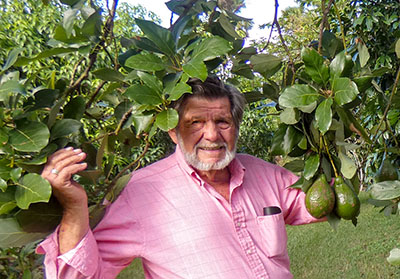 Jerry Hunt tends to approximately 700 fruit trees at his North Merritt Island homestead, but there is always room for one more. DARLEEN HUNT

He just tells them to look for the mango trees in his front yard.

In the Rockledge neighborhood where Ghosh lives, his front yard is singular, an oasis of mangoes. He estimates he has planted more than 71 trees, 22 of them mangoes, in his roughly third-of-an-acre lot.

Like many members of the Brevard Tropical Fruit Club, Ghosh feels there is always room for one more specimen. When he has run out of room, he’s been known to head to the North Merritt Island home of Jerry Hunt, club board member and a foster gardener for folks who just need a little more room to plant that next enticing variety they have to have.

“A lot of people have left trees with me,” said Hunt, who, with 5 acres plus a couple more less than a mile from his house, has plenty of room to plant.

Such is the attraction of tropical trees. Like potato chips, they are difficult to stop with just one.

At 82, Hunt oversees a spread of more than 700 trees. The nine goats and donkey that reside on land previously used for planting are Hunt’s only acknowledgment that he cannot commit to as many trees as he has in the past.

Fellow club member Ron Rincones knows how much work it takes to keep tropical trees thriving. Although he has 5 acres in Valkaria, Rincones only has 25 mango trees, three lychees, two longans, two sugar apples, four varieties of guavas, three varieties of figs, a soursop, a bacupari and a pomegranate.

“Taking care of these is almost more than I can handle, but this is a labor of love,” Rincones said.

When mango season arrives, Asit Ghosh has an abundance of luscious varieties, such as the Neelum, left, a hardy variety that fruits in August and continues producing until October some years. The fruit of the Loquat, right, is rich in fiber, vitamin A and antioxidants. 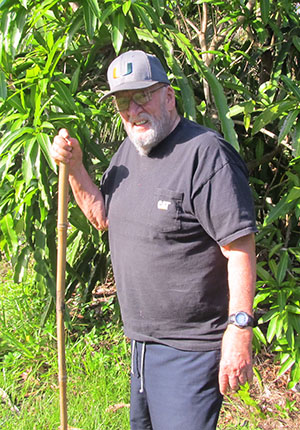 Ron Rincones is dead serious when dealing with anything that threatens his beloved tropical fruit trees, utilizing a vigorous program to eliminate the pests. NANCY RINCONES

Growing tropical fruit trees is a job with plenty of tragedies.

Brevard is in a subtropical climate, but in this county of transplants that seems to be close enough to a tropical climate. They move from Ohio, New York or Pennsylvania, and if there is a little land available, can’t resist the urge to plant trees that they dream will produce luscious fruit.

Many of the selections are not really suited to the vagaries of Space Coast weather systems, and promptly die. The good news, however, is that global warming may be helping trees that not long ago did not stand a chance.

“Half the stuff that I have in the yard now couldn’t grow in the weather of the 1970s,” Hunt said.

Even with the warmer temps, some trees are still doomed to die because they were not suited to Brevard in the first place.

“Check your USDA zone map for cold tolerance,” said Ghosh, who believes he may well be the northernmost large-score fruit tree grower on the mainland. “You also need to select trees based on the amount of sun exposure or lack of it in locations around the house.”

Cold temps are only one of many issues growers face. When Tropical Storm Fay hit in 2008, it took out all 4 of Hunt’s avocado trees, not because of the wind, but because of the rain.

“If the roots get saturated, they die,” Hunt said.

Water can indeed be a nemesis for fruit trees, but there is a simple way to fight it. Mound away, Hunt suggested.

“You have to mound everything you plant here, because the problem is too much water,” he explained. “People don’t plant high enough and don’t take into account that our water table has changed. If the roots stay in water too long, the tree won’t grow.”

Love for sprinkler systems can hurt more than help. 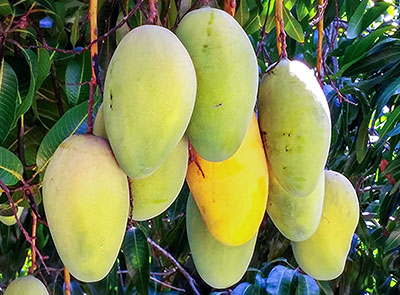 Valencia Pride mangoes, which can be found in Asit Ghosh’s Rockledge yard, originated in Miami. The popular quick-growing mango earns fans with its abundant production of excellent fruit. ASIT GHOSH

“The saltiness in deep-well water causes leaves to wrinkle and turn brown,” he said. “The answer is to cut back on sprinkling if that happens.”

Then there is the vermin. Dealing with that issue can be time-consuming. Ghosh plants enough mangoes so the squirrels that descend upon the new fruit will only make a dent in the crop. Rincones, on the other hand, spends considerable effort getting a bead, literally, on the raccoons that threaten his crops.

“I have a vigorous program to eliminate pests, which I will leave to your imagination,” he said.

That’s not counting the bugs, which Rincones counters with biological insecticide Spinosad, plus Organocide, Neem Oil and a soap solution of six drops per quart of Dr. Bronner’s peppermint soap.

Yet, despite all the hassle, growers keep on growing, as the thriving membership of the Brevard Tropical Fruit Tree Club attests.

The club was established by local fruit lovers who wanted to share their experiences. Hunt, who has been growing tropical trees since 1977, was one of the first to join.

After all these years, Hunt feels membership remains beneficial. The club, part of a national alliance of tropical and rare fruit councils, hosts monthly meetings and seminars that feature speakers who have a plethora of tree-growing topics. Perhaps more importantly, members love to share their bounty with each other.

Club members exchange seeds, cuttings, grafts and young trees to make fruit trees readily available and to encourage everyone to grow edible landscaping plants. Many of the members are specialists in specific varieties of fruit trees. Hunt, for example, will prepare for a meeting by digging out plants he can spare to give to other club members.

Annual fees of $15 for individuals and $25 for families make the club a bargain, since it also hosts free bus trips to Florida gardening hot spots and members receive discounts and first dibs on the yearly fruit tree sale, an event that on the fourth Saturday in April features more than 3,000 tropical trees for sale at Melbourne Auditorium.

Even with 700 trees, Hunt finds it difficult to say no to falling for at least one of the trees in the sale.

“I love them all and want all of them,” he said.