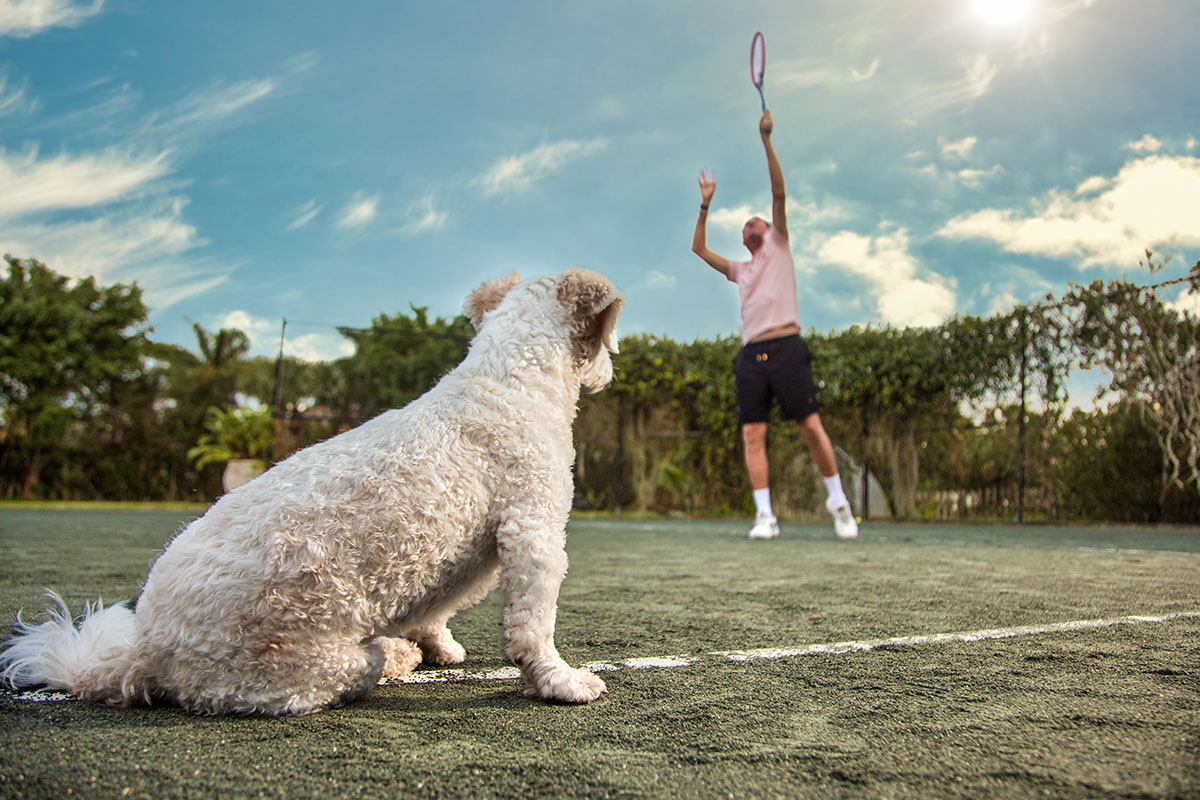 It’s just another day at the office for Brevard tennis pro Mark Harrison, who teaches the sport from his court behind his Lake Washington home. 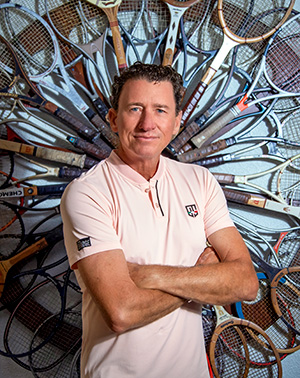 Harrison divides his year between Brevard County and New York’s Hamptons, where he is director of tennis at the ultra-exclusive The Bridge. JASON HOOK

It’s just another day at the office for Yorkshire terriers Max and Bear as their owner Mark Harrison readies for work.

The office for this trio is the tennis court in the back of Harrison’s Lake Washington home, where he teaches the fine points of tennis to aspiring players while the teeny terriers watch intently.

Rockets fly along the Space Coast, but so do tennis balls, and plenty of them. The area is tailor-made for the sport and professionals like Harrison are all too happy to help students of the game hone their skills.

“Tennis in Brevard is popular and thriving,” Harrison said. “Brevard is very much a tennis town.”

Harrison’s story reflects the degree of passion for the sport found in so many local players, be they amateurs or pros.

“I started playing tennis when I was seven with my dad,” he said. “I loved it from the beginning and wanted it as a career.”

Harrison’s father, who at 80 still plays tennis twice a week and is also a scratch golfer, went so far as to build a tennis court in the backyard of their West Melbourne house.

By age 9, Harrison was competing in tournaments. At Palm Beach State College, where he went after graduating from Melbourne High, he earned All-America designations in singles and doubles. Harrison’s pro highlights include 17 United States Tennis Association national titles and the No. 1 ranking in Florida singles and doubles. 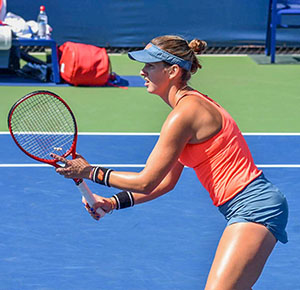 Californian Maria Sanchez, a former Women’s Tennis Association top 100 player and No. 1 player at the University of Southern California, could have lived anywhere, but chose Brevard, where she teaches at Eau Gallie Yacht Club. MARIA SANCHEZ

A member of the Space Coast Sports Hall of Fame, Harrison won the USTA national at Forest Hills. He has represented the United States in competitions throughout the world and continues to do so, even though he has an active teaching career in Melbourne and at the Hamptons, where, from Memorial Day to Labor Day, he is director of tennis at the ultra-exclusive club, The Bridge.

“It is safe to say the Hamptons is one of the most desirable tennis markets in the world,” he said. “I’ve been playing and coaching tennis for almost 40 years here and in the Hamptons for 20 years. I am so grateful God put tennis in my path.”

“The finest tennis player produced from Brevard is Normal Holmes Jr., who is very well-known in the tennis world, yet extremely modest about all of his tennis accomplishments,” Harrison said.

Holmes, who competed against superstars such as Jimmy Connors, Bjorn Borg and Rod Laver, lives in Melbourne and continues to represent the United States in international tennis events.

California native Maria Sanchez, former Women’s Tennis Association top 100 player and No. 1 player at the University of Southern California, could have lived anywhere, but chose Brevard, where she teaches at Eau Gallie Yacht Club.

“After college, Chris Evert invited me to her academy in Boca,” Sanchez explained.

From Boca Raton, it was just a hop to the Space Coast, where Sanchez often played pro tournaments at Kiwi Tennis Club.

“I made good friends, loved it here and decided to move to Satellite Beach,” Sanchez said. 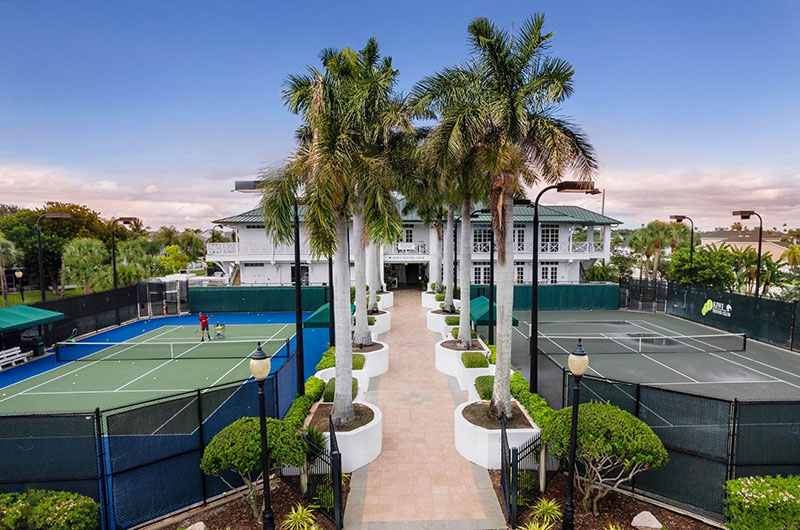 Kiwi Tennis Club’s affordable membership tiers, a robust training program and a slate of tournaments and exhibition games have greatly benefited the development of tennis on the Space Coast. 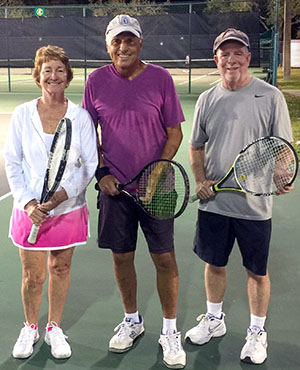 A significant number of tennis players has played at the popular City of Melbourne’s Fee Avenue municipal courts. CITY OF MELBOURNE PHOTOS

Whenever tennis is discussed in Brevard, the subject of Kiwi Tennis Club and its important influence on the tennis scene invariably comes up.

“Why don’t we build a tennis club?” Scott asked. And they did, naming the club after Lillie’s and Scott’s fathers’ New Zealand roots.

Unlike many clubs, Kiwi is inclusive, not exclusive, with 37 membership tiers that make tennis realistic for most budgets.

“There is no exclusivity and that is by design,” Scott said. “It’s unusual.”

Kiwi’s affordability, its significant social component, its training programs and its robust slate of tournaments and exhibition games has greatly benefited the sport’s development.

“Ed Scott has done a huge service for our county,” Harrison said.

Scott has the land and wherewithal to have a private tennis court in his backyard, but he still prefers traveling a half-hour from his home for the camaraderie that playing at Kiwi offers. Members can call to schedule court time and set up matches with other players. Strangers quickly become friends on one of Kiwi’s nine clay and four hard surface courts.

Tennis at Kiwi is more than just a game. It’s a way of life. Kiwi’s Courtside Café and the Breezeway Bar also do their part in promoting the sport. Open to the public, they attract a clientele eager for a dinner-and-show experience, with a locally sourced menu framed by a lively vista of tennis in the background.

“Our members thrive off the social component,” Joey Jones, Kiwi’s director of tennis, said. “It’s a very big part of what we do.”

Jones, who started Kiwi’s highly successful junior program, has worked with some of the top juniors in the county, according to Harrison.

Harrison also trains the next generation of players. With fellow pro James Clark, Harrison coaches at Holy Trinity Episcopal Academy, which boasts approximately 60 students who compete and hold their own against tennis players from top South Florida schools such as St. Andrew’s in Boca Raton and Gulliver Prep in Pinecrest.

Municipal courts that include Fee Avenue in Melbourne, Singleton in Titusville, DeSoto in Satellite Beach, Viera Regional Park and the City of Cocoa Beach’s Racquet Club, among others, provide easy access for players young and not so young.

Both Harrison and Jones coach David Bender and anticipate great things from the young player.

“He is the top-ranked 10-year-old in America,” Harrison said.

“For 10 years, he had the most players in USTA Junior Team Tennis in Florida,” Harrison said. “He helped start the program in the early ’80s.”

Municipalities and the public school system also do their part to keep those tennis balls flying over nets in Brevard. Most players, including Jones and Harrison, at one time or another played at the Fee Avenue courts in Melbourne. The popularity of those courts continues.

“Over the last year we have averaged 256 tennis players per week and 15 to 20 classes per week,” recreation superintendent Randy Dunton said.

Municipal courts, including Singleton in Titusville, DeSoto in Satellite Beach, Viera Regional Park and the City of Cocoa Beach’s Racquet Club, among others, also keep tennis easy to access. High school tennis teams, such as the Satellite High team coached by Jim Crane, sharpen their skills on the public courts.

“Last year, Satellite High made it to the finals of the boy’s high school state tournament and that is an enormous accomplishment,” Harrison said.

Watch for these two young players from Kiwi Tennis Club 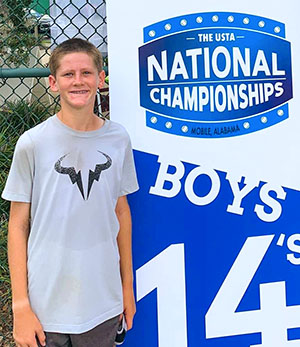 • Jack was featured on Spectrum Sports on Channel 13 for his tennis accomplishments;

• Has played at Kiwi since he was 5 years old; and

• Currently No. 1 among the 10-and-under players in Florida;

• Champion of the 10-and-under division of the Bobby Curtis Championships;

• Top five in the nation in the 10-and-under category