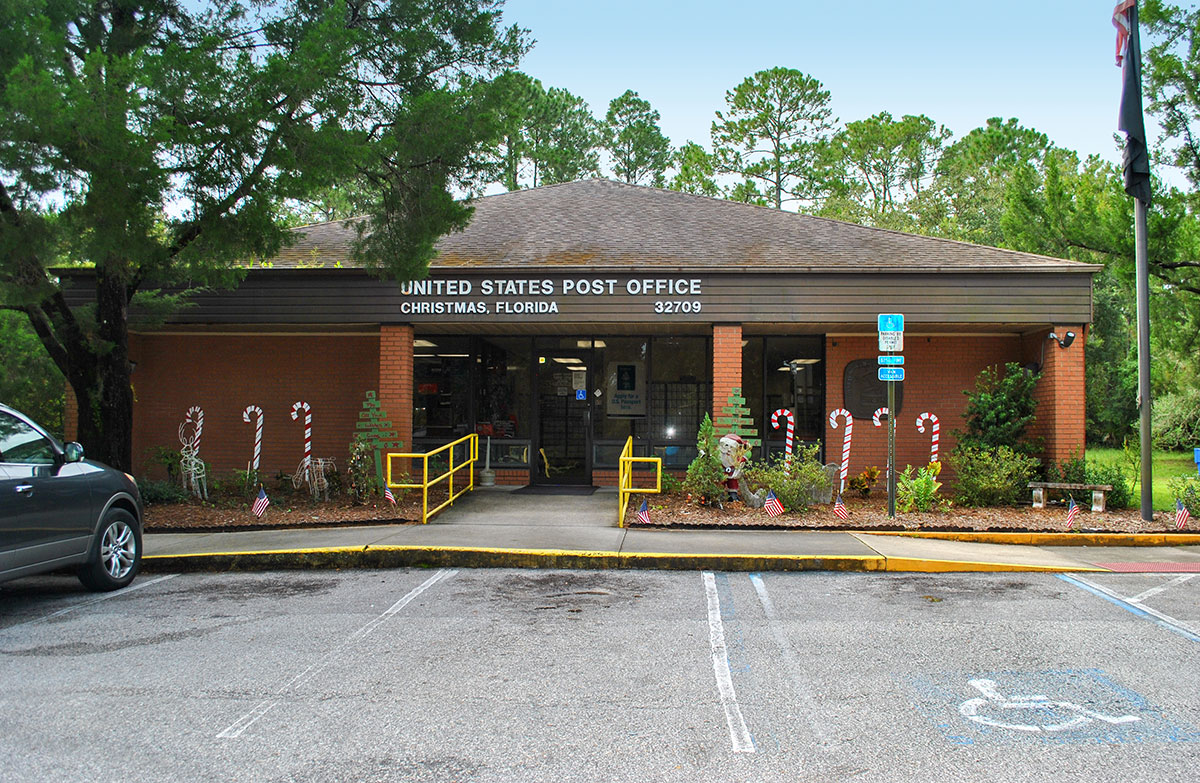 Foot traffic at the Christmas Post Office, which is decorated year round, quadruples right after Thanksgiving but postal workers are able to manage the crowds efficiently.

Tiny community puts its own stamp on thousands of holiday greetings 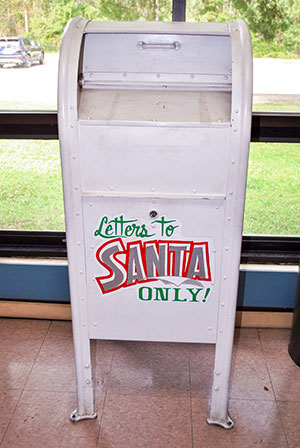 A special box is provided for letters to Santa. If mailed early, they are answered from Christmas. KERRY FIRTH

The tiny community of about 1,100 people with a year-round Christmas spirit is where State Road 50 intersects County Road 420 [Fort Christmas Drive]. It’s hard to miss the intersection as it’s graced with a 35-foot Christmas tree, a concrete Santa statue, red wooden sleigh, reindeer and a Nativity scene, which has rocks from every state in the manger.

A sign on the corner says “The permanent Christmas tree at Christmas Florida is the symbol of love and good will; the Christmas Spirit every day, every year.” Cupid and St. Nicholas avenues are the main roads through the residential Christmas Park neighborhood with side streets named after Santa’s reindeer, Rudolph, Dasher and Blitzen.

On the north side of the intersection is the small brick post office tucked among the shaded oaks and palmettos but very distinctive with its year-round Christmas décor. Tens of thousands of people visit the Christmas post office each year to have their holiday greetings stamped with the official Christmas postmark — a very coveted stamp any time of year and particularly during the holiday season.

ALL IN THE FAMILY 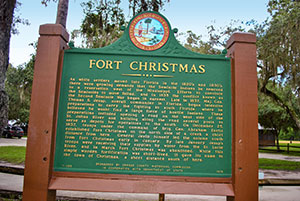 The tiny town of Christmas is named after the U.S. Army fort, which was built in three days during December 1837 to supply troops fighting in the Second Seminole War.

For more than 60 of those years a member of the Tucker family was in charge.

According to the Orange County Regional History Center, Lizzie Tucker got the job in 1916, taking over from her husband, Andrew; and their daughter-in-law, Juanita, took over in 1932 and stayed on the job for more than 40 years, retiring in 1974. [She died in May 2008 at the age of 101.]

In 1937, the Tuckers moved postal headquarters to a one-story white framed building with a small porch. The post office was always the one place people could go to get information and help and a welcome gathering place for residents. Juanita Tucker was the guiding force behind the holiday theme and for years the three rooms of the post office were jammed with hundreds of artifacts sent from all over the world.

The 1937 building was retired about the same time as Juanita and moved across the street to the Peace Garden where it served as a museum for decades. Around 2018, the 1937 post office building was moved farther north into the Fort Christmas Historical Park where it is undergoing renovation.

Today’s Christmas postmaster is Dawn King who has been on the job for nearly 15 years.

“Our special Christmas cancellation generally starts the first day of December and runs through Christmas Eve,” she said. “The earlier you can get your letters and cards in the better, because even if we are stamping them Christmas Eve your intended recipient won’t get it by Christmas Day.” 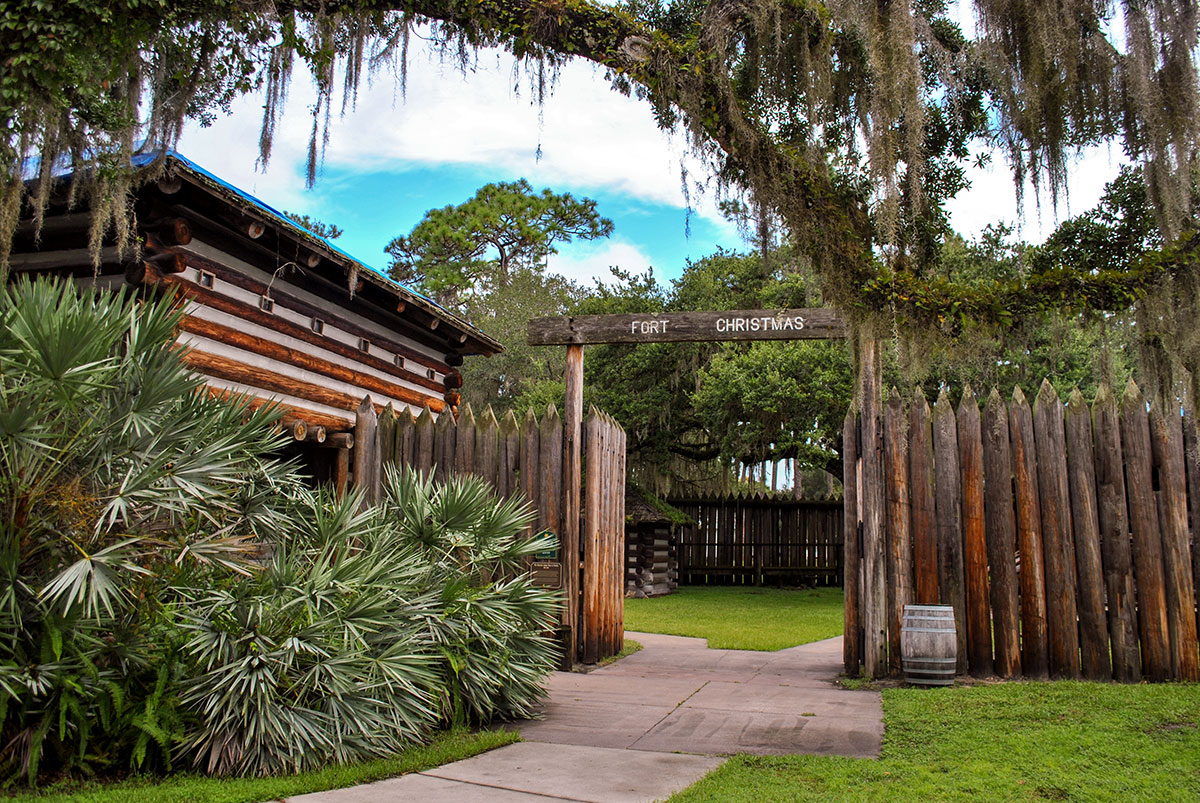 A replica of the fort was completed in December 1977, exactly 140 years after it was first built by the Army.

BUSY TIME OF THE YEAR 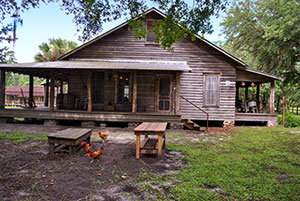 The 1917 Beehead Ranch house is part of the pioneer village at Fort Christmas Historical Park.

King says the foot traffic at the small post office quadruples right after Thanksgiving but they are able to manage the crowds efficiently. For those who want a decorative stamp with a catchy saying like “it’s always Christmas in Florida” in addition to the postage cancellation imprint, postal employees will happily supply customers with a stamp and inkpad to hand stamp their envelopes. Usually, a driver’s license is required as collateral to prevent the coveted Christmas stamps from disappearing.

“We have a lot of people from all over the world who mail packages of pre-addressed, postage paid greeting cards here to have them postmarked from Christmas,” King continued. “Most people send it to our address [23580 East Colonial Drive, Christmas, Florida, 32709] in a priority box or envelope and we will postmark it from Christmas, Florida. All they have to do is pay the additional postage to get them to us.”

Santa has his own mailbox at the post office and if you get your letters in early enough they will be answered. You can also go to www.usps.com and find an Operation Santa link for those who want Santa to answer their letters.

King explained that the Postal Service is hiring for more than 40,000 seasonal positions nationwide as preparations continue for the organization’s peak season for mail and package deliveries.

“It’s part of our delivering for America plan through which the Postal Service is investing $40 billion over 10 years in infrastructure and its employees,” said King. “And yes, we will have an additional employee here to handle the demand.” 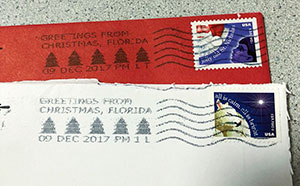 People worldwide send their greeting cards to be stamped with the coveted Christmas cancellation.

FOUNDED ON DEC. 25
So how did Christmas get its name? The country was in the midst of the Second Seminole Indian War and on Dec. 25, 1837, a force of 2,000 U.S. Army soldiers and Alabama volunteers arrived to construct a supply depot for the soldiers working the countryside.

The complex, consisting of two 20-foot-square blockhouses surrounded by a pine thicket, was constructed in just three days. A company of about 80 soldiers remained at Fort Christmas as the war progressed with military action southward. As a result, the supplies were no longer routed by land, but by ship to Fort Jupiter at Jupiter Inlet. Just three months later, in March 1838, the fort was abandoned and it eventually deteriorated. Nothing remains of the original structure.

In 1976, as a bicentennial project, Orange County Parks and Recreation Department, with the support of the Army Corps of Engineers, began a full-size replica of Fort Christmas in the county park less than a mile from its original location.

The new fort was completed in December 1977, exactly 140 years later. A small museum within the fort showcases military, Seminole Indian and pioneer artifacts dating from the Seminole War period, including weapons, clothing, tools and household appliances.

In May 1990, the Fort Christmas Historical Society was formed with a goal of creating a living history settlement within the park. One can walk back through time visiting eight pioneer Florida Cracker homes built in the 1870s to the 1930s.

They have been lovingly moved from their original locations to the park, restored and furnished with authentic and reproduction period pieces. You can also visit a 1906 school and its lunchroom, and a pole barn housing antique farm equipment. Of course, no visit to the settlement is complete without taking a photo by the community outhouse. 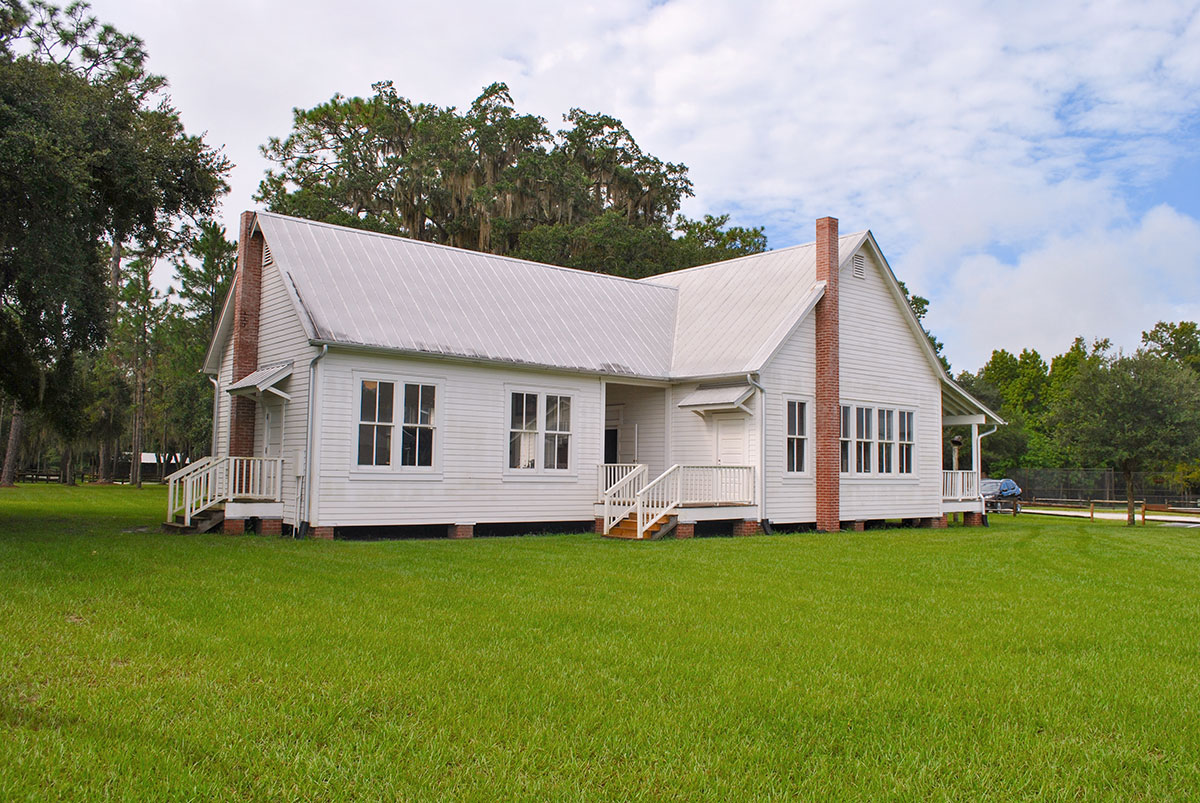 The Union School, circa 1906 later became Christmas Elementary in 1969.

A CRACKER CHRISTMAS
More than 40,000 people typically visit Fort Christmas during the annual Cracker Christmas celebration at the park during the first weekend in December. The Fort Christmas Historical Society plans to hold the popular event this year on Dec. 4-5.

Visitors can experience Christmas past with pioneer demonstrations, handmade crafters, barbecue and camp fire cooking and a variety of food and gift vendors. The settlement will be decorated like it was at the turn of the century so bring the whole family to experience what Christmas was without plumbing, electricity and dollar stores.

The event is free and the park is open from 10 a.m. to 4 p.m. Saturday and Sunday. To make sure the event is being held this year, check www.OrangeCountyParks.net, or call 407.254.9312 because it was canceled last year due to COVID-19.

Even if you can’t come to Cracker Christmas, it’s worth a side trip to visit the tiny town with the big Christmas spirit. Christmas and the Fort of Christmas Historical Museum is just 16 miles west of I-95 and 20 miles east of Orlando on State Road 50.

And don’t forget to send your Christmas cards early to have them stamped with the cherished Christmas postage stamp. Your friends will be amazed that you’ve located the southernmost branch of the North Pole operation.