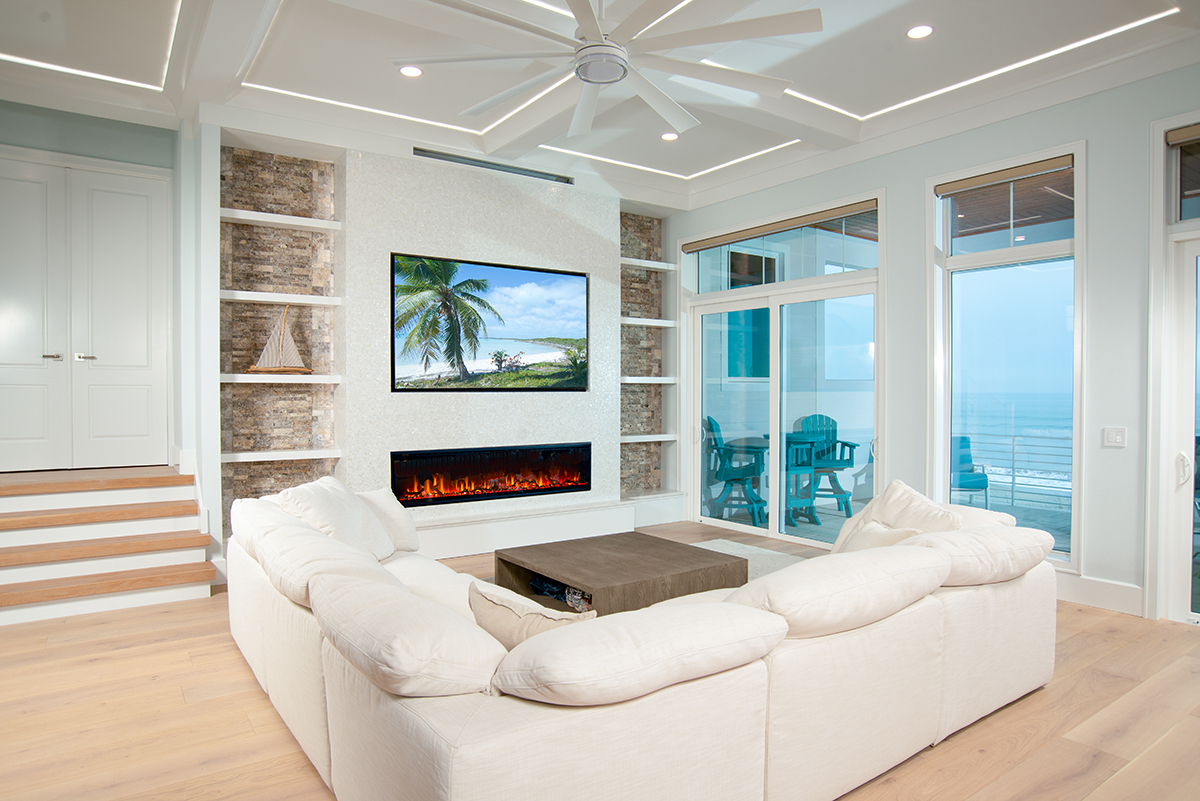 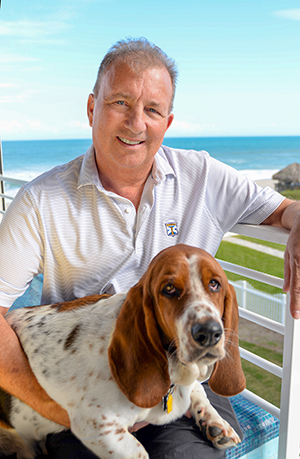 In the courtyard of Bob Bratt’s new retreat by the sea in Indialantic, a compass rose features prominently.

“He has wanderlust, so the compass rose is here so he can always find his way home,” designer Renee Clary said jokingly.

Not that anyone would really need a reminder to come back home, given the awe-inspiring amenities in the house that Clary’s brother, Charles Clary, built.

The project, set on a highly precious acre of beachfront property, is truly a family affair for the Clary Construction team. Charles realized his sister’s creative designs after their dad introduced them to the client just weeks before the elder Clary passed away.

“We were all born on the job site,” Renee said.

Steering Bratt to the brother-and-sister team proved a wonderful gift, for it is one builders and designers have dreams about.

“He gave us the project and let us do what we believed was best,” Renee said. 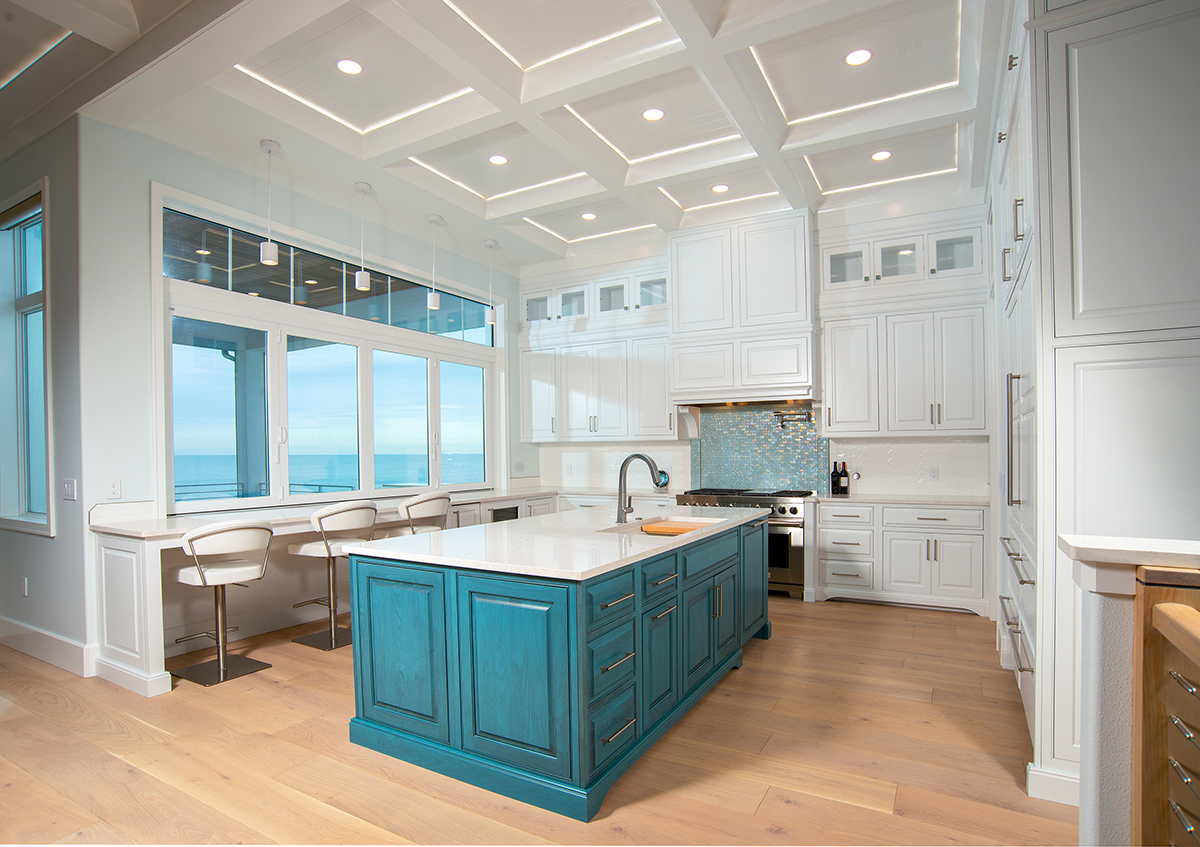 Everything, including the kitchen sink, faces the water in the magnificent space anchored by a teal kitchen island.

ONE OF A KIND
The result is a home as unique as its owner, an active bachelor who globe trots with his trusty basset hound, Tito, always by his side.

An unobtrusive entrance to the right of the grand front door reflects the home’s unexpected pleasures. Open this door and you are in paradise, for the pool and entertainment complex awaits.

Beyond eye-grabbing, the shower serves an important purpose. With an adjoining pump house that even incorporates an ice machine to keep guests’ drinks cold, the shower effectively blocks the view of the neighbor’s air conditioning unit and garbage utility area, directing the eye to the ever-changing seascape.

As with every room in the house, the pool’s seating and lounging areas face the ocean.

“That’s what you pay the big money for,” Charles Clary said.

Five perfectly matched palms stand as pool sentinels, each anchored by a square of blue glass stones. Looking closer, it is apparent their uniformity is not by chance. They are facsimile palm trees Renee discovered from a Pennsylvania manufacturer and will remain forever green, forever perfect, with nary an errant frond to sully the scene.

“If you had five real trees, they would grow at different rates and disrupt the design,” she explained. 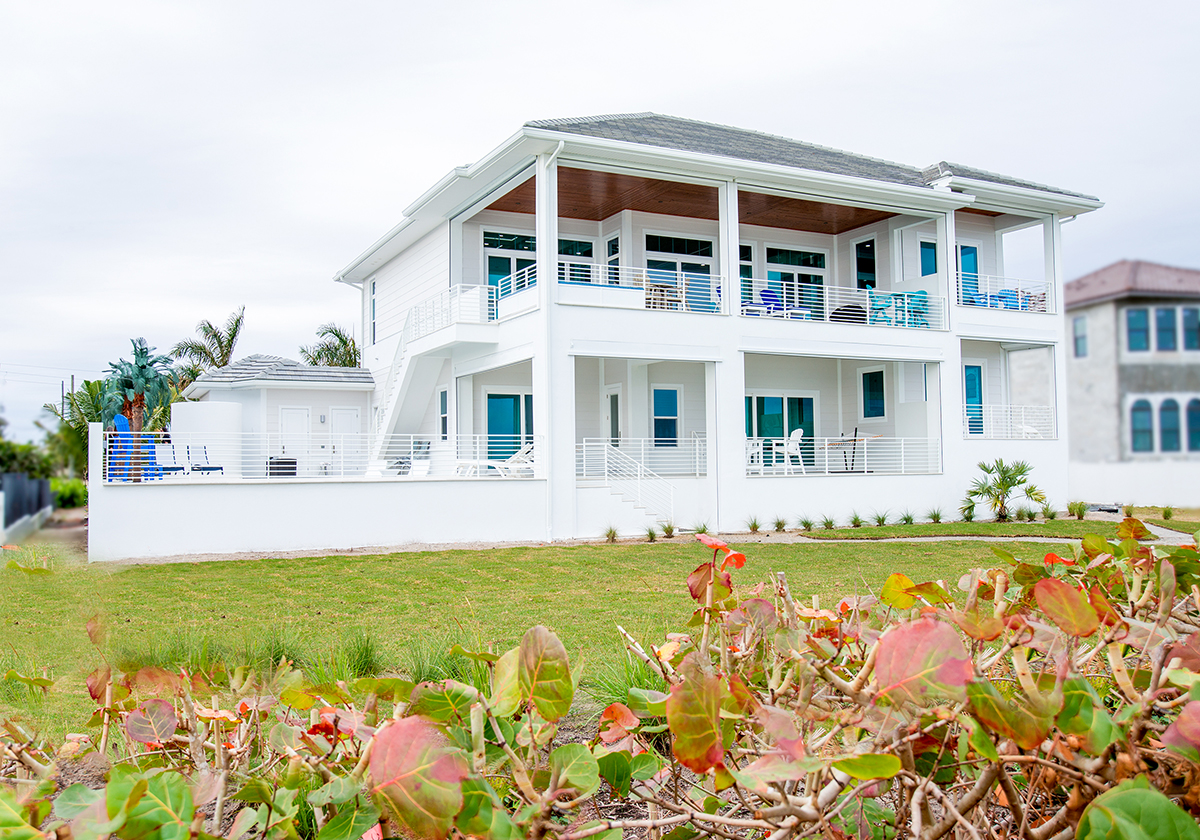 There is no shortage of windows, decks and pool to catch the view of the sea.

FIVE LEVELS HIGH
After exploring the pool area, head inside, where five levels await. One of the owner’s few specifications was that the house be kept at less than 4,000 square feet. With so many levels and nooks and crannies, the residence seems much, much larger.

Bratt also insisted the house be designed for a plus-one.

“He meant he wanted the house to be one better than anything we had done before,” Renee said.

Up to that time, Clary Construction had stopped at four levels when building, so that is how five levels came to be.

Visitors can opt to wind up and down the handsome wire brushed white oak staircases or just take the state-of-the-art elevator, its shaft accented by old Cuban bricks.

On the fifth level is the master suite, its private balcony a generous crow’s nest to survey far off to sea.

“We think it’s the highest deck in a private residence in the area,” Charles said.

The master bath, neither huge nor showy, exudes elegant craftsmanship.

“It’s all about simplicity,” Renee said.

The toilet, however, is anything but simple, for this state-of-the-art fixture boasts a sensor that opens the lid automatically, washes and dries the occupant and closes afterward.

A basket weave marble design on the floor is replicated in the double shower, which features a clear fog-free mirror and deep crown trim. 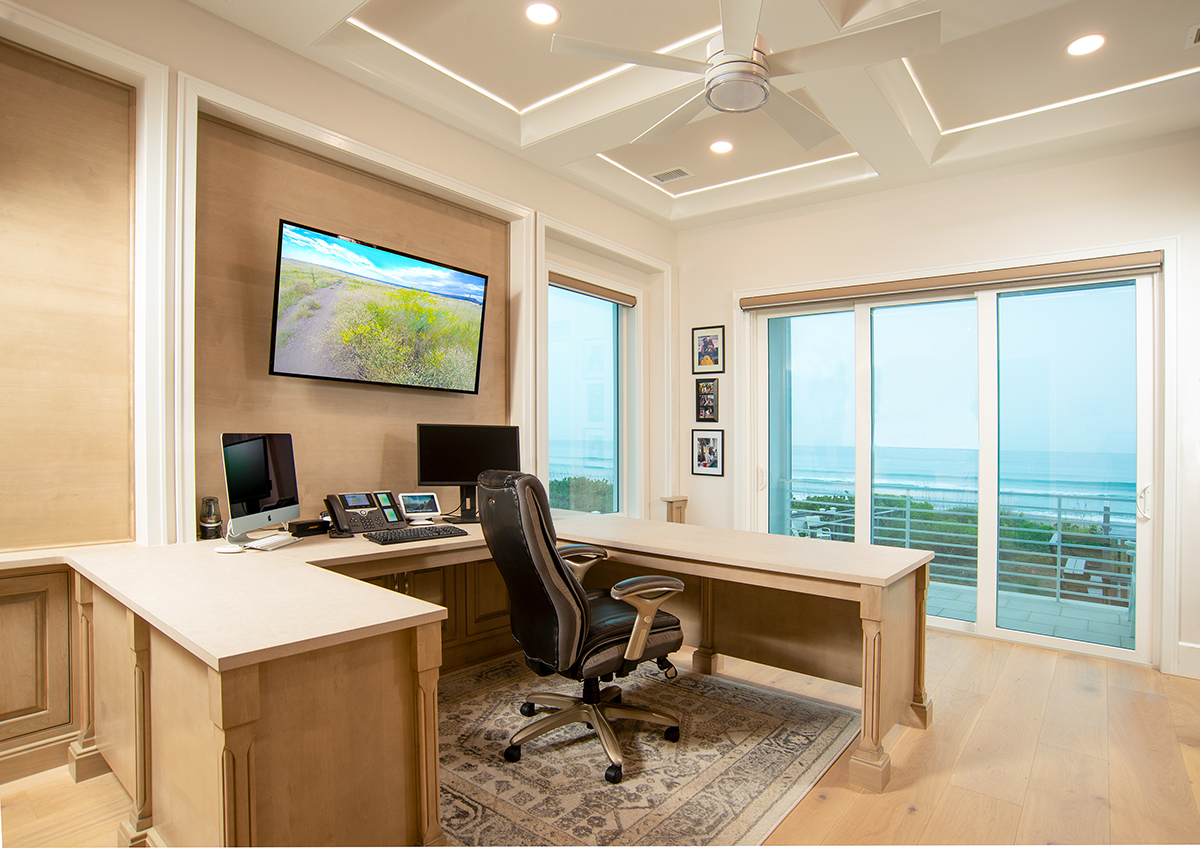 Bratt often works for home, so his third level office had to have a balcony for some quick R&R in between meetings.

SEA VIEWS EVERYWHERE
The main living area is just a level down from the master bedroom, but privacy is easy with solid, sound-proof doors that separate the two very different living spaces.

Everything, including the kitchen sink, faces the water in the magnificent space anchored by a teal kitchen island.

“I wanted him to be able to wash dishes while looking at the ocean,” Renee explained.

The adjoining laundry area is large and elegant enough to be pressed into service as a butler’s pantry.

Restoration Hardware provided the sectional sofa that sits before the abalone mother of pearl fireplace with a linear hearth. Framing the fireplace are rough cut coral stones illuminated by vertical sidelights.

As an unattached man, Bratt opted for a house free from the constraints of a female perspective. This is a man cave of historical proportions. For example, the first view guests have at the front door is that of a sweeping ocean-facing gym with all the bells and whistles, including a beverage station.

“Health is very important to him and he likes to take care of himself,” Renee said.

The busy chief operating officer also wanted a board room, as in a room to house his collection of surfboards, boogie boards and wetsuits. Accessed from the outside, the space leads directly to one of two laundry rooms so sandy towels and wet swimsuits need never reach further inside. A poured concrete treasure sink is at the ready to wash off shells and other bounty from beachcombing.

The front lawn sports not your usual landscaping, but rather a chipping green.

“The whole yard is designed to replicate a golf course,” Charles said.

Five perfectly matched palms, each anchored by a square of blue glass stones, are facsimile palm trees that will remain forever green, forever perfect, with nary an errant frond to sully the scene.

APP TECHNOLOGY
On the fourth level deck, the edge, a hot tub built for two, blends seamlessly with the ocean beyond. Made in California, the tub’s teal tones continue the color palette Renee selected. Shutters that encircle the huge deck can be rolled down at an app’s notice, making privacy a breeze. Speaking of apps, window treatments, all furnished by Blinds of All Kinds, can be controlled via phone.

Bratt often works from home, so the third level office had to have a balcony for some quick R&R in between meetings. Here, Shiloh cabinetry from Heller with Caesar Stone tops exudes cool Ralph Lauren vibes.

One of the two guest bedrooms sports significant built-in cabinetry that can easily double as an office for visiting friends. Both guest sleeping areas have easy access to the pool’s party deck and the ocean.

While the Clary sister was charged with the house’s impressive array of bling, the brother ascertained the residence was solid, efficient and extremely well-crafted. Hardie Board siding, concrete roof tiles and a solid plywood overhang are care-free. Window casings and molding are bespoke throughout, as are the 17 outdoor light fixtures that feature granite accents and custom pottery shades by Justice Designs.

“No one in the world will have the same light fixtures,” Renee said.

This home is so smart that a separate room was needed to house the massive array of technology necessary to run it.
With several large homes around the country, Bratt is no stranger to living well, but it is in Indialantic, at the house with the compass rose, that this world traveler has finally found his roots.

“This beautiful home is the result of spectacular design, attention to detail and a builder the most talented I have ever seen,” he said.

“It is practical and everything is well thought out, but most of all, it is fun!”