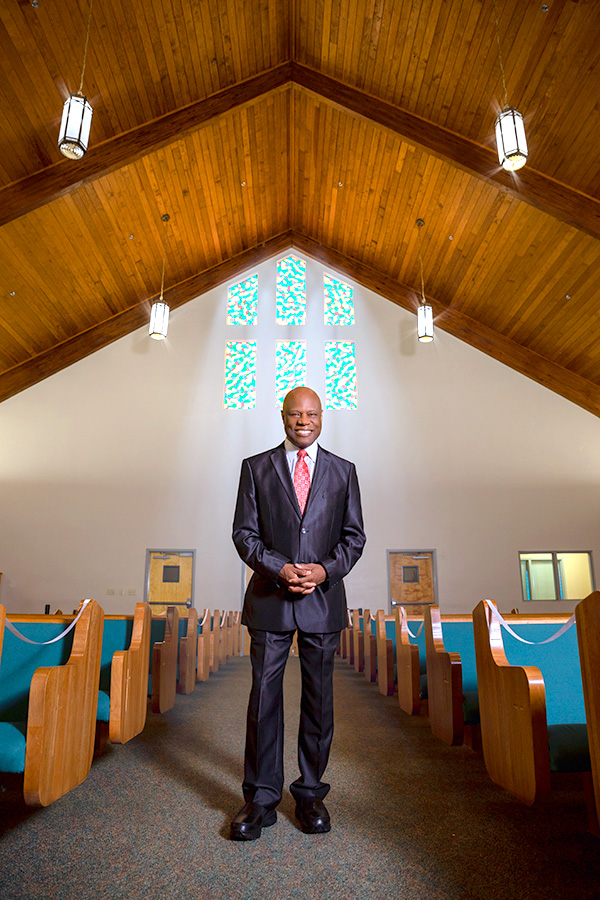 Members of the Palm Bay Seventh-day Adventist Church know what a treasure Pastor Wintley Phipps is and wish him well when he is called to spread the word of the Lord singing around the world. JASON HOOK

Pastor Wintley Phipps found his voice, a voice rich in timbre and purpose, thanks in large part to Sir Tom Jones.

The story of how a native of The Republic of Trinidad and Tobago and a current Vero Beach resident enlisted the vocal chops of a Welsh pop singer to help him in his mission to serve God — and along the way sang before six presidents and countless celebrities — is the stuff of movies.

The Palm Bay Seventh-day Adventist Church he leads knows the treasure he is and happily wishes him well whenever duty calls to spread the word of the Lord singing around the world. 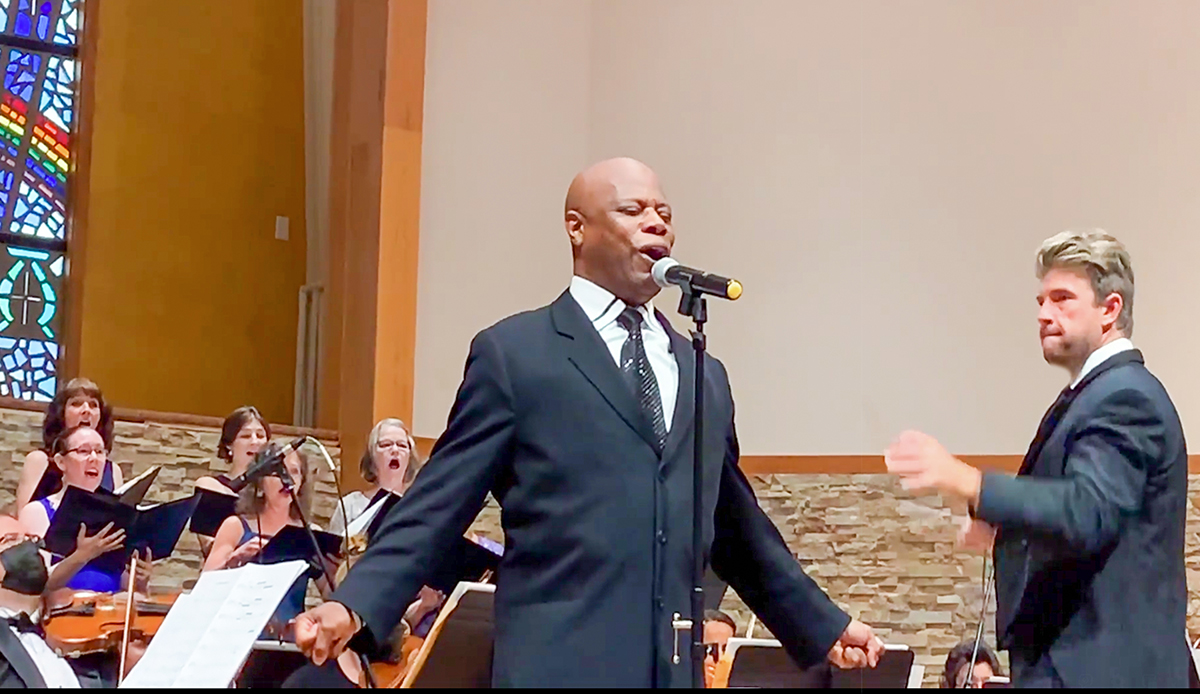 “They think of me not just as a pastor of the church, but also a pastor from the church,” he said.

“I am very blessed to be part of a church that prays for me wherever I go into the world.”

Like many a child of the 1960s, Phipps once dreamt of becoming a rock star but realized there had to be more to greatness than just money and fame. He kept hearing an unforgettable voice in the radio and began trying to mimic this compelling bass baritone. Decades later, he invited wife, Linda, to that star’s concert.

“I bought plane tickets and concert tickets and sent him a note that he had been my musical North Star,” Phipps said.
Sir Tom Jones responded with an invitation to meet him after the concert. 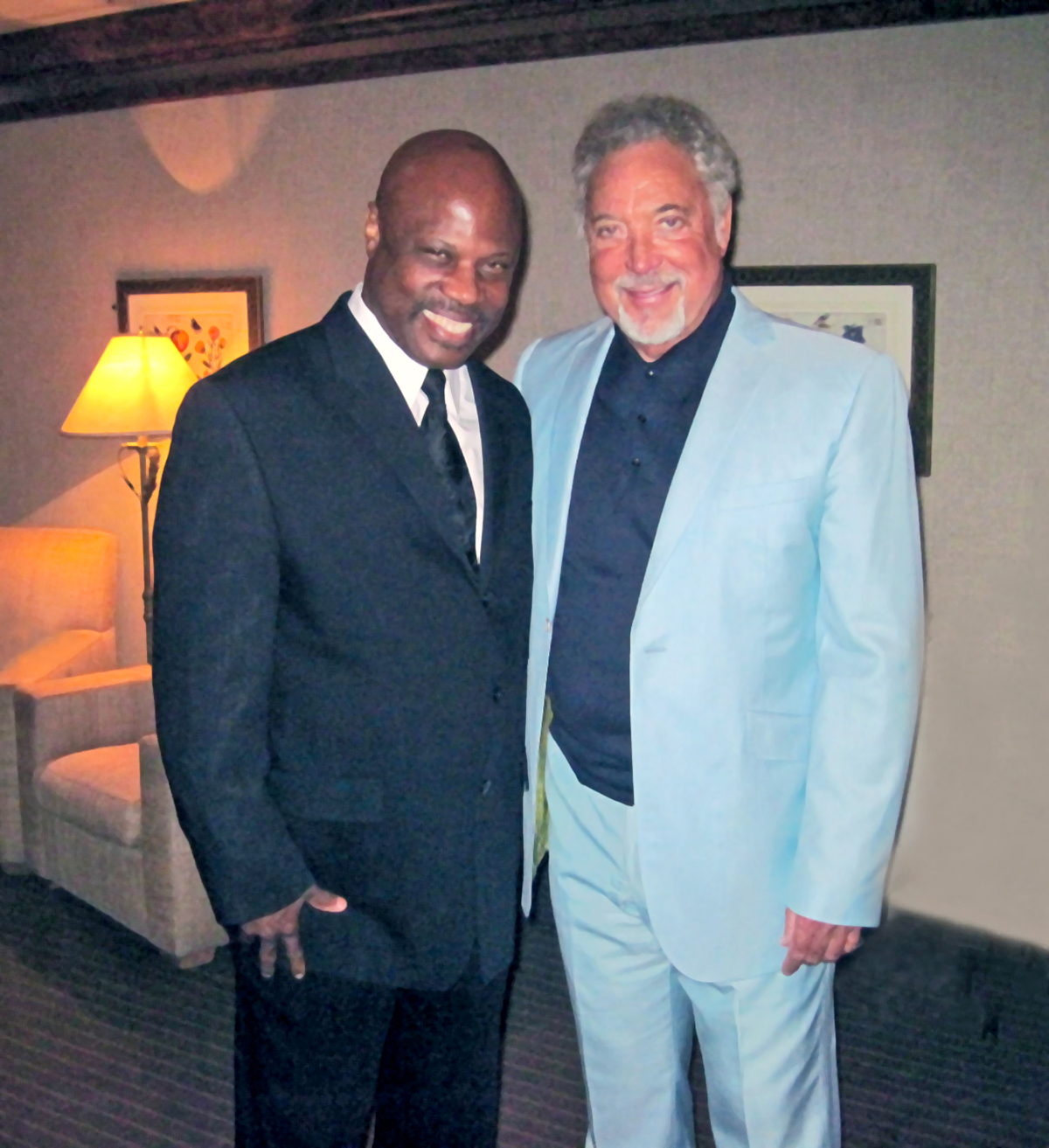 In his youth, Phipps listened to Tom Jones and got to meet him after sending Jones a note explaining what an important role he played in Phipps’ life. WINTLEY PHIPPS

PRAYERS ANSWERED
Phipps’ musical turnaround from rock to gospel began at a Christian boarding school in Canada, where he grew up. Disgruntled at being recruited into the school choir, he grumbled to the headmaster.

“Why don’t you for once do what God wants you to do, not what you want to do?” asked the wise educator, and Phipps decided it was time to let faith do its work.

His surrender allowed him a glimpse of what God had been dreaming for him. When the Heritage Singers American gospel group invited Phipps to tour with them during summer break, he was stunned.

“It was the first time I’ve had a prayer answered,” he said.

At Oakwood College, a Seventh-day Adventist school in Huntsville, Alabama, he was introduced to gospel music and to Linda, his wife of 45 years. The school president, impressed by Phipps’ musical ability, invited him to sing to the General Conference of Seventh-day Adventists in Chicago. It was here he met the Rev. Jesse Jackson, who invited him to accompany him to Africa to witness the evils of apartheid firsthand.

His reputation as a gospel singer grew quickly simply by word of mouth.

“I never had a manager, publicist or agent,” said Phipps, who for 25 years was part of the Rev. Billy Graham’s famed crusades. 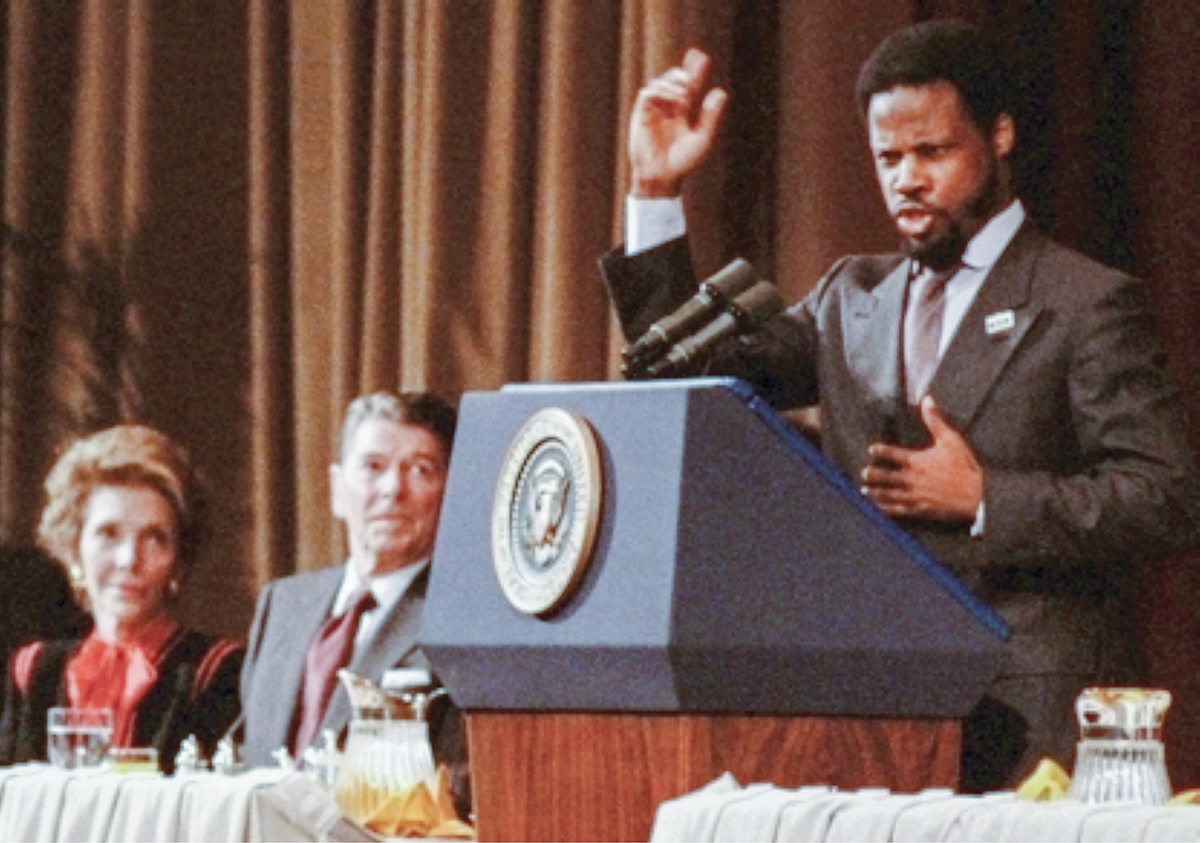 CONNECTS WITH EVERYONE
Movers and shakers were drawn to both his powerful voice and his spirituality. The fact that six very different presidents from competing parties — Jimmy Carter, Ronald Reagan, both father and son Bush, Bill Clinton and Barack Obama — sought him out is testament to his ability to connect with everyone.

One particular evening, he sang for President Clinton before rushing across town to sing at a major Republican function.

He sang at memorial services for Gen. Colin Powell and for civil rights legend Rep. John Lewis of Georgia.

Former House Speaker Newt Gingrich once told Phipps that “every time I hear you, you touch my life.”

Phipps feels he is just doing the job God intended for him.

“I tell people I go where people need the Lord,” he said. “My ministry has been supported on both sides of the aisle.”

His unforgettable voice honored Rosa Parks at her 77th birthday celebration at the Kennedy Center, took him to South Africa to welcome Nelson Mandela from imprisonment and celebrated Mother Teresa at a special event. The twice Grammy-nominated Phipps sang for Pope John Paul II at the Vatican. His rendition of Amazing Grace has amassed more than 25 million views on YouTube.

After a performance in Baltimore, a discouraged young woman who had just lost her job approached Phipps
for advice.

“I told her God was going to bless her and that she would have the opportunity to speak to millions,” Phipps said.

He was right, for the young woman was Oprah Winfrey, who became a staunch friend. 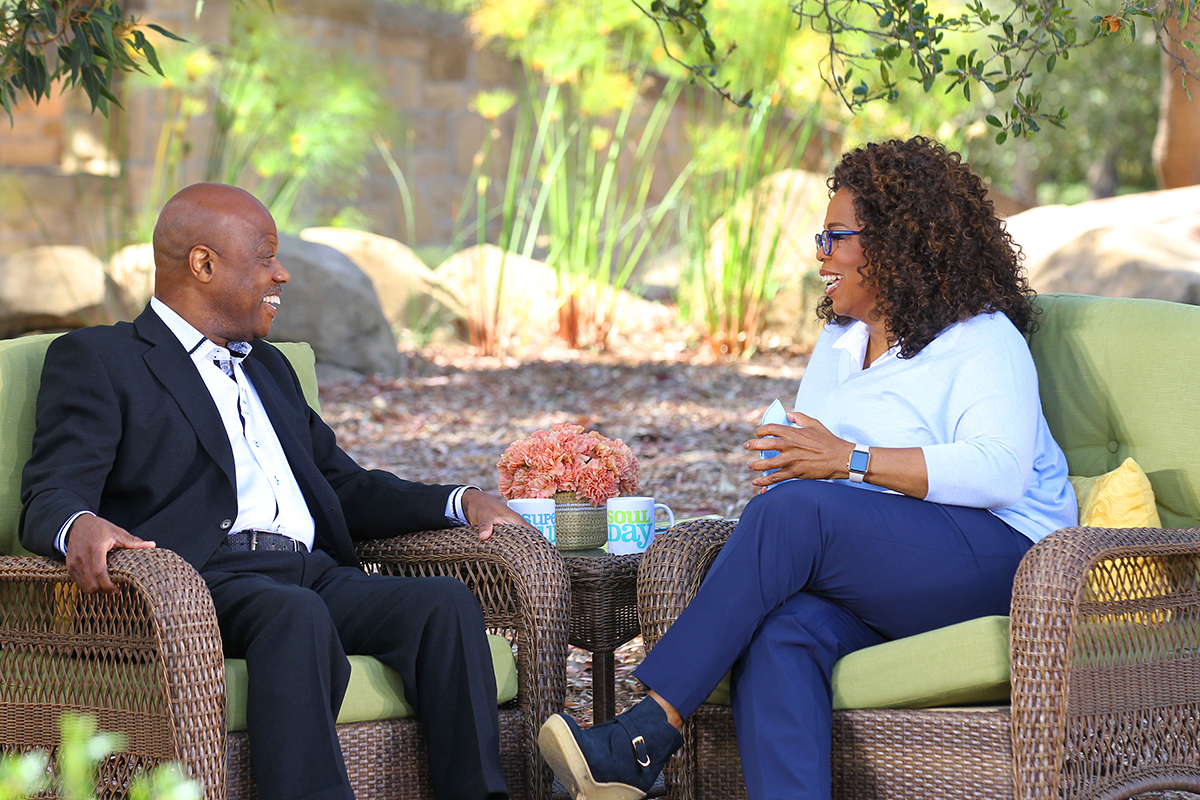 Oprah Winfrey, who reached out to Phipps long before she became famous, calls him her spiritual compass. WINTLEY PHIPPS PHOTOS

OPRAH IS A FAN
Phipps has been a guest on Oprah’s show, as well as on Saturday Night Live. Sporting bell bottoms and a nifty Afro, he was also the first gospel singer to star on Soul Train.

Traveling on Amtrak, Phipps once spotted a despondent-looking man on the train and asked if he could help. The fellow was Chuck Colson, once known as President Richard Nixon’s hatchet man and the first in the Nixon administration to be incarcerated for the Watergate scandal. The two became friends. Through Colson, Phipps learned of Prison Fellowship Ministries. Soon, Phipps was visiting prisons across the country, singing and dispensing hope.

“I have been honored to sing for six presidents of the United States, I have been blessed to sing for Billy Graham, Oprah Winfrey and Mother Teresa, but there is a feeling I get singing to men and women in prisons that is like no other,” he said.

His prison ministry is a subject dear to his heart and one that touches him viscerally, since during a prison visit he came face-to-face with his wife’s young pregnant niece at a Florida prison. Linda’s seven siblings have been behind bars and, in turn, some of their children have also done time.

“Seventy percent of children who end up in prison come from families where parents had gone to prison,” Phipps said. “It is the normalization of incarceration.”

Phipps was one of the first to mentor children whose families were incarcerated or had a history of incarceration. 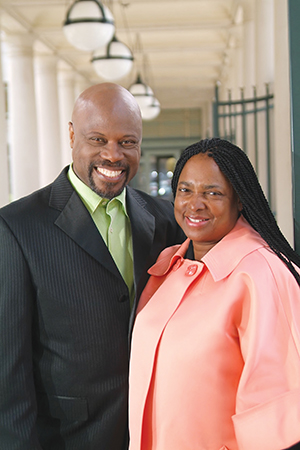 Phipps’ wife, Linda, who he met in college, always accompanies the singing pastor as he travels around the world.

BREAKING THE CYCLE
At the request of several members of Congress, including former Sen. Orrin Hatch, Phipps developed a commission to research ways of breaking the cycle of incarceration within families. Among the members of the group was Hilary Clinton.

“They called us the Odd Couple,” Phipps said jokingly.

The result of that commission was the U.S. Dream Academy, a national nonprofit that serves as a support net for children with a family history of time in prison. From caring adults who reflect God’s love, the youngsters receive mentoring and academic assistance. Among the organization’s strongest friends is Oprah, who has donated $4 million to the cause.

Aaron Collins, founder of the Space Coast Symphony, found this man of God to be highly approachable.

“We met 10 years ago at his home to discuss a collaboration and for me to learn about all the great work he does in the community,” he said.

Phipps has since worked with Collins on projects that include two gospel concerts in Vero Beach and Melbourne.

Phipps thanks God for leading him to the amazing Palm Bay church he leads and the beautiful spot in Vero Beach that he calls home.

“It turned out to be 15 minutes from where Linda grew up,” he said.

Throughout his songs and his sermons, Phipps endeavors to convey what he believes is the destiny of all of us.

“We must grow every day to resemble, reflect and reveal the character of the one who created us,” he said.