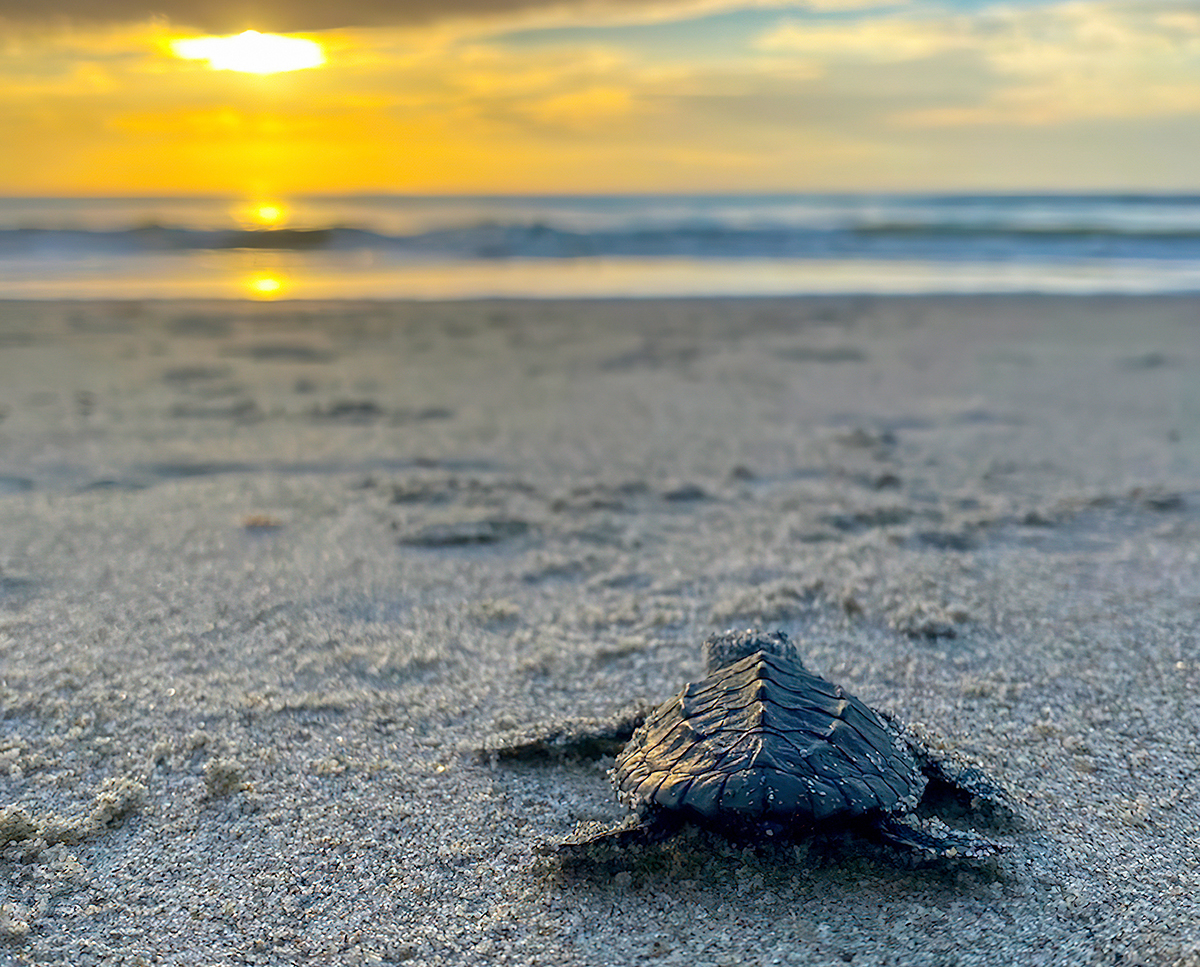 Against long odds, a hatchling heads for the sea.

Brevard County’s 71 miles of coastline is one of the most active areas for sea turtle nesting in the United States. Three species of turtles commonly come ashore to lay their eggs on Brevard’s beaches: loggerheads, greens, and leatherbacks. Altogether, preliminary numbers show nearly 40,000 nests were recorded on the Space Coast last year.

Loggerheads are the most common on local beaches, then greens, and lastly the very rare leatherbacks. Florida has the prime nesting beaches for loggerhead turtles, the largest nesting location in the world. Hawksbill and Kemp Ridley turtles occasionally will nest on Brevard beaches.

Nesting generally takes place from March to November. The species come ashore at different times. Usually the leatherback season starts in March and ends by June, and there are very few nests because they are so rare.

The loggerheads start arriving in April and are usually done by August and account for the majority of the Brevard nestings. The green turtle nesting season usually begins in May and ends by September or October.

Two of the Brevard nesting turtles are listed as endangered [green and loggerhead]. The mammoth leatherback, the largest turtle species, is listed as vulnerable worldwide, but critically endangered in the southwest Atlantic waters around Florida and the Caribbean. 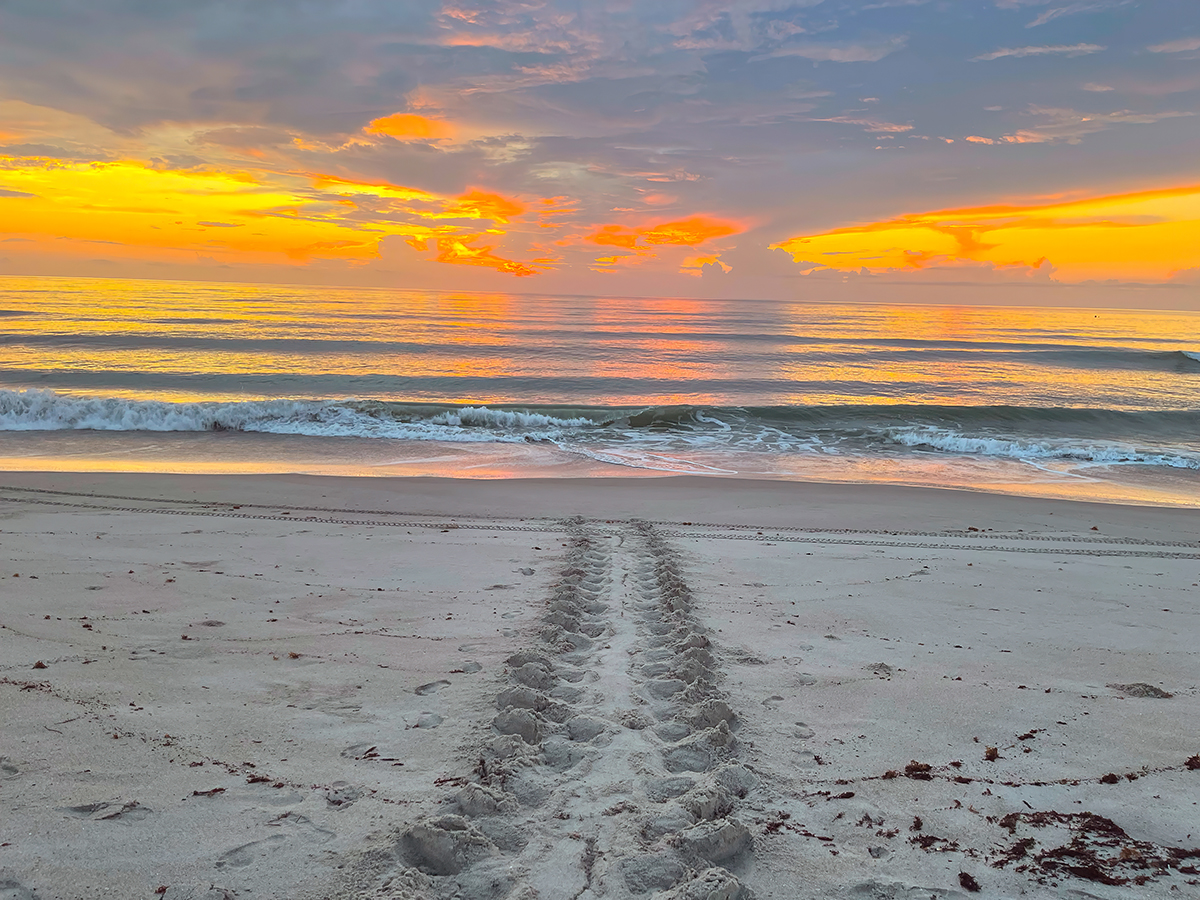 From spring to fall, turtle tracks to and from the sea can be found on Brevard County beaches. FRED MAYS

TURTLE TRACKING
The job of tracking turtles in Brevard primarily falls to several groups: The Sea Turtle Preservation Society, the University of Central Florida Marine Turtle Research Group and the Sea Turtle Conservancy. Working under permits from the Florida Fish and Wildlife Commission, each has a specific area of the Brevard coast that it patrols daily during nesting season to find and mark new nests.

The turtles usually come ashore at night. Finding turtle tracks on the beach in the morning is a pretty common occurrence. But not all tracks lead to a nest. There are many false crawls where, for whatever reason, the turtle turns around and goes back to sea without nesting. Sometimes the turtle may crawl onto the beach several times in the same night before nesting.

The nesting process can take up to several hours from the time the turtle arrives on the beach. Loggerheads nest rather quickly while greens take some time. Each nest typically has 80-120 eggs. It takes about two months for the eggs to hatch, and that is the beginning of an arduous and dangerous life for the tiny hatchlings.

From the nest the baby turtles have to crawl down the beach to the ocean, then swim as far as 20 miles out to sea to the sargassum [sea weed] where they can feed and hide from predators. 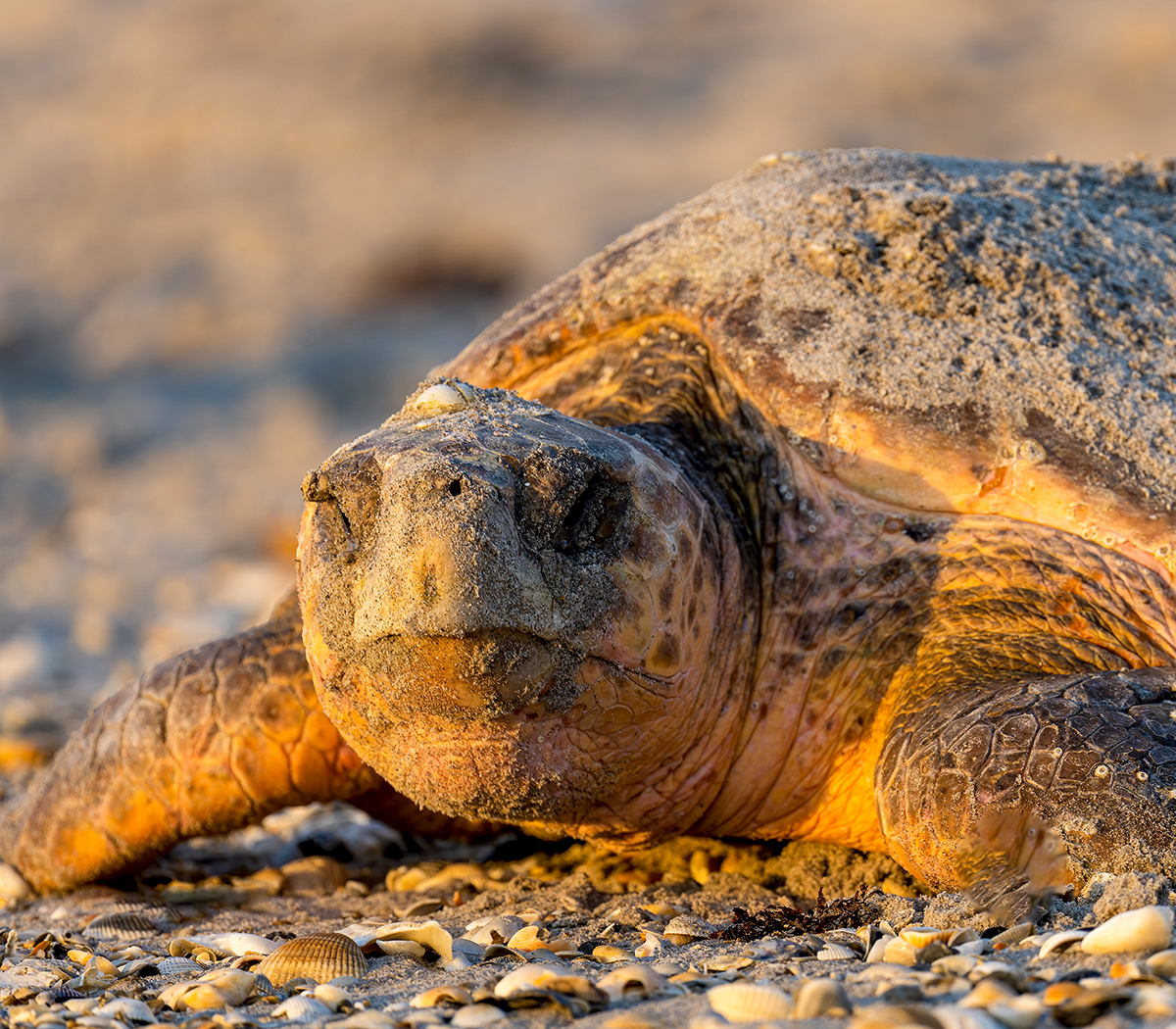 DANGEROUS BABY STEPS
During this trek the baby turtles have to contend with predators like birds, ghost crabs, raccoons and coyotes on the beach. Then many fall prey to fish and sharks. Some are caught up in fishing nets and drown. Craig Konkel of the Sea Turtle Preservation Society in Brevard County says only about one in a thousand hatchlings live to become adults.

Sebastian Inlet State Park Ranger Addy Finegan says walks will be scheduled four nights a week, and have a limited number of people, usually about 20.

The turtle walks are regulated by the State of Florida Fish and Wildlife Commission. Participants in turtle walks cannot take flash photography of the nesting. No flashlights are allowed. Guides use red lights to lead the way. Participants in the walks need to be prepared to hike a mile or more in soft sand. 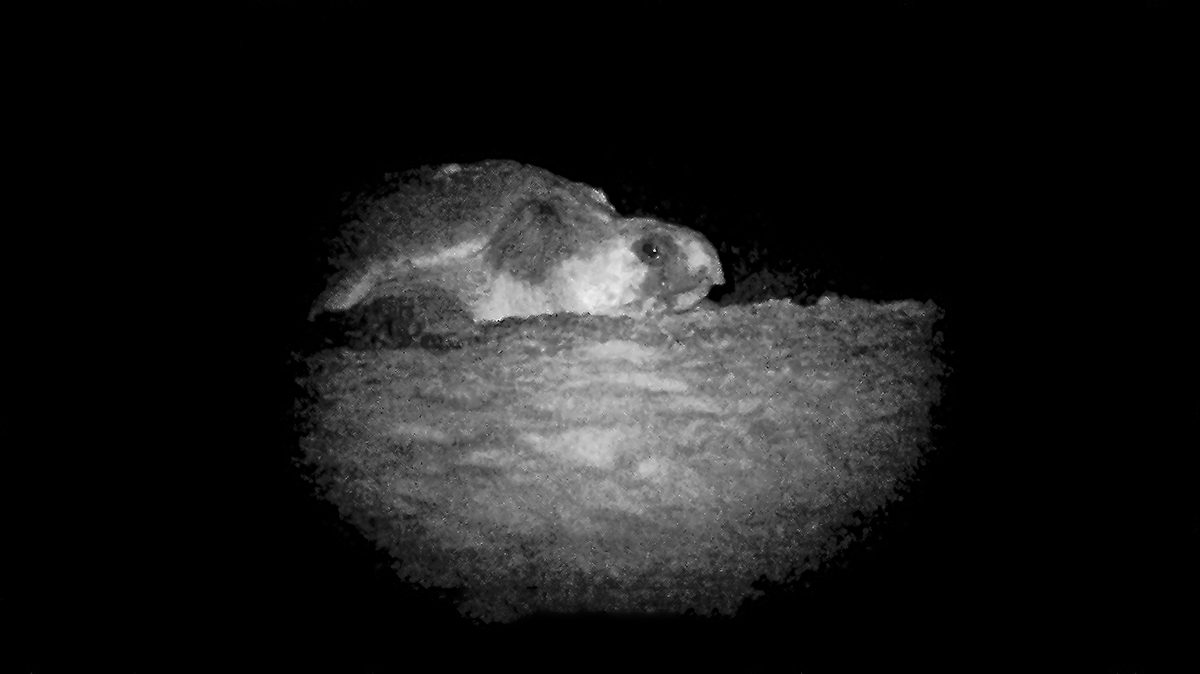 TOUR TAKES HOURS
Groups assemble at dusk for orientation. State park groups meet at the Sebastian Fishing Museum in the park. STPS groups meet at either Satellite Beach or Melbourne Beach. Friends of the Carr Refuge and Sea Turtle Conservancy lead walks out of the Barrier Island Education Center. Groups send scouts out to search the beach for turtles. When they are spotted, the group is led to the nesting locations. The whole process can take several hours. Don’t plan on getting much sleep that night.

In addition to the walks, the Sea Turtle Conservancy also takes the public out to turtle nesting locations where the turtles have already hatched. Executive Director David Godfrey says his teams dig into the nest area and invariably find live hatchlings still in the nest.

Susan Skinner is the chairperson for the Sea Turtle Preservation Society. She can also be spotted behind the wheel of the STPS rescue van. Injured or stranded turtles are taken to the Brevard Zoo or Sea World in Orlando, the two closest turtle rehab locations in Central Florida. According to Skinner, STPS responded to 270 Brevard turtle strandings last year.

Skinner says the public should not approach an injured or stranded turtle. Before doing anything, call the STPS hotline at 321.206.0646 for assistance from trained volunteers. Outside Brevard, call the Fish and Wildlife Commission’s hotline at 1.888.404.3922 to report an incident. She says even dead turtles should be reported. Last year 1,889 calls were made to the hotline. 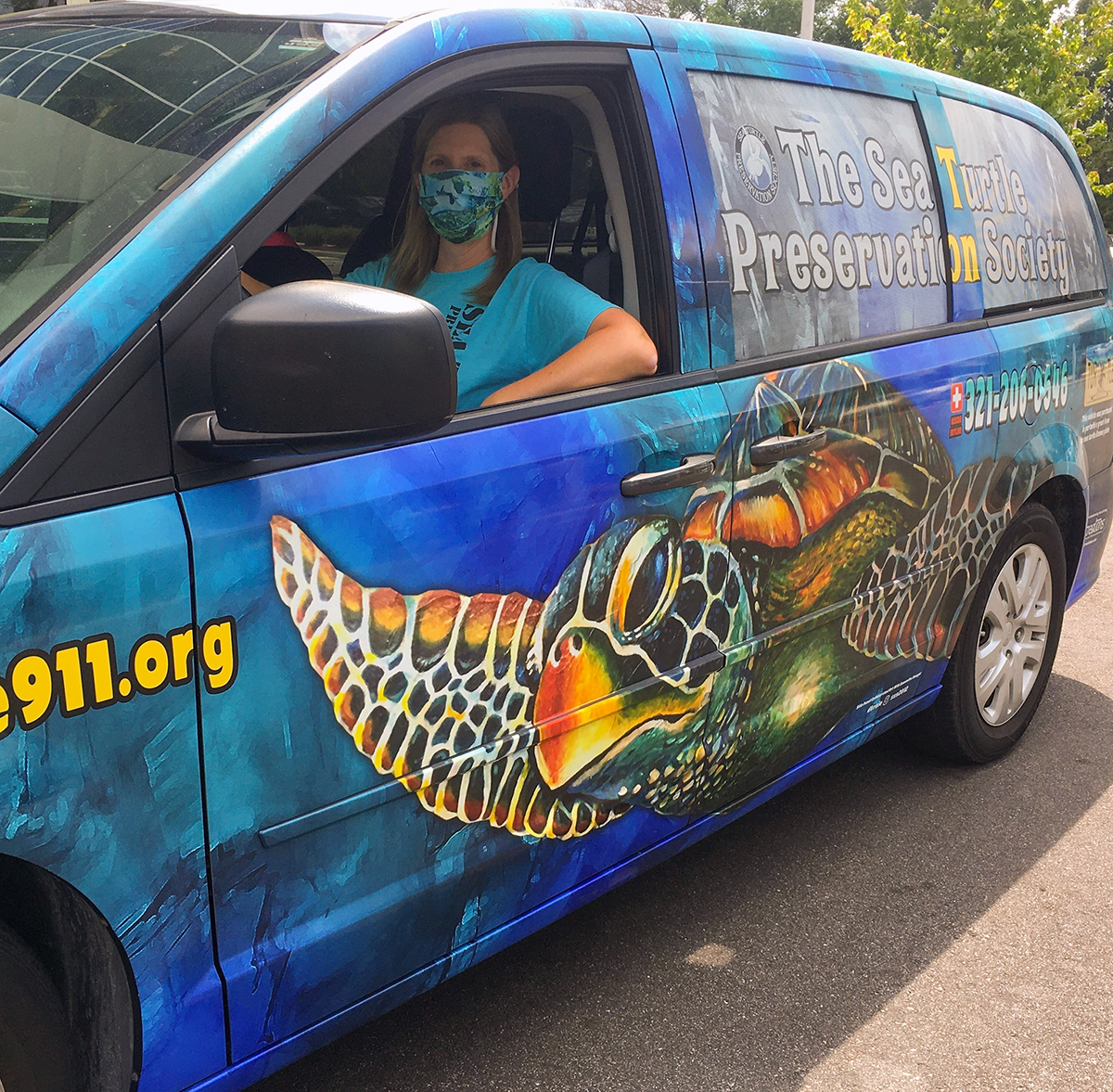 Susan Skinner, preservation society chairwoman, pitches in to drive the rescue van when an injured or stranded turtle needs help.

EDUCATION IS KEY
The Sea Turtle Preservation Society is an all-volunteer organization, with more than a thousand members, and about 440 active volunteers. It is funded by memberships, donations, purchases at the gift shop at its headquarters on A1A in Melbourne Beach and the annual Turtle Krawl 5K event at Nance Park in Indialantic.

The Sea Turtle Conservancy is a science-based research agency. It’s funded by the sale of Florida Sea Turtle license plates. It’s based in Gainesville, but locally works out of the Barrier Island Center in Melbourne Beach. Godfrey says it has been studying turtles for more than 60 years.

Education is a key role played by the STPS. Volunteers visit local schools. There are turtle trunks filled with education materials that teachers can check out for use in classrooms. They also visit resorts and condominiums to make turtle safety presentations. According to Skinner this “works really well for visitors who don’t know about our beaches and turtles.”

There is also an information kiosk at Port Canaveral that is open on weekends and has a gift shop and educational displays.

A turtle walk can be an exhilarating experience and Brevard County offers many opportunities to participate. 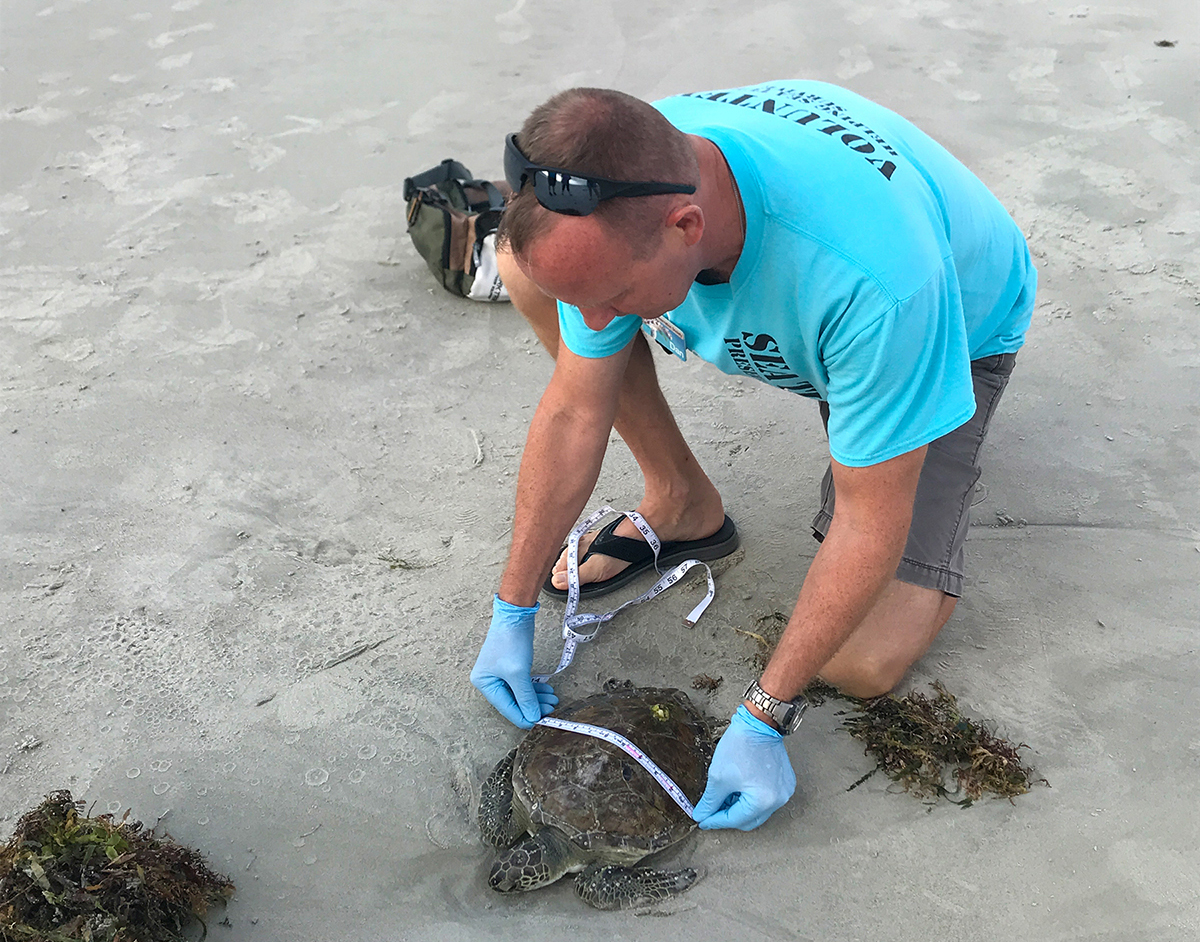 A trained volunteer for the the Sea Turtle Preservation Society measures a turtle.

Things you can do to help the turtles:
• Don’t leave trash on the beach or in the water
• Don’t leave beach chairs and umbrellas on the beach
• Fill in any holes dug in the sand
• Smooth over sand castles and other things children may build in the sand, so as to not interfere with the turtle’s path
• Don’t use flashlights at night, or have any lights on your property facing the beach
• Observe the Brevard County ordinance that bans lights on the beach beginning May 1
• If you see a turtle coming ashore, maintain a distance and do not get between the turtle and the dunes 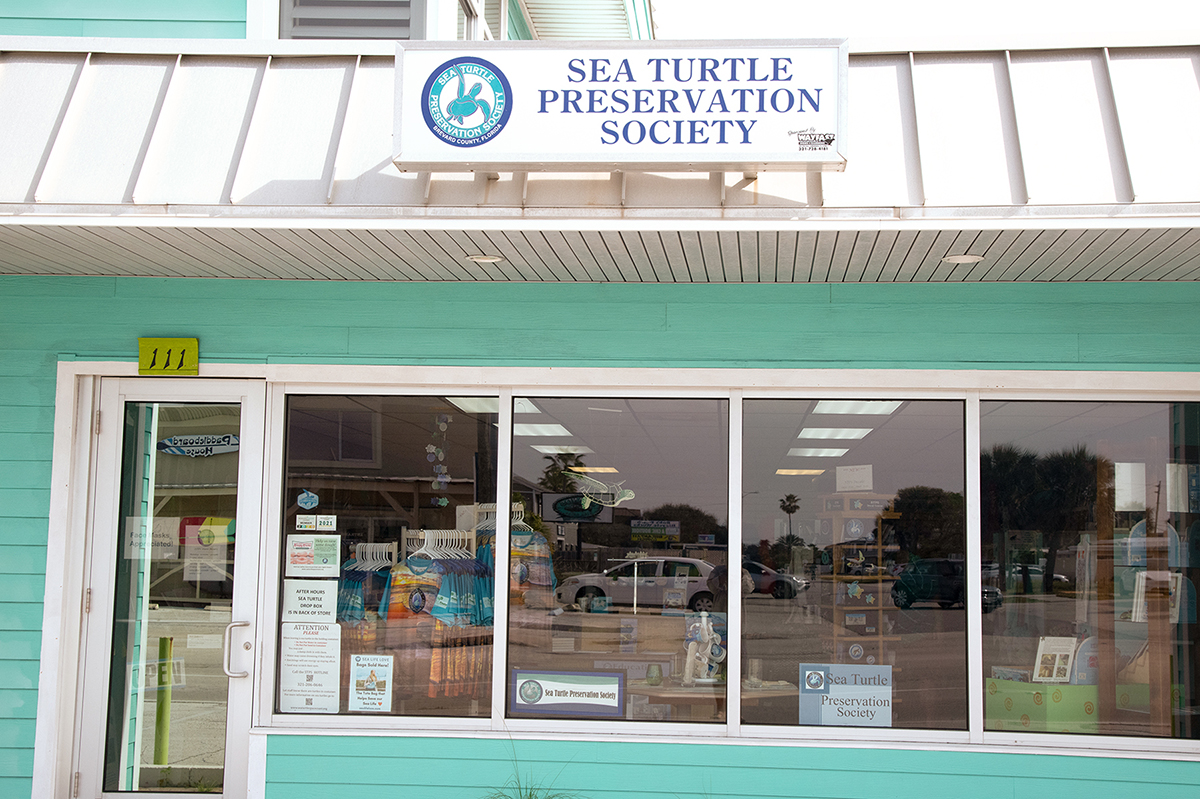 The STPS is funded by memberships, donations and purchases from the gift shop at their headquarters on A1A in Melbourne Beach. FRED MAYS

Where: Groups assemble at dusk for orientation. State park groups meet at the Sebastian Fishing Museum in the park. STPS groups meet at either Satellite Beach or Melbourne Beach.

Cost: Both the State park and STPS ask for donations. Last year those donations ranged from $10-$18 per person. The Sea Turtle Conservancy charges $15 for a reservation.

Registration: This is done online, beginning May 1, and spaces book up fast. The turtle walks take place in June and July.

To register go to:

Friends of the Carr Refuge – https://carrrefuge.org/nightime-turtle-walks