In tributes unique among NASA’s field centers, the Kennedy Space Center Visitor Complex preserves the feats of the nation’s astronauts. The U.S. Astronaut Hall of Fame is part of the Legends and Heroes exhibit. In addition, a vast collection of astronaut memorabilia and the stunning black granite Space Mirror Memorial honor their service and sacrifices.

The premier spaceport has memorialized astronauts’ bravery, accomplishments and wisdom over the decades for the world’s inspiration and hope. In their own words, astronauts share insights from exploring space. 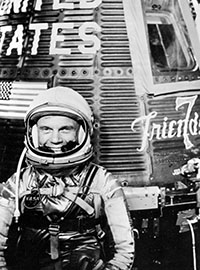 JOHN GLENN, one of NASA’s original seven Mercury astronauts and a four-term senator from Ohio, was the first astronaut to orbit the Earth on Friendship 7, Feb. 20, 1962. He launched into space again aboard the shuttle Discovery on Oct. 29, 1998, when he was 77. As a senator, he was respected for his work to prevent the spread of weapons of mass destruction and for his technical knowledge.

“To me, there is no greater calling. If I can inspire young people to dedicate themselves to the good of mankind, I’ve accomplished something. ”

— From an interview with the Cincinnati Enquirer in 2002 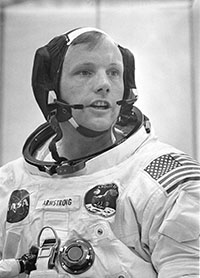 Mission commander Neil Armstrong checks communications prior to boarding the spacecraft for the Apollo 11 mission in July 1969. NASA

NEIL ARMSTRONG was the first man to walk on the lunar surface in the Apollo 11 flight July 29, 1969, with command module pilot Michael Collins and lunar module pilot Buzz Aldrin. He was a naval aviator and test pilot prior to joining NASA. After his flight career, he was in NASA’s administrations, served as an aerospace engineering professor at the University of Cincinnati and later as head of a computer corporation. He was awarded honorary doctorates, decorated by 17 countries and was honored with the Presidential Medal of Freedom and the Congressional Gold Medal among many other awards.

“I guess we all like to be recognized not for one piece of fireworks, but for the ledger of our daily work. ” 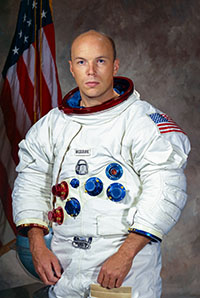 Story Musgrave made advances in space medicine during his NASA career. NASA

STORY MUSGRAVE is a Marine, a physician and astronaut. He served NASA for 30 years with expertise garnered from earning six academic degrees in math, science and medicine. He started work at NASA in 1967, helping design spacesuits, life support systems, airlocks and manned maneuvering units that were used for spacewalks. He and astronaut Jeff Hoffman performed one of the longest spacewalks in history in a nearly eight-hour stint to repair the Hubble Space Telescope while aboard the shuttle Endeavour in December 1993. He later consulted with Disney’s Imagineers. Musgrave was awarded NASA’s Distinguished Service Medal, its highest honor. 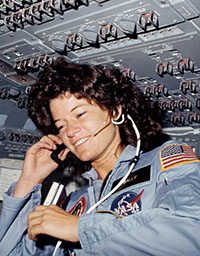 Sally Ride prepares for her first mission in June 1983 on the flight deck of the shuttle Challenger. NASA

SALLY RIDE was the first American woman astronaut to go into space on the shuttle Challenger on June 18, 1983. She flew on two shuttle missions prior to the Challenger disaster in 1986 and was the first woman to operate the shuttle’s robotic arm. She earned a doctorate in physics from Stanford University and served as a physics professor at the University of California following her NASA stint. She advocated for science education. She helped create NASA’s EarthKAM that let students take photos of the Earth remotely from the International Space Station. President Barack Obama awarded her the Presidential Medal of Honor posthumously.

“ Studying whether there’s life on Mars or studying how the universe began, there’s something magical about pushing back the frontiers of knowledge. ” 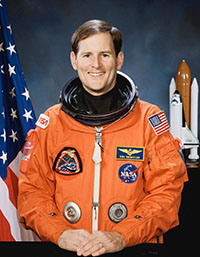 Kenneth Reightler is known for his work in space communications. NASA

KENNETH REIGHTLER, a Navy captain, piloted the first shuttle flight for scientific studies of the Earth on Sept. 12, 1991. He was also the pilot of the first joint mission with Russia on Feb. 3, 1994. After serving as an astronaut, he was in management at Lockheed Martin, becoming president of its space operations company. Now a distinguished professor at the U.S. Naval Academy, he has appeared in the films To Be an Astronaut and Barney in Outer Space.

“For me, as an engineer and a pilot, it was an unbelievable experience to now be conducting world-class science in a range of disciplines with the potential to benefit so many people back on Earth, such as experiments designed to help produce vaccines used to eradicate deadly diseases, to produce synthetic hormones, or to develop countermeasures for the effects of aging.”

— From a NASA report on the space shuttle 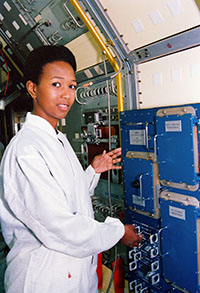 As mission specialist in 1992, Mae Jemison works at an experiment rack inside the Spacelab module installed in Endeavour’s cargo bay. NASA

MAE JEMISON, an engineer and physician, became the first African American woman to fly in space on the shuttle Endeavour Spacelab on Sept. 12, 1992. She served as a science mission specialist in a cooperative mission between the United States and Japan, which included 44 experiments in life science and materials processing. She served in the Peace Corps prior to joining NASA and taught at Dartmouth College after she left NASA in 1993. She started a consulting company to market advanced technologies. She is an advocate for worldwide health needs and active in many nonprofits. She appeared in a 1993 episode of TV’s sci-fi show, Star Trek.

“I was in training from when I was born until I became an astronaut, because as an astronaut you use all the skills you learn in life. ” 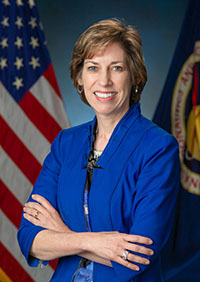 ELLEN OCHOA was the first Hispanic woman in space when the shuttle Discovery launched in 1993, and the first Hispanic woman to direct the Johnson Space Center. She earned three patents for optical systems prior to becoming an astronaut. She holds a master’s degree and doctorate in electrical engineering from Stanford University and won many awards for her career service prior to retiring from NASA.

“What everyone in the astronaut corps shares in common is not gender or ethnic background, but motivation, perseverance, and desire — the desire to participate in a voyage of discovery.” 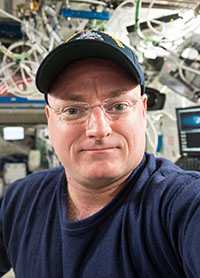 Astronaut Scott Kelly works aboard the space station on May 30, 2015. NASA

SCOTT KELLY, a Navy captain, set a record with Russian cosmonaut Mikhail Kornienko when they served from March 27, 2015, to March 1, 2016, on the International Space Station. His first flight was as pilot of the shuttle Discovery on a Hubble Space Telescope repair mission in 1999. On his third and yearlong fourth missions, he arrived via the Soyuz spacecraft to the space station. He served stints there as commander and conducted yearlong biological, cognitive and genetic tests with his identical twin, Mark, to document space travel’s effects on humans. After he retired from NASA, he was appointed the United Nations Champion for Space. Time magazine featured him on its Dec. 29, 2014, cover and on its 2015 list of 100 most influential people. He is the recipient of awards from the Navy and NASA.

“After spending a year in space, I was absolutely inspired that if we can dream it we can do it … and most importantly, if we work as a team because teamwork makes the dream work. The sky is not the limit. ” 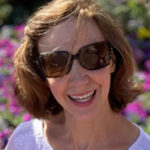 Lucinda Coulter grew up hearing sonic booms over her family’s farm near what is now Grissom Air Force Base in north-central Indiana. She now resides near the Space Coast and loves family outings and lap swimming. She is thrilled to write about space exploration and its heroes - both sung and unsung.
565 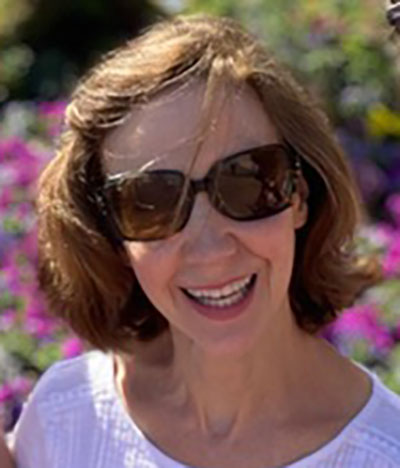 Lucinda Coulter grew up hearing sonic booms over her family’s farm near what is now Grissom Air Force Base in north-central Indiana. She now resides near the Space Coast and loves family outings and lap swimming. She is thrilled to write about space exploration and its heroes - both sung and unsung.