He favors the traditional look. She loves, loves modern glam.

When it was time for Michelle and Chuck Muller to furnish their dream home in Viera, the couple knew what they each liked, but were not sure how to blend both styles into a look that would make both happy. 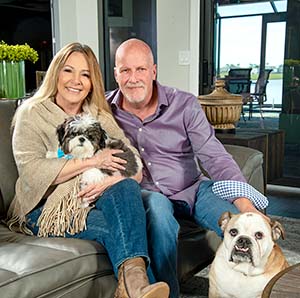 Enter Wilver Palencia with Pullman West in Rockledge, an interior designer with plenty of ideas.

“They were very receptive to my opinions,” Palencia said.
The Mullers’ responsiveness was refreshing, as was their total-house approach. Their previous home was 3,500 square feet on two floors, but when they moved the short distance to the new house Joyal Homes created for them, they parted ways with most of the old furniture.
“Our nephew made out like a bandit,” Chuck Muller said.

Since the new three-bedroom, three-bath home is 500 square feet smaller, the couple was technically downsizing, but they had years ago realized that they were fully utilizing only about 1,600 square feet of the bigger house, so, in fact, the new digs, with its seamless flow perfect for entertaining, plus all the bells and whistles, offered more usable space.

“We downsized but upsized,” he added.

Jeff Joseph, Joyal Homes executive designer, channeled his 36 years in the industry to design a home that takes the utmost advantage of the available space, the view and the site.

“It’s all in the details with Jeff,” said Kerri Kunde, marketing director for Joyal Homes.

“There is not a step in the design and building process that Jeff has not carefully evaluated and improved upon.”

Joseph did have a couple of not so very tiny problems to tackle in the form of huge Gothic doors from an 1800s-era cathedral and a glass-and-wood wall from Orlando’s late, great Church Street Station complex, which in the 1970s was considered among the top attractions in Florida. 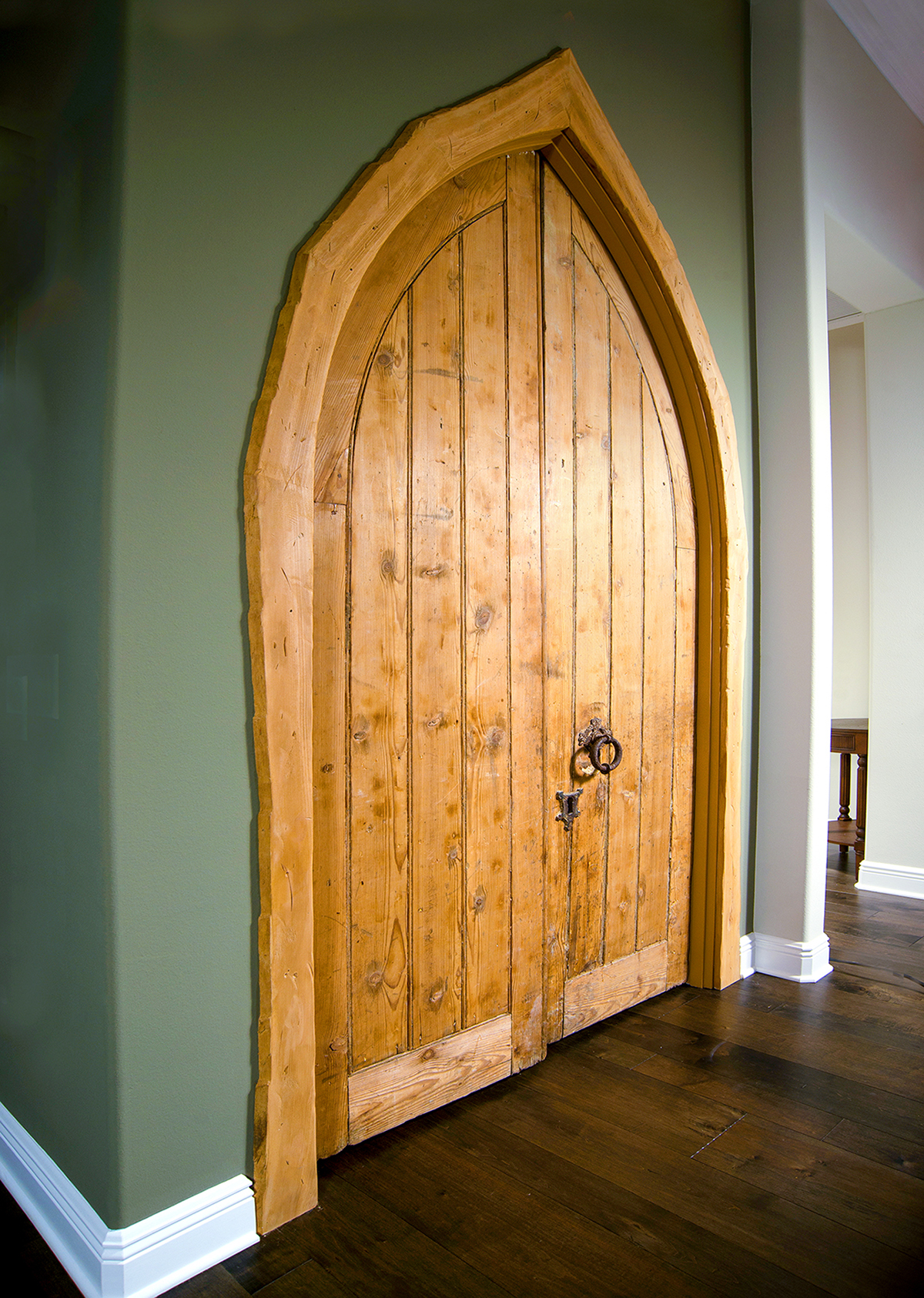 The couple found both massive pieces while browsing at Florida Victorian Architectural Salvage in Deland and wanted them incorporated into their new home.

So, what do you do with mammoth church doors? Use them in your pantry, of course. The doors had no casing, but that only provided an opportunity to make an even greater statement.

“Our trim carpenter, Manny Rodrigues, did the casing with a live edge,” Joseph said.

The pantry also serves as a coffee bar and to make access of the higher shelves both fun and a breeze, a library ladder, trimmed down to scale, was installed.

The ornate Victorian pub wall from Church Street Station, with its elaborate beveled glass, rich dark woods and brass inserts, seemed tailor-made to create a foyer space without altering the open plan feel of the house. Discussions on whether or not to restore the antique wall followed.

“We decided to keep it as original as possible and match the trim as much as possible,” Palencia said.

Both accent pieces were pivotal on the path the entire design would follow.

On the other side of the wall, a railway station clock replica from the Bombay Co. fit perfectly into the space created by the wall and the pantry. It is here, in the wine and cigar room, that the Mullers expect plenty of casual entertaining to happen.

“Once the wall and the doors happened, things started to fall into place,” Muller said. 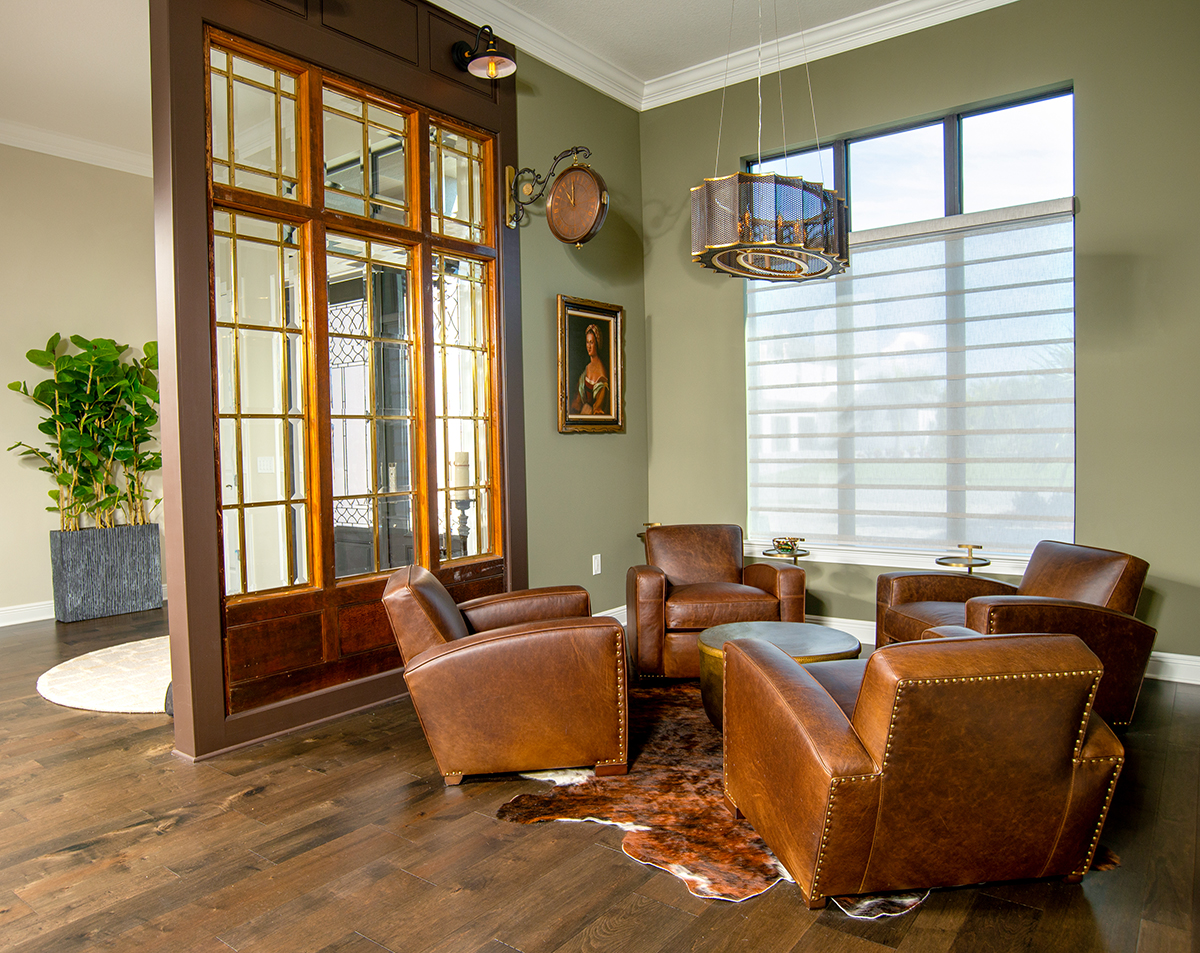 An ornate pub wall from the legendary Church Street Station in Orlando was tailor-made to create a foyer space without altering the open plan feel of the house.

Four leather club chairs from Restoration Hardware offer a cozy retreat atop a cowskin rug from Napa. The wall’s deep, moss greens contrast with the rich chocolate of the chairs. In the space, the traditional and the contemporary blend well, as witnessed by a Lladro statue of Don Quixote, a find from Spain, just inches away from a bold abstract that Palencia recommended.

Since Zoey, the shih tzu, and Bentley, the English bulldog, are also part of the Muller clan, the design needed to include the two. For the great room, Palencia suggested a sloped arm leather sofa from Hooker Furniture, known for quality and durability.

“It is very pet-friendly,” he said.

The sofa faces an 85-inch flat screen television embedded within a bespoke niche atop a 100-inch gas linear fireplace.

An 84-inch, 10-blade ceiling fan from the 13.5-foot coffered ceiling adds a touch of industrial to the setting. 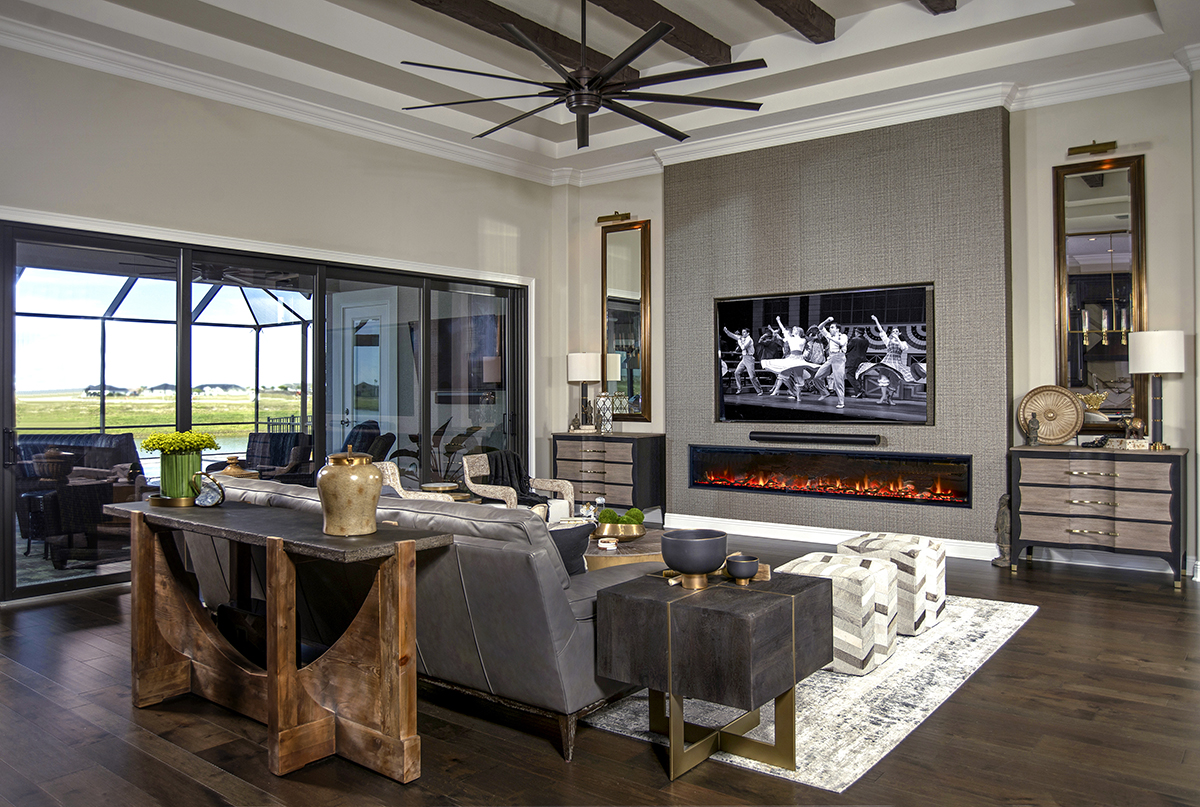 A triple tray ceiling with faux beams spans the great room in the house Joyal Homes created for Michelle and Chuck Muller. A 10-blade ceiling fan adds a touch of industrial to the setting.

From the vantage point of the entrance, a vista of the home’s common areas encircles the viewer. Even the media room, aka Chuck Muller’s man cave, can be seen. Its clean, neutral palette is highlighted by subtly abstract wallpaper with a hint of copper shimmer.

Some of their furniture made the move to the new house, including a leather ottoman Muller’s grandfather discovered in Egypt and a former curio cabinet that has been transformed into a handsome liquor cabinet. A sleek three-blade ceiling fan nods to Muller’s work for an aerospace company.

The home gathers plenty of glam points with its lighting. The intricate and glittering fixture over the kitchen island is a prime example. A stunning chandelier from House of Lights provides Muller, the official chef in the household, plenty of light. He put himself through college working as a cook, so for his new home, he wanted superior appliances such as the three-column, push-open Thermador refrigerator that incorporates a center wine cooler. 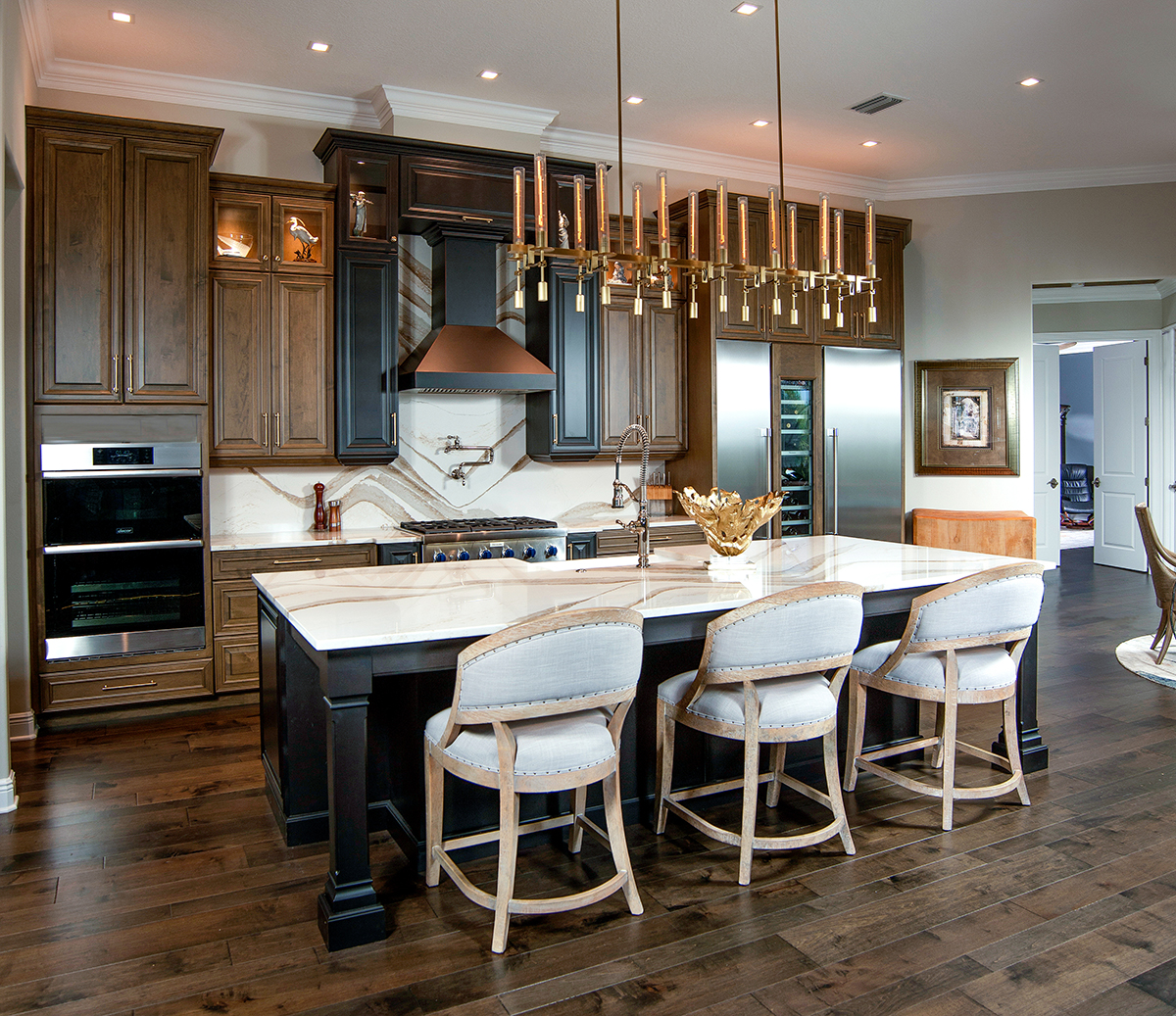 The Mullers’ new kitchen features a stunning chandelier from House of Lights and a three-column push-open Thermador refrigerator with center wine cooler.

Semicircular aquarium glass offers unrestricted views of the pool and lake from the dining area, where a glass-topped circular table from Century Furniture seems to rise from the earth, supported by a wooden base that has an abstract representation of roots.

Joseph ascertained that the lake view be the focus of the Muller house, and indeed, fantastic views of Intercoastal Pools’ infinity pool are everywhere, from the main living areas to the master suite. 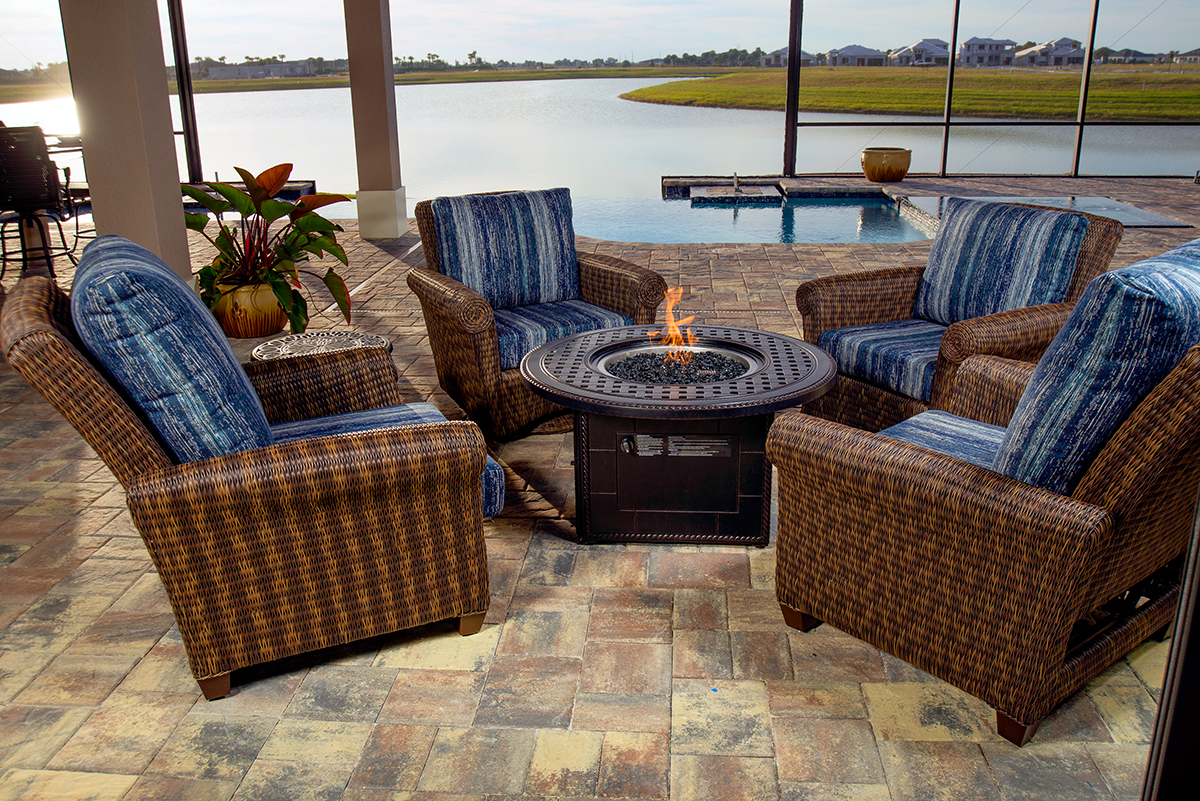 The giant picture pool screen does not clutter the eye with additional lines, allowing for the visual delight of the stunning pool flanked by an infinity spa on one side and a beach entry on the other. In the evenings, brown copper water bowls showcase the stunning combination of fire and water.

The Mullers were definitely hands-on when it came to building their new house.

“We were there every single day driving them crazy,” Muller said.

Building a house is sometimes compared to childbirth. For them, birthing their new residence must have been a more of a pleasure than a labor, since just weeks after moving in, they were already toying with the possibility of building another house in a new neighboring development.