by Fred Mays -
Giving Back, Local 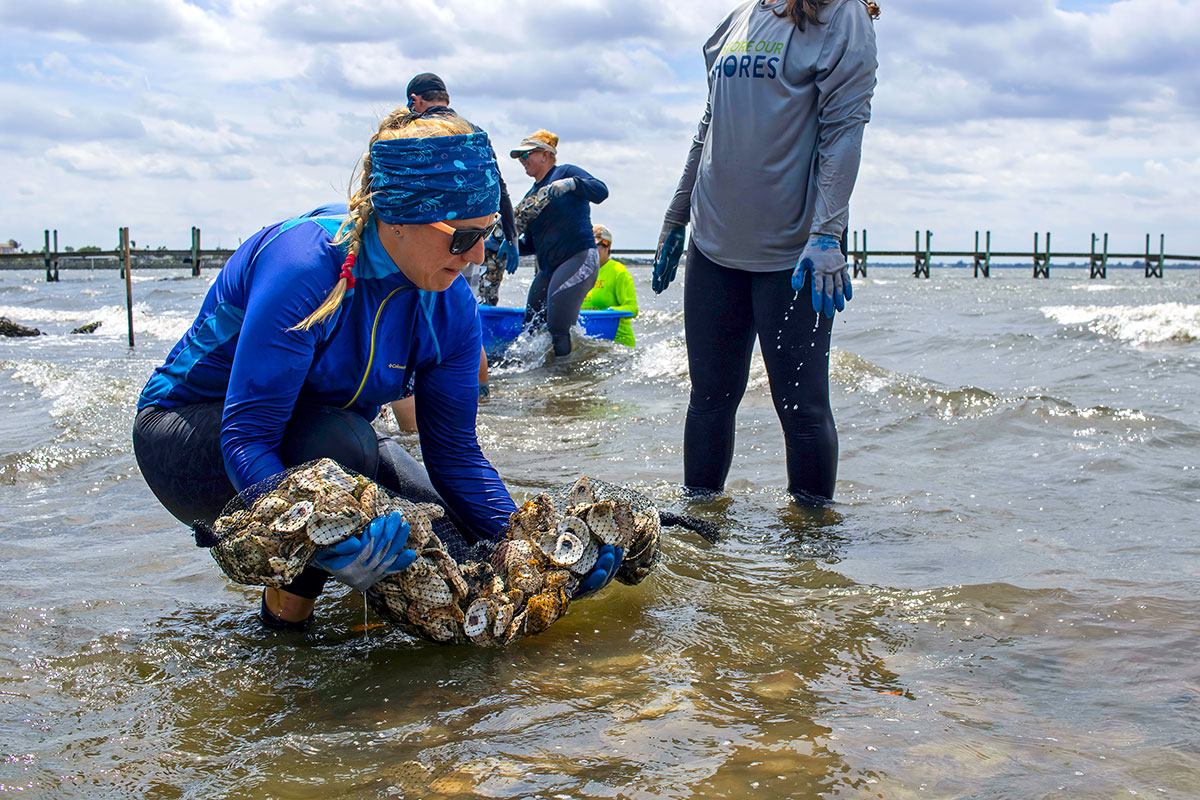 A volunteer for the Share and Shuck program, which is run by the Brevard Zoo, places an oyster bag in the lagoon. BREVARD ZOO

A single oyster can filter 30-50 gallons of polluted water in a day, a tiny clam, as much as 25 gallons. So say scientists working to clean up the Indian River Lagoon in Brevard County. Think of what millions of those bi-valves can do for water quality in the lagoon.

If you have a fish tank, next time it starts to get grungy put a couple of live oysters in it. Rather quickly the water becomes clear again.

To be sure oysters and clams can’t do it all themselves, but they are probably the most cost effective way to help clean the polluted lagoon waters in Brevard County.

Working with grants from the Brevard sales tax devoted to the lagoon cleanup, the Brevard Zoo is transplanting millions of oyster shells into the lagoon, forming oyster reefs along shorelines. The shells become home to oyster embryos, which will begin to work their magic when they mature.

The University of Florida Whitney Lab in St. Augustine is spearheading the clam restoration work and has already placed more than 10 million super clams into the lagoon.

Olivia Escandell, who heads up the oyster project for the zoo, calls the bi-valves the “liver in the river.” Most of the reef building occurs from March to October, which Escandell says offers “the best chance for baby oysters to colonize the reef.”

The oyster work began in 2014, but really picked up steam when Brevard’s lagoon cleanup sales tax kicked in four years ago. The oyster project qualifies for funding, about $45,000 a year. The work is governed by permits from the Florida Department of Environmental Protection. 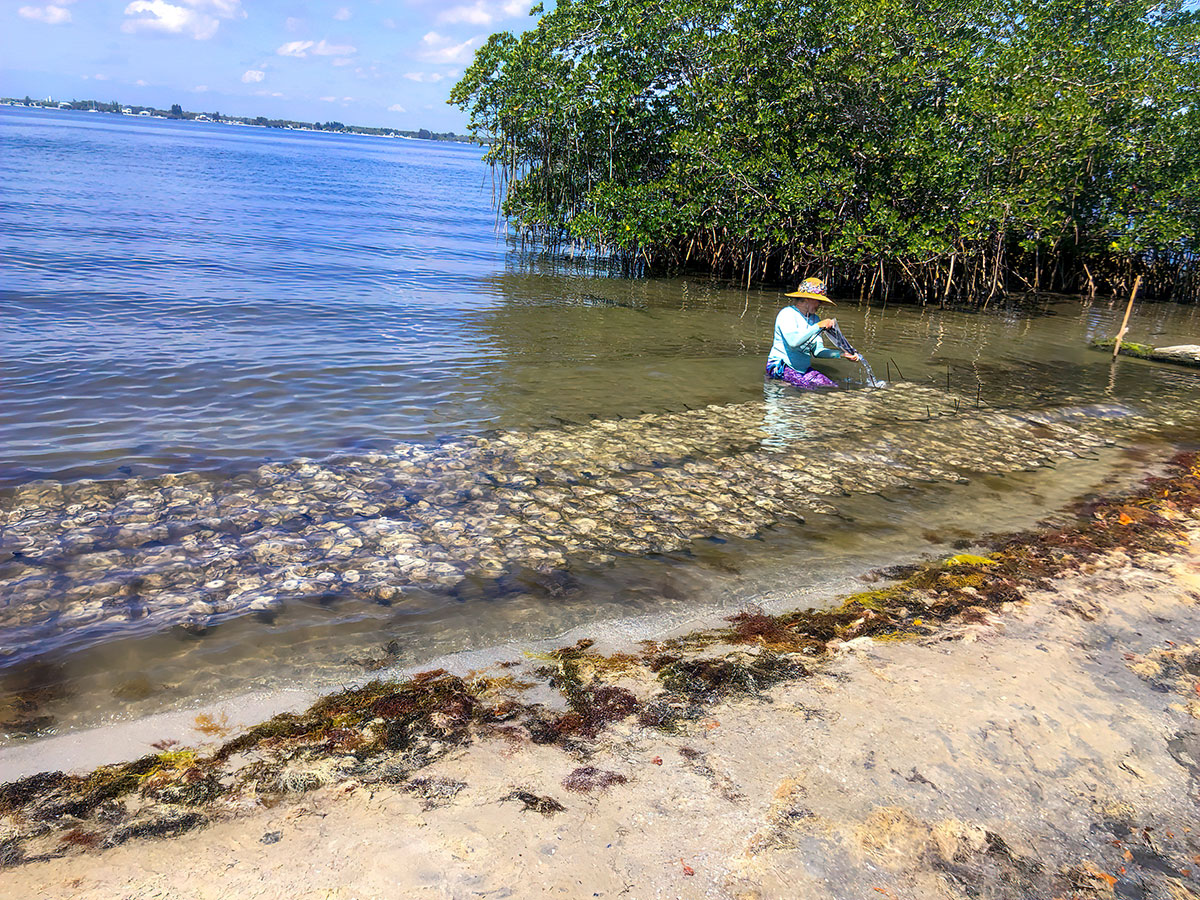 The oyster shells are donated by 20 restaurants in Brevard County and Southeastern Seaproducts of Melbourne, a commercial oyster shucking house. The restaurants save shells from their oyster meals, and volunteers pick them up periodically. The process gave birth to the name of the project, Shuck and Share. About 27,000 pounds of shells are collected every month.

The shells are quarantined for three months to make sure that they are rid of any organic matter, then they are packaged in mesh bags and deposited in the shallows along the lagoon shoreline. The reef building is mostly done by volunteers, civic organizations, college clubs and business teams. If interested in volunteering, go to www.restoreourshores.org and click on the Volunteer tab.

So far the oyster reefs cover more than 1½ miles of the lagoon shoreline with the ultimate goal of 20 miles, at which point Escandell says they will have a noticeable impact on water quality. 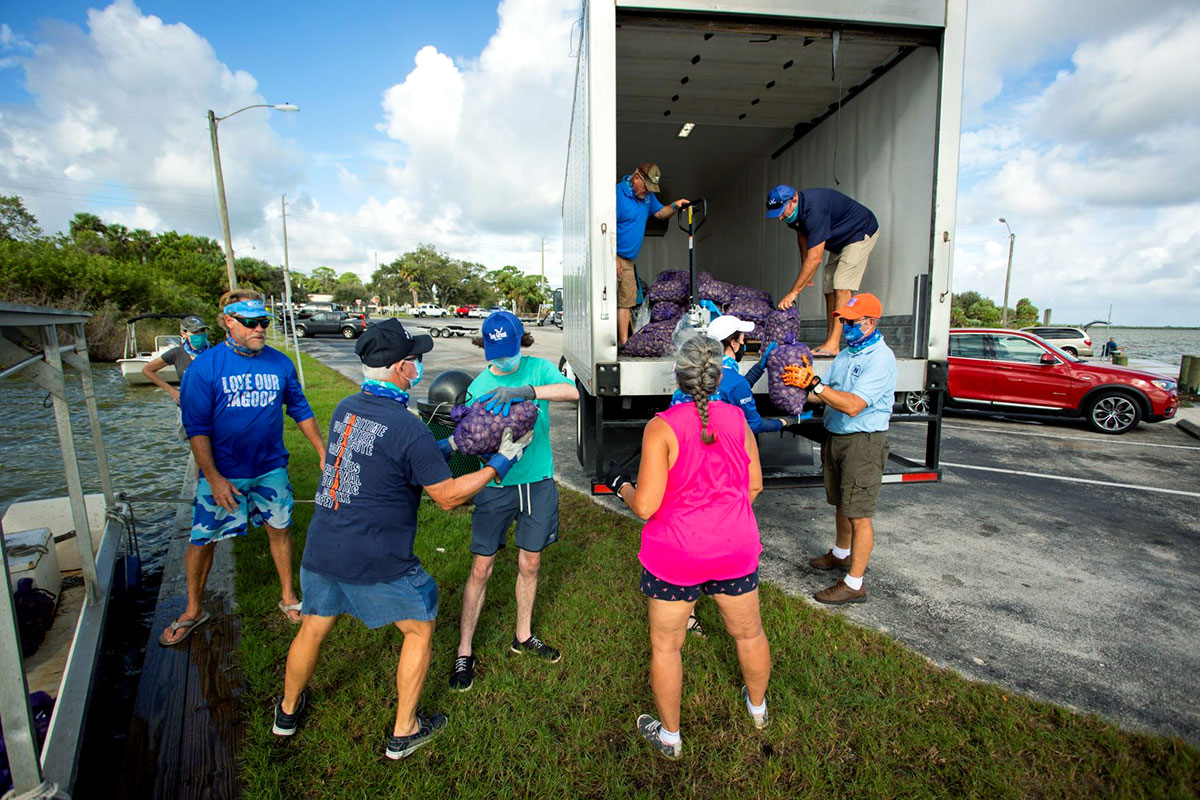 Whitney Lab workers and volunteers unload clams from a refrigerated truck from the breeding labs in St. Augustine for sowing in the lagoon. WHITNEY LAB, UNIVERSITY OF FLORIDA

CLAM COLONIES GROW
The introduction of clams to the lagoon started in 2018. The University of Florida Whitney Lab found the only surviving remnants of once widespread clam colonies in the lagoon. Poor water quality killed off most of the clam population, leading the few survivors to be dubbed Darwinian natural selection super clams by project leader Todd Osborne, who is known as the clam master.

“Reintroducing clams, and especially those clams adapted to the way [the lagoon] is now, should be a huge step in the right direction for improving our water quality,” Osborne says.

University researchers used the super clams to breed huge colonies of clams that are relocated into the lagoon at seven different locations in Brevard County. To date, the more than 10 million clams transplanted into the lagoon are expected to breed and expand the population.

According to Osborne, “We have found clam larva in the lagoon so we know it’s working. They’re doing it. They’re reproducing.”

He also reports that another positive sign is that the clams have survived the lagoon’s most recent algae bloom.

Funding for the clam project comes from grants from a variety of sources, and the budget next year is approaching a million dollars. 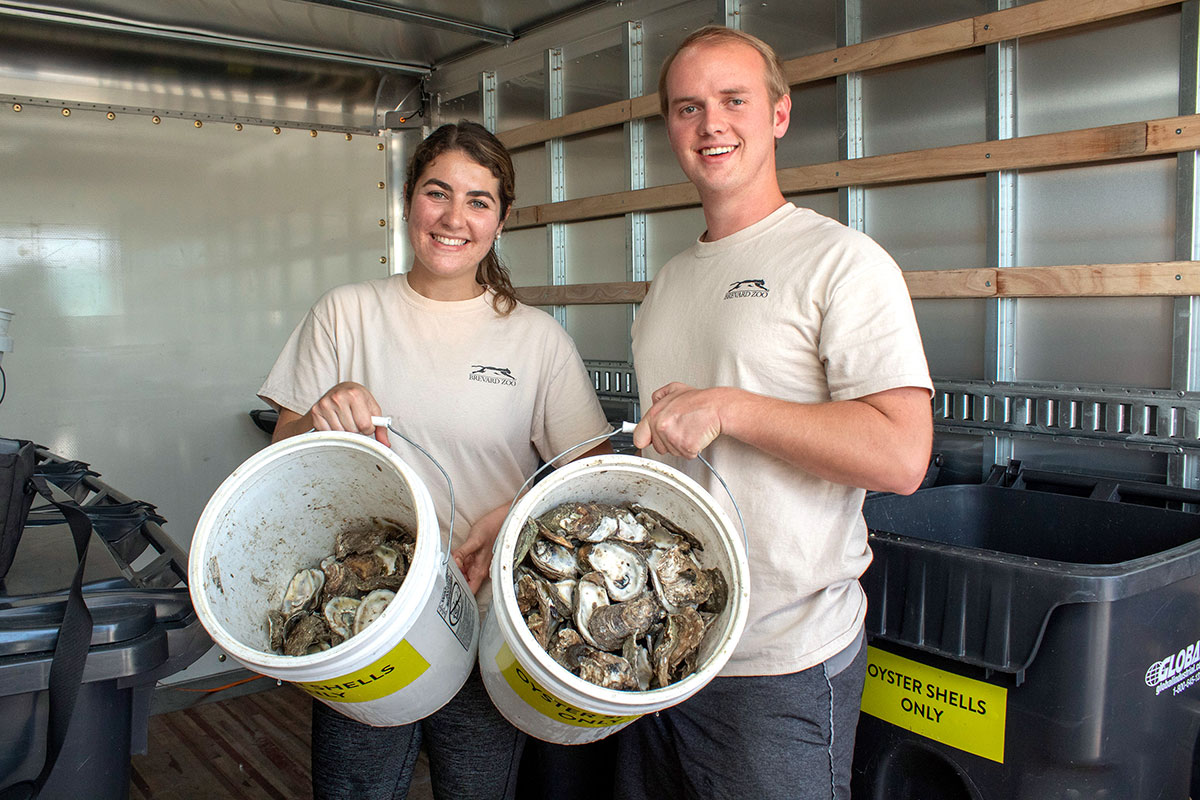 That works out to $100,000 for a million clams, and next year they plan to place 8 to 10 million more clams in the lagoon. Most of that budget pays for staff time, boats and clam transportation in refrigerated trucks from the breeding labs in St. Augustine.

For the future, Osborne says they intend to expand the clam project to other lagoon sites in the Fort Pierce and Port St. Lucie areas.

Osborne calls the clams and oysters just one treatment for a large disease. Pollution of the lagoon comes from many different sources and there is not one particular solution.