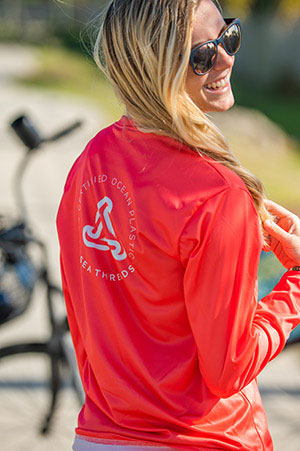 The world’s first apparel line made of 100% recycled ocean plastic hit the market on June 8, 2021, World Oceans Day.  Sea Threads is the brainchild of CEO and Founder Dylan Cross. Dylan began concepting Sea Threads while still a student at Florida Institute of Technology.

Each shirt is made from one pound of ocean plastic. The shirts themselves are being designed and produced in Florida.

“The best way to get plastic out of the ocean is to make sure there is a strong enough demand for products that can be made from it,” said Cross.  “We are rolling up our sleeves, literally, here at Sea Threads, to make that happen.”

Their first run of product has already resulted in an estimated quarter-metric ton of plastic removed from the ocean. According to Sea Threads, all materials are certified for sourcing 100% ocean plastic by the Global Recycle Standard, NSF International, UL, and Zero Plastic Oceans in partnership with Oceanworks.

“Not only is this recycling,” said Cross, “Using Ocean plastic also removes the need for fossil fuels and energy in producing new plastic. With so much in our oceans why not put it to good use instead of continuing to make more?”

Additional environmental impacts include one tons of avoided carbon footprint (CO2e) and five hundred kilograms of carbon dioxide (CO2) avoided.  Nearly one thousand five hundred and 25 million BTUs of energy were saved.  The use of 171 gallons of oil were avoided and 203 cubic feet of landfill space was saved.

“I know that there are many others passionate about this issue and I’m excited to offer them the opportunity to be part of the solution. Sea Threads is much more than a shirt company. It is the start of a world-wide community effort to save our oceans.”

June 8, 2021, marked their first official launch and invitation to the public to join their efforts in a national Kickstarter campaign. Sea Threads outdoor performance shirts went on sale for $35 at Seathreads.co/kickstarter.