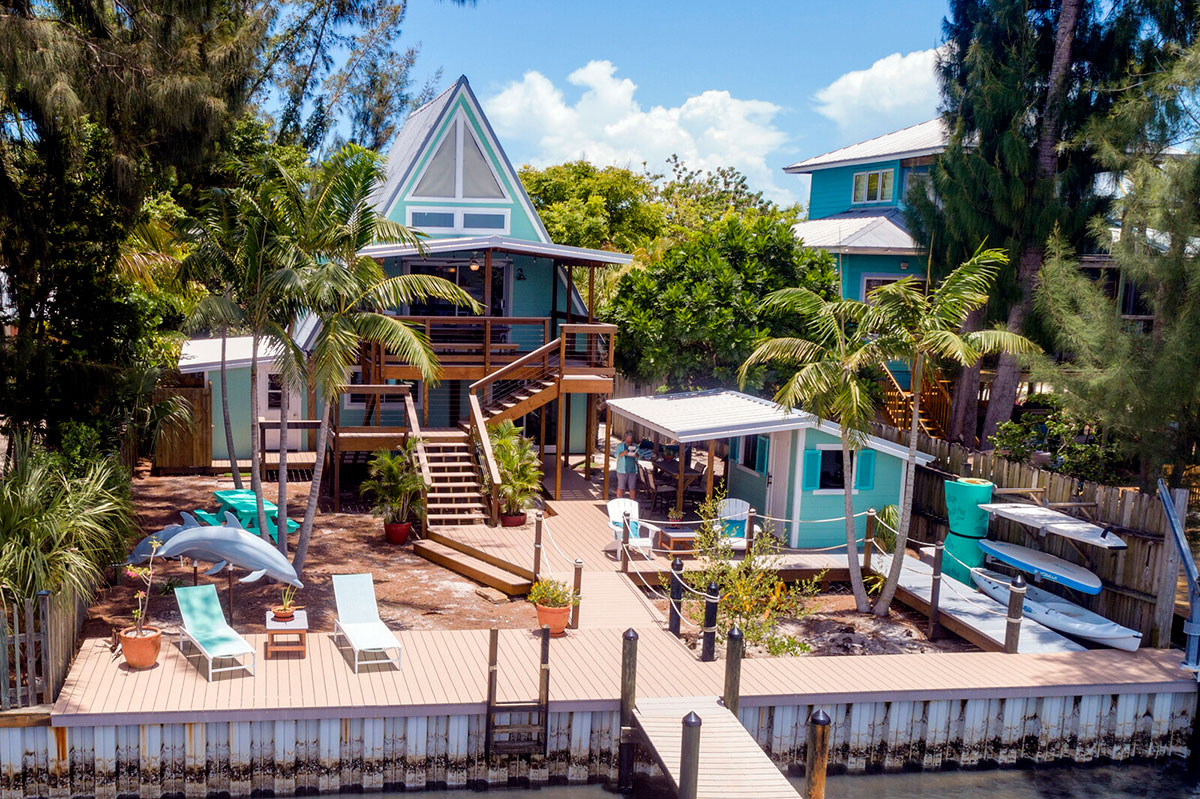 A few houses down from his home, Foster’s Dolphin Dive B&B welcomes tourists with lodging, a free-standing beach bar and a deck for sunning. JERRY SONNENBERG PHOTOS 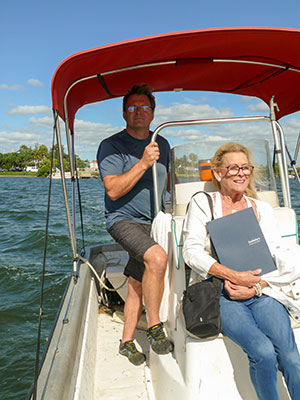 Joe Foster ferries folks such as real estate agent Gail Fischer, of One Sotheby’s International, to his favorite spot on Earth, Grant Farm Island in the Indian River Lagoon.

For years, Joe Foster has had to ferry everything that comes in and out of his house — from refrigerators to kitchen trash — via boat. For Foster, it’s a small price to pay to realize the dream of many: to live on an island.

Foster lives on Vacation Island Paradise, a tiny horseshoe-sliver of land with several names. Also known as Grant Farm Island, or VIP Island, this unique enclave of 65 homes is geographically just a five-minute boat ride from the South Brevard mainland, but mentally miles from the routine hassles of life.

A 50-acre part natural, part spoil island created from dredging of the Intracoastal Waterway, VIP Island is one of the few inhabited islands in Florida accessible only by boat.

When it was first developed, the grand plan was to build causeways from the island to the mainland and the beaches. Thankfully, those plans never materialized. 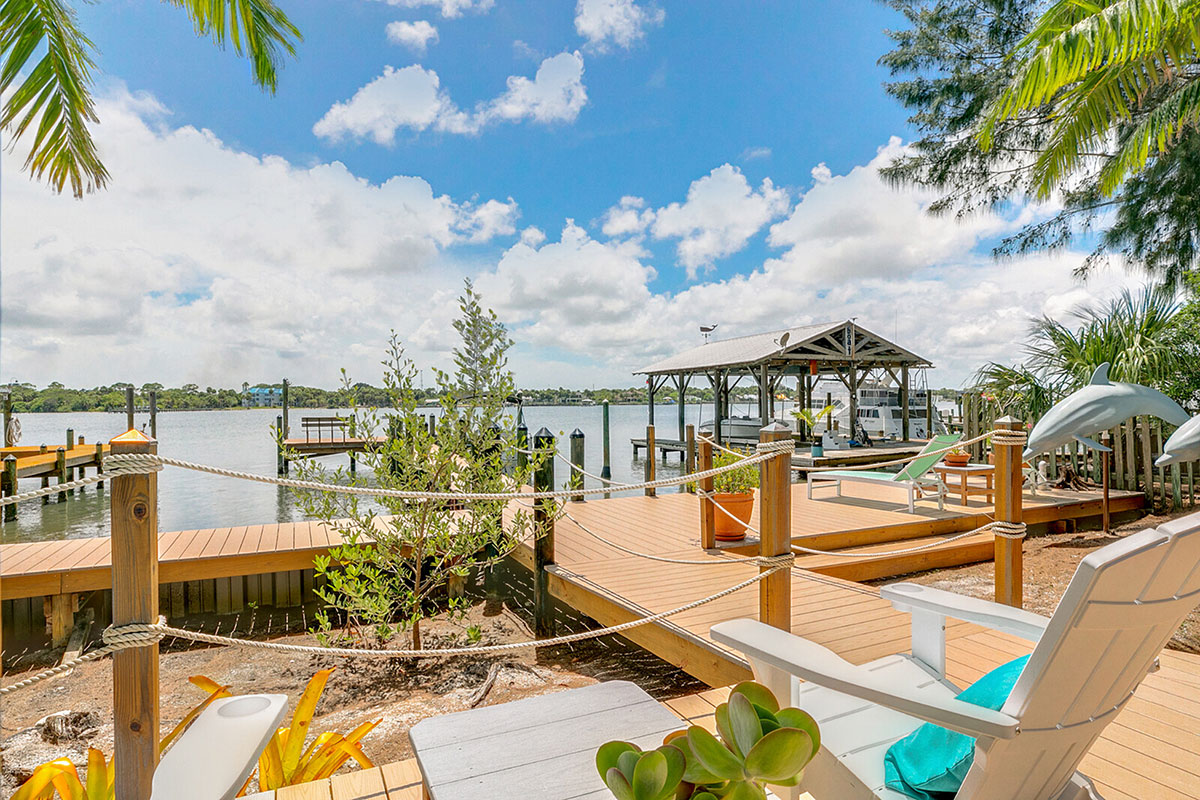 LOVE IT OR LEAVE IT 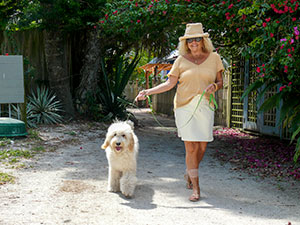 An islander since 2007, Lanny Davidson, here with canine gal pal Willamae Doodle, was introduced to the island by her late brother, Mack.

For real estate agent Gail Fischer of One Sotheby’s International, selling island property is both a pleasure and a source of frustration.

She feels she is more on vacation than at work when she enlists Foster’s boat to shuttle prospective buyers over, but problems arise trying to find comparable homes to gauge current value.

In spirit, Grant Farm Island real estate is more simpatico with that ultimate arbiter of coastal shabby chic, Key West, than with the manicured homes of Viera or Vero Beach. Every house is different, but all seem in a continual state of evolution as residents tinker with them.

The cottages run the gamut of the pastel palette and are as eclectic as the people who inhabit them. Under the magic of the island, half of a cast-off boat becomes a surprisingly cool-looking awning. A couple of old oars become a stair railing and look mighty fine. Gates fashioned from old weathered wooden signage assume unexpected gravitas.

Louisiana gal Lanny Davidson became a Grant Farm Islander in 2007, after her brother, Mack, encouraged her to settle there instead of in the French Quarter, where she was searching for new digs.

“My girlfriends wondered what I was going to do there without a Saks Fifth Avenue,” Davidson said.

She has coped remarkably with that particular hardship in the little cottage she has adorned with the artwork collected by her late brother. From her bed, she can engage in a spot of boat watching as the yachts slide by.

Her garden beckons with an unlikely profusion of both bougainvillea and roses. Daybeds in her screen porch are guest magnets, so there are always plenty of friends to join her and her canine sidekick, Willamae Doodle, on the huge deck under the palm trees and Australian pines. Conversely, should Willamae’s human crave solitude, Grant Farm Island provides.

“You don’t have to see anybody if you don’t want to,” said Davidson. 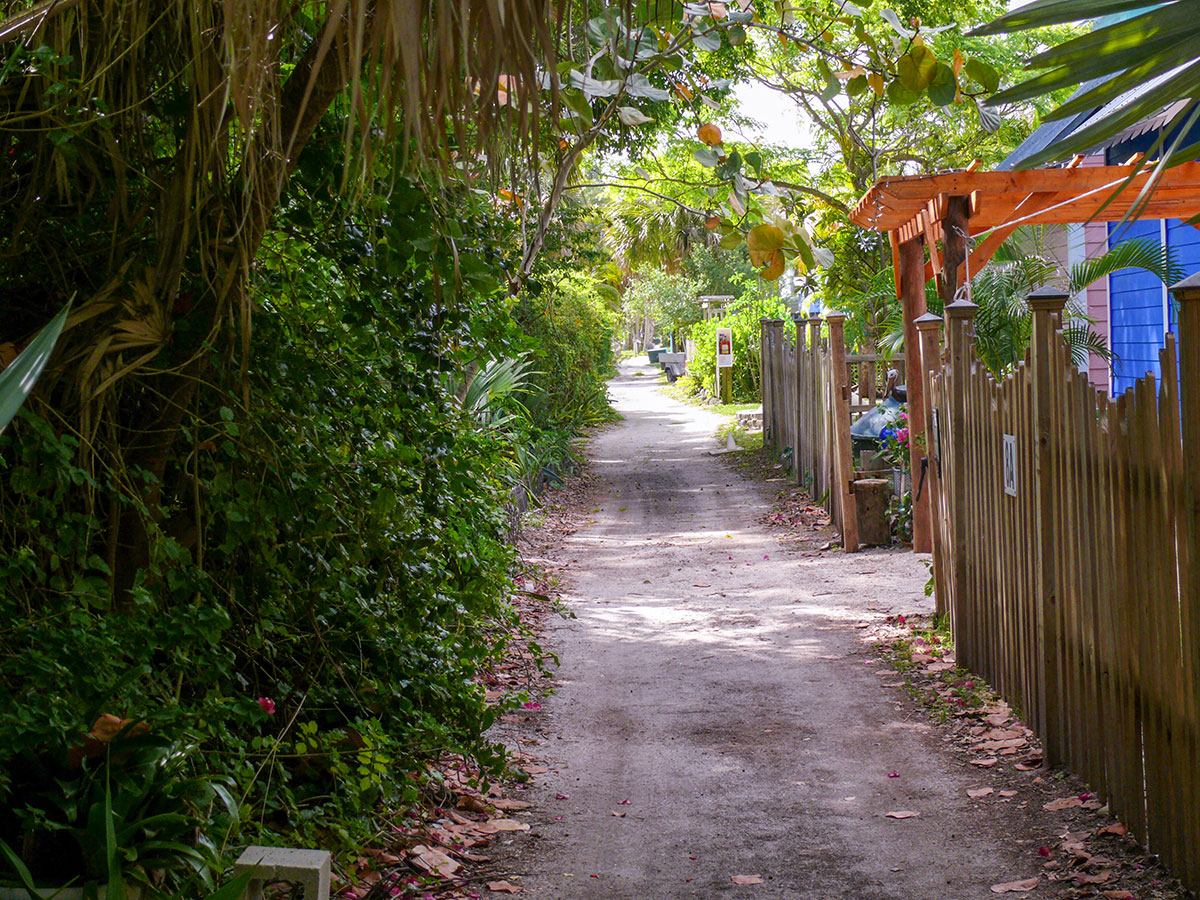 This is rush hour on Grant Farm Island’s Main Street. 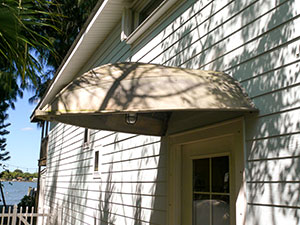 Half an old boat becomes a unique awning, thanks to a clever islander.

BUSY WEEKENDS
Weekdays are quiet, as only a handful of residents are, like Davidson and Willamae, full-time. On weekends, the vacation home owners appear, so the island gets lively, but lively is a different word at VIP Island.

Main Street is a meandering sand path traversed by golf carts and beach cruisers. Nary a car is on the island, but you do see fire extinguishers every so often, should a fire ever threaten.

Fischer has found that island buyers either adore it or don’t want anything to do with it.

“There are buyers who come out and look and I never hear from again, while others go out and fall in love immediately,” she said.

“Who cares if you have to boat over?” 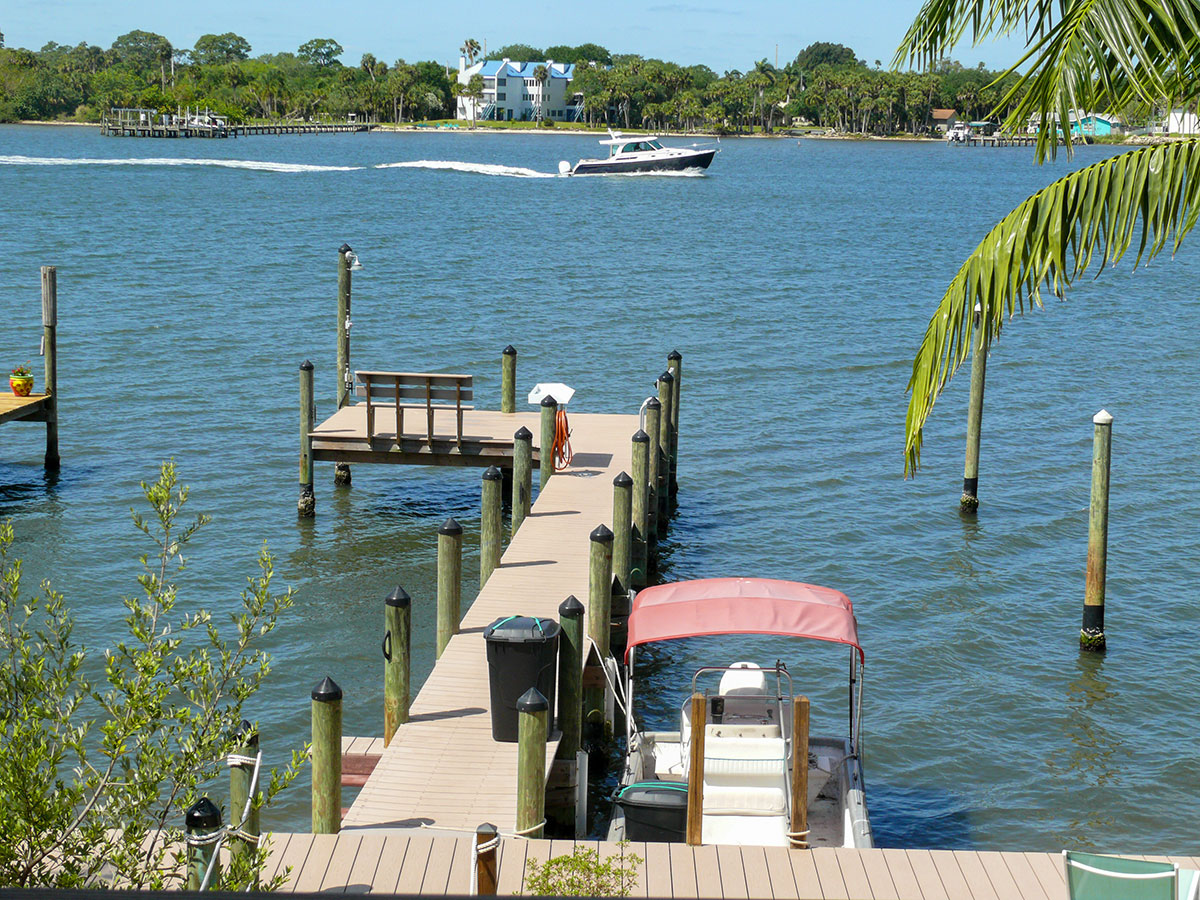 Boat-watching replaces people-watching on the Island.

STILL AFFORDABLE
Considering the crazy real estate market, paradise remains affordable at Grant Farm Island. Homes range from half a million to $800,000 on the more developed part of the island. Those with more wherewithal can opt for a $4 million-plus enclave for sale on an acre lot at the other end of the island.

A few houses down from his own is Foster’s B&B, Dolphin Dive. The three-story, four-bedroom home features a covered, self-enclosed beach bar with a 33-pound ice maker and a television; a spa; and a dock that welcomes vessels up to 35 feet in length. At $300 a night, it is popular with families and reunions eager for a taste of island living at very reasonable rates.

Foster first became acquainted with Grant Farm Island when his parents bought a vacation place there in 1978. He left for college and later followed a job to South Florida, but the island kept calling back.

His two boys grew up being boated to school and Scouts. Now in college, they still love returning. Foster’s parents continue to own a couple of island lots. It seems that once VIP Island is part of your life, you never really leave.

Like 90 percent of island residents, Foster owns a boat that distances him from the different world that is the mainland.

“I call it going back to America,” he said.

Living on the island is not all sunshine and dolphins, however, and does require a different approach to life.

Don’t expect an Amazon driver at your door. Forget the recycling truck. That new dishwasher will necessitate the use of one of the island barges for transport.

Tradesmen willing to work on the island are sometimes not easy to find. Health emergencies may require a helicopter. A storm could sideline your trip to Wal-Mart. Kids occasionally get soaked on their way to school. These are merely inconveniences.

The different lifestyle paradigm needed is well worth it.

“It is paradise,” Fischer said.