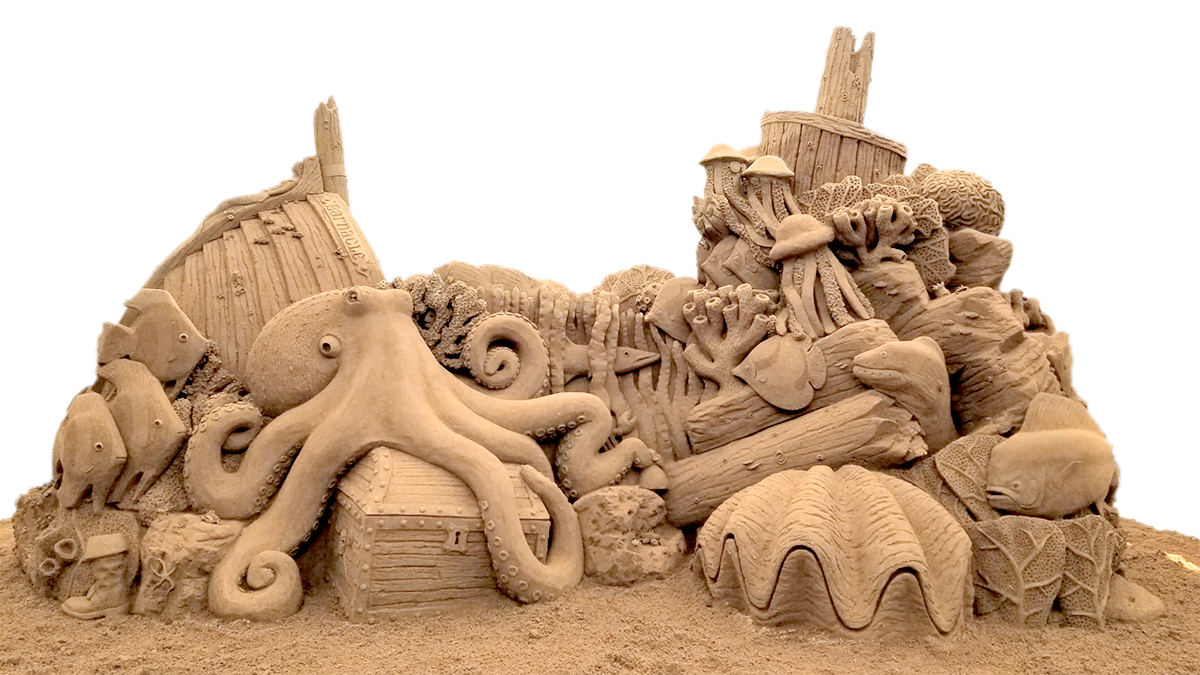 Under the Sea sand sculpture created for the Edgewater Mall in Biloxi, Miss. JILL HARRIS PHOTOS 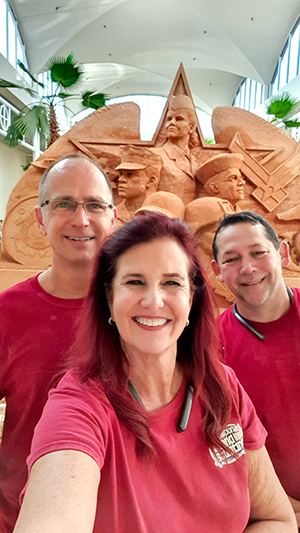 Sand sculptors Koet, Jill Harris and Woodworth pose in front of one of their sand sculptures under construction.

Jill Harris found fame, fortune and romance, all in a grain of sand.

OK, it was really a whole bunch of grains of sand, but it was sand, nevertheless.

Harris, who together with her husband, Thomas Koet, operates Sandsational Sand Sculpting in Satellite Beach, is a professional sand sculptor, that rara avis of the art world.

When passersby spot her working on some of the massive installations Sandsational creates around the world, they sometimes express envy because they believe she is being paid for playing with sand. Harris outwardly smiles, and inwardly goes “Ha!”

Sand sculpting, according to the World Sand Sculpting Academy in The Netherlands, is anything but play. It is an art form and a difficult one because the medium consists of just sand and water. Nothing else. No permanent structural supports are used.

Since a sculpture can require as much as 100 tons of sand, there is a lot of shoveling as well as pounding sand to prepare it for sculpting.

“It’s hard on the joints and your hands turn to Velcro, they’re so chapped, everything sticks to them,” Harris said.

The rough work is often done after dark, away from curious viewers.

“You’re working tons of sand in the middle of the night and it can be raining,” Harris said. “Sand sculpture is not for the wimpy. It’s hard work.”

While tough on the body, professional sand sculpturing is good for the psyche. Harris would not trade her job for anything. She fell in love with the art form a quarter of a century ago when a friend sought her help building a sculpture.

“I volunteered to shovel and I was hooked,” she said.

She soon went pro. During an installation in Belgium, she met her Dutch husband, who has a master’s degree in industrial design and was doing sand sculpture as a hobby. 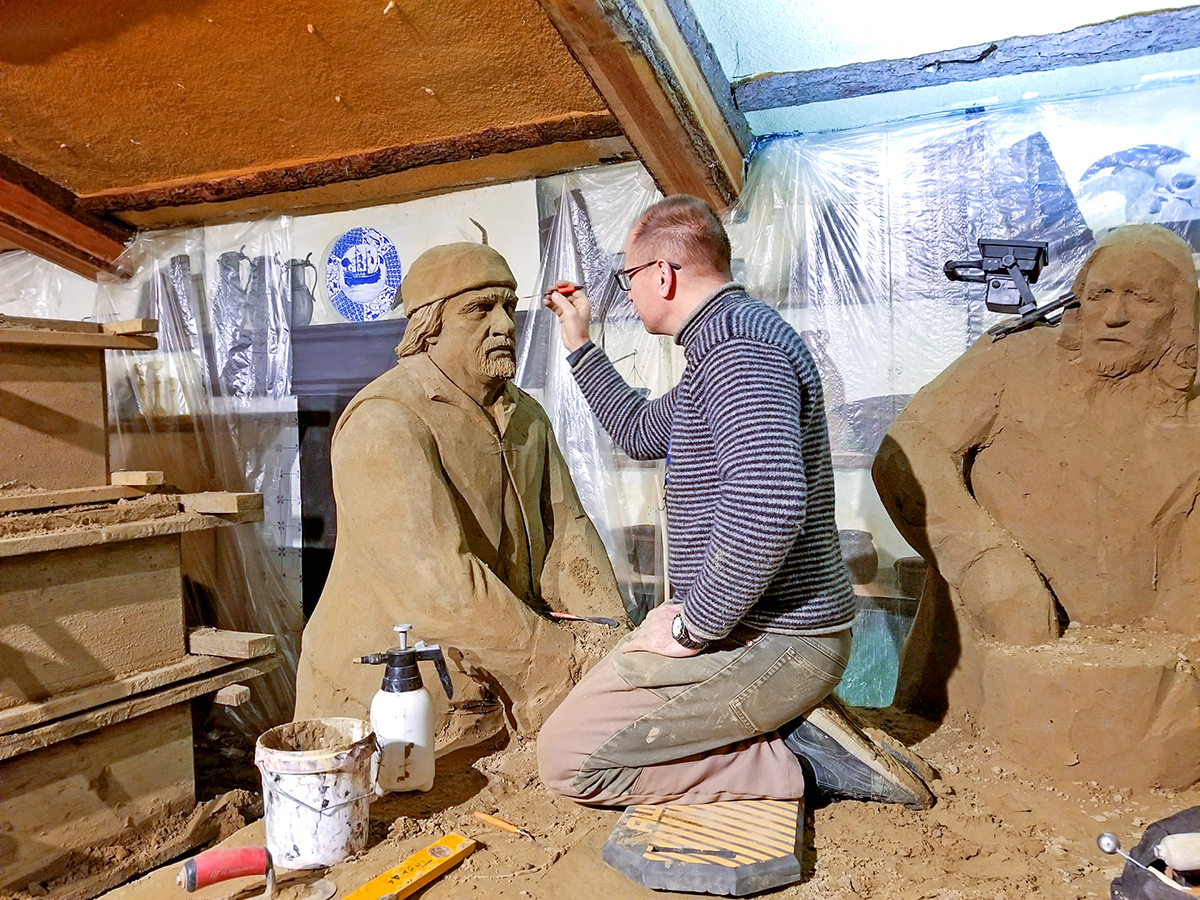 Koet of Satellite Beach works on an installation in The Netherlands.

Thanks to sand, the couple travels the world, visiting resorts, malls, botanical gardens, zoos and festivals to create new sculptures. For example, if the coronavirus cooperates, the couple is planning to spend a few weeks this month in Hawaii before heading to The Netherlands, a hot spot for sand sculptures, for a month. Then it’s off to Japan for a couple of weeks in the spring.

They also travel around the country creating sculptures at grand openings and corporate commissions for such companies as Coca-Cola and Pepsi. Sandsational’s sculptures also have been featured on the Travel Channel.

In Brevard, Ron Jon Surf Shop is a longtime client, as is the Brevard Zoo, which is showcasing a dozen sculptures through April. The exhibition, Life Beneath Our Sea, features a dozen sand sculptures of turtles, sharks, manatees and other denizens of the deep. 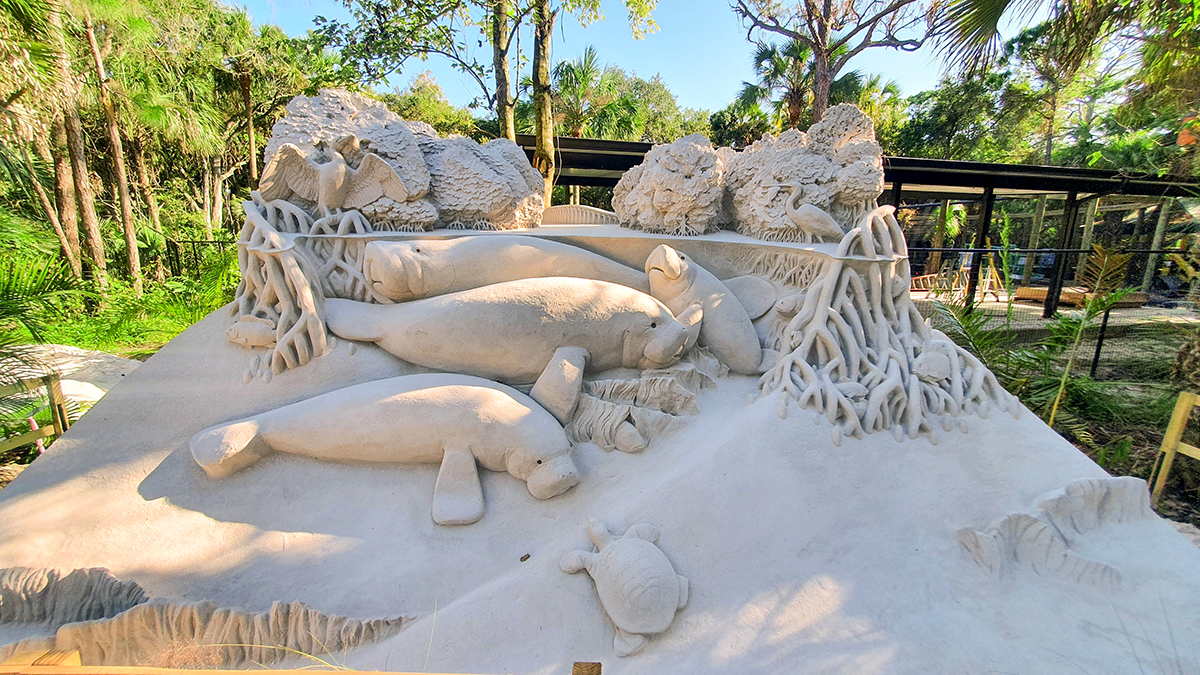 Mangroves and Manatees, a Sandsational sand sculpture for Brevard Zoo.

Tools of the trade are straightforward. Trowels, palette knives and the like are all that is needed. The sand is the key. Forget using beach sand, which typically contains none of the desired silt or clay and has been rounded by the tides and winds.

“The grains need to be sharp or spiky, so they bond together,” Harris explained.

In Florida, this desirable sand can be found around the glacial ridge of the state, in quarries such as one in Winter Haven. The sand is trucked to a site, poured into a series of frames and hand- or machine-tamped until compact. A smaller frame is placed atop the first and the process is repeated until the desired height is reached. Frames are removed, top to bottom as the sculptor works. The end result looks like a huge wedding tree.

The breadth of talent is breathtaking. Under their able hands, anything is possible, from larger-than-life-sized tableaus of a Wild West bar to a forest full of creatures or a scene of Dorothy and pals on the Yellow Brick Road. 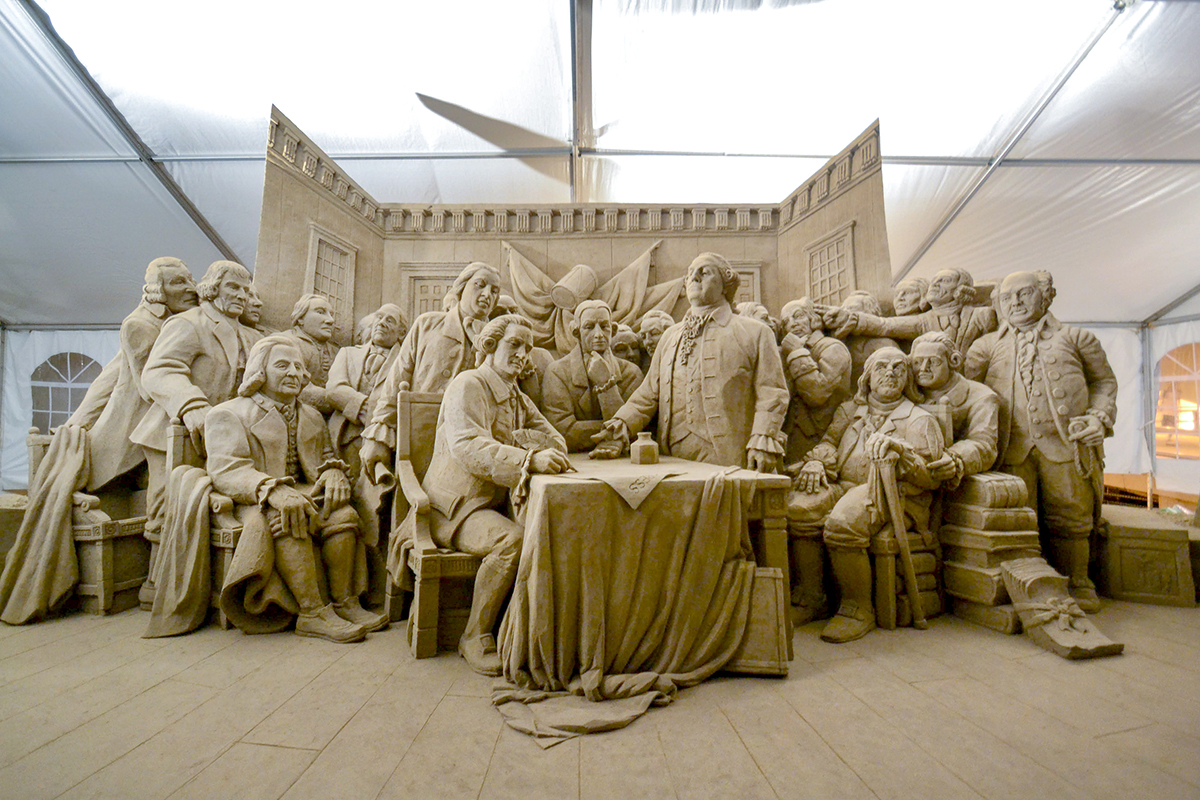 The massive Signing of the Declaration of Independence, one of Harris’ favorite creations, was installed in Pittsburgh.

Among Harris’ personal favorites is a depiction of the signing of the Declaration of Independence. All the Founding Fathers are there in 10-foot sandy splendor, as is the famous document, an edge of which realistically drops down the side of the table as John Hancock signs with a flourish.

Viewers can’t seem to wrap their heads around the idea that the whole thing is made with just sand. It can create a problem for the sculptors because people often act on the need to touch the sculptures to ascertain that it is, indeed, just sand.

“They just want to touch and they go straight for the faces,” Harris said.

Only a foolish sculptor would not place fencing between the sculpture and the audience.

The sky is literally the limit when it comes to subject matter and size. One of Harris’ sculptures, a six-story castle tower, held the world record for height, until another sculptor created a taller one and then another artist surpassed that. 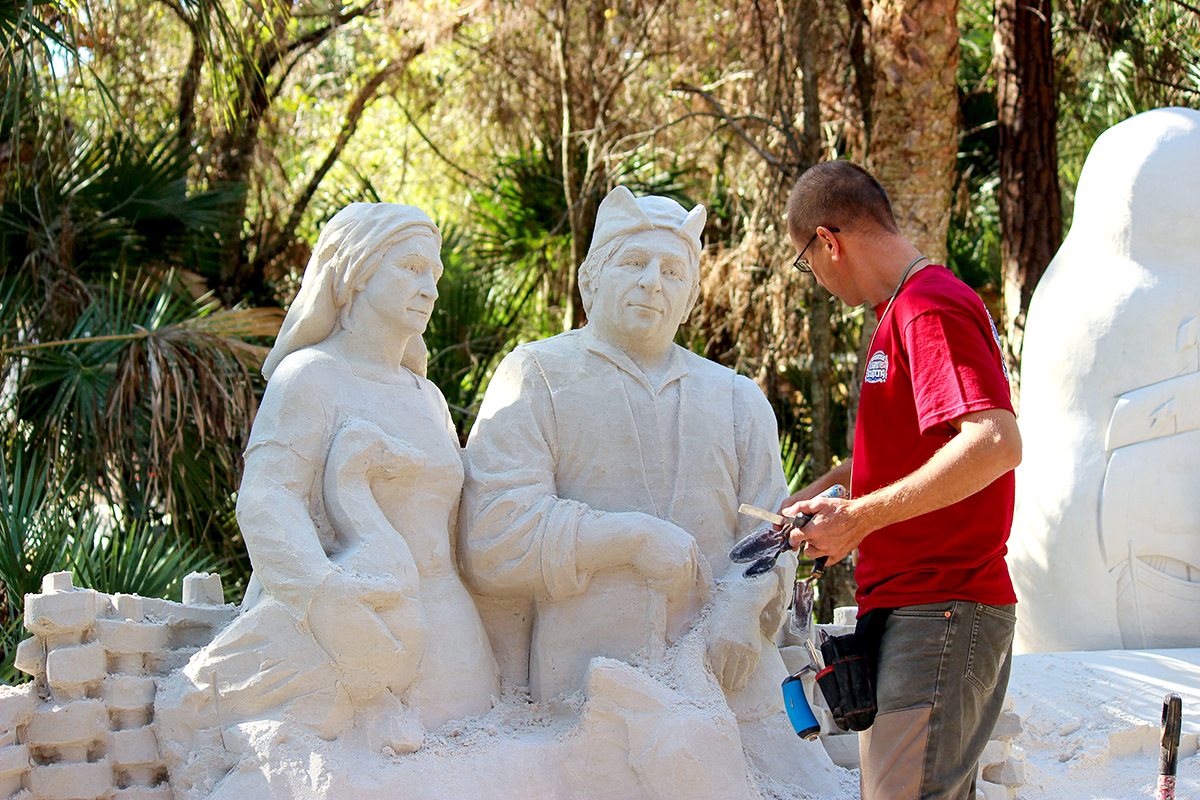 Koet works on a sand sculpture at Brevard Zoo where it and a number of other sculptures will be on display until April.

Sculptures can routinely rise to 30 feet; the artist works from the top down, using a series of ledges that encircle the sculpture. As the artist progresses down, the rudimentary scaffolding is removed so at the end the sculptor is on firm ground.

Sand sculpture is also part performance art, for the artists are often expected to interact with the public, who love to ask questions.

Harris and Koet are so in demand because clients realize how much of a people magnet their creations can be. While amazingly complex, these sculptures also connect viewers with their childhood.

“Everyone can relate to building a sandcastle,” Harris said.

While ultimately ephemeral, the sculptures are surprisingly long-lasting. Brevard Zoo’s sand creatures will be on display through April, only needing weekly touchups to fix imperfections caused by errant squirrels or pine needles.

“They can last up to six months,” Harris said.

Like all sand sculptors, Harris accepts the transitory nature of the art.

“We compare it to performing a concert or cooking a gourmet dinner,” she said.

“It’s for the moment and that is what we like.” 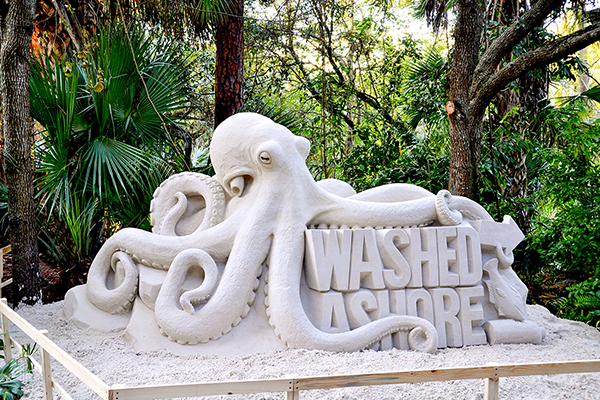