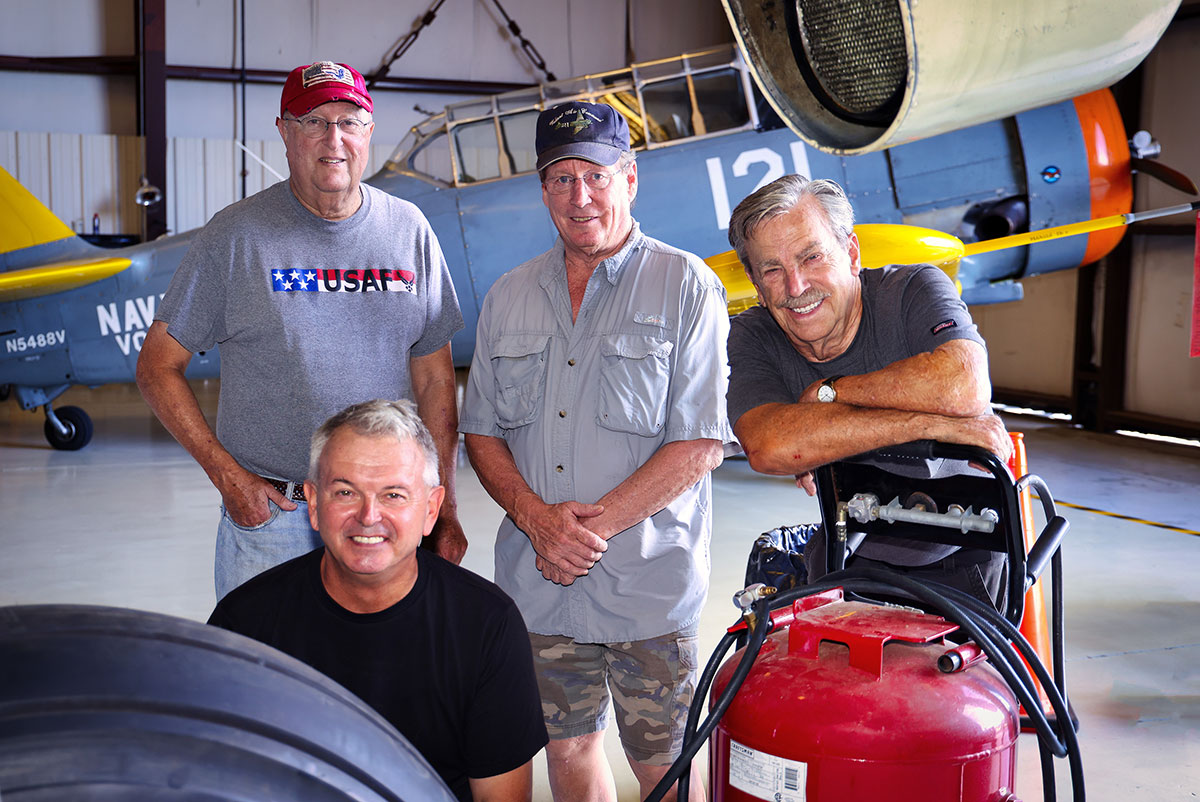 They are about grace under fire, about bravery and courage. They capture our collective imagination with their heroics and history. They are the warbirds, the name given to vintage military aircraft. 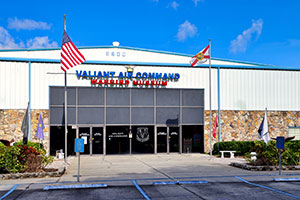 The Space Coast Regional Airport, which owns the land where the museum sits, has provided an additional seven acres for expansion.

At the Valiant Air Command Warbird Museum in Titusville, the 50-plus planes in the collection attract an adoring crowd that do not begrudge the constant attention needed to keep these metal birds looking good despite the passage of time. More than 100 volunteers young and old happily give their time to these machines, restoring them, maintaining them, flying them and interpreting their heritage to museum visitors, many of whom were born decades after the warbirds saw action, yet remain enthralled by these old planes.

Grounded for months because of the pandemic, the museum and its collection are ready to fly again, with plans for expansion and for additional events that connect the public, sometimes in eclectic ways, with the historical planes.

The popular Fly-In Breakfast, for example, is back from 8 to 10 a.m. on the second Saturday of the month. About half of the guests arrive by private plane, but the rest drive in for a $12 chef-prepared repast that includes omelets, pancakes, bacon, sausage and other goodies from Divine Caterings of Titusville. 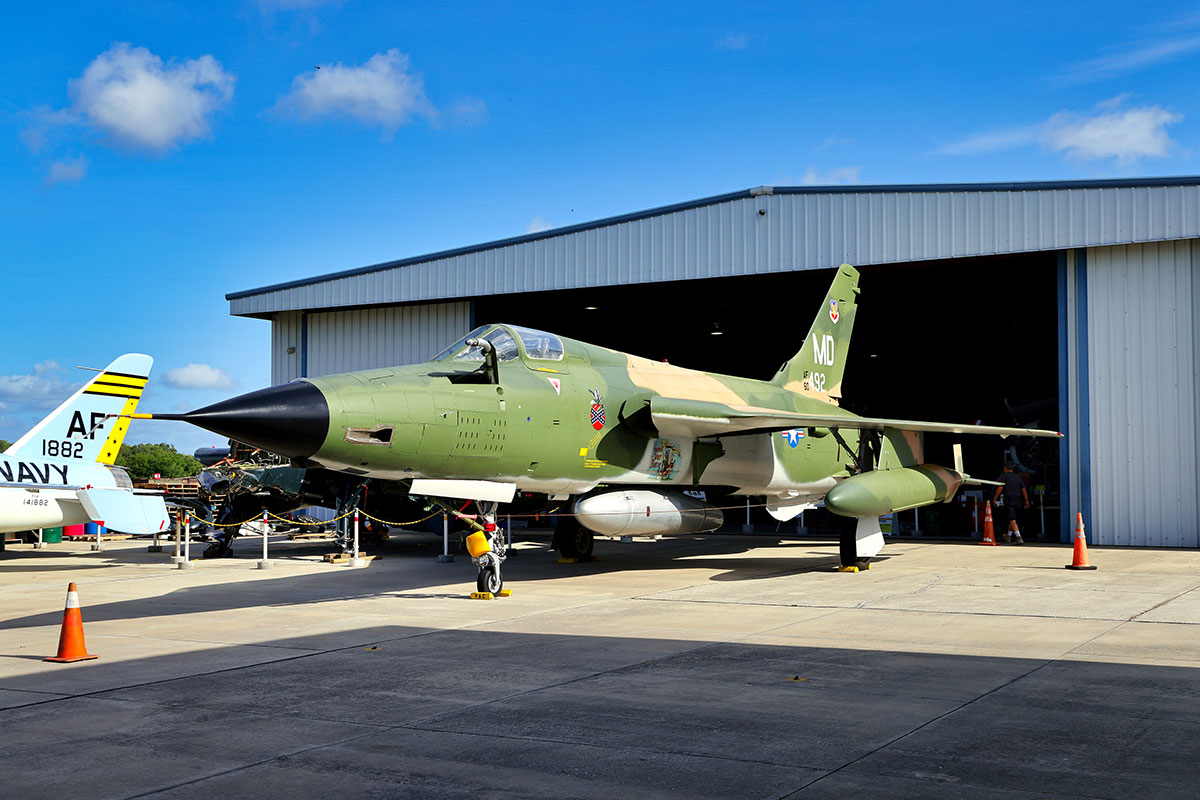 Founded in 1977 by a group of aviation enthusiasts, veterans and pilots, the Valiant Air Command Warbird Museum in Titusville showcases more than 50 warbirds.

After chowing down, visitors stay as long as they wish to savor the museum at their leisure, since admission is included in the price, a bargain, considering adult admission is regularly $20.

Piloting the museum are commander Norman Daniels and executive director Bob Boswell. Both are volunteers, as are the rest of the crew that keeps the facility going. Only one part-time administrative assistant receives any form of compensation beyond the joy of being near the warbirds.

VOLUNTEERS HAVE SERVED
Approximately 700 members from throughout Central Florida help support the operation, which runs on private donations, museum admission and revenue from special events such as weddings and retreats. 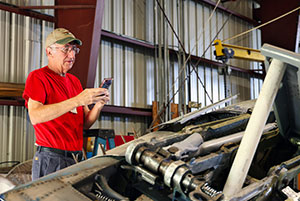 Jim Bouck uses smartphone technology to work on an F-11.

The men and women behind the warbirds have histories as colorful as those of the planes they adore. Retired Air Force Col. Bob Boswell spent the Vietnam War as a combat forward air controller. His duties included spotting the enemy from a single passenger plane while trying to avoid heat-seeking missiles and radar-directed weaponry that could easily zero in on a target at the height Boswell needed to fly. 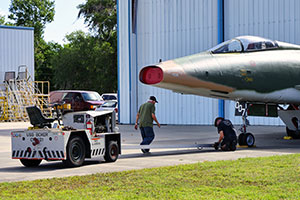 Museum volunteers help move a warbird that is undergoing a restoration. Only one part-time administrative assistant is paid. For everyone else, working on the planes is a labor of love.

After more than 6,000 flying hours in more than 30 different types of aircraft, 24 decorations and a subsequent career as owner of a manufacturing company for amphibian and float plane kits, the Suntree resident spends his retirement on Tuesdays, Thursdays and Saturdays at his post at the museum.

“I work more now than when I worked for a living,” he said jokingly.

One of the biggest regrets in his life was passing on the opportunity to purchase a P-51 Flying Mustang in pristine condition back in the 1970s. 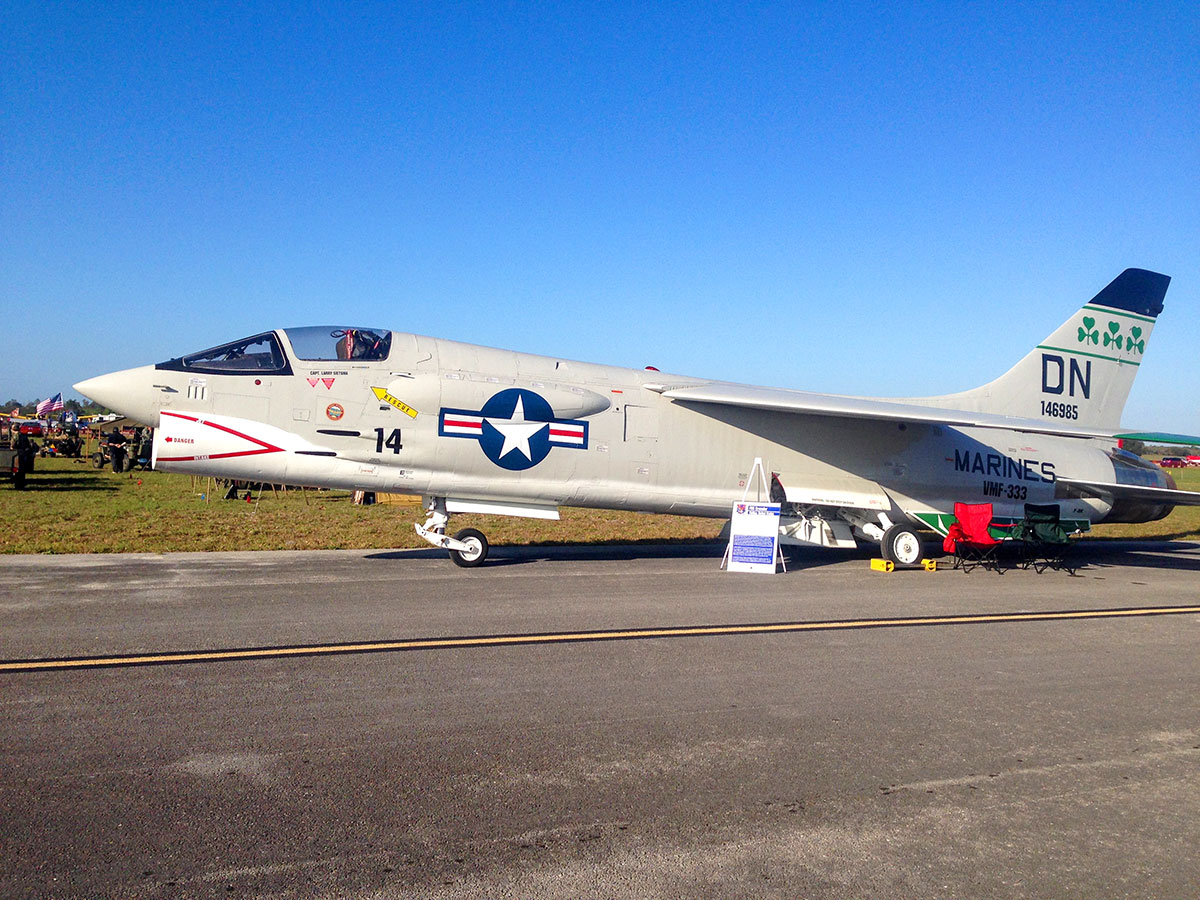 The museum found the F-8K Crusader in Arizona and Sietsma brought it back to life. The process even required a trip to France for extra parts. PHOTO BY LARRY SIETSMA

OWNING A WARBIRD
Unlike Boswell, many pilots could not say no to the opportunity of owning a warbird, once easily available as Air Force surplus. Approximately a third of the museum’s collection is on loan from private collectors. A third is owned by the National Museum of the United States Air Force in Ohio and the rest were purchased by the museum. 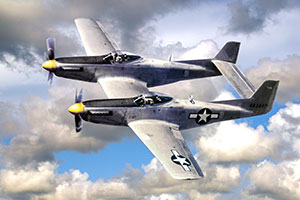 Tom Reilly of Georgia has loaned the museum his XP82 Twin Mustang, one of the rarest, still-flying warbirds in the world. VALIANT AIR COMMAND WARBIRD MUSEUM PHOTOS

Georgia resident Tom Reilly, whose plane restoration school Boswell attended, has loaned the museum its most unique plane, the XP82 Twin Mustang, possibly the world’s rarest plane, or make that two planes, since this strange bird features two Mustang chassis joined at the wing. One of five surviving P-82 Twin Mustangs, the plane is the only one flying of the two in civilian ownership.

Restoring the planes is a labor of love. Larry Sietsma, founder of Holiday Builders, happily gave up a year and a half of his life to the restoration of an F-8K Crusader, the same type of plane he had zipped around Guantanamo Bay and Key West during the Cuban Missile Crisis. 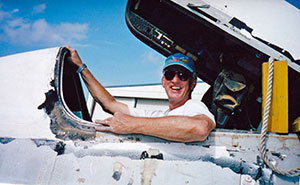 Larry Sietsma spent 18 months restoring an F-8K Crusader, a plane similar to the one he flew during the Cuban Missile Crisis. PHOTO BY LARRY SIETSMA

The museum found the warbird at an Arizona boneyard and Sietsma brought it back to life. The process even required a trip to France for extra parts, since the French were the last to fly this type of aircraft.

“It was totally my baby,” said Sietsma, who still returns to the museum to sit in the Crusader’s cockpit or act as its docent during special events. 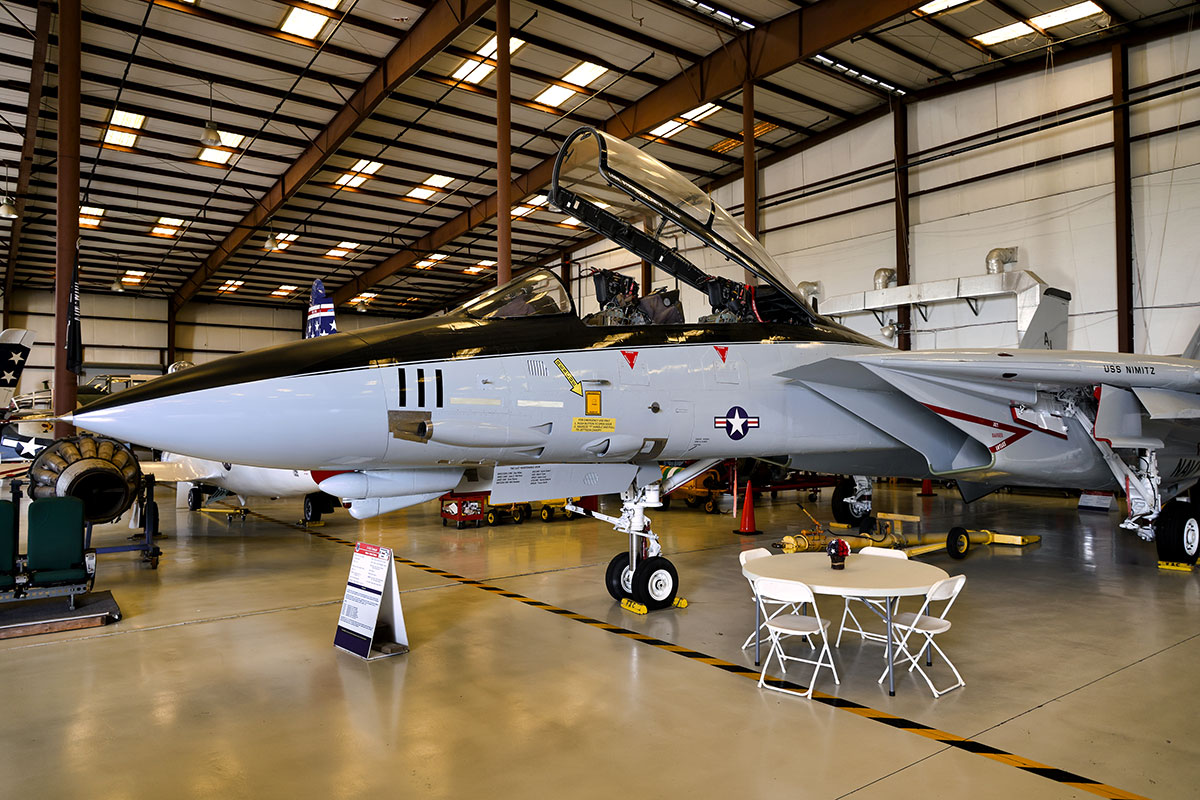 A Grumman F-14 Tomcat from the USS Nimitz can be seen up close at the museum. The Navy retired the Tomcat in 2006.

MAKING A CONNECTION
For some visitors, the planes are old friends. Wayne Belden first met F-105 Thunderchief Serial No. 60492 when his father took him to an airshow back in his Long Island youth. He remembered the serial number because it included his dad’s birthday. 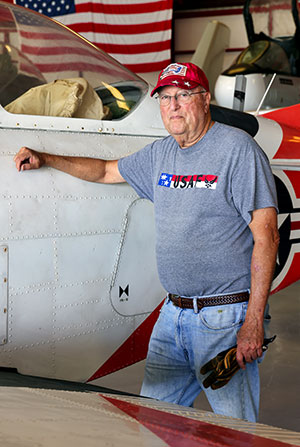 David Shores is volunteer director of public relations and marketing for the museum in addition to working on the museum’s warbirds.

As an enlistee in the Vietnam War, he kept bumping into the same plane in Thailand.

Fast forward decades to Belden’s visit to the museum. Yes, there it was, the same F-105.

“It goes wherever I go,” the Port Orange resident said.

The collection, which ranges from pre-World War I monoplanes to the Grumman F-14A Tomcat, has grown to such an extent that the museum needs to expand.

“You can’t walk through our hangar without hitting a wingtip,” said Boswell.

The Space Coast Regional Airport, which owns the land where the museum sits, has provided an additional seven acres for expansion for an additional hangar/conference center with enough space for 500 people to meet. The building will not only provide additional space for the birds, but also extra revenue from special events such as NASA and Kennedy Space Center vendor conferences.

Fundraising for the new building, plus preparations for the return of the airshow next year, should keep Daniels, Boswell and the rest of the volunteers busy, busy. 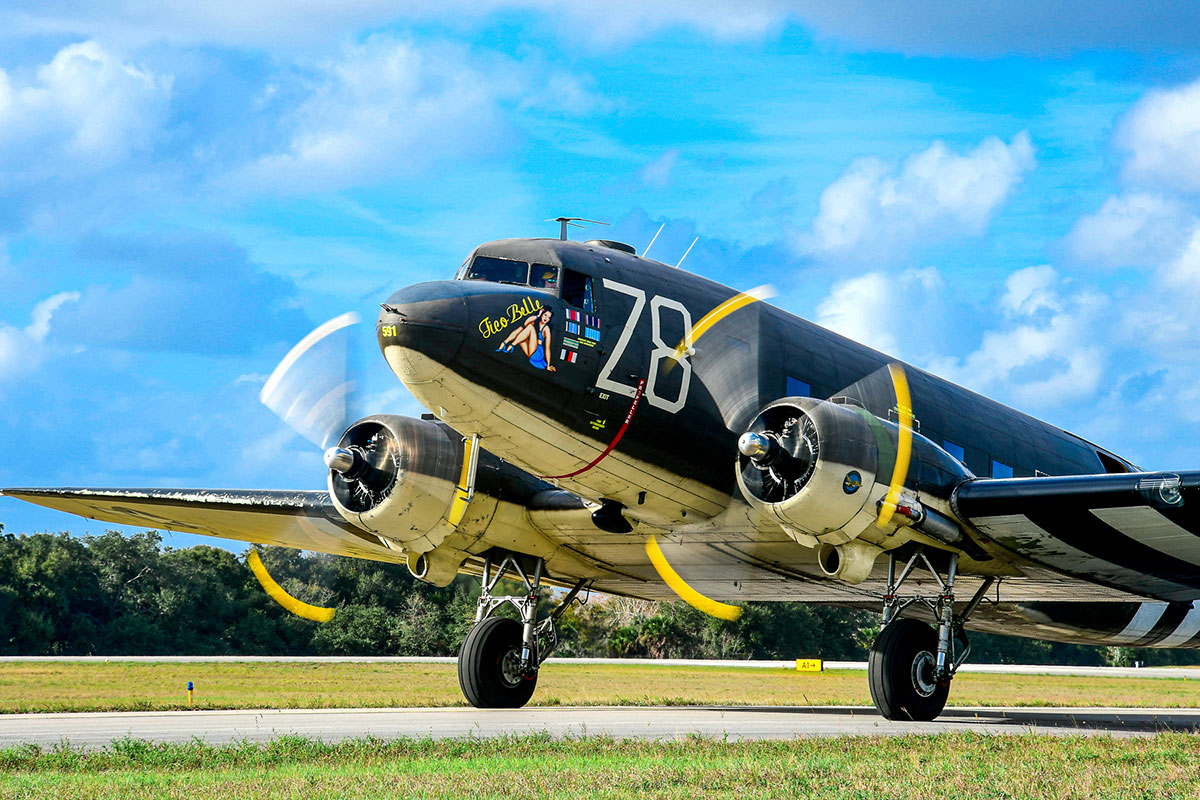 The venerable Tico Belle survived D-Day, Operation Market-Garden and the relief of Bastogne during the Battle of the Bulge. She is the undisputable star of the museum’s airshows. VALIANT AIR COMMAND WARBIRD MUSEUM PHOTOS

LOTS OF MILES, LOTS OF HISTORY
No plane better represents the appeal of warbirds than the venerable Tico Belle, flagship of the Valiant Air Command fleet. Unlike her muscular fighting siblings, the Belle is modest in her looks, but she is nevertheless living history.
At 0407 hours on June 6, 1944, she was among the C-47s that flew about 500 feet over Landing Zone O near the French village of Sainte-Mère-Église to drop brave men over Normandy and into the history of D-Day. No one in her crew was over 26 years old. 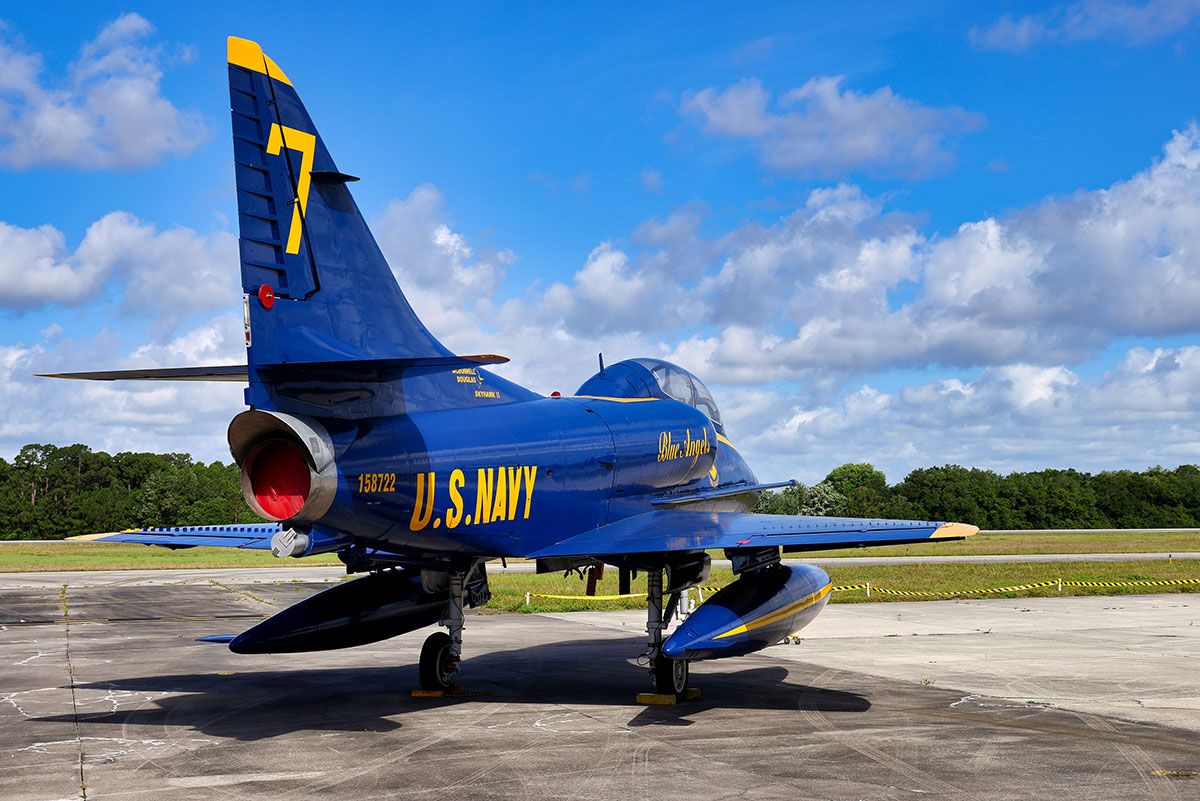 This Douglas A-4 Skyhawk was once part of the popular air shows presented by the U.S. Navy’s Blue Angels.

Luck was always on her side, always keeping flack from enemy troops away from her flanks. The ultimate survivor, the Belle also participated in Operation Dragoon in Southern France, Operation Market-Garden in Holland, the relief of Bastogne during the Battle of the Bulge in Belgium and Operation Varsity in Germany.

After the war, she remained on European duty during the Berlin Airlift before passing to the Royal Norwegian Air Force and the Royal Danish Air Force, where she served as transport for Danish royalty.

When the Danish Air Force decided to upgrade to newer planes, the warbird museum snapped up Belle and two of her sisters, with volunteers flying the planes across the Atlantic along the Great Circle Route. Again Belle proved a keeper.

“One became a donor plane for the Belle and the other was exchanged for another aircraft,” Boswell said. 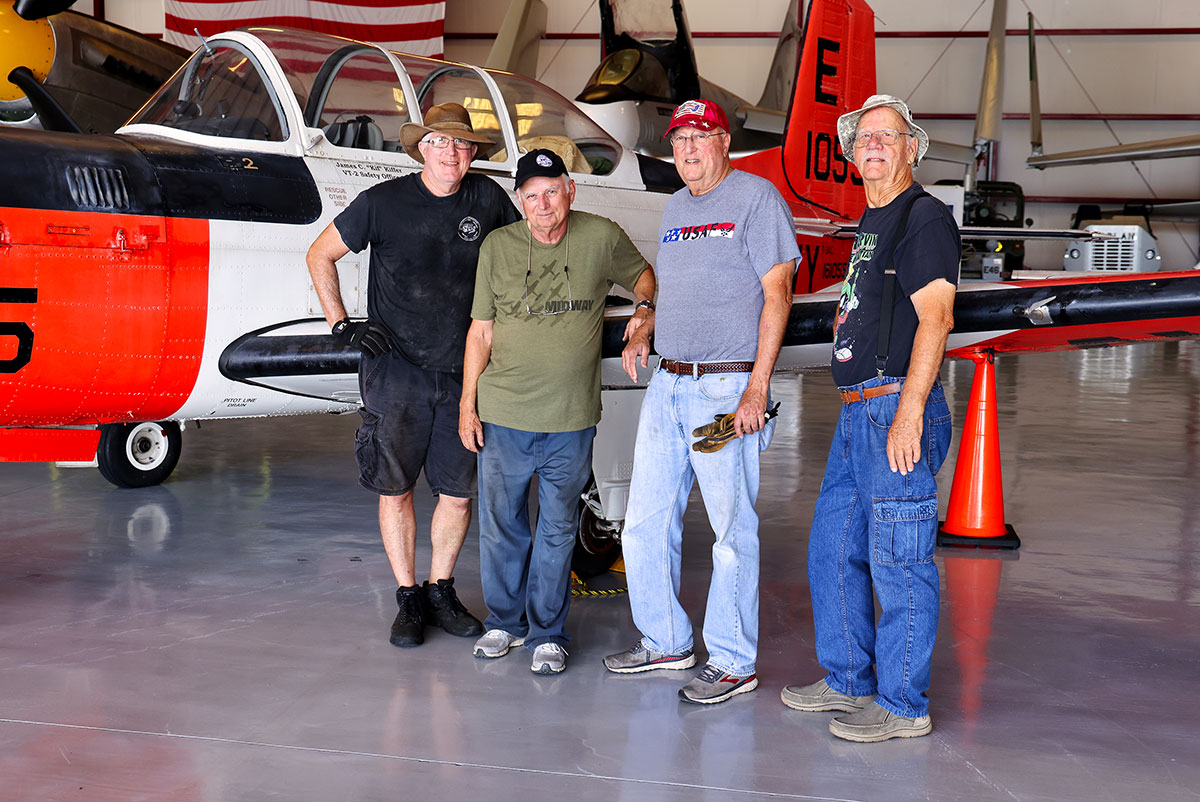 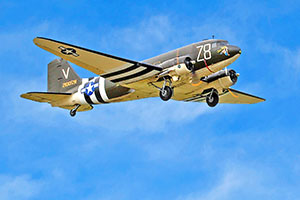 More than three quarters of a century after her history-making mission over Normandy, the Tico Belle continues to serve. When Category 5 Hurricane Dorian devastated the Bahamas in 2019, Belle was again on duty, delivering essential supplies to the people of the beleaguered islands.

She may not be fast, but she is dependable and determined. Whenever Tico Belle lumbers through takeoff or landing during the museum’s air shows, the audience grows quiet, awed by her unbreakable connection to the past.

“There is a lot to love about the warbirds,” Sietsma said.