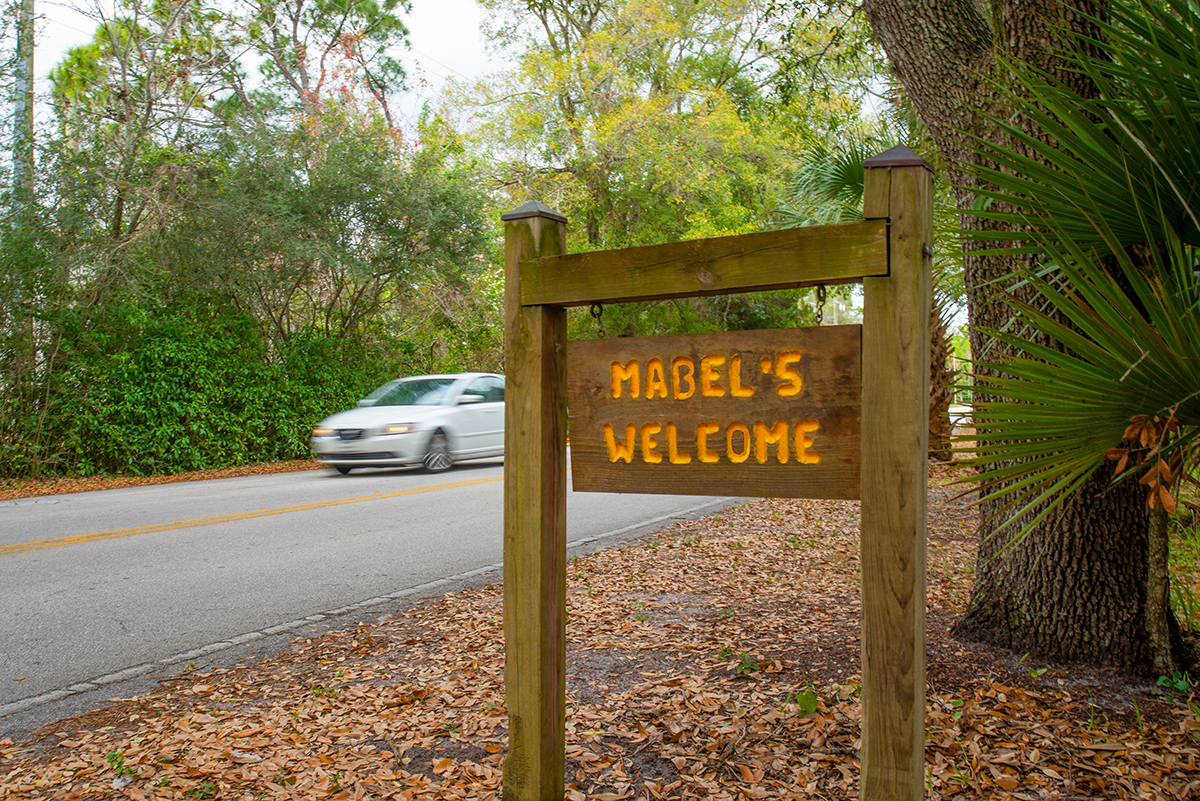 A simple wooden sign greets visitors to Melbourne Village. Villager Mabel Saunders so enjoyed bidding hello to neighbors that the sign was erected in her memory. ROB DOWNEY

There is neither pomp nor circumstance to the main entrance of Melbourne Village.

Only a simple wooden sign reveals that — sandwiched between a Target store and Haverty’s along Highway 192 — lies the gateway to a social experiment in homesteading. With typical understatement, the sign simply announces Mabel’s Welcome. 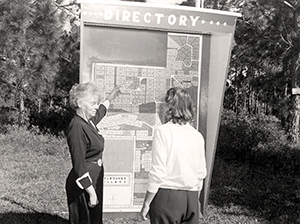 Dr. Elizabeth Nutting, left, one of Melbourne Village’s three Founding Mothers, shows the plans for the village to a newcomer. The plans included green space and room for recreational activities. CHARLES LEE BARRON

It takes detective work to discover that villager Mabel Saunders so enjoyed bidding hello to neighbors that a sign was erected to greet all visitors.

Comparing Melbourne Village to developments dotting Florida is like measuring a zebra against a horse. They may be both in the general family, but the former has a much more interesting background pattern than the latter.

To create tract communities that spring up hither and yon, today’s developers raze acreage, devise artificial lakes and plop down similar-looking structures. Melbourne Village, on the other hand, was originally intended as a community of productive homesteads where residents would clear their own acreage, build their own homes and run their own small businesses to keep food on the table, all while communing with Mother Nature.

“The Village is a study in democracy and in group and human relations,” wrote Richard Crepeau in Melbourne Village: The First Twenty-Five Years 1946-1971.

The community has always cherished its individualism.

“There is nothing like it,” said professional photographer Rob Downey, who moved to the village in 1989 and served as volunteer mayor of the town of 700-plus residents. 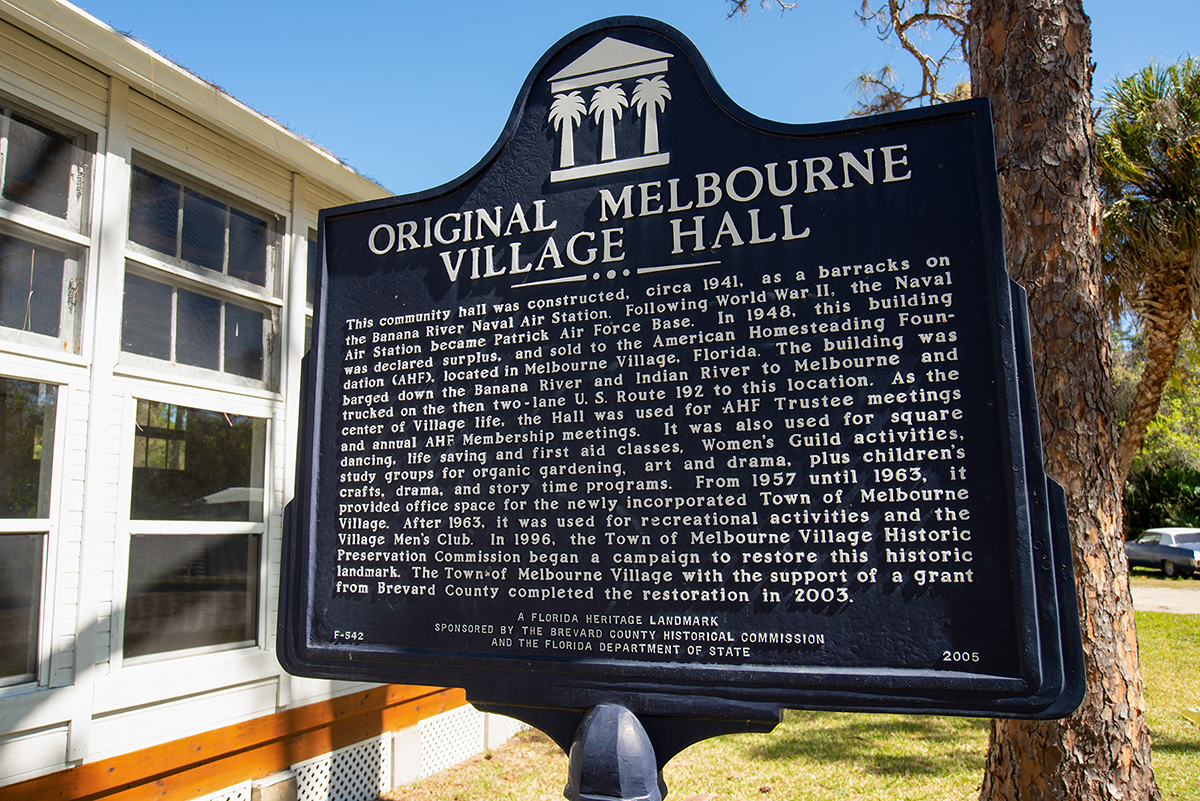 A historical marker at the village hall offers visitors a glimpse of its past. ROB DOWNEY

NORTHERN BEGINNINGS
The story of the village begins in an unexpected location: Dayton, Ohio. The reason for its existence was based on the very American principle of refuge through community.

Dayton could not shake off the Great Depression. Trying to help the poor was the YWCA, which employed Dr. Elizabeth Nutting and Margaret Hutchinson while Virginia Wood was the organization’s volunteer president. The three women banded together to develop The Dayton Plan, a self-help plan that included garden allotments, clothing and shoe factories and a bakery.

The trio wanted to expand from helping the bottom of the economic scale to address the problems of the middle class unemployed. Hutchinson had attended a seminar led by agrarian theorist Ralph Borsodi and was excited by his ideas on self-sustaining exurban communities. A prototype community, Liberty Acres,ro se up, only to quickly crash.

World War II put the dream side, but Hutchinson, Nutting and Wood did not let it die, particularly after Nutting met Dr. Norman Lennington, a Borsodi disciple who also sold land in Melbourne.

“Basically, Lennington was a land promoter who used the back-to-the-land movement as his hunting ground,” wrote Downey’s former neighbor, the late Georgiana Greene Kjerulff in her book, Troubled Paradise. 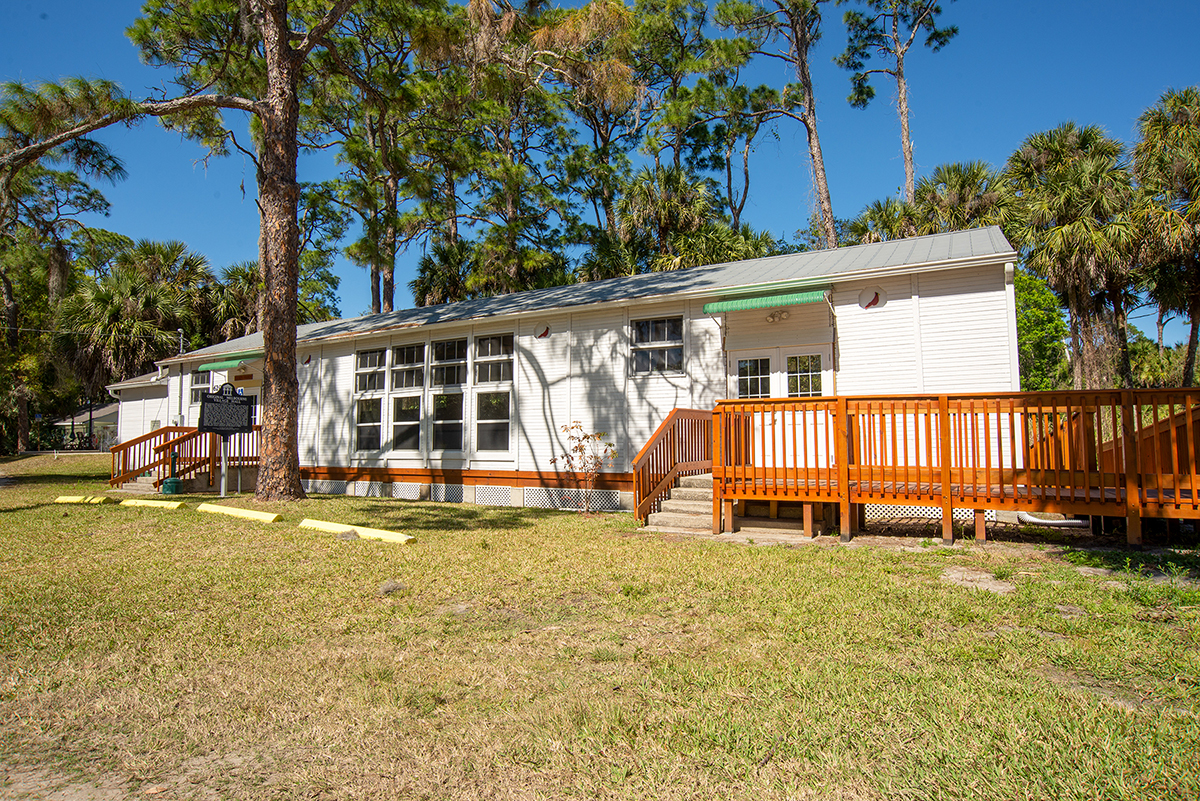 The community center remains the hub of village activities.

OVERPAID FOR LAND
Lennington found them land thriving with oaks and pines and palms and pastures. The women knew they were home and purchased 80 acres at $75 an acre.

“Later, they discovered that the going rate for the land was $30 an acre,” added Greene Kjerulff. 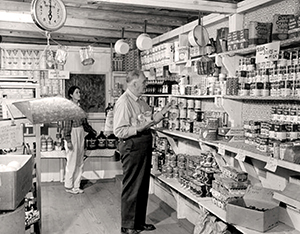 The not-for-profit American Homesteading Foundation, incorporated in Ohio in 1946, sold the land to settlers, many of whom built their own nests and engaged in small — and sometimes eclectic — businesses such as chinchilla farming. A community store, run on the honor system, sold some of the products.

To circumvent the lack of post-war building materials, some residents opted to purchase prefab barracks from the Banana River Naval Air Station.

“They were brought down the river on barges and trucks took them up 192,” Downey said.

A couple of the barracks, one a private residence the other headquarters for the American Homesteading Foundation, remain.

Back then, having enough money to purchase a lot in Melbourne Village did not assure you that you would live there, for the foundation did not want speculators.

“You had to be approved to move in,” Downey explained. 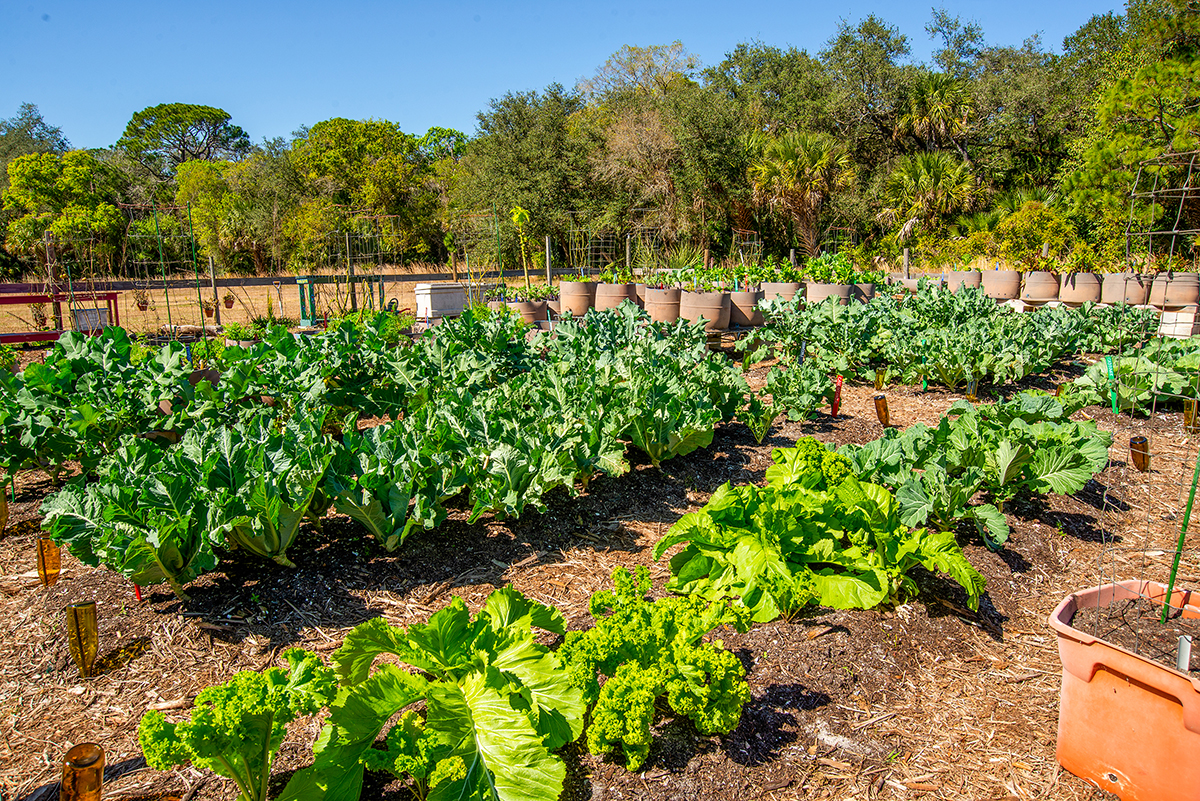 Produce from the community garden is shared among the village residents.

FOUNDATION A FAVORITE
Although the AHF has since evolved into more of a homeowners association, it remains beloved by the villagers, who appreciate the foundation’s maintenance of 52 acres of park land, the community pool and the rec hall, and its orchestration of events such as Easter egg hunts, Halloween parties and Christmas dinners.

Debbie Seiler, a Realtor associate with ITG Realty in West Melbourne, fell under the spell of Melbourne Village 19 years ago. Seiler purchased property she thought she would fix for other relatives until she discovered how different the village was from her former home in Melbourne Beach.

“We were struck by how quiet, convenient and peaceful it was,” said Seiler, who runs a special website about life in Melbourne Village.

“When a house goes on the market, it is gone in a day with multiple offers,” Seiler said.

Land values have risen considerably since the village’s Founding Mothers purchased at $75 an acre. One of the few remaining acre lots recently fetched $267,000.

“Land is definitely on the high end,” Seiler said. 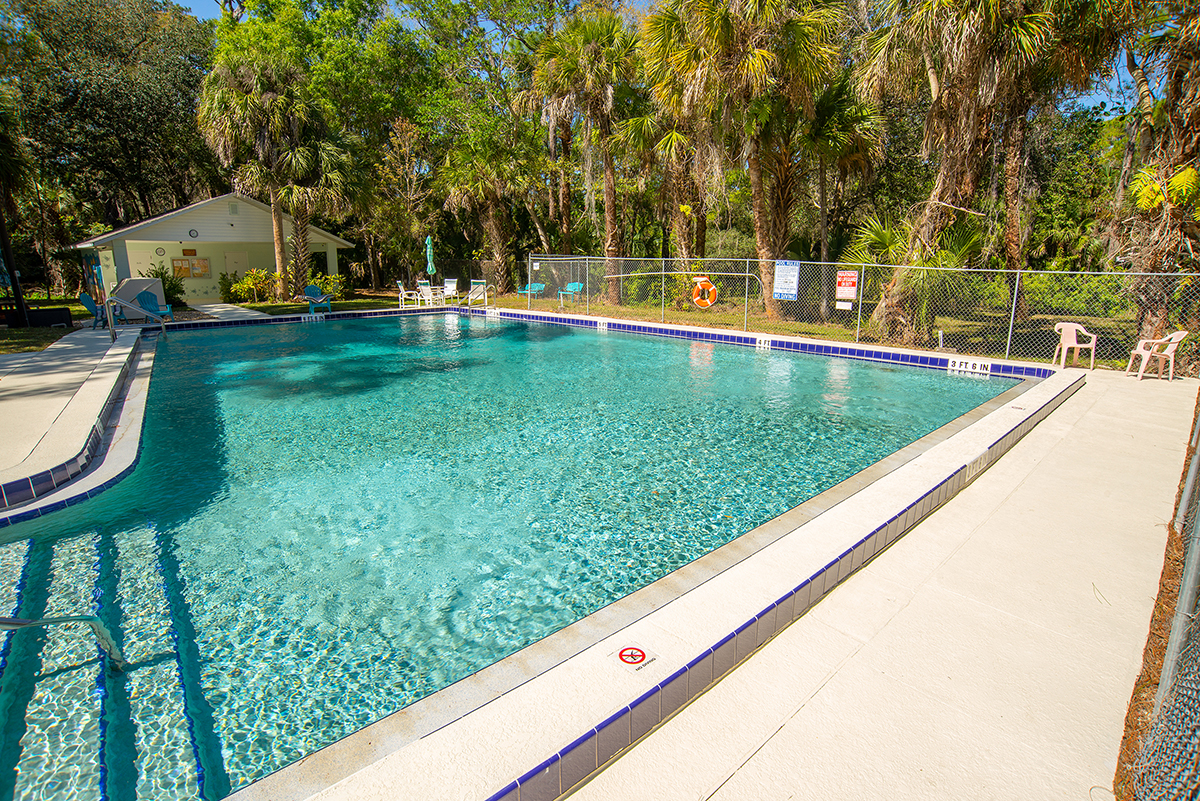 The American Homesteading Foundation maintains Melbourne Village’s 52 acres of park land and its amenities, including the community pool.

HOME FOREVER
People who grow up in the village tend to stay in the village. Seiler notes that at least 30 families have multiple generations scattered around the community. Brothers live next door to each other; grandparents are down the street from grandchildren. Couples get married under the oaks of Deer Head Hammock, where the ashes of some departed villagers rest. 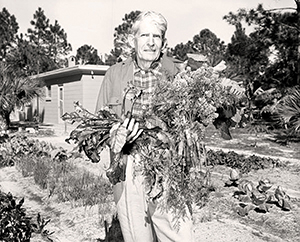 Villager Elmer Cartledge shows off prized garden produce in this circa 1950s photo.

Dave Jones came to the village as a child. Sixty-three years later, he is still there, as is his sister, who lives a few roads down.

“It as a great place to grow up in,” said Jones, a town commissioner.

His dad, who bought two adjoining lots, built the family home himself. When Jones had a family, he built on the adjoining lot.

“My three daughters grew up there,” he said.

The town, incorporated in 1957 to halt possible annexation by Melbourne or West Melbourne, has successfully maintained its green charms.

“Melbourne Village fights over its differences and to retain those differences,” wrote Crepeau. 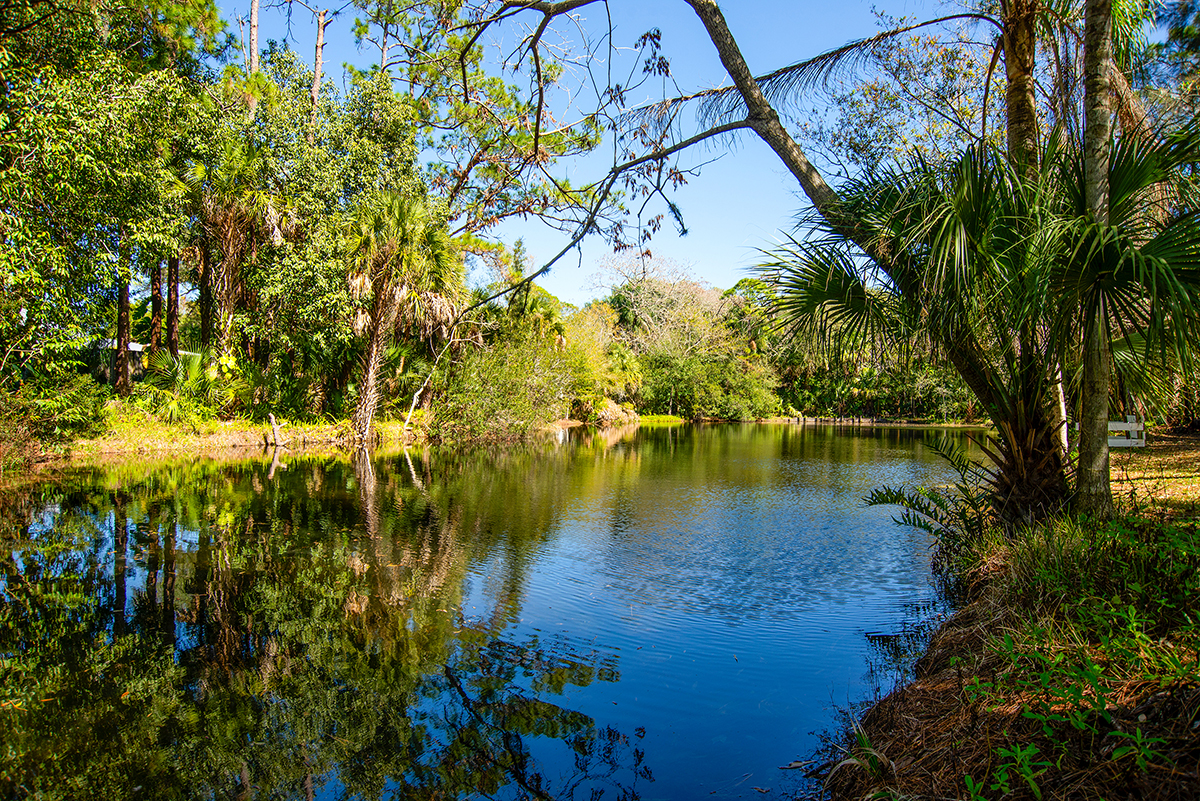 Old Florida is alive and well in the verdant nooks and crannies of Melbourne Village.

SAFE AND SOUND
A police department, unusual for a town so small, makes sure everyone is safe and that traffic never goes over the speed limit.

“If you go away, the police will do house checks every day,” Downey said.

“People leave their keys with them in case the water heater breaks.”

Responsible growth ordinances restrict any possible McMansions from going up.

“We didn’t want a giant house crammed in a third of an acre,” Downey said.

At least 30 percent of most lots remain adorned with a canopy of live oaks and southern pines.

A community garden harkens back to the village’s self-sustaining beginnings.

“Everyone contributes to its care and on Saturdays anything that is ready is shared,” Seiler said.

It is not surprising property sells so quickly, for Melbourne Village’s commitment to all things green, coupled with a deep sense of community, make an appealing combination.

“I lived in another place for 20 years and didn’t know my next-door neighbor,” Seiler said.

“Here, your neighbors become your friends.”

As traffic and sprawl swirl around it, Melbourne Village remains content to bask in its glorious scenery and delighted to retain its small-town flavor.

“My dad always said that nothing ever changes in Melbourne Village,” Jones said.