If you become still and tune in, you might notice a healing energy swirling around the Space Coast. Have you felt it?

Could it be the negative ions emanating from the Atlantic’s ocean breezes? The warm and welcoming Florida sunshine? Is it Mother Nature’s nurturing environs allowing us to coexist with sea turtles, manatees and an abundance of birds? Might it be the lingering energy from the Ais Indians who used to hunt, gather and fish along our barrier island? Or is it the protection of the lost city of Atlantis, which may or may not be sunken somewhere off our local coastline?

No one can say for sure, but I have my own theory about part of it, at least, and it involves one soft-spoken and unassuming small business owner who deeply cares about people and encourages those with pure hearts to develop and share their gifts.

Cheri Hart owns Aquarian Dreams Conscious Lifestyle Store & Yoga Center, located in a curious lavender building on the west side of A1A in Indialantic. The Center houses a natural clothing, gifts and bookstore, along with practitioners of various healing arts, group classes and events. It is a cozy family affair with son Jamin (who offers acupuncture and Chinese medicine), son Teren, who provides massage therapy and teaches yoga and daughter Shana, who helps run the store.

Many budding empaths, yogis and seekers have been inspired by Hart, who got her start in Washington, DC, in the early 80’s with a $2,000 loan for a natural fiber children’s clothing mail-order business. Cheri grew that small business into a $1.5 million business with 250,000 customers in a span of four years.

After she sold the shop, Cheri moved to Florida and opened the first Aquarian Dreams in 1986 in Downtown Melbourne. Quiet and humble, you might be surprised to learn this hard-working entrepreneur is a clairvoyant, medical intuitive and master healer who has taught students to develop their intuitive powers for over 30 years. The Center is also home to the lightworker community at large here on the Space Coast.

According to Hart, a lightworker is one who seeks to bring light and love to everyone as best as possible. Anyone can be a lightworker; she has trained many. Before the pandemic, Hart hosted weekly Community Lightworker Circles where participants joined hands and envisioned white light spreading peace and healing to all who need it. She hopes to resume these Sunday sessions after social distancing recommendations have ended.

Last year, Shannon Davis founded the Chacana Spiritual Center in Melbourne. As a hospice nurse, Davis could sense people leaving their bodies as they passed and decided to help people make peace with death. In the early 2000s, she studied white light healing with Hart and reiki with another teacher at Aquarian Dreams. Davis would eventually teach her own brand of “Goddess Energy” healing there, as well as classes in Munay Ki (Love in Action) from her training in the lineage of Peruvian Incan Q’ero shamans.

When Davis opened her own spiritual center in 2020, Cheri was there to lend a hand, putting action behind her beliefs that cooperative business practices and a community filled with conscious living businesses can help make the world a better place. Cheri says she trusts Shannon so much that she sent her granddaughter to study with her at the Chacana, where Davis trains shamans to bring order to chaos, harmony to disharmony, and help people take back their power.

Explains Davis, “We are white light healers who also work in the shadows to release traumas and emotional wounds.” Davis sees Brevard as a spiritual hub, attracting seekers of healing from across the state.

Dena Hall has a private Ashtanga yoga and personal training practice in Indian Harbour Beach, helping clients transform their lives. In 2011, she came to Aquarium Dreams after the death of her father and loss of her daughter’s father. Hall wanted to teach yoga in a space where she could chant, express her spirituality and escape the unhealthy patterns and eating disorders often found at gyms.

Cheri “took my hand and took me in without judgment. She was like a mother figure to me at that time,” Dena said. She hosted yoga classes for several years at Aquarian Dreams and said that before yoga, she was in pain mentally, spiritually and physically. Once she started devoting herself to yoga, everything got better. “I was able to take the reins of my own life,” she said.

In 2014, Anthony Profeta moved from New Jersey to Florida to be near his mother after his father died. Anthony dropped out of medical school after realizing it made more sense to address the stress that contributes to 90% of illness than to treat disease symptoms. Having studied and informally taught meditation for a dozen years, Profeta was seeking out spiritual places when he learned of Aquarian Dreams.

Cheri immediately connected with Anthony, explaining that she saw a beautiful energy around him and knew him to be “true.” She invited him to teach at Aquarian Dreams, where he now holds regularly soldout sound bath healings and meditation trainings. Profeta travels the U.S. as a mindfulness expert and singing bowl specialist, noting that Brevard is a spiritual haven with an especially high number of yoga studios, ashrams and spiritual centers per square mile. He does not know why.

Perhaps world-renown astrologer and hypnotist Bruce Orion lands closest to the answer. After 25 years in Sedona, Arizona, which is known for its energy vortexes, Bruce said he was considering a move to California. He changed his mind after Hart arranged for him to host astrology classes in 2009.

Ashesatonthe beach at Nance Park one afternoon during his visit, Bruce said he received three signs. First, three different people approached him and said, “Isn’t it great living in paradise?” (He points out that in the ten years he has lived here since, no one has asked this of him.) Second, he observed dolphins swimming in the ocean. Third, as he walked back from the beach, he noticed the sign for Bizzaro’s Famous New York Pizza. Originally from New York, some of Bruce’s best friends growing up were named Bizarro.

That was it. Indialantic would be his new home. Now Hart’s life partner, Bruce, is convinced the energy here is especially nurturing. “I’ll tell you what, the talent offered here is equal to anything found in Sedona,” he said. “I have met a lot of psychics in my life, and Cheri is the best I’ve ever met.”

I do not know if Brevard is home to one or more energy vortexes like those found in Sedona. I do believe in the ripple effect created by one small businesswoman — a super spreader of lovingkindness and healing light in our community. 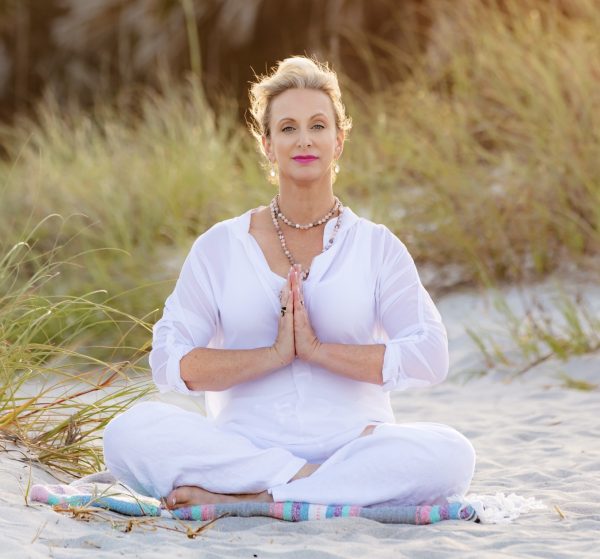