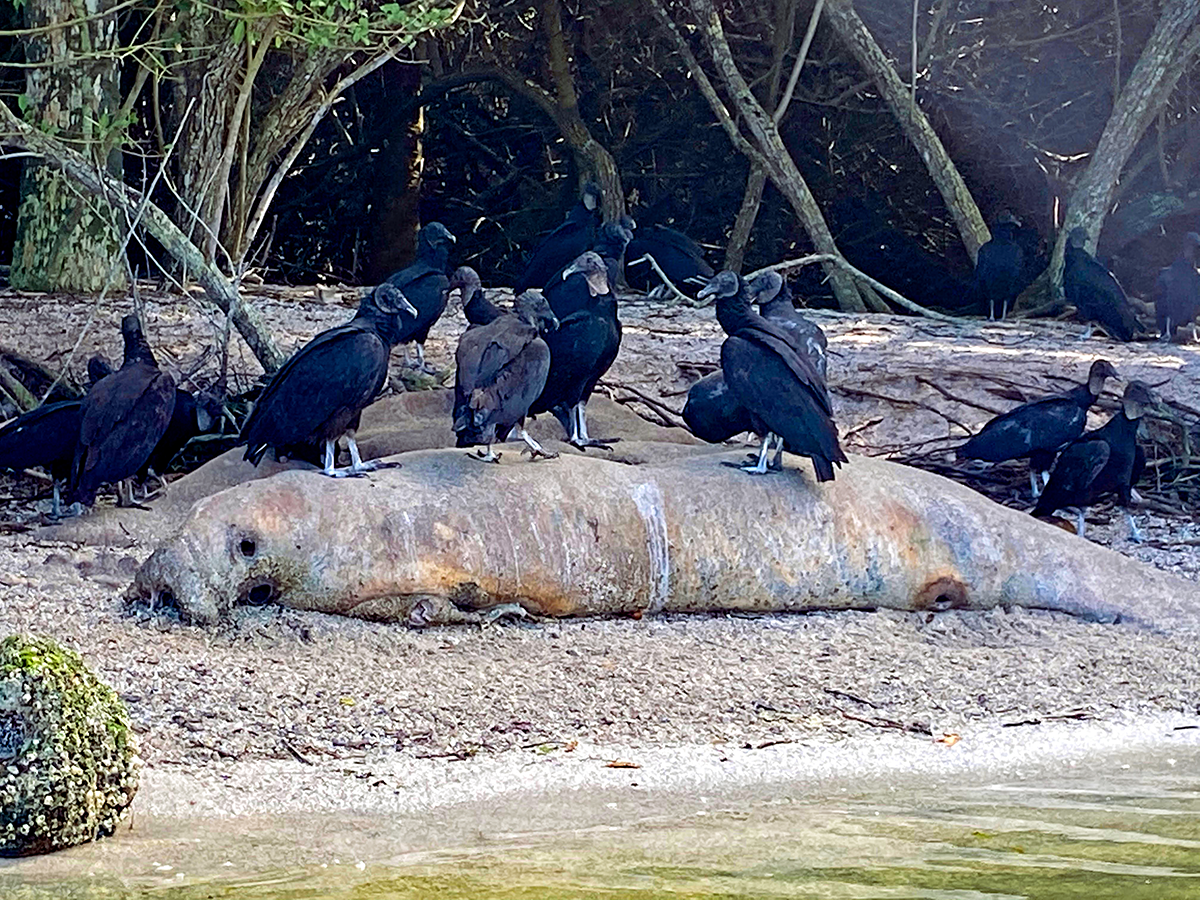 Turkey buzzards scavenge carcasses of dead manatees in the Indian River Lagoon. Many of them are starving to death because of the lack of seagrass. PHIL STASIK

This year has been a disastrous one so far for manatees in the Indian River Lagoon. Scientists and experts are saying the coming winter could be as bad or worse. And there are no quick or easy solutions to end the deaths.

Brevard County has experienced the most deaths with 316 manatee dying in the first seven months. Martin County has reported 35 deaths; Indian River County, 23; and St. Lucie County, 14. This means nearly 400 have died in just four counties. Statewide, the death toll was 890 between January and July. 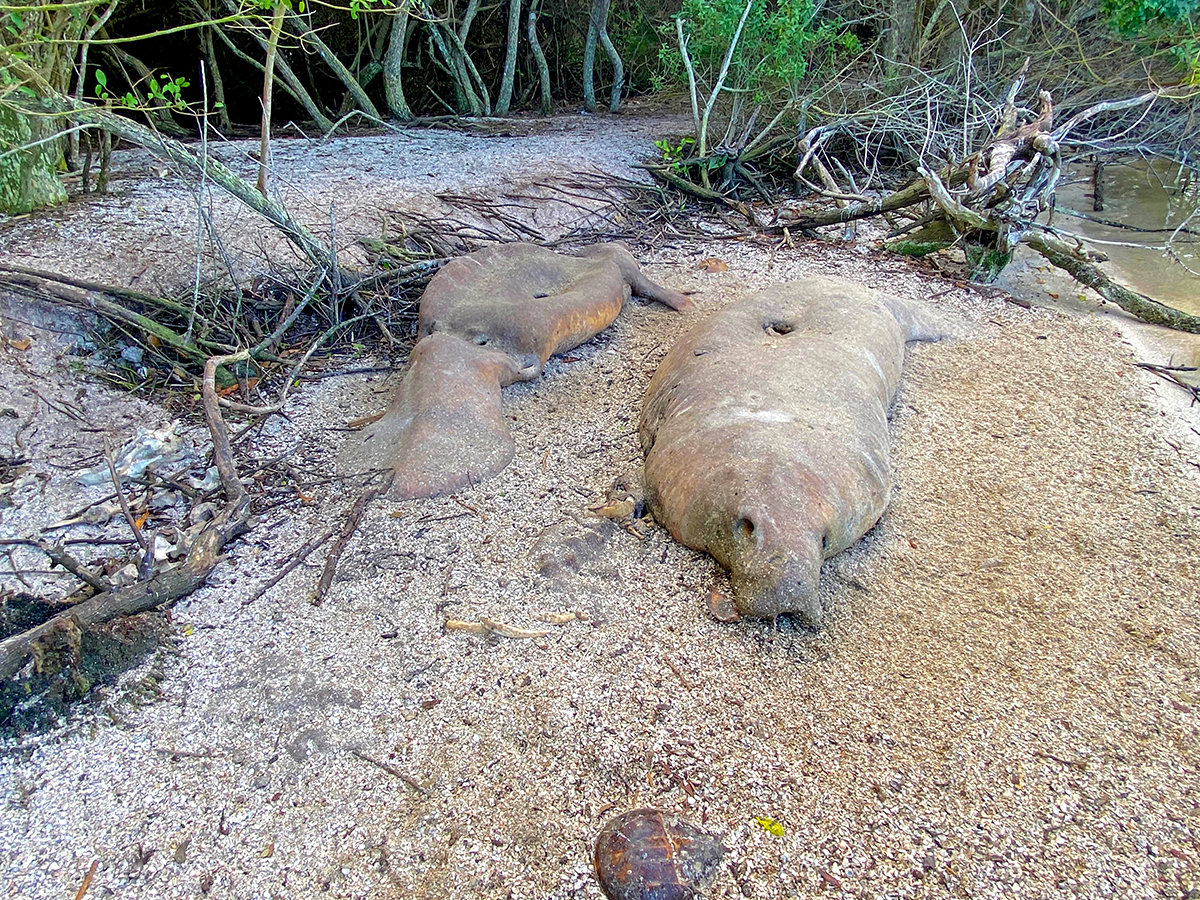 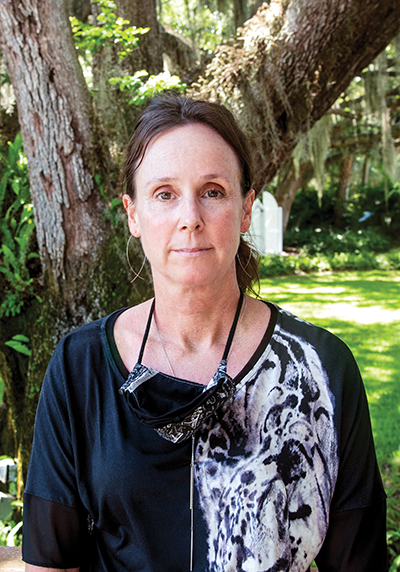 Chief biologist Martine deWit of the Florida Fish and Wildlife Conservation Commission says the loss of seagrass in the lagoon is unprecedented, leading to manatee deaths. FRED MAYS

“Unprecedented,” says Martine deWit, the chief biologist for the Florida Fish and Wildlife Conservation Commission. “There were so many deaths we couldn’t do necropsies on all of them.”

According to deWit, starvation was the overwhelming cause of death on those manatees she was able to necropsy. The cause is the loss of seagrass in the lagoon, their primary food source. While it’s worse in Brevard County, it has happened all along the lagoon. Mike Conner, Indian Riverkeeper, reports severe seagrass die off in Martin and St. Lucie counties.

“Where once you had healthy seagrass, now there is just white sand on the bottom,” he said.

It’s not just manatees being affected. Conner says there has been an alarming decline in populations of game fish in the southern lagoon. The whole food chain is being threatened.

The primary cause of seagrass loss is pollution and algae blooms. The sunlight can’t get to the bottom of the lagoon and the grass dies. There is no quick solution. The Marine Resource Council gave the lagoon in Brevard County an F in its water quality report card this year. 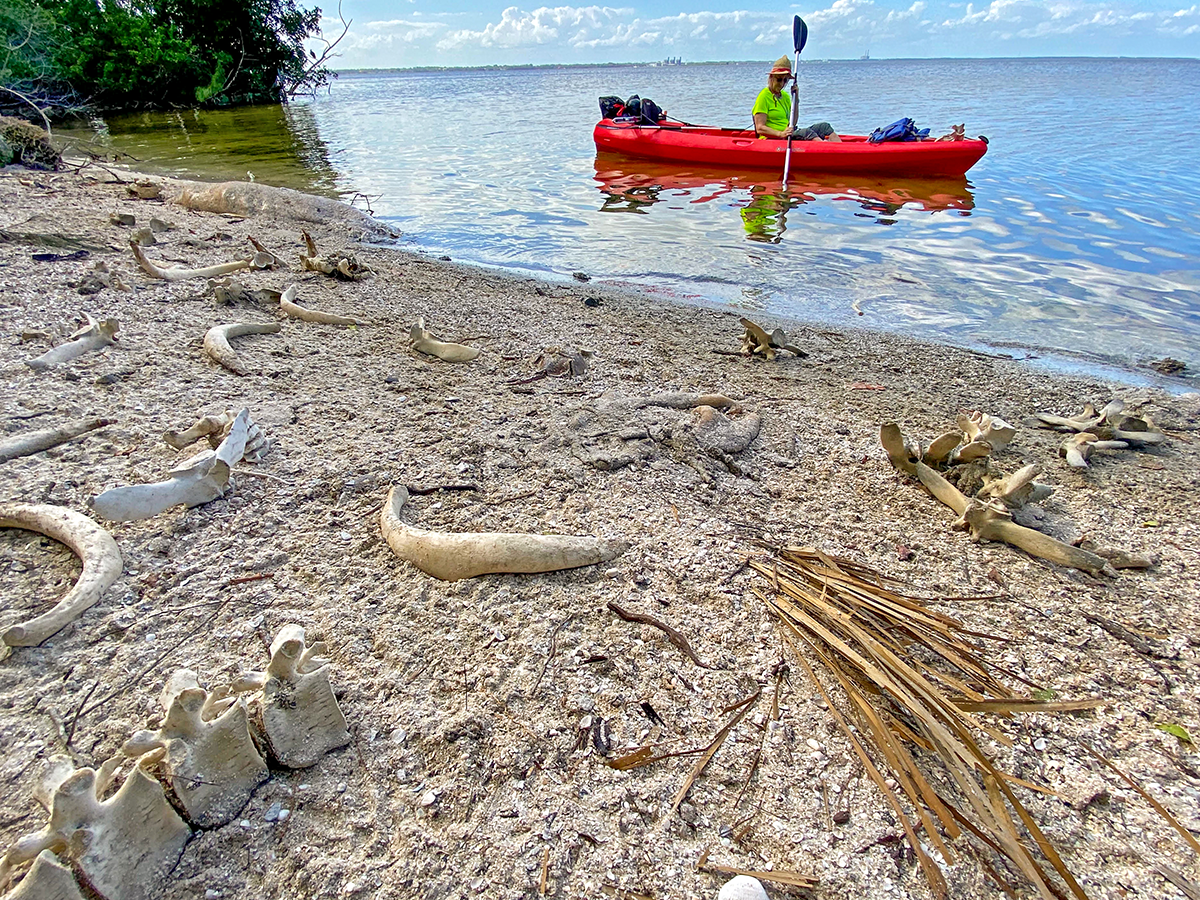 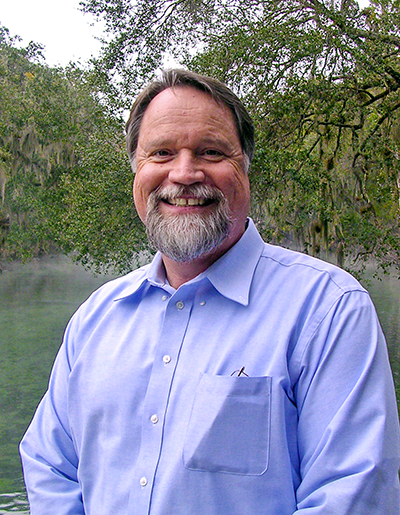 Patrick Rose, executive director of Save The Manatee Club, says more food sources need to be found. SAVE THE MANATEE CLUB

The solutions aren’t easy or cheap and progress will be slow, causing concern for the coming winter.

“We need to think about supplemental food sources,” says Patrick Rose, executive director of the Save The Manatee Club.

How that would work is problematic. “We haven’t worked that out yet,” Rose says.

It also runs afoul of state and federal regulations. Manatees are a threatened species and it is illegal for people to feed them.

Rose says there will need to be more rescues, where stricken manatees are captured and taken to places like the Sea World manatee rehab center, where they are nursed back to health. But there are only a few manatee rescue centers in the state and most are at capacity.

Attempts are being made to restore the lagoon’s water quality, but those are long-term solutions. Brevard County has a special sales tax to generate money for lagoon cleanup. That tax will generate more than $400 million over 10 years. Duane de Freese, executive director at the Indian River Lagoon National Estuary Program, says it will really take billions of dollars to do the work right. Brevard’s problems are caused by rapid population growth, causing more storm water runoff, septic systems leaks and fertilizer runoff. 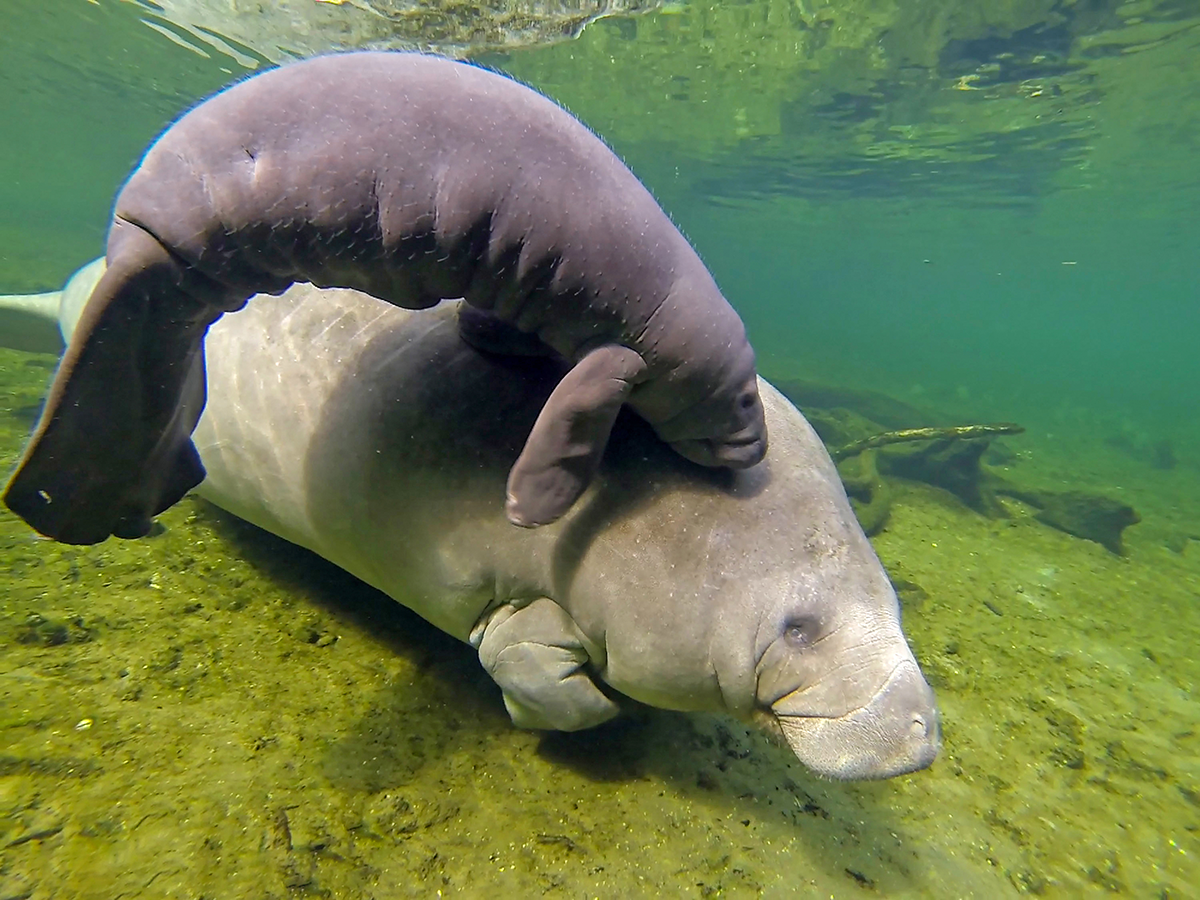 A healthy manatee and calf at Blue Springs State Park, one of the largest winter gathering sites for manatees in Florida, thrive in the constant 72-degree spring water in the colder winter months. SAVE THE MANATEE CLUB

In the southern lagoon, the water quality is impacted by discharges from Lake Okeechobee. The State of Florida, the Army Corps of Engineers and the South Florida Water Management District have $2 billion to clean up the lake and the discharge, but they’ve been at it for four years without significant water quality improvement. 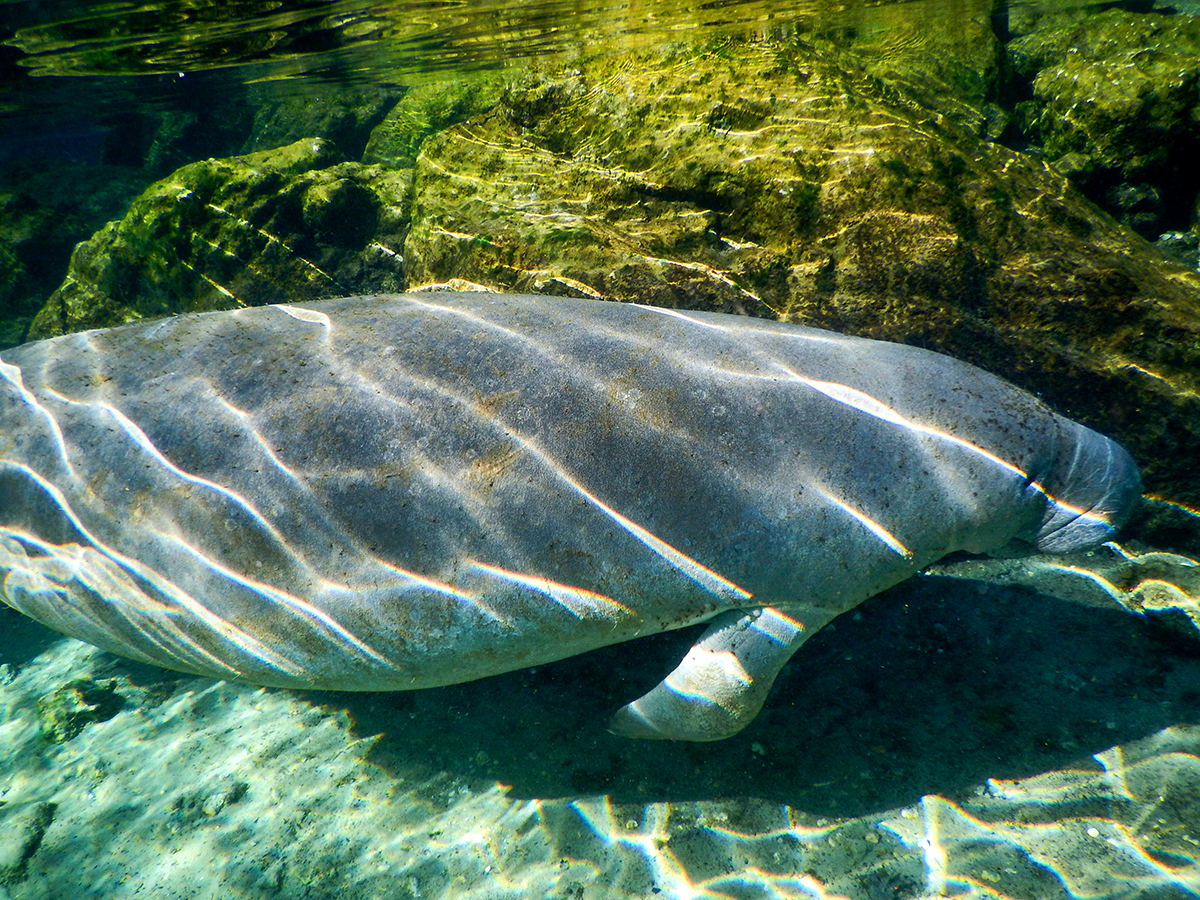 Manatees also like to gather at Three Sisters Springs, which is part of the Crystal River system that originates in Kings Bay, a first-magnitude spring flowing into the Gulf of Mexico. KATHY JONES

There have been large manatee die-offs before, but not from starvation. In 2010, 480 manatees died in the lagoon because of an especially cold winter. This time around, the cause of the manatee’s plight is much more complex and long-term. Scientists and experts are bracing for continuing bad news. 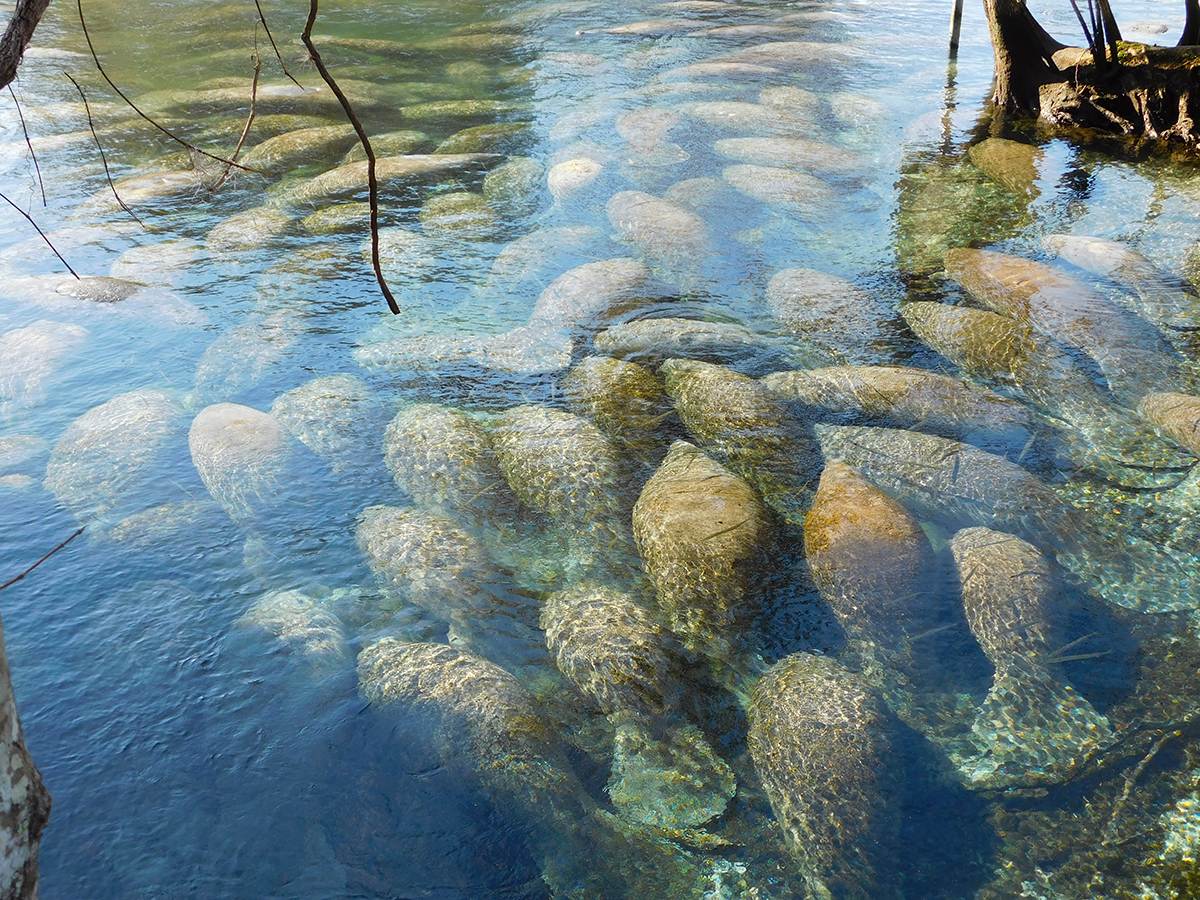 Three conservation groups, including the Save The Manatee Club, have declared their intention to sue the U.S. Fish and Wildlife Service over the massive die off of manatees in Florida waters this year.

Save The Manatee Club joins Defenders of Wildlife and the Center for Biological Diversity in the suit, which claims FWS failed to update designated critical habitat areas for the manatees, as required by federal law.

According to Patrick Rose, club executive director, they have been pushing the feds since 2008 to upgrade the regulations. The ultimate goal of the lawsuit is to get FWS to push the Environmental Protection Agency to require higher water quality standards.

“FWS has to hold EPA’s feet to the fire,” Rose says.

The EPA needs to stop issuing permits that degrade water quality in the Indian River Lagoon estuary, he says. “That isn’t going to happen if we don’t keep pressing hard.”

Manatees are classified as a threatened species under both federal and state law. Several Florida members of congress are seeking to upgrade that status to endangered, which would afford manatees even more protection.

More than 900 manatees have died in Florida waters so far in 2021, most of them in the waters of the Indian River Lagoon.