On with the show 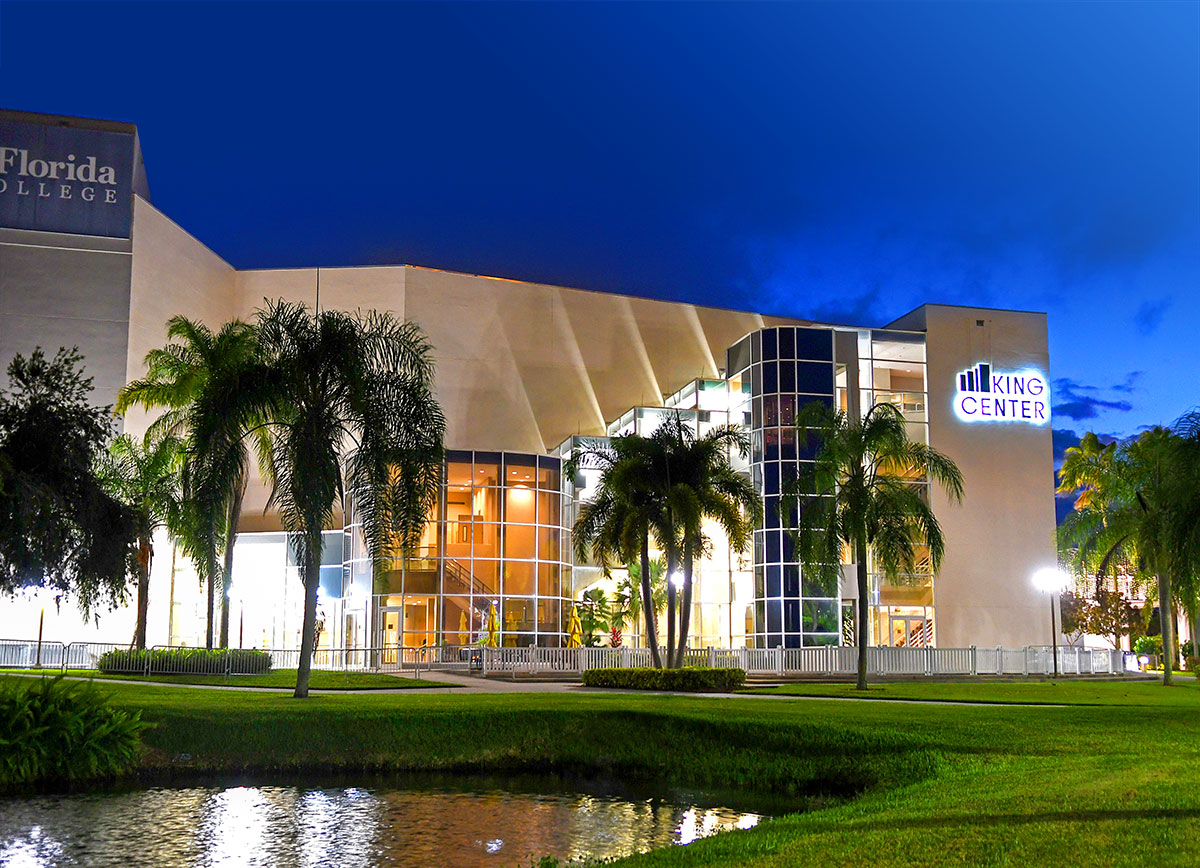 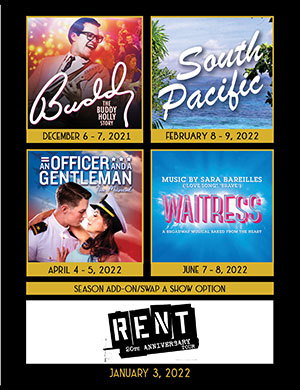 A robust schedule of Broadway touring shows is a sure sign things are back to normal at the King Center.

As the story of Buddy Holly unfolded on its main stage in early December, the Maxwell C. King Center for the Performing Arts was putting in the last piece of the normalcy puzzle.

It had been a rough 18 months for Brevard’s premier performing arts venue, but the return of Broadway touring companies such as American Theatre Guild’s Buddy: The Buddy Holly Story heralded a brighter tomorrow. Coincidentally, it was a Broadway show, Singin’ in the Rain, that opened the center in April 1988.

ASM Global, the Los Angeles-based venue and event management company that took over the center in early 2020, could not have had worse timing. Almost immediately, it faced pandemic-induced closings, limited capacity re-opening, high-octane cleaning protocols and concert cancellations or postponements because of COVID-19 spikes, all while the building was undergoing major renovations.

Until COVID-19 turned the world upside down, the King Center had hosted more than 100 annual events that attracted more than 100,000 visitors eager to see performers such as Aretha Franklin, Billy Joel, Dolly Parton, Jerry Seinfeld and John Legend. 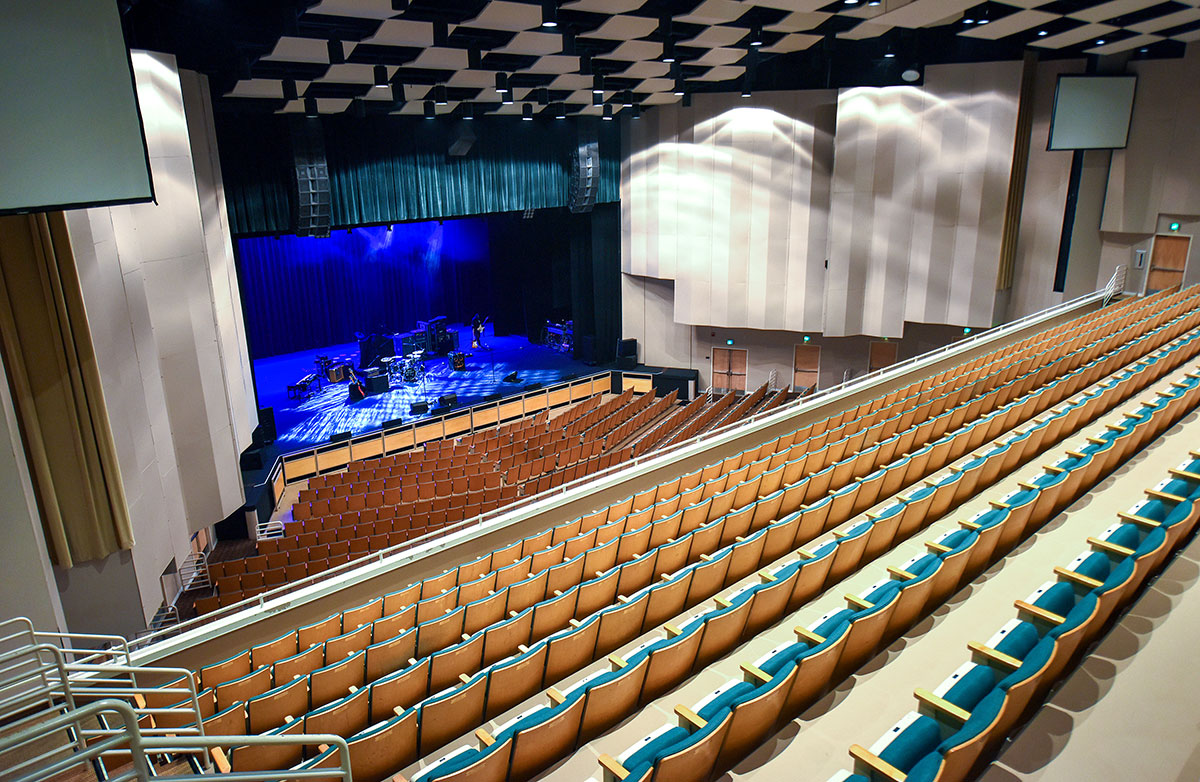 With 2,016 seats, the center is in the middle of the sweet spot for ASM Global, which manages an extensive collection of theaters around the world.

STAGE WENT DARK
For long months, there were no audiences and no shows. The once robust youth program, which introduced thousands of students in Brevard to the magic of live theater, shuttered. The program, renamed the Titan Youth Theatre, has returned with programs to connect and support co-curricular learning and serve under-resourced students in Title I schools, as wells as assist groups that serve youth and young adults.

“As we reimagined our next steps, we worked behind the scenes with artists and their management teams and have selected programs that will educate, enrich and offer enjoyment,” said Karen Wilson, who has led the program for more than two decades.

On the schedule for next year are a range of programs that include The New Shanghai Circus, the U.S. Coast Guard Band, Trashaganza by Bash the Trash and South Pacific.

The long journey back to normalcy began when promoters such as Roland Guilarte of Brevard Music Group slowly brought concerts back. Guilarte, a pivotal figure in Central Florida’s jazz scene, has forged a decades-long association with the King Center.

“Having a 28-year relationship with our local performing arts center is key to our success,” Guilarte said. “Although we present concerts at other area venues, the King Center is an A quality venue and has been so for 33 years. We are pleased with how ASM Global Management has started to move things forward.” 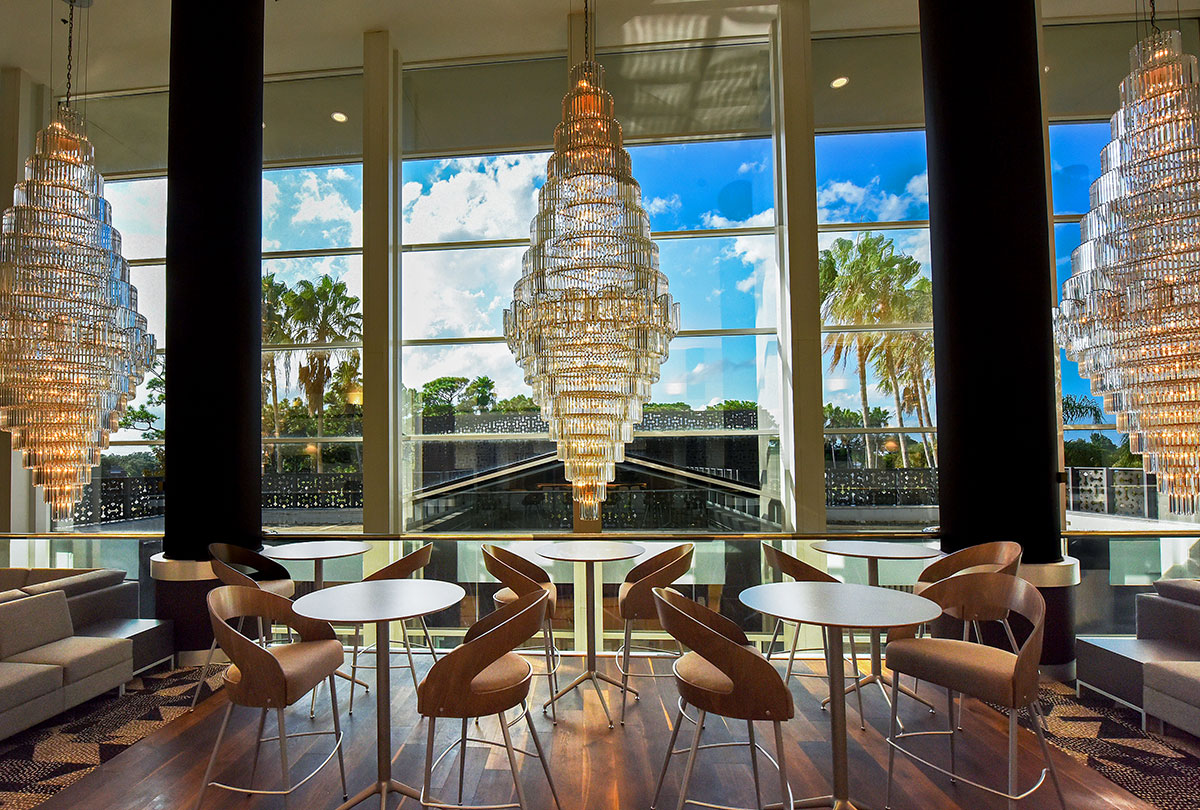 EXTENSIVE MAKEOVER
For the center, leaving pandemic woes behind included the November reveal of its newly redesigned and upgraded members-only Crown Club, a haven for patrons.

The makeover included a new bar and furniture, impressive lighting fixtures, carpeting and unique memorabilia and art. All in all, the $4 million project was the largest in the center’s history.

The Crown Club came on the heels of additional upgrades that featured a complete lobby and bar renovation, an expanded main entrance, art installations and a cutting-edge HVAC system. 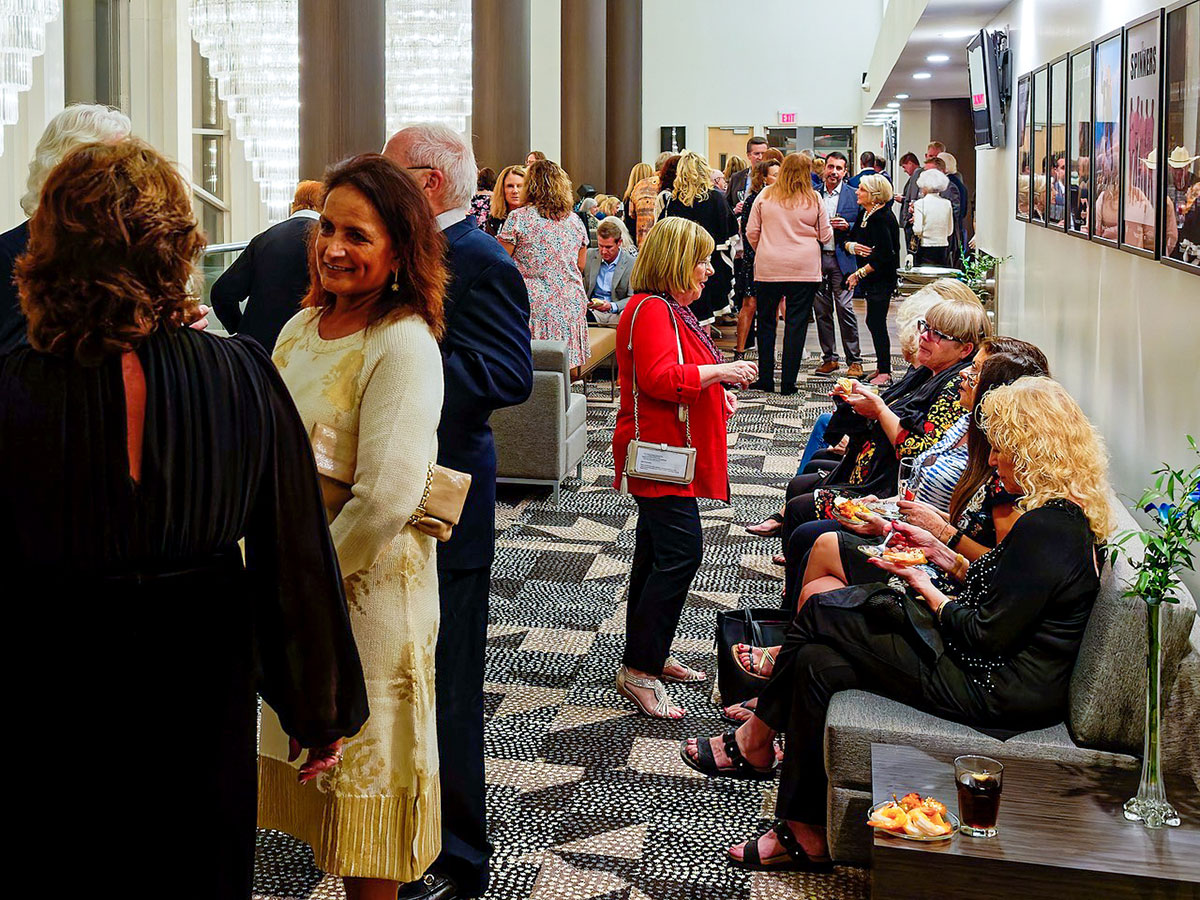 The $4 million remodeling project at the King Center included improvements to the Crown Club, a place where Crown Club members can gather to socialize during intermissions and prior to shows. A new bar, updated furnishings and impressive light fixtures were part of the remodel.

As performing venues go, the center is among the perfect ones for ASM Global, which manages theaters ranging in size from 500 to 5,000 seats.

“With 2,016 seats, it’s in the middle of the sweet spot,” said Bob Papke, general manager of the King Center and ASM’s vice president of theaters.

Papke, who lives in Brevard, also oversees operations of theaters as far away as Sydney, Australia, and Manchester, England. 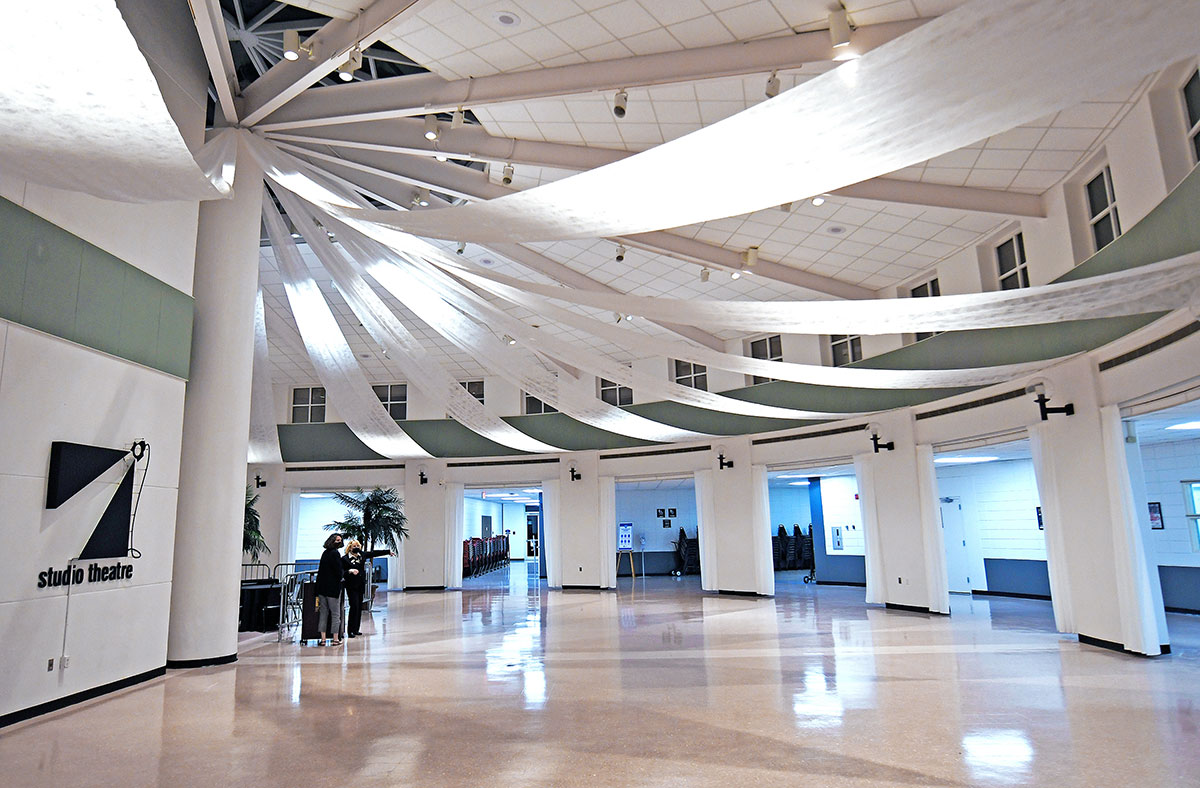 SLOW RECOVERY
As the pandemic waned, the center tentatively reopened with strict safety protocols that included a 25 percent capacity and shows with only one or a couple of performers onstage. It slowly upped capacity to 50 percent and then 100 percent, but audiences didn’t initially rush to buy tickets.

“Ticket sales were all over the place, depending on the shows,” Papke said.

The November appearance of ZZ Top, which forged ahead despite the death of legendary bassist Dusty Hill earlier in the year, brought a full house. It was like old times. 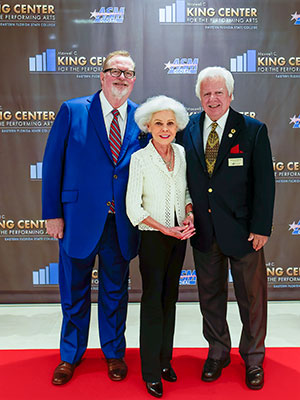 Bob Papke, left, the center’s general manager and ASM Global’s vice president of theaters, enjoys a red carpet moment with Sara and Anthony Catanese, president emeritus of Florida Tech and chairman of the King Center board.

Among the audience was Anthony Catanese, center board chairman and Florida Institute of Technology’s president emeritus.

Catanese often attends performances of the venue’s resident musical ensemble, the Brevard Symphony Orchestra, as well as the Classic Albums Live series and holiday shows such as A Peter White Christmas.

For 2022, Papke is confident that ASM Global’s muscle can bring more than 150 acts to the main stage and the 288-seat Studio Theatre.

“We have access to programs we could not get before,” he said.

Another sign of business as usual is the return of volunteers. Connie Parker, the center’s Volunteer of the Year for 2021, is delighted to be back.

“It’s so nice to be doing events each week,” said Parker, who started working as a volunteer in 2007. “It’s the people that keep me going, the friends I’ve made here and [all] of the patrons coming in to see these fabulous events.”

When it comes to volunteers, management believes the more the merrier.

“We have over 200 volunteers, but we’re always on the lookout for more,” said Papke. 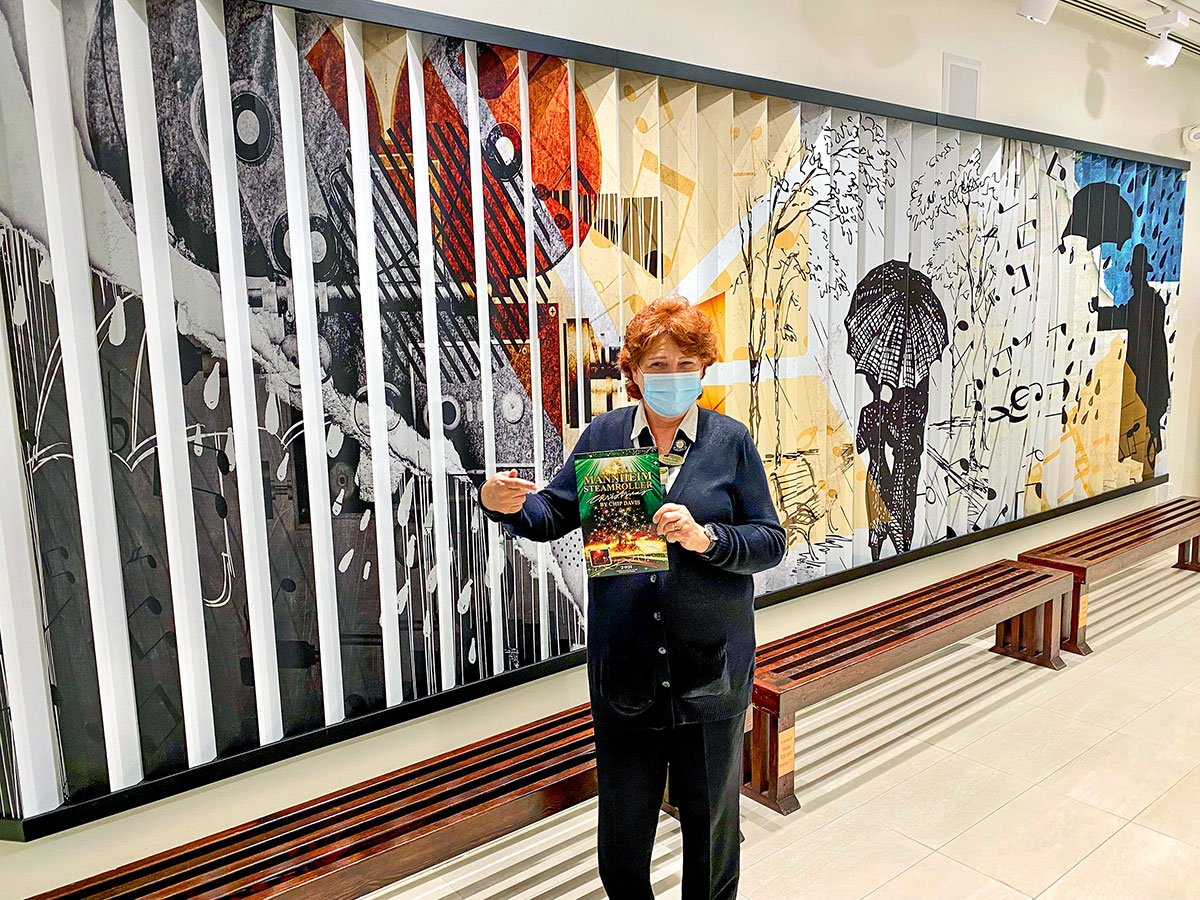 Connie Parker, the 2021 King Center Volunteer of the Year, is delighted to be back.

The volunteers reflect the center’s lifelong grassroots connection with the community. Its exhibit hall has been a favorite for local artists to highlight their work. The Space Coast Ballet also calls the venue home.

“Max indeed took the lead with the help of Lt. Gov. Tom Adams,” Catanese recalled. “The state eventually provided most of the funding.”

The venue, owned by EFSC, has enjoyed a strong partnership with one of the area’s largest employers, L3Harris, which donated $1 million toward the recent renovations. 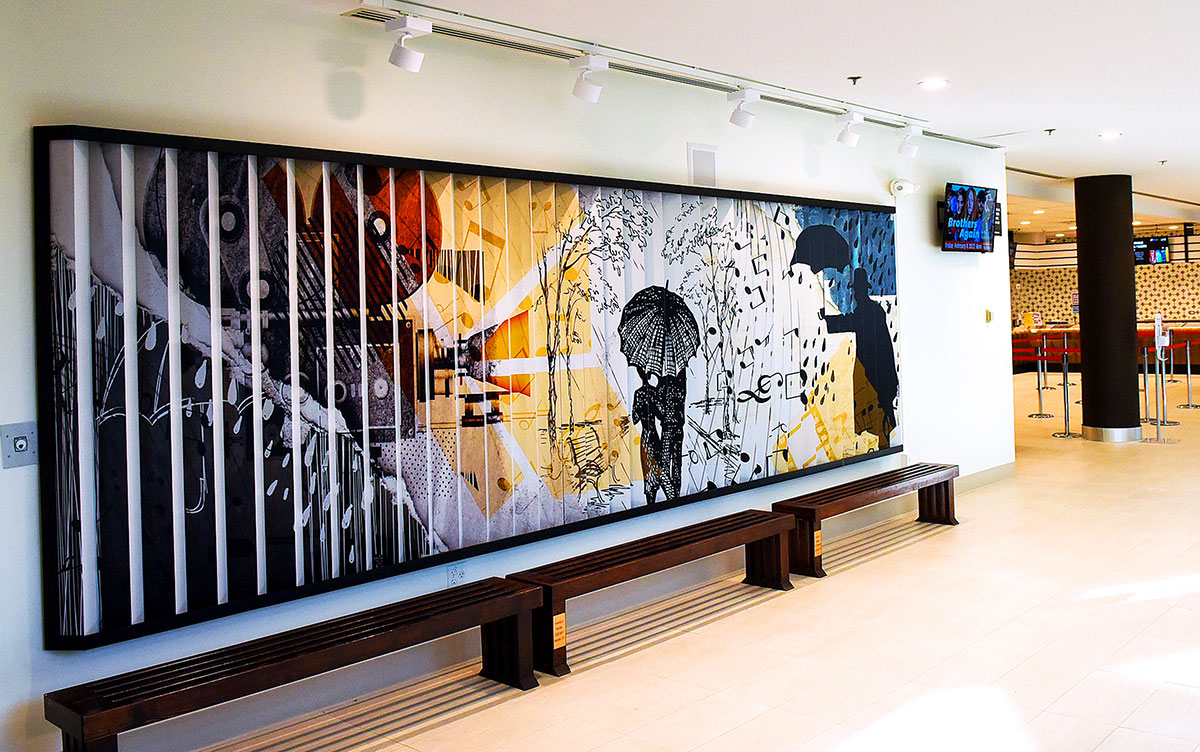 Renovations to the lobby include major art installations.

“L3Harris has always been the major supporter,” Catanese said. “They see it as a major recruiting advantage.”

For artists, the King Center is memorable. For example, Josh Groban performed there when he was still a virtual unknown. And Tony Bennett, a repeat performer, liked the acoustics so much he belted out some songs without any microphone or amplification. Bill Cosby was doing his comedy routine the day that charges against him were announced. A sky full of media helicopters hovered over the King Center that day, but Cosby kept his cool and gave the audience good laughs.

There was talk a few years back of building a larger, newer venue, but the unanimous preference was to bring the existing building up to snuff. The consensus was why mess with success.

“Without the King Center, our community would be a less attractive place to live, work and play,” Catanese said. 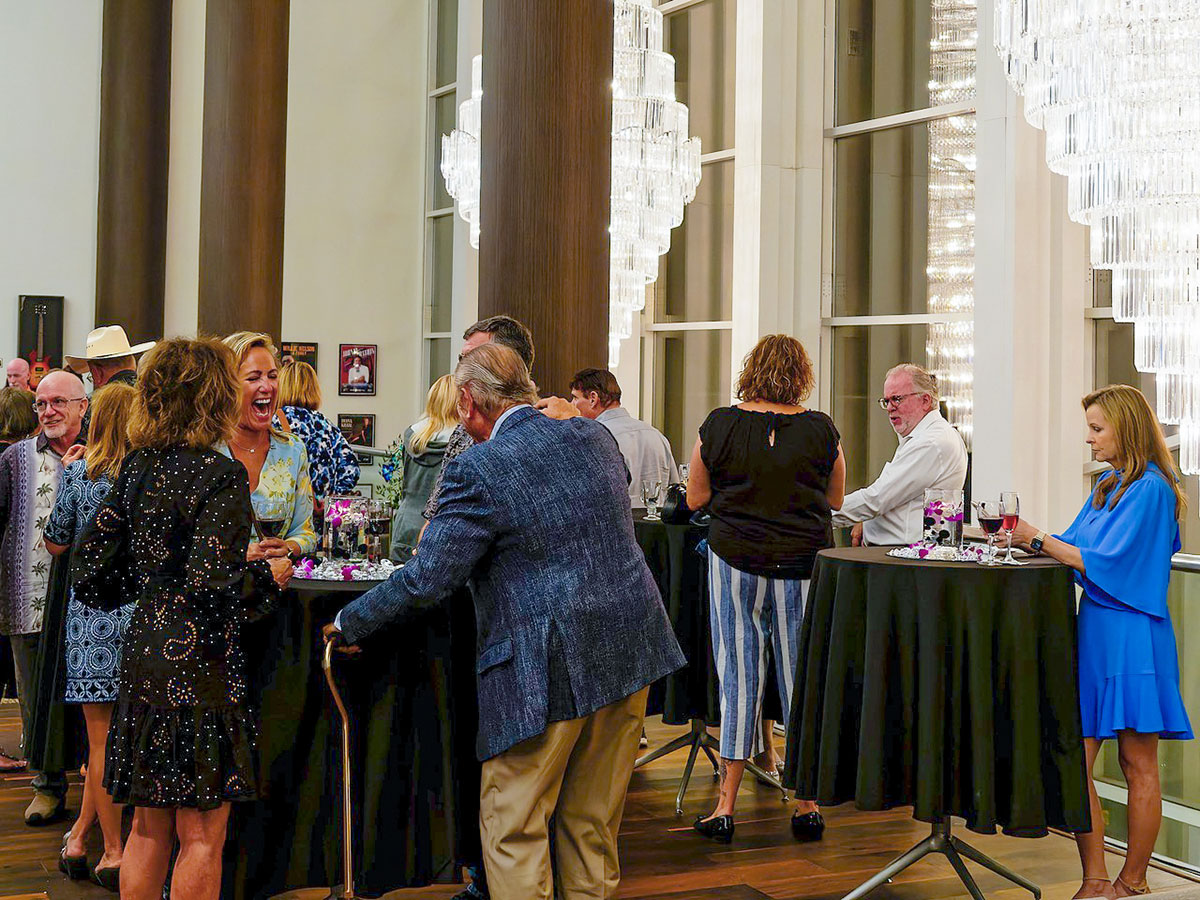 Members of the Crown Club socialize before an evening’s performance.