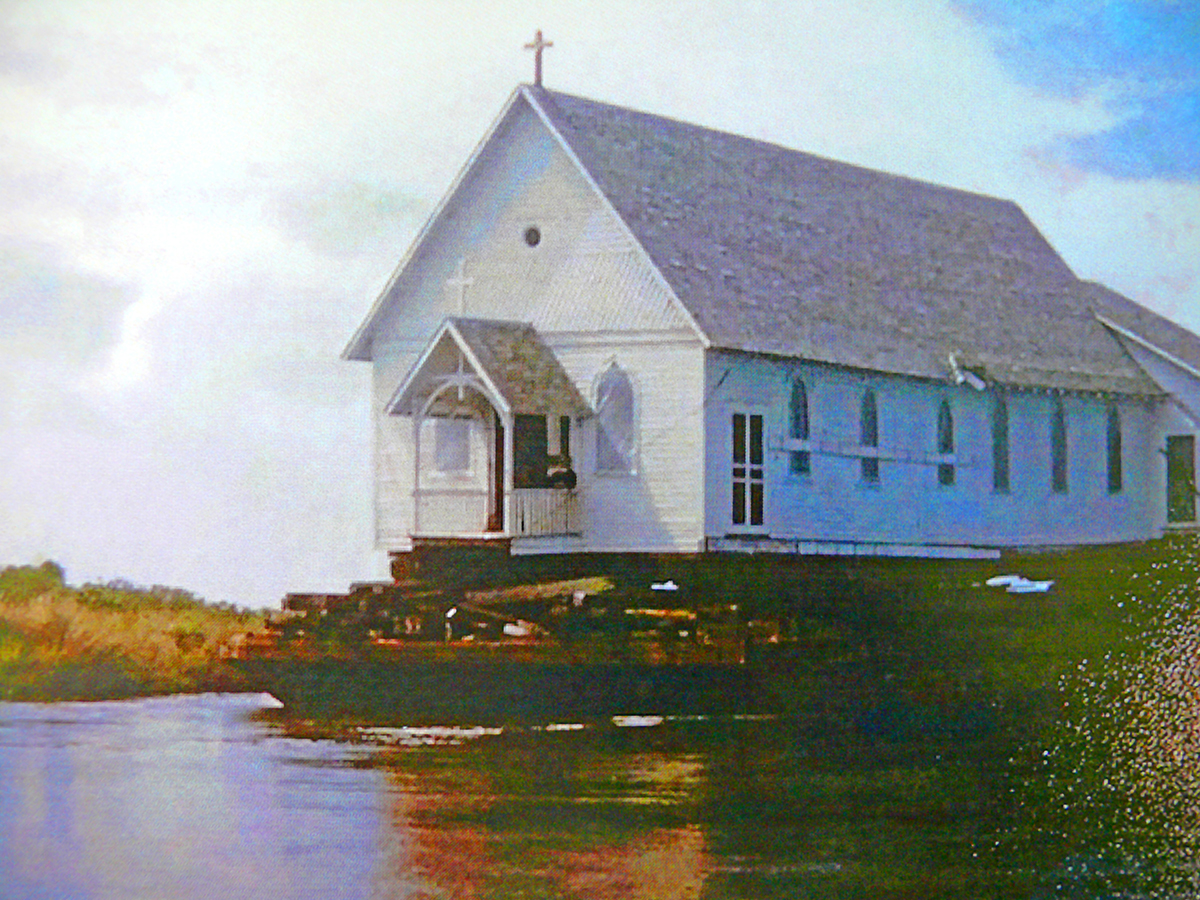 Never let it be said that the Episcopal Church of the Holy Apostles was ever mobility challenged. On the contrary, this Satellite Beach house of worship has a national reputation for getting around, literally.

The story of this peripatetic chapel is so unique that it made headlines in Life magazine and The New York Times, as well as in newspapers as far away as London. The reason for all this interest was the fact that St. Andrew’s took to the water, the Indian River Lagoon, to be exact, on its way to becoming Holy Apostles Episcopal Church in Satellite Beach.
But we’re getting ahead of the story.

It all began in the early 1950s, when young families flocked to the Space Coast, lured by the job opportunities in the booming space program. Housing developments sprouted up and down the coastline, particularly around the new town of Satellite Beach, but when it came to churches, pickings were lean.

The nearest church for Satellite Beach Episcopalians was in Eau Gallie, so the Diocese of South Florida granted permission in 1957 for a barrier island mission in the town. 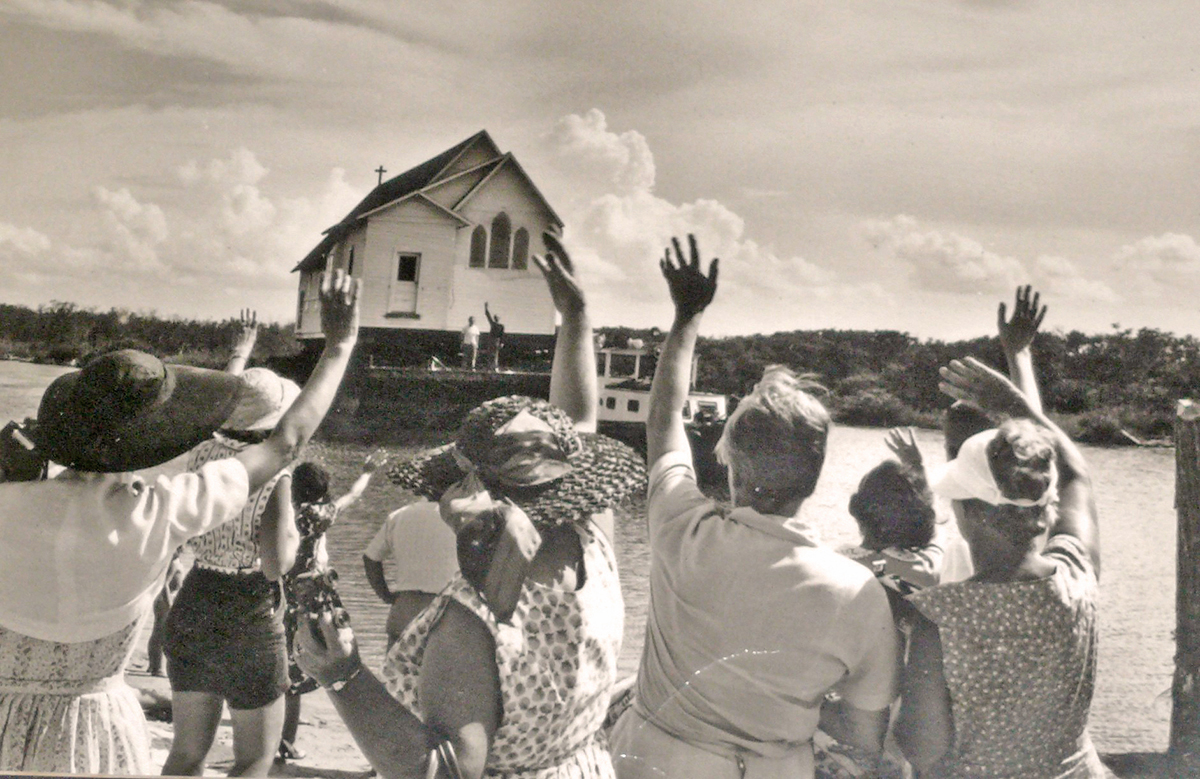 Former parishioners wave farewell to the old St. Andrew’s Episcopal Church in July 1959 as it gets underway. LIFE

ON THE MOVE
Even from the get-go, Holy Apostles had a penchant to get moving.

One of the model homes from Taylor Made Homes served as its first location, but the church had to move three times in less than two years as the model homes kept getting sold. When all the models were gone, the church was off to the converted home that then served as Satellite Beach Civic Center, where the Rev. Hugh Cuthbertson had to keep sermons short, since the space was needed by another ambulatory church later in the morning.

After the Civic Center was too small for the growing congregation, the church borrowed space from the nearby Jewish synagogue. To keep everything portable, the altar was fashioned from a door with hinged legs that could be set up in seconds, anywhere.

Through bake and rummage sales, puppet shows and dances, the congregation of 30 families amassed $7,500 to purchase 1½ acres in Eau Gallie Shores. All they needed was a church building.

As it happened, St. Andrew’s Episcopal Church in Fort Pierce had a perfectly good church that needed a home. In 1959, St. Andrew’s had unveiled its new building and no longer needing the original Carpenter Gothic church, donated it, fully furnished with pews, pulpit, bishop’s chair, baptismal font, lectern and altar, everything but the stained glass windows. They were replaced with opaque glass, the kind folks used for privacy. 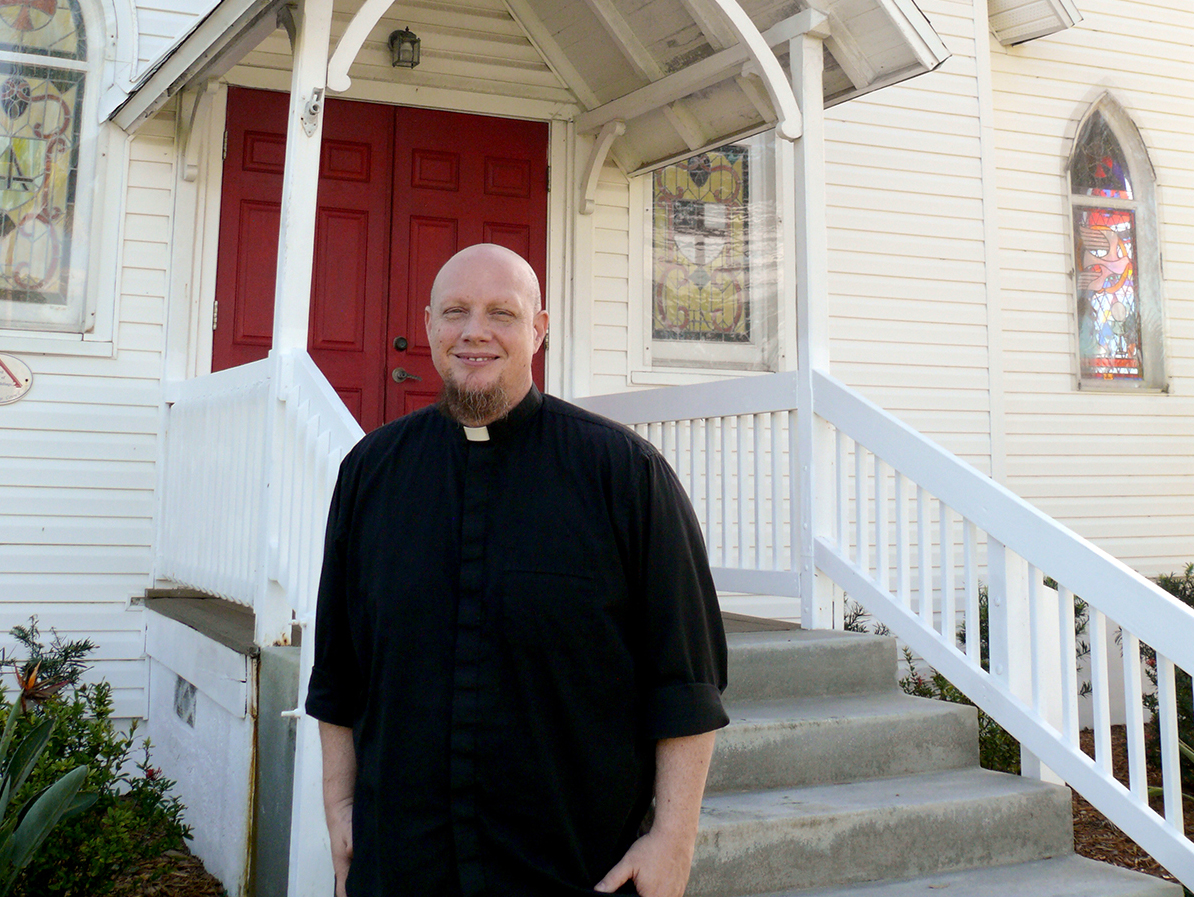 UP THE RIVER
Now the trick was getting the church from Fort Pierce to Satellite Beach.

The little 150-seat church already had a reputation for travel. Originally built on North Second Street, it was later moved to South Indian River Drive, within walking distance from the city pier. The proposed new church site was also steps away from the Indian River Lagoon. Barge operator Claire Coffee happened to be Episcopalian and happy to help. The stage was set for St. Andrew’s to transform into Holy Apostles after baptism on the river.

On July 14, 1959, after being jacked up and moved onto a barge, the little white church was off on a 60-mile adventure north. Along the banks of the lagoon were St. Andrew’s parishioners bidding farewell to the church where they had been christened and married.

Who was the experienced captain tasked with navigating a 35-foot-tall structure on a 35-foot-wide barge under six bridges and up the Intracoastal? Seventeen-year-old Harvey Rodovick was the man in charge, aided by his pregnant 16-year-old wife.

What the Rodovicks lacked in age, they more than made up in talent, because the church sailed through the 24-hour journey without any issues to a canal 500 yards from the building site. With the help of burly workers, a bulldozer, three days and telephone poles strategically placed in front of the structure, the building was pulled to its present location. 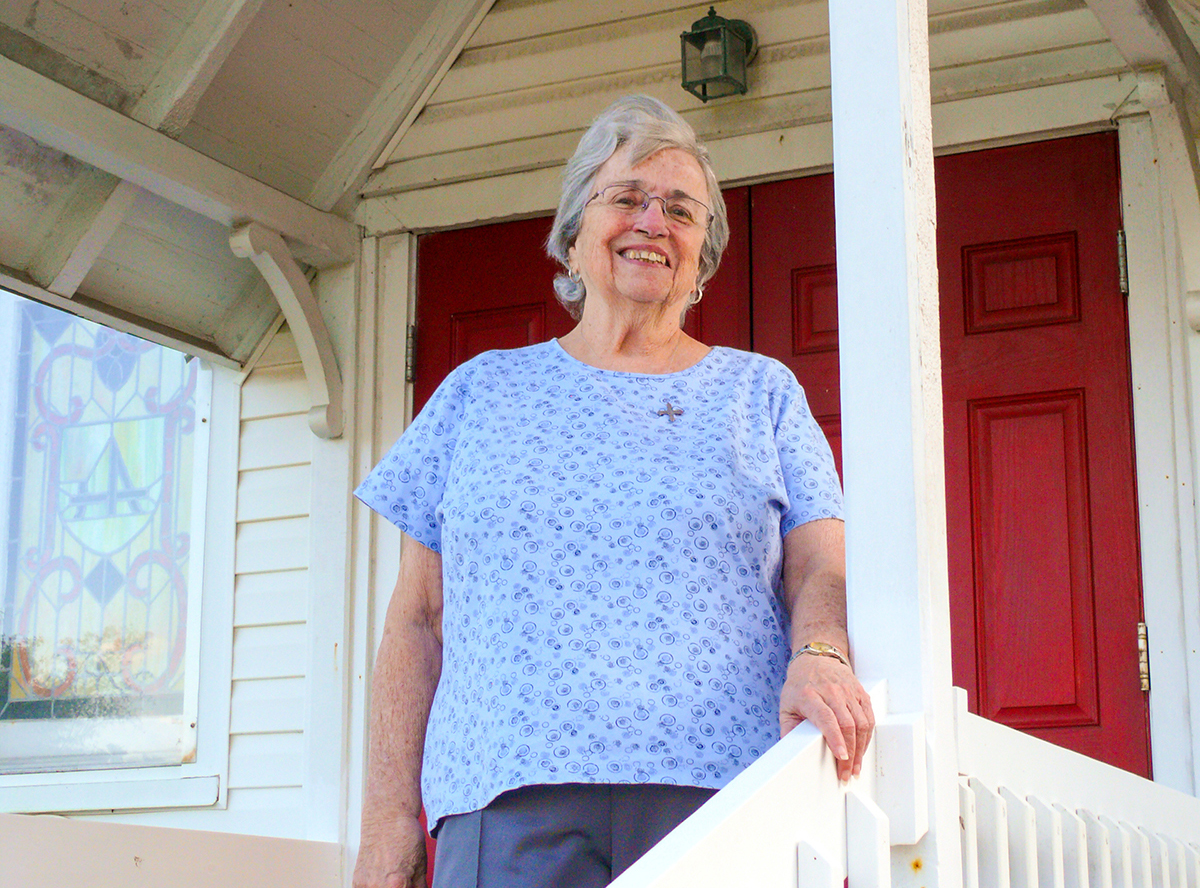 PEOPLE MAKE THE CHURCH
The story of the church that floated up the river on a barge and its honest, simple beauty are inspiring, but not as much as its congregation.

“The real beauty and the real inspiration of this place is not a building or a story, but rather the people who call this church their home,” the Rev. Todd Schmidtetter said of Holy Apostles.

Agnes Wichmann and her family joined Holy Apostles in 1964, at a time when about half of the congregation was military personnel. She remembers sermons from many a sizzling summer Sunday when the opaque glass windows were flung open to try and gather any sea breezes. Air conditioning was a dream.

“I used to hold my son by the seat of his pants as he hung out the window,” the Satellite Beach resident said.

Long accustomed to finding inventive — and inexpensive — ways to circumvent problems, the congregation developed a DIY formula for bringing stained glass back to the church without incurring too many costs.

“He came over here and we taught him the basics of how to score and cut glass,” John Emery said. “Dad got himself a little shed behind his house and that was where he worked producing those windows. He discovered the process of using glue and grout on his own and thought it state of the art. It was the fashionable new age technique of the moment.” 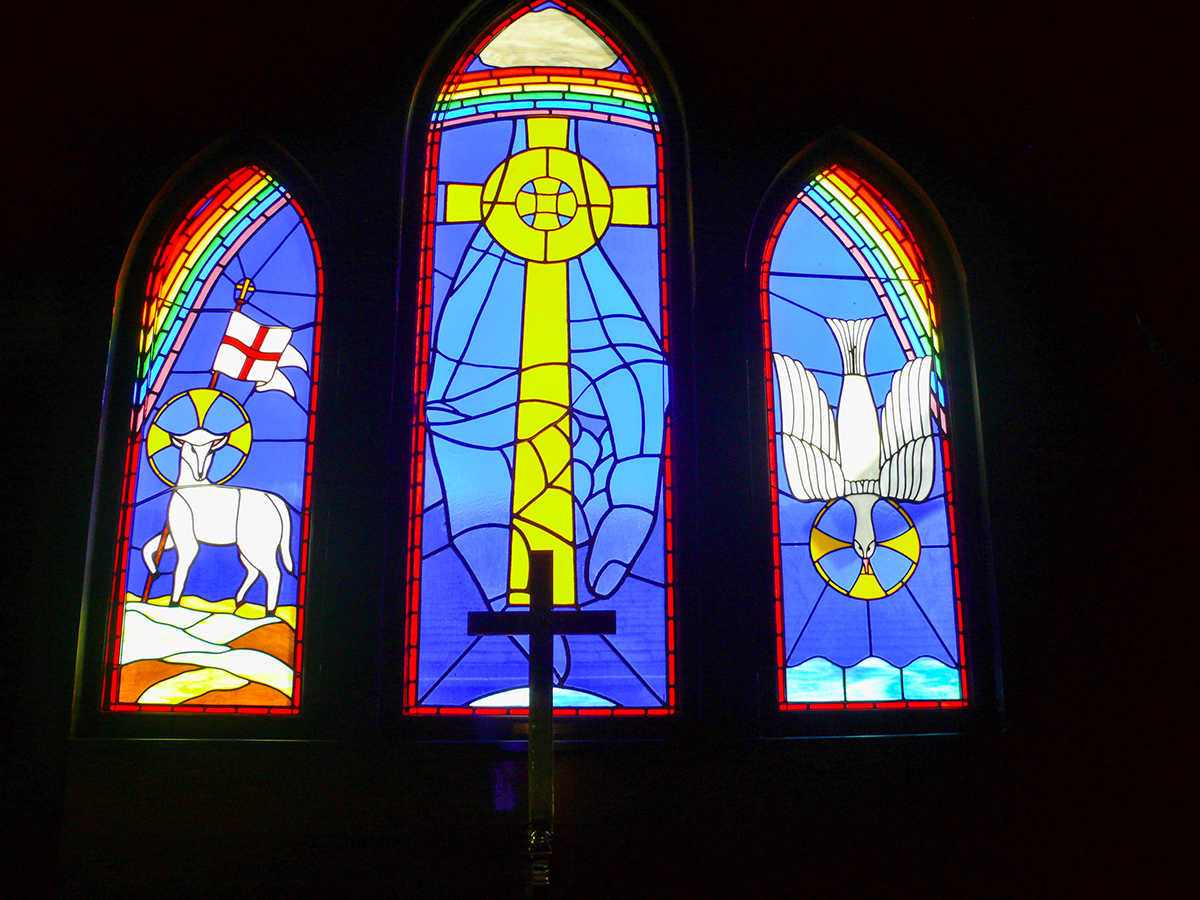 Working in a small shed behind his home, Emery created this colorful triptych, a three-paneled work of art, for the windows that are behind the altar of Holy Apostles Episcopal Church.

“My father was John and he worked on the stained glass for St. John,” Wichmann said.

One parishioner designed the 11 windows, one for each apostle. Another parishioner created the templates. Wichmann herself was one of the gluers who affixed the pieces of colored glass to tempered glass.

The labor of love took 10 years to complete.

Popular with houses and small churches in the late 19th century, the Carpenter Gothic, or Rural Gothic style of Holy Apostles is a simple adaptation of Gothic features such as pointed arches and steep gables. A perfect example is the background house in Grant Wood’s iconic American Gothic painting.

In an effort to save this vanishing genre of American architecture, several homes and churches have been dismantled and moved to other locations. Holy Apostles is one of very few to have been barged as is to be saved.

The carpenters that built these structures knew their craft well and birthed buildings that depended on Mother Nature’s own building materials to better withstand any later tormenting. The sturdy cypress used in Holy Apostles seems impervious to weather and vermin. 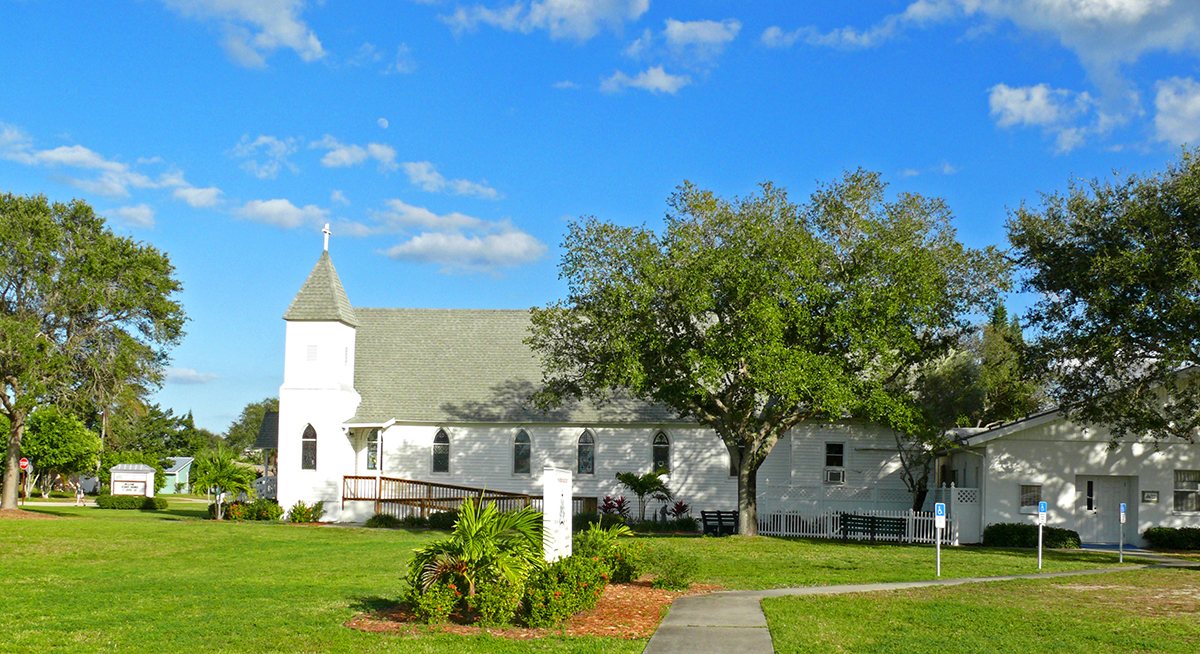 Hurricanes have come and gone without harming Holy Apostles, except for shingles lost during the back-to-back storms of 2004.

STILL STANDING
Cypress, at least Holy Apostles’ cypress, also isn’t bothered by storms. Hurricanes have come and gone, but the church has stood firm, except for shingles lost during the back-to-back storms of 2004. Clear plexiglass safeguards the homemade stained glass from errant flying debris.

“The building has never really been damaged,” Wichmann said.

Holy Apostles could well be in the National Register of Historic Places, but for its vinyl-clad skin, installed by an ever-practical congregation exhausted by the upkeep of wood.

“It got to be too much of a problem to keep painting it every couple of years,” Wichmann said.

Other than the convenient siding and a bell tower later added in celebration of its silver anniversary, the church remains pretty much as it was in the early 1900s, with its framework of beams and a network of cables that keep it from swaying too much.

Outside the church, a small memorial garden holds the ashes of more than a hundred of the parishioners, some of whom had seen the church come up the lagoon. Nearby, a statue of St. Francis of Assisi looks over the ashes of parishioners’ pets. Wichmann’s own two dogs are interred there.

“Now they can play together,” said Wichmann, who, when her time comes, plans for her ashes to be nearby.
Wichmann knows that even when she is praying by herself, she is never alone at Holy Apostles.

“I like to pray there when the wind blows and the building creaks and you smell the old wood,” she said. “You think about the thousands of people who have prayed in this old building. You feel the prayers of everybody and sense God in the midst. It’s a glorious feeling.”