It’s all the buzz

It’s all the buzz 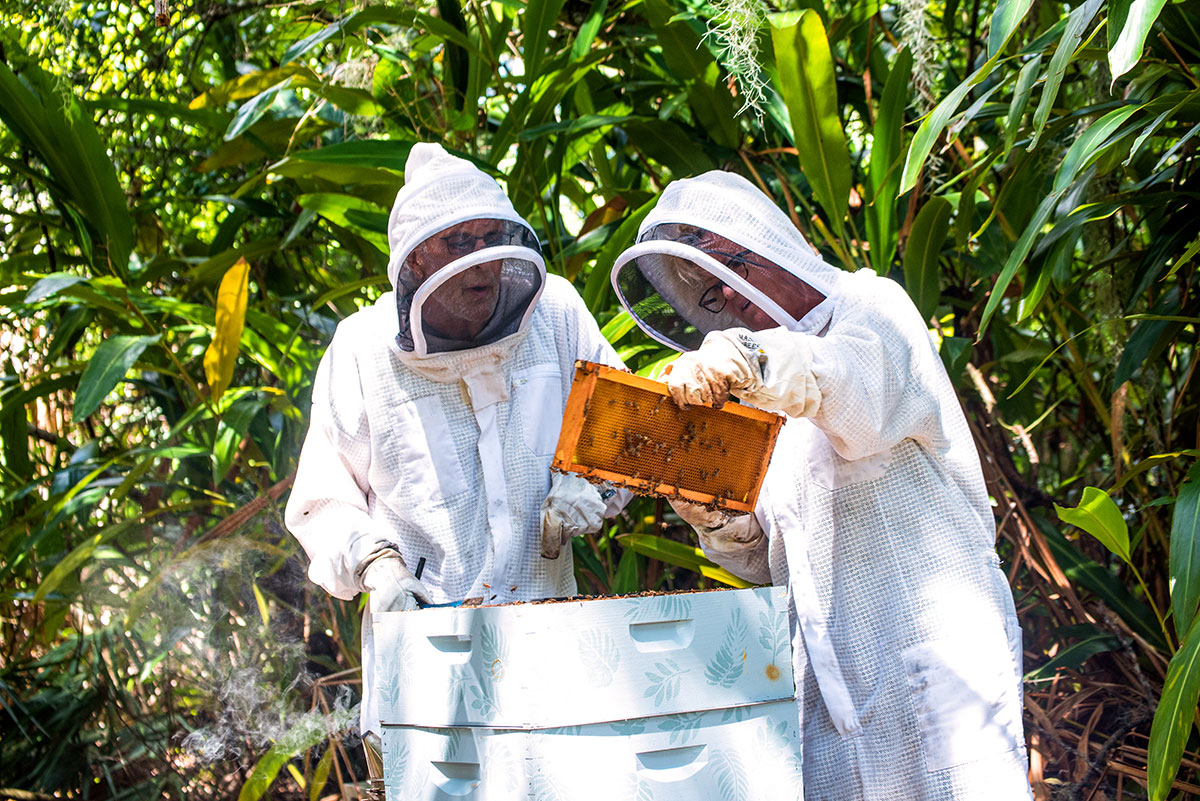 Kontnik and Sorensen collect plenty of honey from their single hive and like to share it with neighbors and friends. FRED MAYS

Backyard beekeeping can be a honey of a hobby

Have you checked the price of honey lately at the grocery store? Satisfying that sweet tooth has gotten expensive. And to think, some people get their supply of honey for free. A growing number of people in Brevard County are turning to backyard beekeeping as a hobby, and for some, a source of income.

Beekeeping has been popular for some time, but the year of lockdown from COVID-19 prompted some people to turn to their backyards for an opportunity to get away from the daily dose of bad pandemic news.

There are two beekeeping clubs in Brevard County. The Brevard Backyard Beekeepers is in Cocoa, and the South Brevard Beekeepers club is in Melbourne. Between them they have several hundred members who tend to their hives in their backyards or at communal locations.

Florida’s beekeeping guru is Jamie Ellis of the University of Florida. He says across the state there are more than 600,000 bee colonies. The bee population is healthy and expanding. Ellis attributes this to warm weather, abundance of flowers and pollinator-friendly vegetation, and climate change. 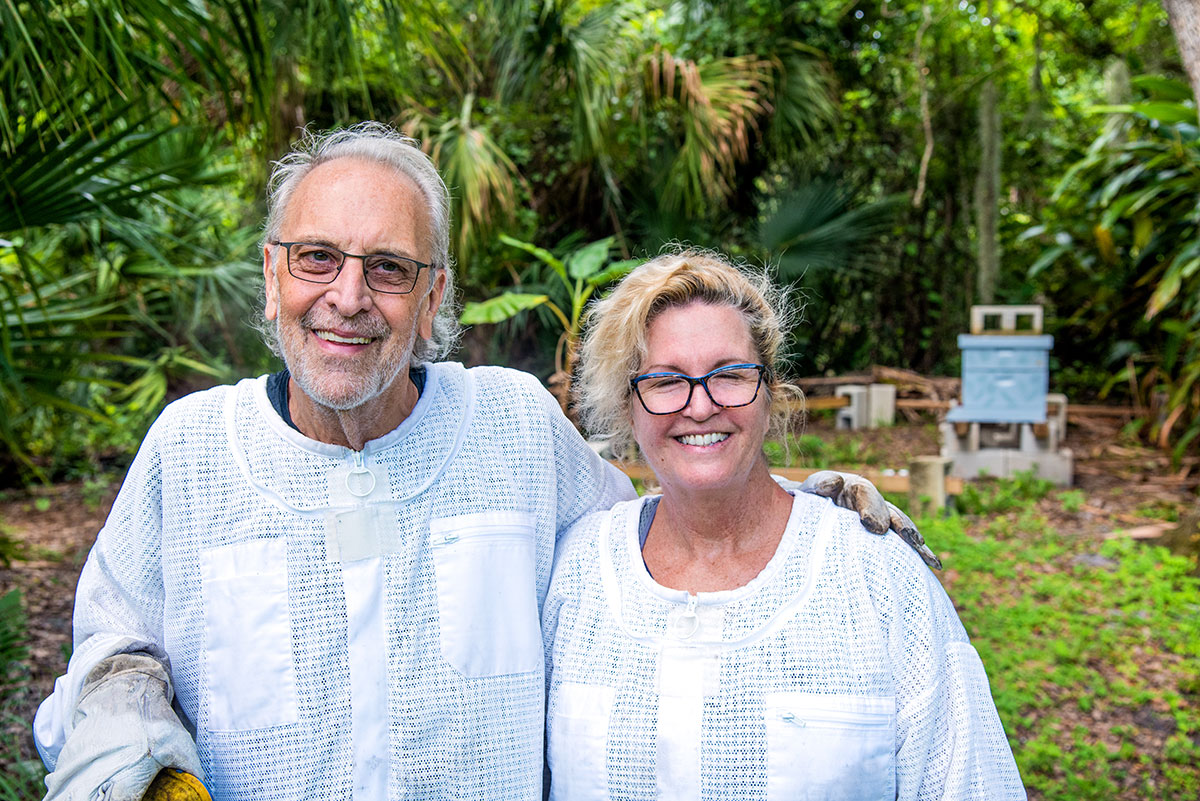 A SWEET INCOME
According to Ellis, there is money to be made with selling honey and the start-up costs are low. He says a typical backyard operation has two hives to begin with, and costs about $1,000 to set up. This includes buying the hives and the initial bee colony. There is little essential equipment, mainly protective bee suits.

Brenna Sorensen and her husband, Lew Kontnik, have a single hive in their West Melbourne backyard.

“We started when we lived in California and picked it up again when we moved to Florida,” Sorensen says.

They have registered their hive with the state agriculture department [$10 a year] and get plenty of honey, which they share with neighbors and friends. They have somewhere between 20,000 and 30,000 bees in the hive. Each, according to Sorensen, produces about a half teaspoon of honey in their short six-week lifetime. Every now and then they have to buy a new queen [$25-$30] but generally the bees do their own thing without a lot of maintenance. The couple estimates they spend, all told, one day a month on the hive. 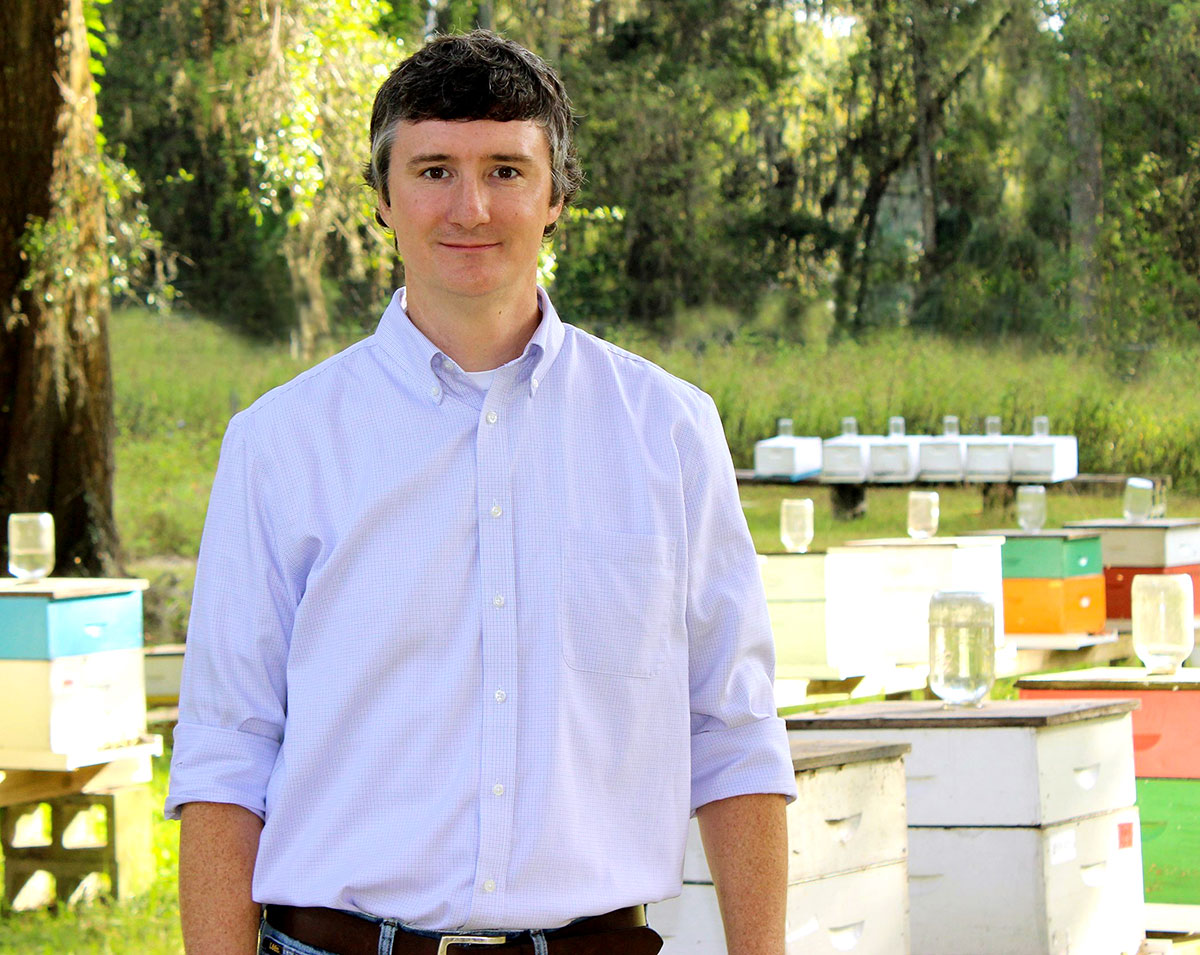 Jamie Ellis, a professor in the University of Florida’s Department of Entomology and Nematology, conducts a bee college twice a year on the Gainesville campus. UNIVERSITY OF FLORIDA 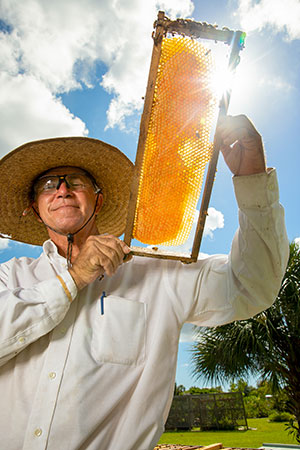 Best, a professional bee wrangler as well as a beekeeper, usually forgoes the use of protective clothing while tending to his hives. JASON HOOK

A MIGHTY PEST
The biggest headache for hive owners is the Varroa hive mites. They penetrate the hive and spread viruses among the bees, according to Ellis. They can be controlled by traps in the hive or by an ingenious method used by Sorensen — a Swiffer sheet inside the hive. Mites get trapped in the sheet and die.

One of the local experts is Clifton Best of Cocoa. He’s the leader of Brevard Backyard Beekeepers Inc., a nonprofit and one of the bee clubs in the county. Best is a professional bee wrangler, the guy you call when a swarm shows up on your property. He’s also the official beekeeper for the Brevard Zoo and gives lectures at the zoo from time to time.

The cost for removing a swarm of bees is $200-$400, and Best gets to keep the bees, which are sold off to start new colonies. He cautions against calling pest control companies because they kill the bees.

“The important thing is to have a healthy queen,” Best says. He says queens can live two to five years “and lay 500,000 to a million eggs in their lifetime.”

Best, who knows his way around a hive, usually works without a bee suit.

“They aren’t normally aggressive,” he says. To prove his point, he sticks his bare finger in a hive to point out the queen.

A fellow beekeeper, Ed Brittain of Cocoa, is more cautious. He suits up when working his hives and uses a smoker when tending them. “It keeps the bees calm.”

Twice a year Ellis holds a bee college at the UF campus in Gainesville. Dozens of beekeeping enthusiasts gather for the latest on how to start, grow and maintain their backyard hives.

Sorensen,who attended the college, says, “I’m not an expert, but I know enough.”

According to Ellis, most backyard beekeepers start out with one or two hives. Typical hobbyists have three to five colonies, and commercial beekeepers may have 100 hives or more. 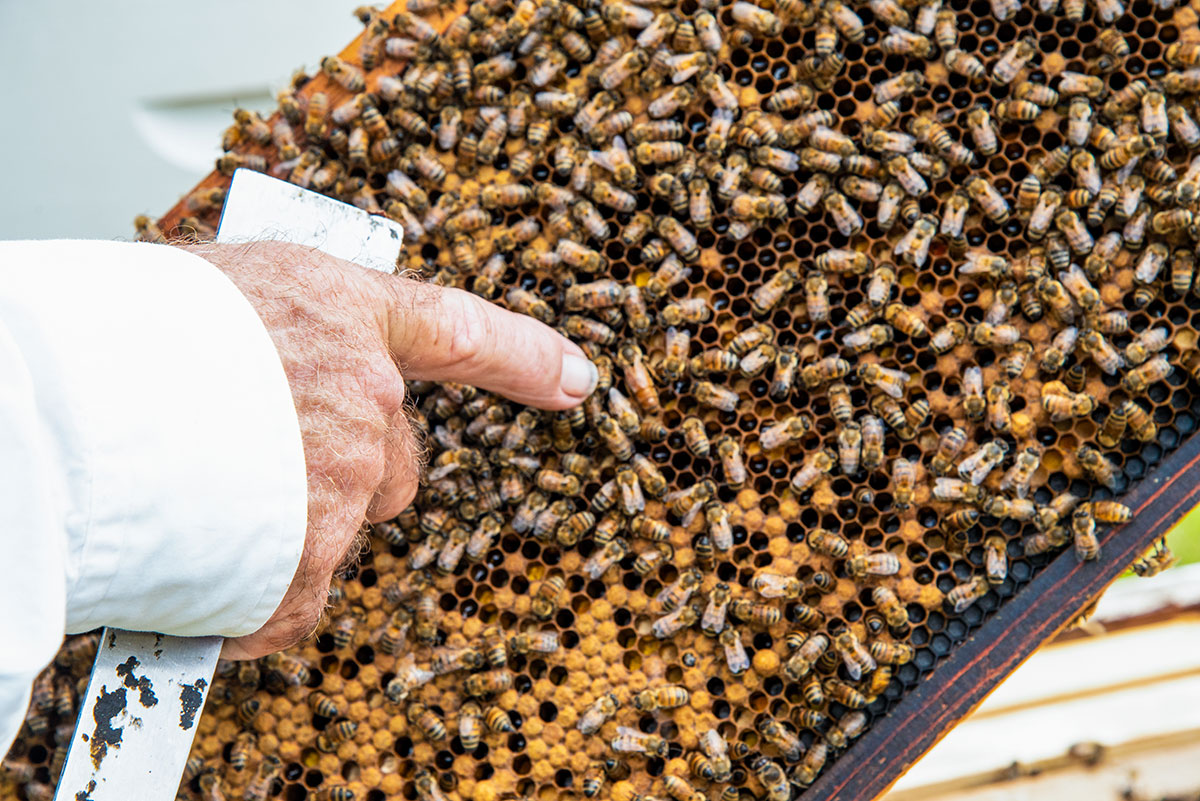 Clifton Best of Cocoa, leader of Brevard Backyard Beekeepers Inc., points to a queen bee, the most important bee in a hive, who can lay up to a million eggs in its lifetime. FRED MAYS

HIVES ON THE MOVE
Many commercial hives are migratory. Some professional beekeepers move hives around to different states and locations to pollinate plants before the growing season. One month they may be in Florida, then to South Carolina and even as far as California.

There has been a lot made of Africanized honeybees in recent years. They originally came from Africa, and now are common in Cuba and South Florida. Every now and then some of them occasionally end up in Brevard County, but they are not considered a threat in the area.

But a serious threat to backyard bees is the use of pesticides. When sprayed on flowers and other pollinating plants, pesticides can be fatal to bees and the whole hive. Bees can forage up to five miles, according to Best. That’s a lot of territory to become exposed.

How to get started? Best encourages people to join a local bee club and learn how to maintain a healthy hive. According to him, 80% of the backyard colonies are lost in the first year.

“If you don’t know how to manage them, they’re going to die.”

He says diseases spread by ticks and mites are the main cause of hives dying off.

According to Ellis, many people find backyard beekeeping a wonderful hobby and several hundred beekeepers in Brevard County agree with him. 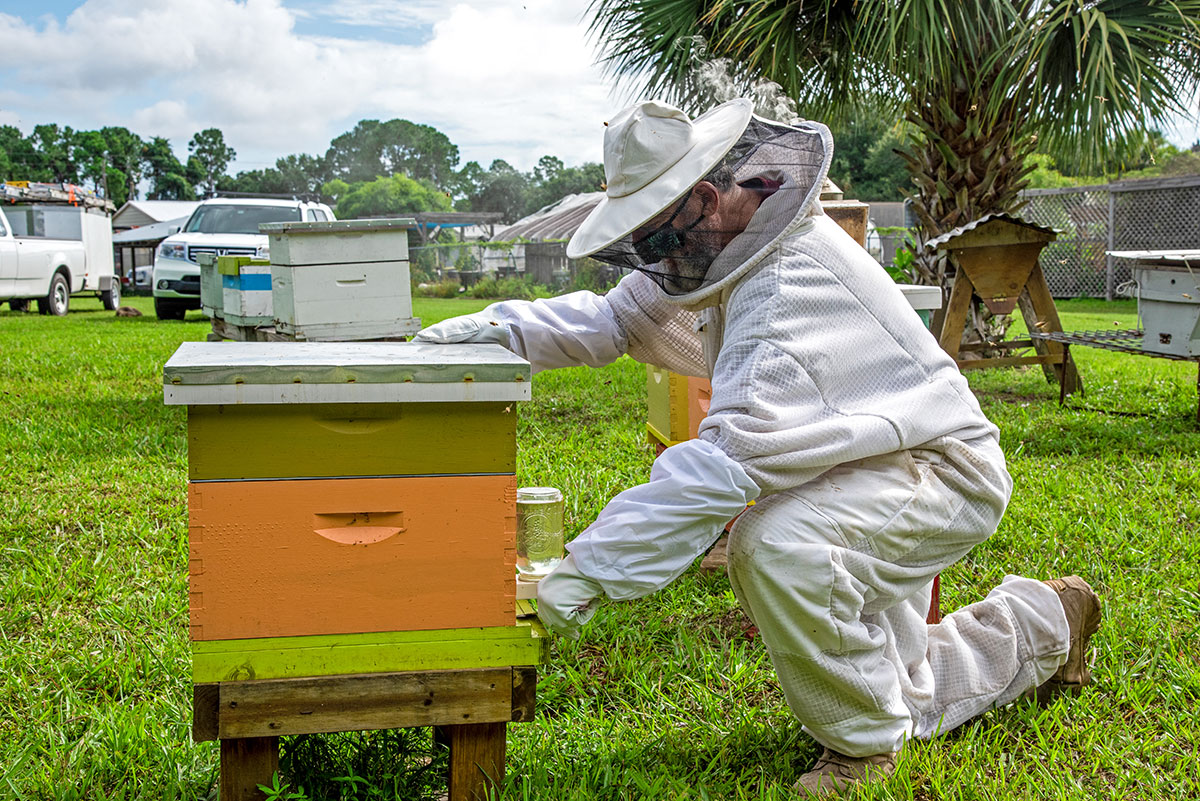 Ed BrittaIn of Cocoa suits up and uses a smoker to avoid being stung when checking on his hives. FRED MAYS

Here are the bee clubs in Brevard County