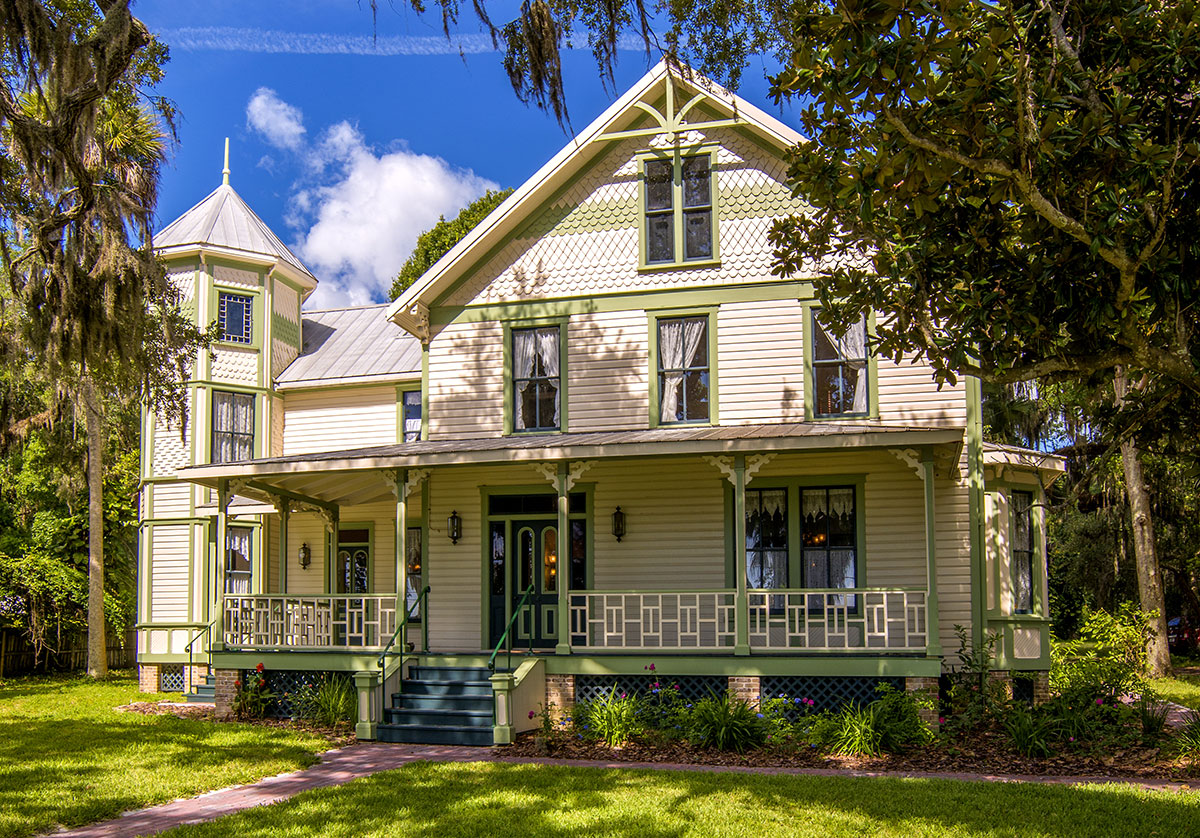 Volunteers labor for years to preserve home of a remarkable pioneer 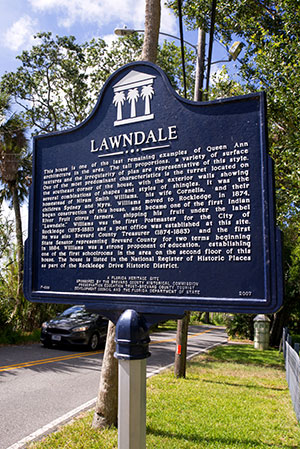 The Florida State Historical Marker tells the history of Lawndale.

Lawndale is pushing 150 years, but the historical home along the banks of the Indian River in Rockledge does not look its age. Thanks to some 20 very good friends, Lawndale remains vibrant and ready to welcome guests.

“We are thrilled with the positive response of our visitors,” said Carole Pope, president of Preservation and Education Trust Inc., which was formed by volunteers who scraped, painted, caulked and otherwise labored to return Lawndale to its original glory.

“The group evolved to save the house when we learned the county was considering selling the property,” Pope explained.

These friends have worked for 20 years to restore the residence of Hiram Smith Williams, a fascinating individual who rose from carriage maker to the area’s first state senator.

In 1874, Williams traveled from Alabama to Rockledge with his family and all he could bring by wagon and steamboat to seek a better life during the turbulent Reconstruction Era that followed the Civil War. 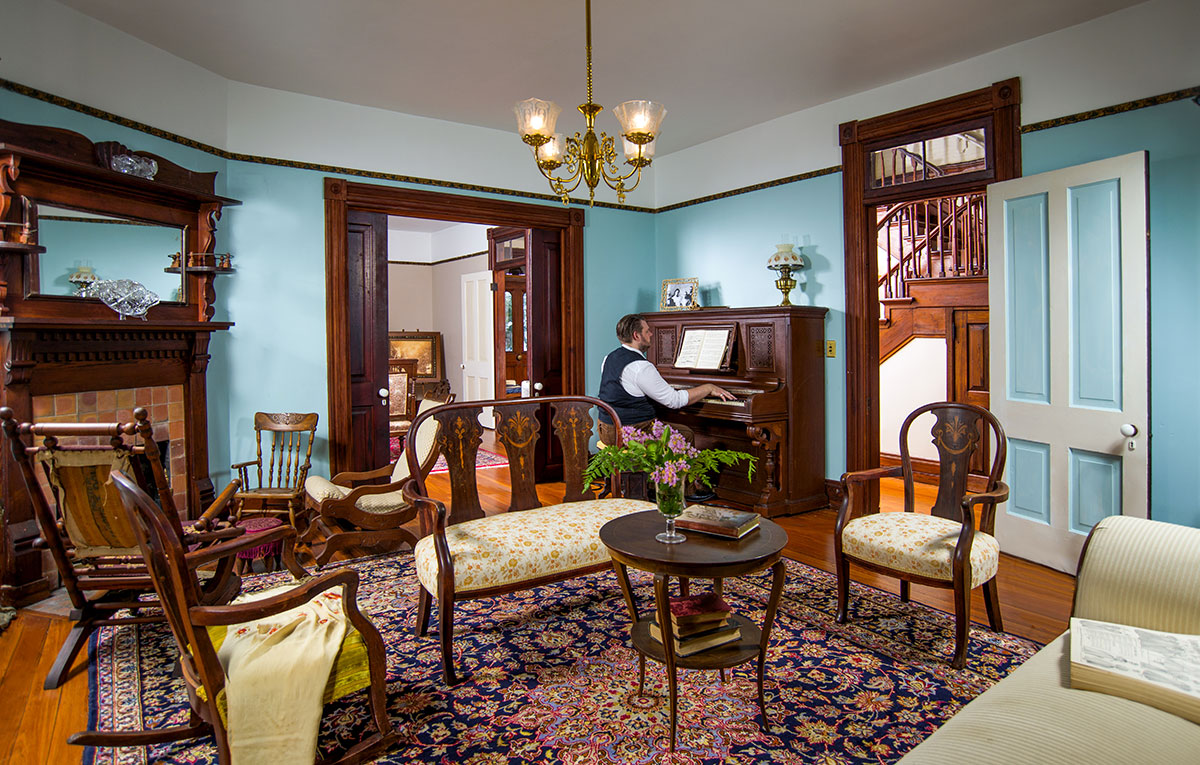 Docent Brandon McKinney plays the piano that was given to Williams’ daughter, Myra, when she graduated from Rollins College in 1898. 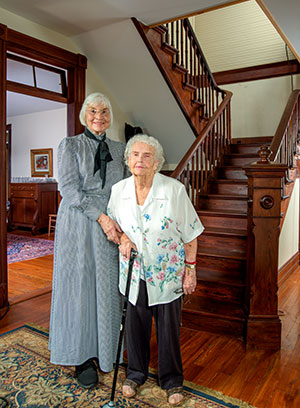 Carole Pope, president of Preservation and Education Trust, left, stands with Margaret Rainwater at the bottom of the stairs of Lawndale, the home her grandfather, H.S. Williams, built in the late 1800s.

TESTAMENT TO TENACITY
He started working on Lawndale immediately, but the project took him two decades to complete. The entrepreneur easily segued from building conveyances to growing oranges, a business that brought him success, despite challenges such as freezes.

“Hiram was tenacious, pushing through setback and trial,” Lawndale volunteer Brandon McKinney said. “I think it took a special kind of person to go through what he did and keep going. The house he built is a testament to his tenacity. It’s more than just a pretty house, it’s really the spirit of what brought people here, and how they pushed through.”

Under the Lawndale label, Williams shipped crate after crate of the fruit he grew on the hundreds of acres that surrounded the home. In his heyday, Williams owned groves that stretched from U.S. 1 to Rockledge Drive.

“He helped to establish Central Brevard as a center for fruit packing,” Pope said.

A REAL GO-GETTER
A self-made man, Williams was not one to take it easy. He was Rockledge’s first postmaster, the county treasurer in the mid-1880s and eventually a state senator.

“He spent much of his time promoting and leading the community,” Pope said.

In his later years, he established the Brevard Telephone Co., the first telephone service in the county.

A huge fan of education, Williams included a schoolroom in the family home, where his offspring, Myra and Sydney, were joined by other area youngsters.

After her father died in 1921, Myra remained at Lawndale to run his citrus groves and other businesses. She later donated some of the groves for the Wuesthoff Hospital, now Rockledge Regional Medical Center. The remaining land became housing subdivisions. Of the acreage that once encircled Lawndale, only two acres, adorned with giant live oaks and magnolia trees, remain. 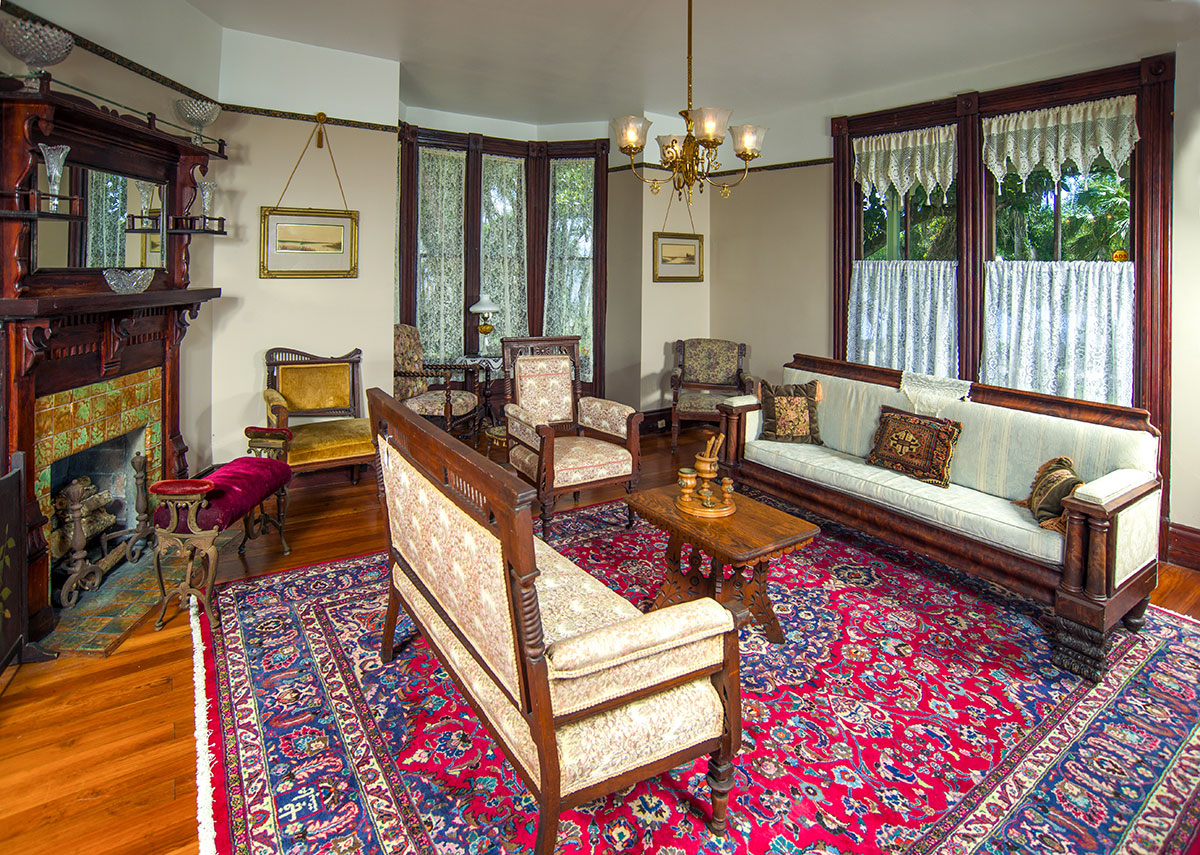 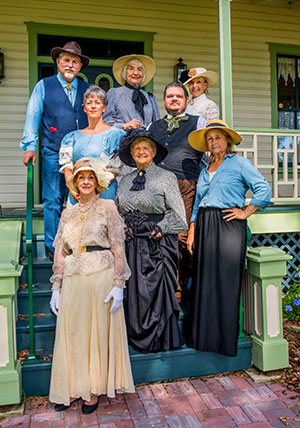 ONLY A FEW REMAIN
Both historically and architecturally significant, Lawndale is one of a handful of ornate Queen Anne-style houses in Central Florida. It fortunately survived with most of its architectural features intact, including the finely carved mantels attributed to Williams’ abilities as a carriage maker. Lawndale remained in the Williams family continuously until it was sold to the county by Williams’ granddaughter, Margaret Williams Rainwater, with a stipulation.

“Margaret sold the property to the county with the understanding that it was to become a museum,” Pope said.

Thanks to former county commissioner and Rockledge resident Sue Schmitt Kerwin’s interest in saving this historical asset, the sale became a reality in 1989 through the Beach and Riverfront Purchase initiative.

“It was a two-for-one deal, for it preserved the riverfront and also a historic treasure,” said Pope, who lives just a few houses down from Lawndale.

“We also give visitors information about the three National Register Historic Districts so those interested can do driving tours of these areas,” Pope said.

In conjunction with the Lawndale tours, the City of Rockledge will open its nearly 1926 restored municipal building during the same hours, allowing visitors to see how municipal services were delivered during the early part of the 20th century.

“They have a restored 1924 LaFrance fire engine and a police station complete with three jail cells,” she said. 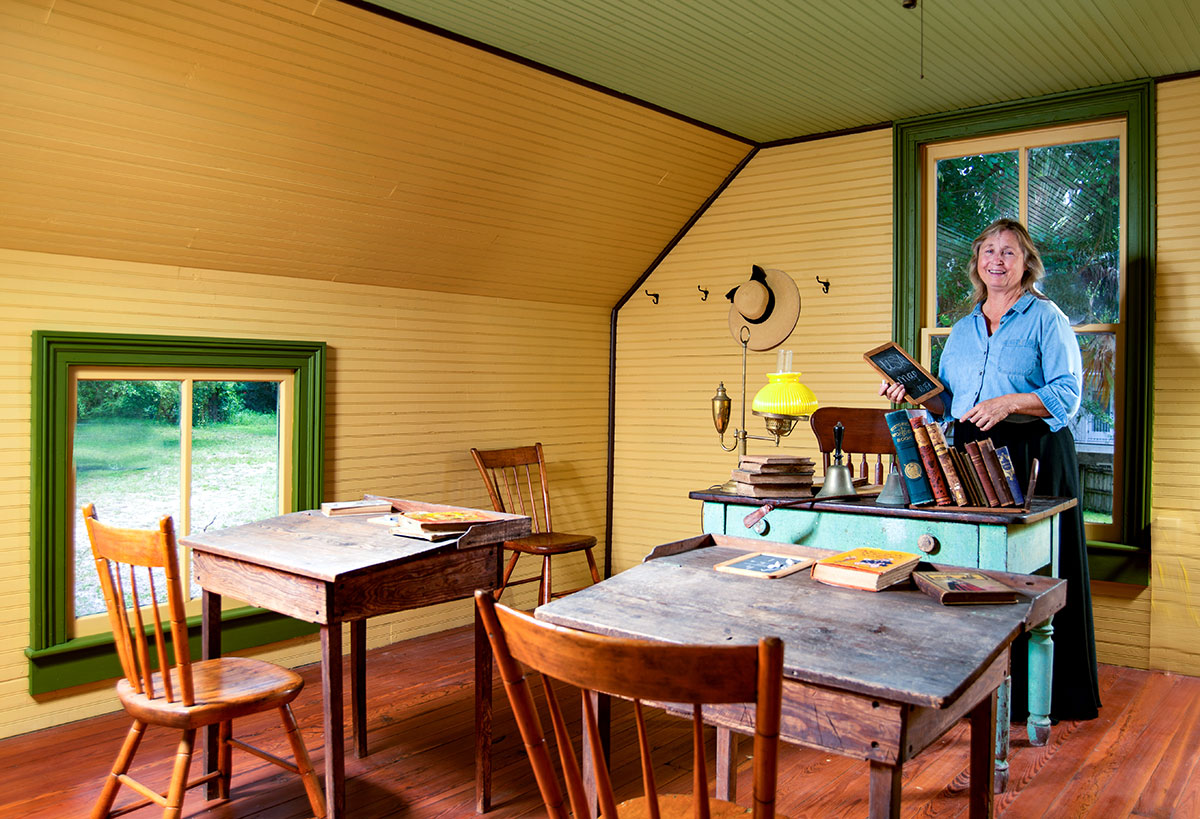 Williams so believed in education that he designed a dedicated schoolroom, where docent Laurie Broadway greets visitors, when he built Lawndale. 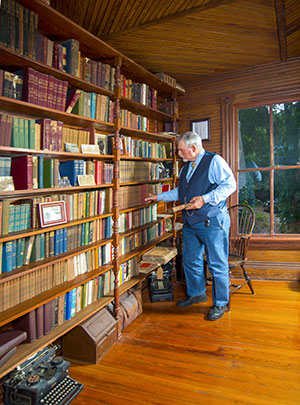 Frank Repass checks out the volumes at Lawndale’s extensive library.

ONGOING PROJECT
For someone who was not an architect, Williams had an excellent eye for design. Vistas of the Indian River abound from the huge windows of his 3,500-square-foot residence. Even on a hot day, the house remains cool, thanks to the river breezes that seem ever-present.

Though the busy, busy Williams must have had precious spare time, he thoughtfully crafted an enticing wraparound porch where he could rock away the evenings listening to the birds. On the second floor, he created four bedrooms, all with outstanding river or woodland views.

The trust has furnished the house as it would have looked in the 1870s, right down to the schoolroom above the kitchen. Some of the pieces are original and some are period-appropriate treasures obtained through interchanges with other historical homes that are part of the Museums of Brevard.

Just as with any home renovation, the work never ends.

“We still have two large projects to accomplish, the restoration of an upstairs bathroom and the complete restoration of the carriage house with a restroom, office, conference area and display space,” Pope said.

In addition to countless hours of volunteer labor, Lawndale’s extreme makeover was made possible with two state preservation grants, plus generous public support. 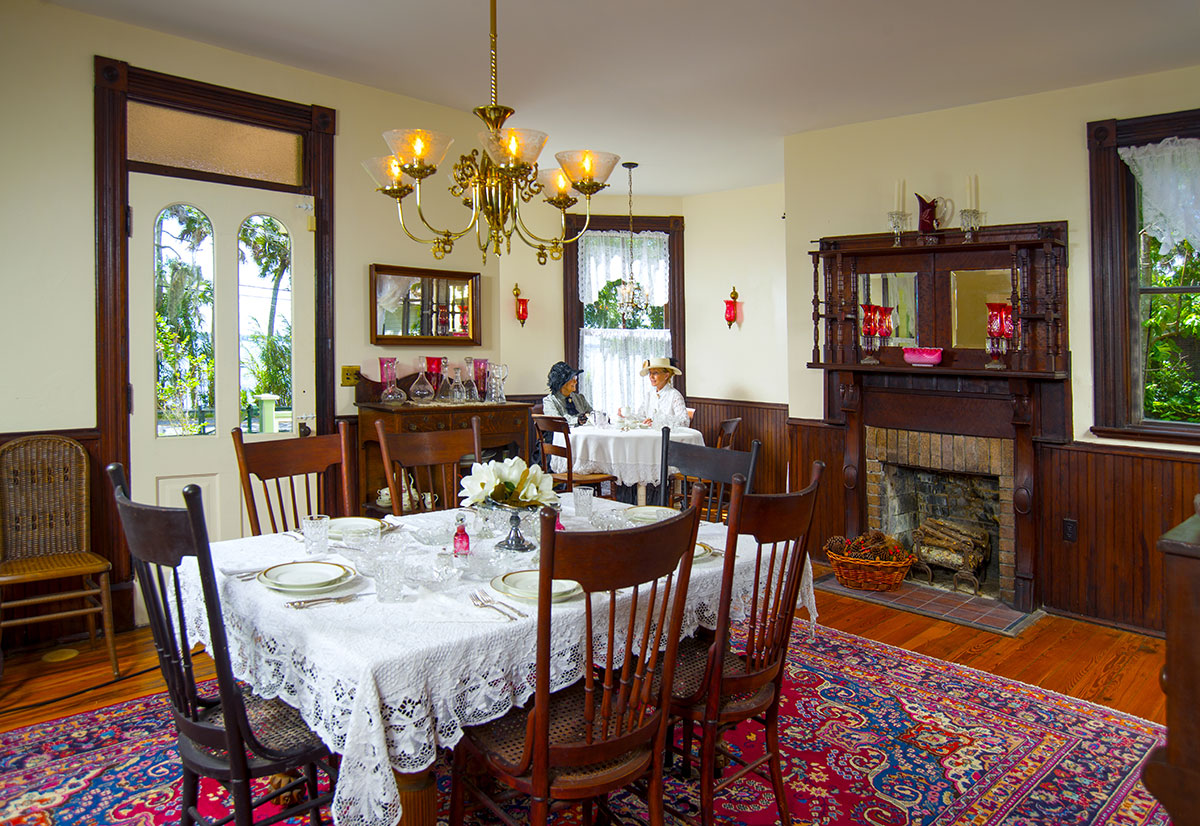 Docents Linda Beck, left, and Mary Repass enjoy tea in the tower alcove of the dining room at Lawndale.

CARRYING STORY FORWARD
It is easy to fall under Lawndale’s spell, as volunteers Frank and Mary Repass well know.

“Lawndale is a wonderful example how one person can make a positive development in our world,” Frank Repass said.

Mary Repass has kept her eye on Lawndale for years.

“Initially, I was enamored with its architecture,” she said. “Then I started learning about Hiram Smith Williams. His story is not just about a self-made intellectual who achieved success through his multifaceted skills. Williams showed genuine concern for his community and the basics necessary for its development. He proved this by opening up his home school to locals, then investing his own money to build a schoolhouse when his space became too small.” 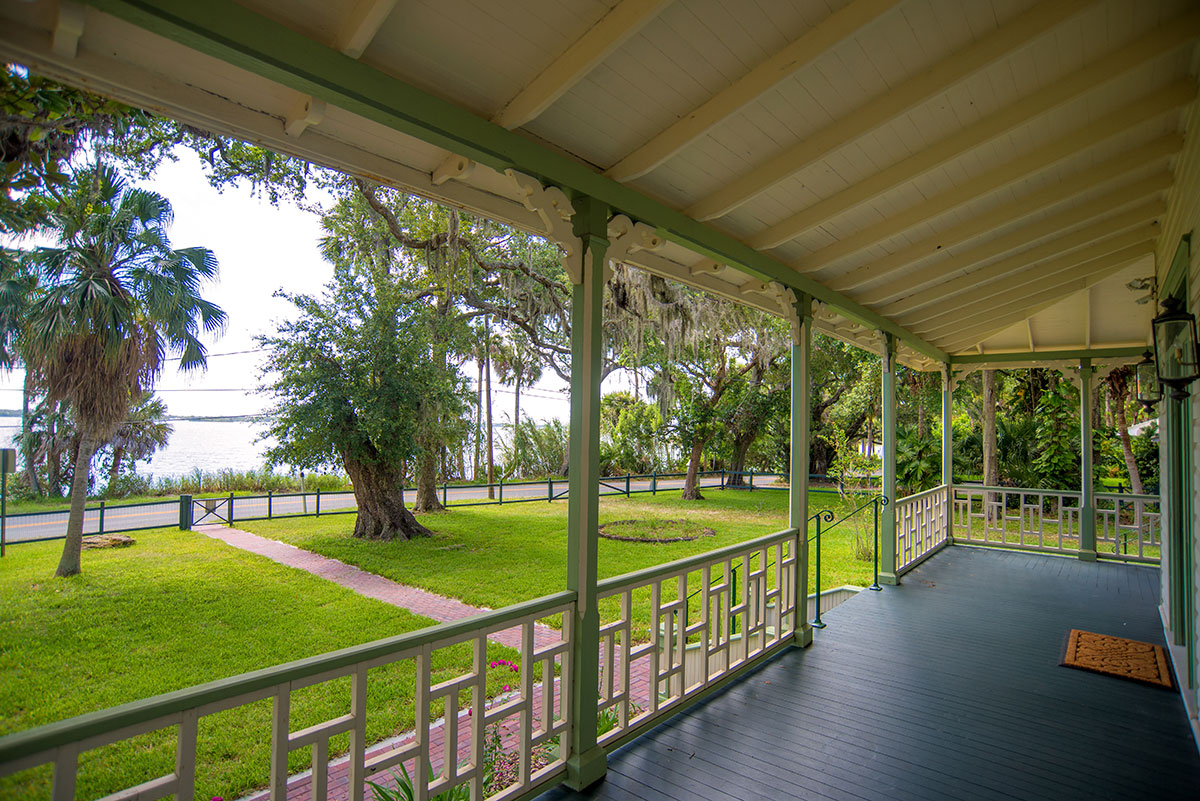 Lawndale’s expansive wraparound porch with its Chippendale-style railing offers a magnificent view of the Indian River.

Mary Repass adds that Williams’ largesse reached beyond Brevard when he willed $2,000 — a significant sum in 1921— to the Children’s Home Society in Jacksonville, the nearest orphanage.

“Everything about his legacy makes me proud to carry his story forward,” she said.

Lawndale serves as a reminder of Brevard’s rich history, a history that spans far beyond the space program for which the area is famous. As development continues in the county, more of this part of Brevard’s past unfortunately fades away.

“We lose little pieces of that history to the wrecking ball,” McKinney said.

“The loss of each building representing our history in this area makes the continued preservation of Lawndale all the more important.” 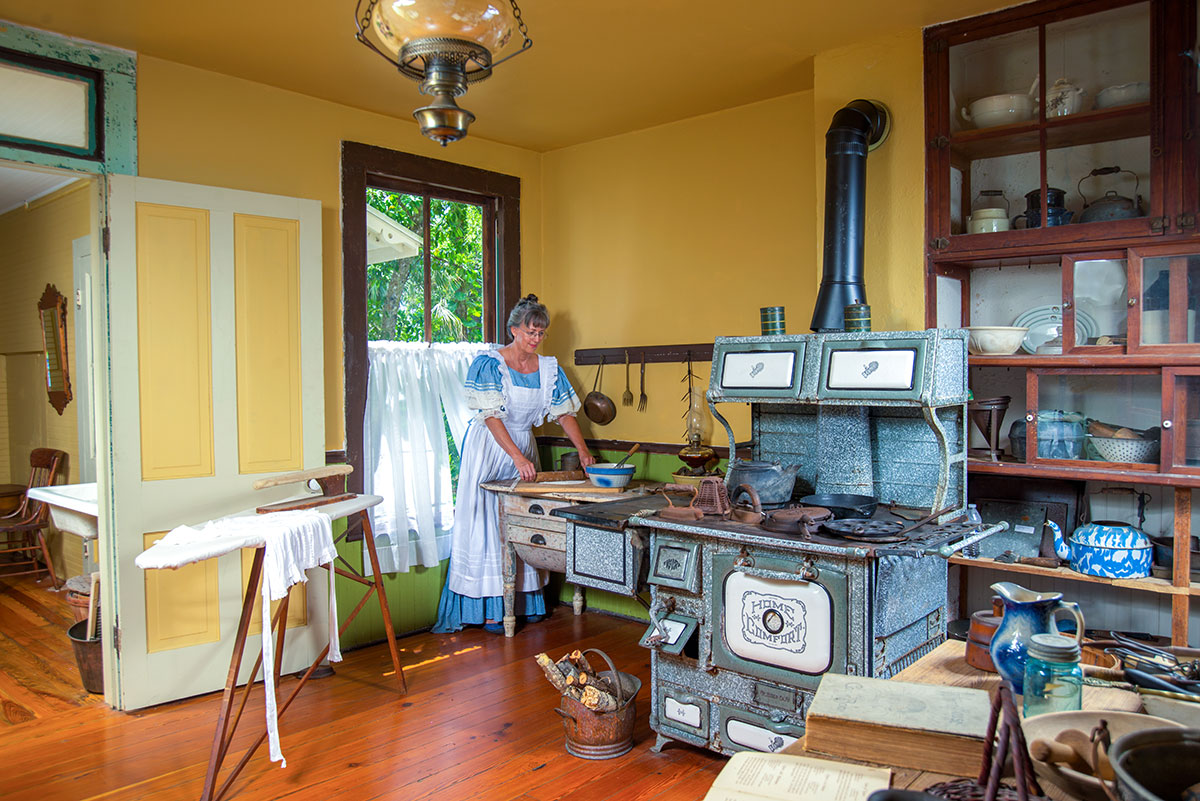 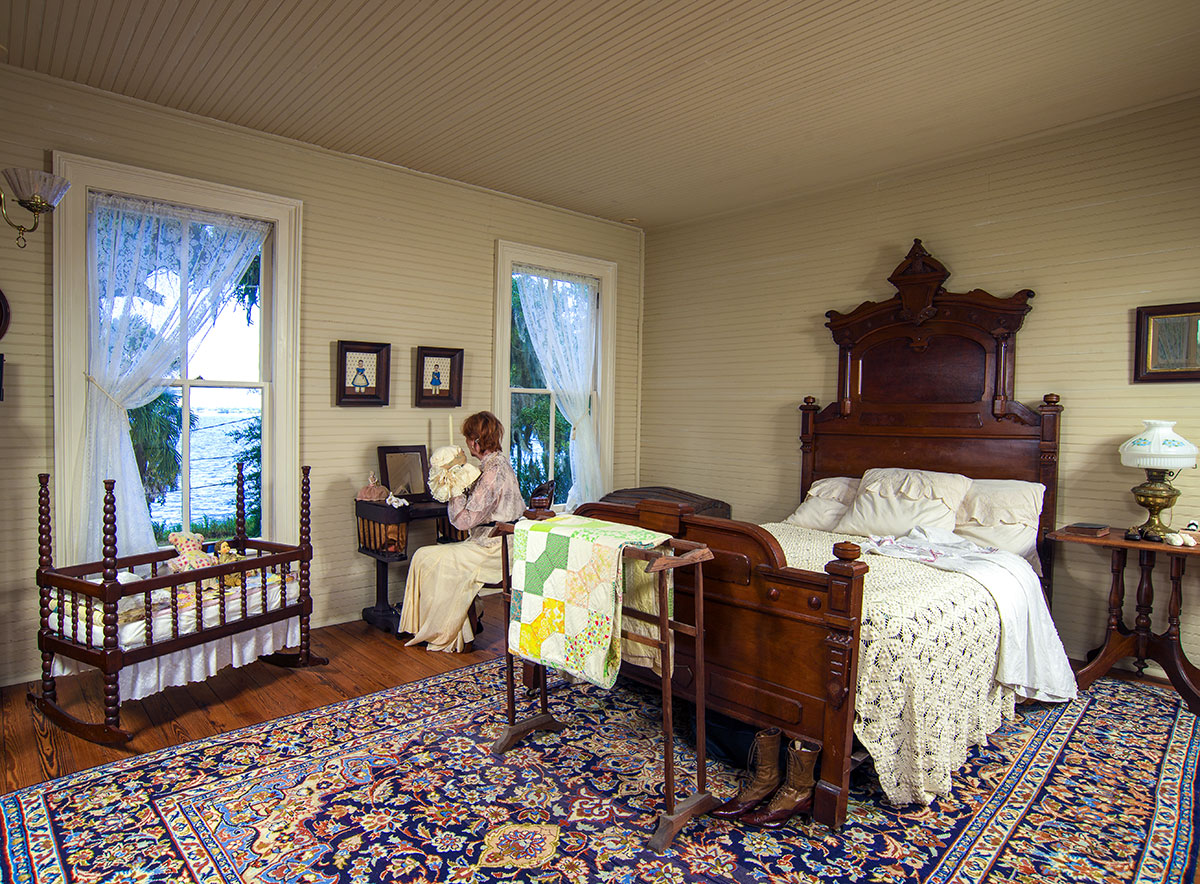 Docent Rebecca Corbitt tries on the latest turn-of-the-century hat at the dressing table in Lawndale’s master bedroom. Large windows not only brought the air and light into the historic home, but afforded its residents with constant views of the Indian River.

Admission: A donation of $10 per guest is suggested to aid with restoration efforts.