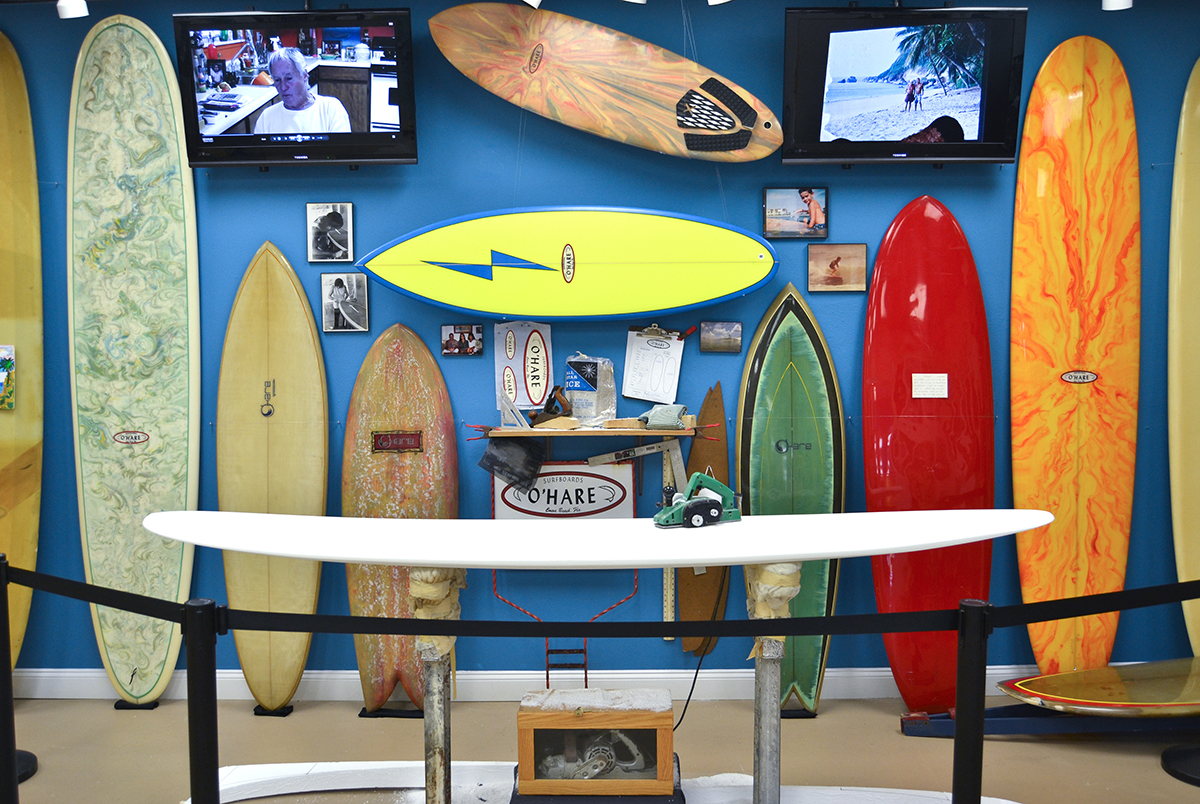 Tucked away in the back of the water sports rental venue of Ron Jon Surf Shop in Cocoa Beach, the Florida Surf Museum serves as the historical connection to the sport of surfing throughout the state. 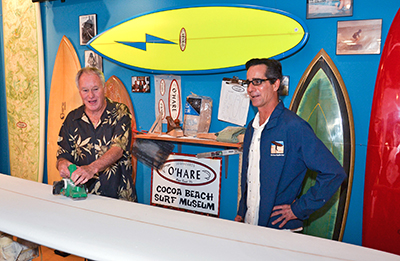 Dedicated to preserving the state’s rich surfing heritage, the nonprofit museum has become one of the Space Coast’s most highlighted and recommended

stops for visitors and residents, whether surfers, waterman/women or others, to enjoy and explore.

Founded in 1999, the Cocoa Beach Surf Museum, as it was first known, was the vision of Cocoa Beach resident Sean O’Hare.

O’Hare, the son of the late Pat O’Hare who was one of the first East Coast surfboard builders, said he felt compelled to share the concept of creating a place where the Cocoa Beach surfing community could share both stories and memorabilia after returning from a trip to California in the mid ’90s where he visited the Oceanside Surf Museum.

“After taking a look around that museum I felt like I was at home, literally,” he explained. “It looked like the inside of our house, filled with old surfboards and memorabilia — none of which was collected, but just acquired and kept over the years by my dad. The real stuff, you know.”

According to the younger O’Hare, his dad wasn’t “crazy about the idea of sharing it or being associated with starting a community museum. He said it made him feel old and joked we’d wheel out the old guy at any event we might have to ask him to tell tales of his surfing adventures, and the old days, etc.,” he added.

And he admitted there was some truth to his dad’s jokes, as his friends and family loved hearing these stories and were proud of the humble person his father was and the fact he kept them riding waves even when he couldn’t. 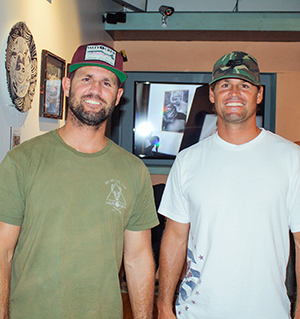 One of the most popular exhibits and events, held at the museum in 2016, was that of well-known former world tour surfers and Satellite Beach native twin brothers, C.J. and Damien Hobgood.

After he managed to save $800, which was two month’s rent, the younger O’Hare opened a tiny downtown shop to start the museum, of sorts.

“The space was so small one could barely turn a longboard around,” he remembered. “But the community loved the idea, and for months boxes of stuff kept coming in — old magazines, photos, trophies, even vintage surf baggies and stickers!”

By 2000, the museum made its way to the Natural Art Surf Shop and the volunteer presence, inventory and list of local events produced to fund operations kept growing.

It was 2003 when the museum merged with the East Coast Surfing Hall of Fame organization, and Ron Jon became a corporate sponsor, providing a place for

shelter and exhibits as well as a site for community events. In 2007, the missions diverged and that fall the Cocoa Beach Surf Museum returned to its roots and continued to expand its horizons to financially support its goals.

Among one of the first events that O’Hare and several other volunteer members initially organized to raise funding for the museum’s initiatives was the annual Waterman’s Challenge. Having completed its 21st year this summer, this contest has become one that is part of history itself.

The next year, it expanded to include a stand up paddle contest, amateur age divisions for surfing, and a King and Queen of the beach competition, something O’Hare said was an idea to fall back on, just in case the waves were flat.

“In the summer that is usually the norm, but the surfers, many who were ESA [Eastern Surf Association] competitors, and affiliated with local surfing industry businesses, joined our efforts to promote and participate,” he said. “The local surfers always wanted to compete, and enjoyed the rivalry amongst themselves on the waves, no matter the size.” 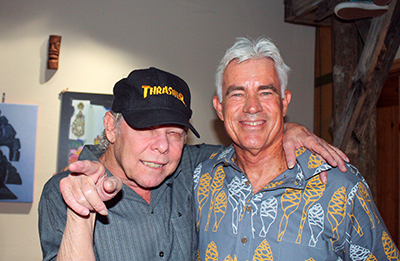 Gary Propper, left, and museum executive director John Hughes during a gala celebrating Propper’s accomplishments and contributions to surfing. He was one of the first inductees of the East Coast Surfing Hall of Fame.

In 2015, the museum widened its parameters to include the collection and presentation for exhibits and showcase surfing history from around the state, changing its name to the Florida Surf Museum.

The museum has multiple exhibits that include themed celebrations and presentations that showcase the work and adventures/history of iconic shapers, surfers and industry standouts. It is led by executive director, John Hughes; president, Bill Tweedy; vice president, Melody DeCarlo; treasurer, Marie Hughes; and secretary, Karen Lucas.

A few past events included former championship tour surfers and twins, the Hobgood brothers; iconic longboard surfer and East Coast Hall of Famer Gary Propper; and a documented video and photo presentation highlighting the annual Women of the Waves event, one that continues to be co-sponsored by the museum.

Hughes, who took over as the president and director in 2015, said he has tried to continue to build upon what O’Hare started.

“When we look to build a new board and photo exhibit I always try to keep in mind that visitors may not always know much about surfing or the history, especially when it pertains to our state,” Hughes explained. “I try to make the displays understandable and fun, while also aiming to hold the interest of locals and committed surfers. We always try to keep it real.

“The most rewarding part of my job is curating the exhibits, doing all of the research and archiving all of the things about our Florida surfing history. I always end up learning new things from our vast collection of magazines in our library.”

The museum provides space for community events and shares a portion of the funds collected through member dues, donations and other fundraisers with several scholastic surf teams who travel to National Scholastic Surfing Association events.

In addition, it has a robust online presence that includes a webpage with in-depth articles, interviews and images that complement and enhance the physical rotating exhibits. The museum’s Facebook page keeps the public informed on upcoming events and frequently posts contemporary and historical videos.

Space Coast Surfing – The Right Stuff features boards and memorabilia from Brevard County, including a trophy awarded to 11-time world champion Kelly Slater for his first world tour win at the Pipeline.

The museum’s signature event, the Surfing Santas of Cocoa Beach, held on Christmas Eve in downtown Cocoa Beach near Minuteman Causeway, is internationally known. It was founded by local surfer and resident George Trosset, who collaborated with museum board members to allow the sale of T-shirts and memorabilia as a way to raise funds and create awareness about the museum.

The museum’s current exhibit, Space Coast Surfing — The Right Stuff, is the first since a major renovation. Hughes said they worked with Ron Jon to completely remodel the space, adding raised ceilings and new LED lighting among other upgrades.

The exhibit includes a trophy belonging to 11-time world champion Kelly Slater, the most decorated surfer in the world, who grew up next to O’Hare in Cocoa Beach. Slater, 50, competes on the Championship Tour and won the trophy at Pipeline in Hawaii. The trophy, which was said to have been shipped to Slater’s residence and received damaged, was found by O’Hare in his neighbor’s trash. O’Hare made a decision to collect the shards and glue them back together, and then donated it to the museum. 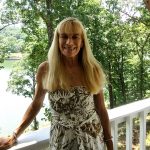 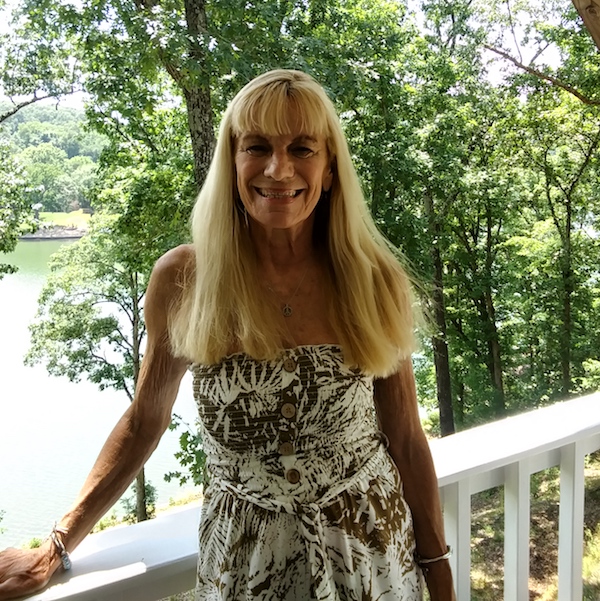