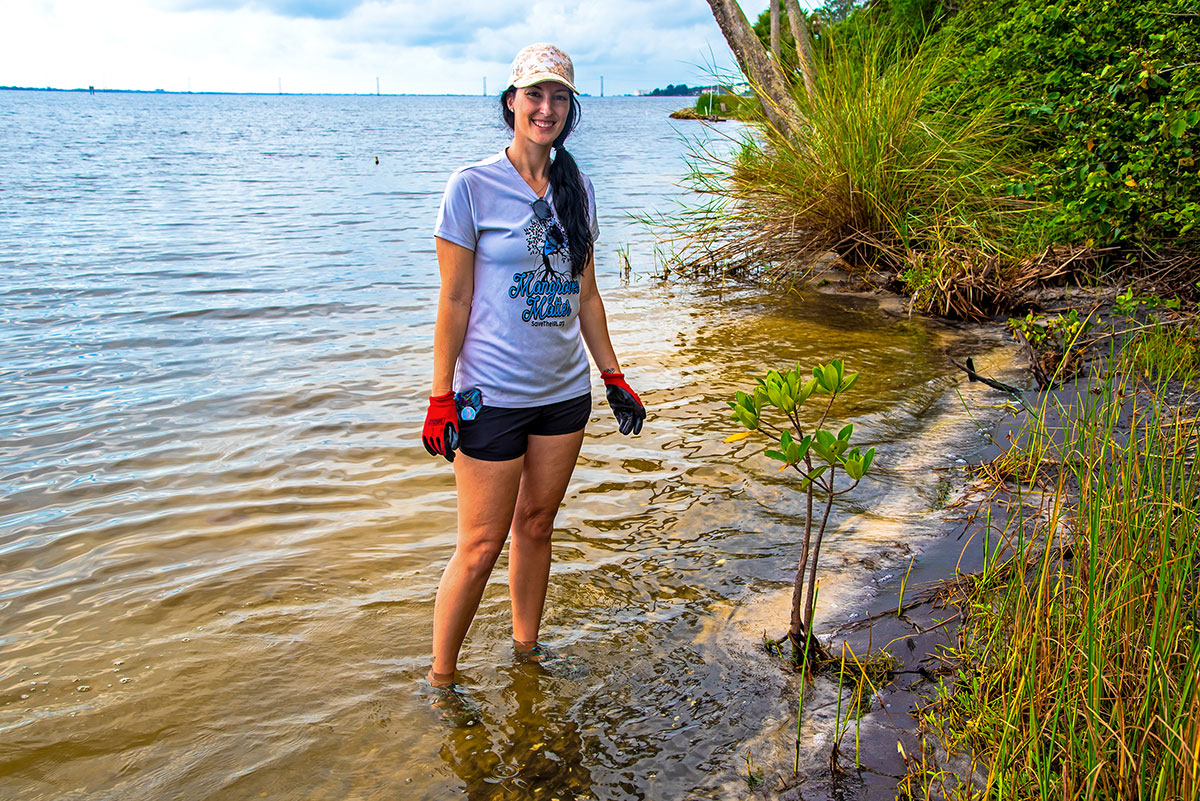 Mangroves are among the most abundant trees on the planet, covering temperate and tropical intertidal shorelines around the world. But as development sprawls in Florida’s coastal areas, mangroves are disappearing at an alarming rate. The loss of mangroves in the Indian River Lagoon has scientists and environmentalists worried.

Florida waters once had millions of acres of mangroves. But with all the coastal development in the past 50-60 years, the estimate is less than 470,000 acres, according to the Florida Department of Environmental Protection. Along the banks of the Indian River Lagoon, it is estimated 65%-80% of the mangroves are gone, lost to development pressure.

Around the world there are mangrove replanting efforts designed to counter the rising seas of climate change. Millions of acres of mangroves have been replanted in Indonesia, Malaysia and throughout Southeast Asia. Replanting in Florida is less ambitious. The University of Central Florida has planted more than 2 miles of mangrove shoreline in the Mosquito Lagoon, near the Kennedy Space Center. The Marine Resource Council has more than 5,500 plantings in the lagoon.

According to Melinda Donnelly, assistant resource professor, the UCF project has been ongoing since 2011. It is one of many smaller private restoration projects underway in Central Florida’s lagoons and bays. The state does not have public mangrove projects, although some state grants are provided to universities and nongovernmental organization projects that have replanting programs. 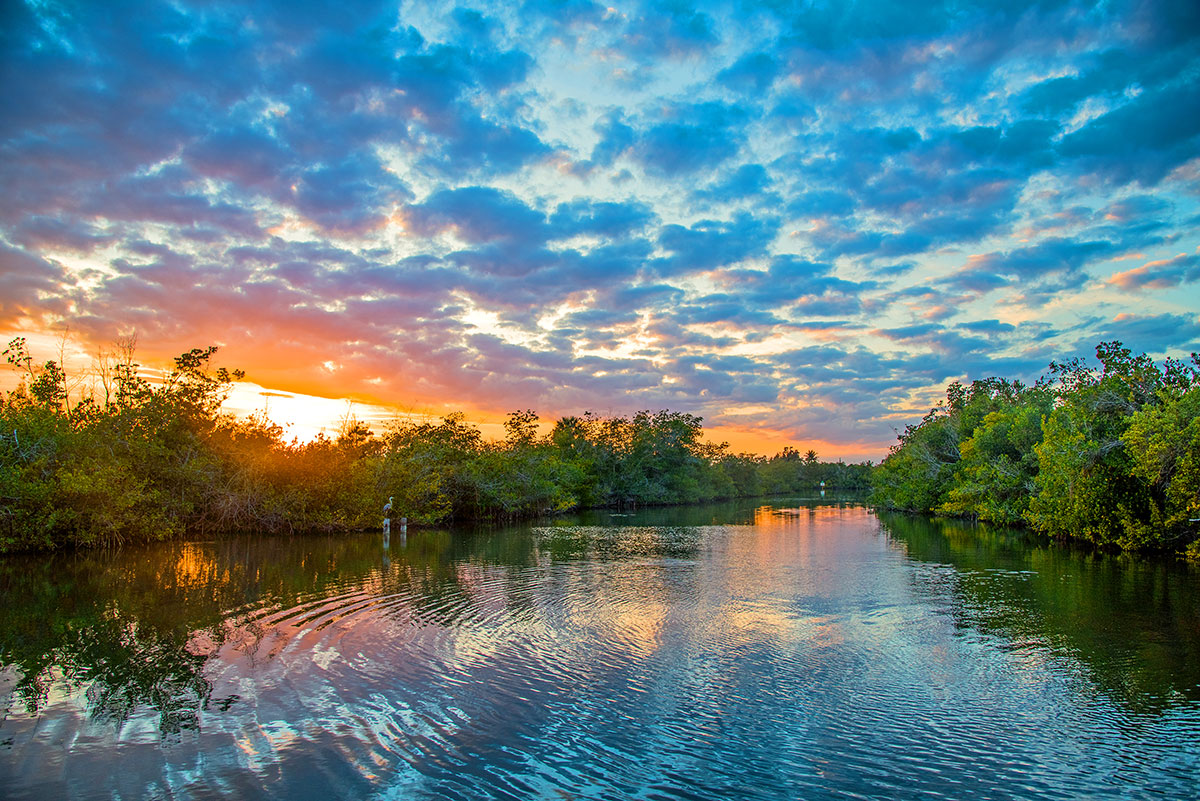 The loss of mangroves in the Indian River Lagoon has scientists and environmentalists worried. These mangroves can be found in the channels in Cocoa Beach. FRED MAYS

PROTECT SHORELINES
Mangroves are halophytes, plants that can live in saline water. They play an important role in the environment and the battle against climate change. They are a strong carbon sink, trapping carbon dioxide in the atmosphere at a rate 10 times more effective than land-based trees. They emit high levels of oxygen back into the environment; protect shorelines from erosion; and provide habitat for marine life.

After decades of developments ripping out mangroves, it is illegal to cut down mangroves without a permit. Although they form a natural and effective barrier against shoreline erosion, many property owners tear them out and replace them with seawalls and large boulder riprap barriers. Because of the permitting requirements, the loss of mangroves in Florida has slowed, but more is lost than can be replanted.

Tearing out mangroves can be a costly mistake. During Hurricane Irma in 2017, an estimated $1.3 billion in property damage in Florida was averted by mangroves, according to a study by the University of California at Santa Cruz. Seawalls can often be topped and breached by pounding storm surge in hurricanes, causing them to lean and eventually collapse. Studies have shown mangrove shorelines are more effective in preventing damage from storm surges. 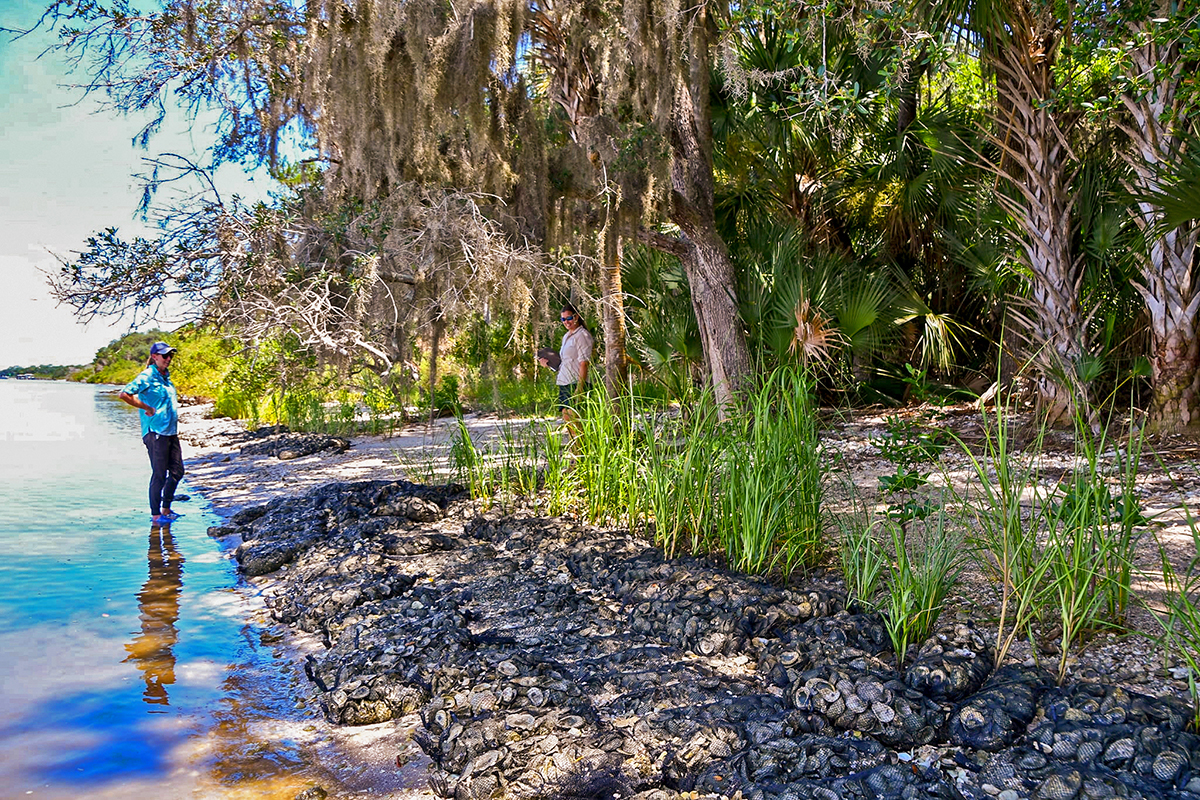 Mangrove plantings are placed behind a buffer of oyster shell bags and sea grass in order to maximize their chance for survival. UNIVERSITY OF CENTRAL FLORIDA

COLORFUL VARIETIES
Globally, there are dozens of varieties of mangroves. In Florida there are three: red mangroves [Rhizophora mangle], white mangroves [Laguncularia racemusa] and black mangroves [Avelennia germinans]. Each has a role to play along shorelines.
Red mangroves are found at the mean tidal waterline, their roots surviving in the salty water. Reds drop seedpods year- round, and propagate quickly, growing nearly 5 feet in a year. As their long roots grow they become habitat for oysters, small fish, even young sharks.

White mangroves are found just behind the reds on the shoreline. The reds and whites offer a stabilizing environment, reduce erosion and fill in sand along the intertidal area. It is not uncommon for shorelines to grow 10-20 feet when lined with mangroves.

Black mangroves are farthest from the water line. They have larger trunks and their leaves secrete salt to rid the tree of the saline water. Blacks are the tallest of the mangroves, sometimes reaching 15-20 feet high. Their wood has been used as a building material.

According to Donnelly, the majority of Florida mangrove loss in the last 30 years has been due to human activities, but not all of it. Mangroves thrive in the temperate and tropical zones, but are intolerant to cold weather. A series of hard freezes in the 1980s wiped out much of the mangrove cover in Central Florida.
Donnelly says large scale mangrove restoration has occurred in the last 20 years.

But restoring mangrove shorelines can be hard work. Some restoration projects report less than a 50% success rate in replanting efforts. Donnelly’s group has come up with a replanting process that yields a much higher rate of success. 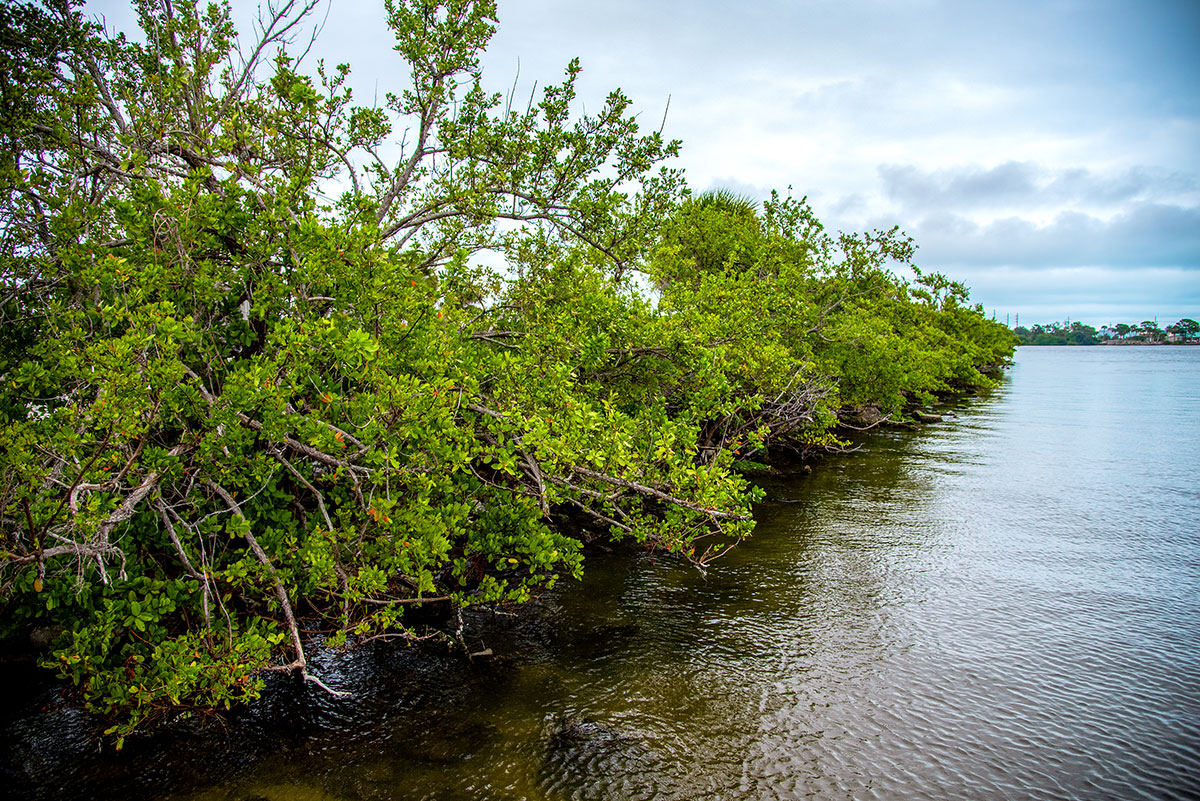 It is estimated 65%-80% of the mangroves along the banks of the Indian River Lagoon, are gone, lost to development pressure. FRED MAYS

REPLANTING PROCESS
Using Donnelly’s system the shoreline is first protected by several feet of bagged oyster shells to buffer wave action. Behind the oysters are wetland grasses [Spartina alterniflora], which further protect the intertidal area. Mangroves are then planted behind the grasses in different rows. First, the red mangroves, then the whites and finally the blacks. Donnelly says their success rate is 85% or higher.

“Some sites had zero percent success rates,” she says. 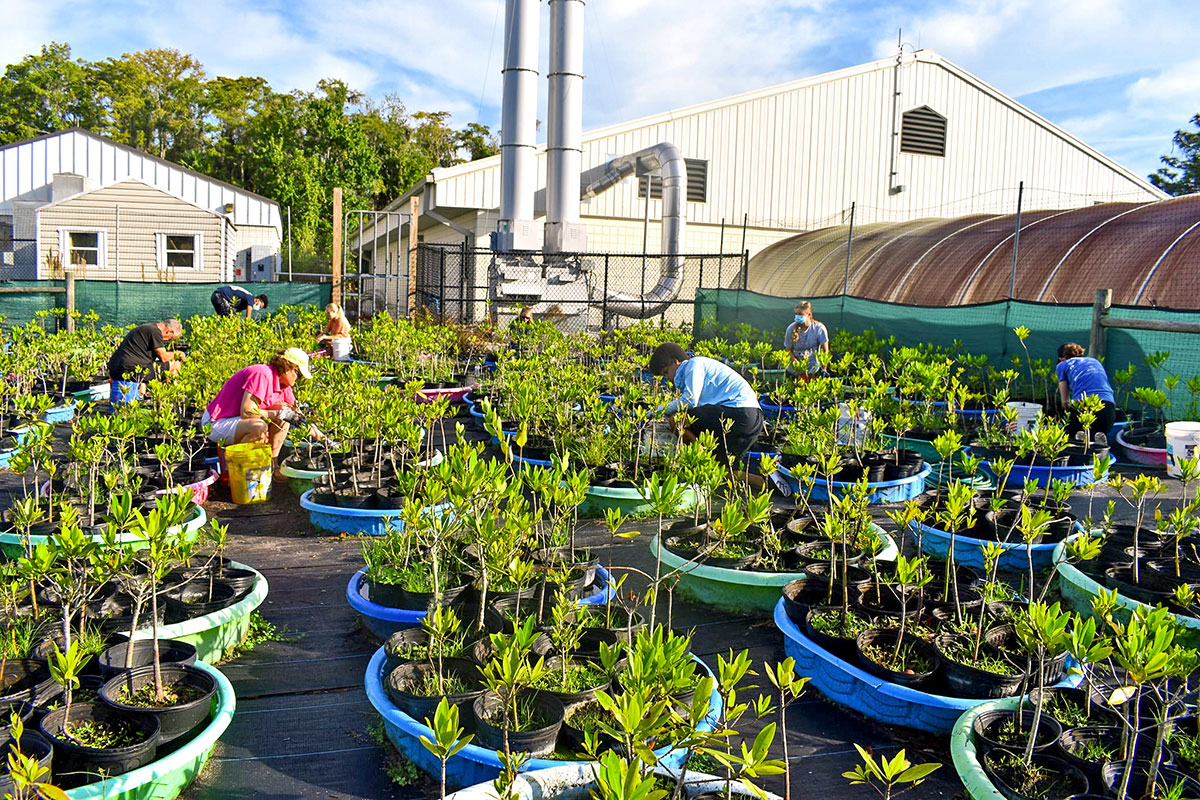 A number of volunteers work among the pots and children’s swimming pools filled with mangrove seedlings. The plants will stay at this mangrove nursery until they are ready to be planted along the shores of the Indian River Lagoon. UNIVERSITY OF CENTRAL FLORIDA

But behind the breakwaters the rate has been up to 100%. She laments not having enough natural shorelines left to replant, due to development in the coastal areas along the lagoon. She estimates 65% of the natural shoreline in Florida’s Indian River Lagoon in Brevard County has been lost behind seawalls and hardened shorelines.

The Marine Resource Council is planting mangroves along the lagoon shore in Palm Bay. It has a nursery for mangrove seedlings in Palm Bay and another in Vero Beach.

When people think of trees in Florida, palm trees usually come to mind first. But it is the mangrove that is most important to the environment.