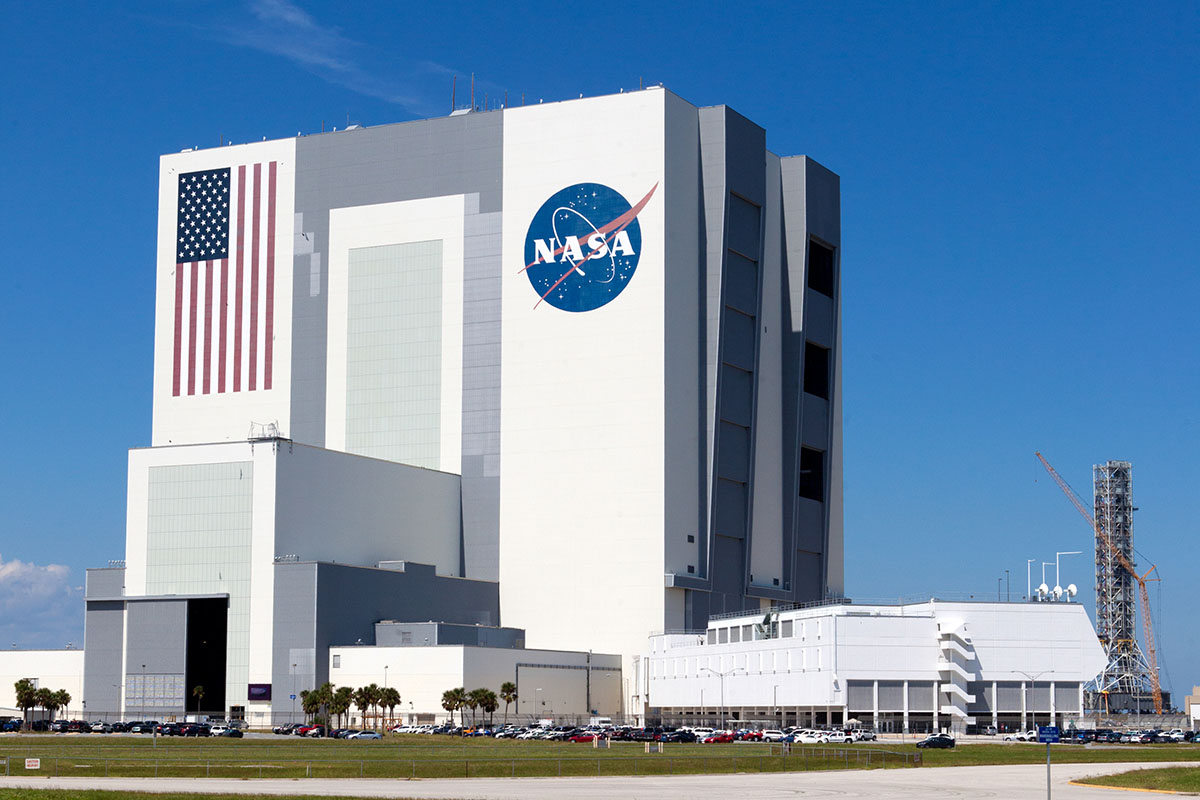 NASA’s Vehicle Assembly Building at Kennedy Space Center in Florida was used to assemble and house American-crewed launch vehicles from 1968 to 2011. AT 3,684,883 cubic meters, it is one of the largest buildings in the world by volume. Inside the facility, High Bay 3 is being upgraded and modified to support processing of the agency’s Space Launch System rocket and Orion spacecraft. NASA 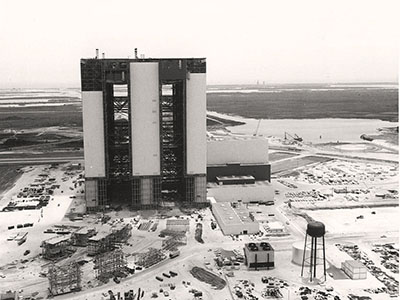 Emblazoned with the American flag and NASA logo, the Vehicle Assembly Building looms suddenly into view as visitors approach the Kennedy Space Center. The landmark that helped put Brevard County on the world map has more than earned its distinction as a symbol of America’s space program since its completion in 1966. It has served as the hangar for 56 years of space flight missions, from Apollo to the space shuttle and now the ambitious Artemis program to sending humans to the moon once again and beyond.

The people involved with the Vehicle Assembly Building regard it with a sense of awe.

To 98-year-old architect Philip Moyer, the Vehicle Assembly Building meant meeting a seemingly impossible deadline. Moyer, a World War II B-17 fighter pilot-turned-architect, was the project manager for both the Vehicle Assembly Building and the Launch Control Center. His firm, the Max O. Urbahn architectural firm in New York, led the consortium awarded the contract by NASA in the early 1960s. Construction started in 1963 after much design work.

The building’s award-winning legacy is clear to Moyer. 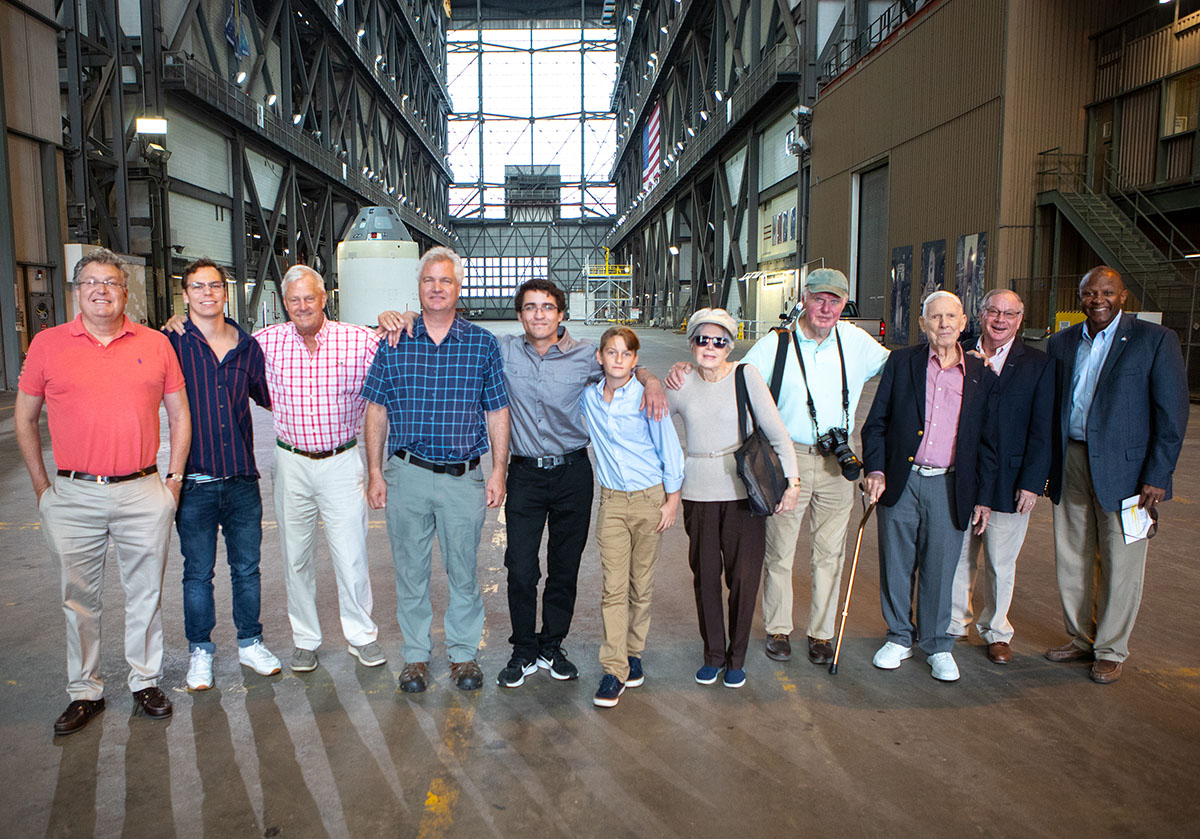 During the Apollo moon landing 50th anniversary, Philip Moyer, third from right, project lead for the VAB, and Dick Bergmann, fourth from right, lead designer for the VAB, tour the facility with the families of architect Max Urbahn and Kelvin Manning, KSC associate director. NASA

“It’s the center of our space program as far as the government’s concerned,” he notes with a nod to commercial launch programs in a telephone interview from his Vero Beach residence. “The outfit I worked for still flies out of the VAB.”

He visited Merritt Island to view the site well before September 1961, when NASA began purchasing the land. Moyer arrived via Jacksonville in a jeep driven by an Army Corps engineer.

“There was nothing there but alligators at the time, not one structure on the site,” he says. 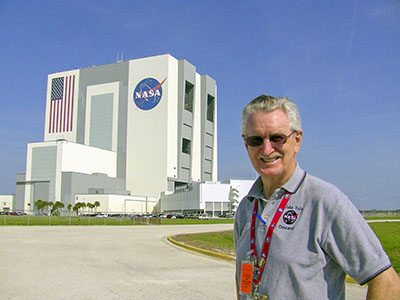 “The overall challenge was that President Kennedy insisted we go to the moon by 1970,” Moyer says. “At the peak, we had 250 architects and engineers working on it with four major firms and also specialty architects. There was a lot of overtime and night work.”

John Tribe, 86, sailed the Queen Mary in January 1961 from his native England to Titusville to work as a propulsions engineer with NASA. For the next 43 years, he would spend days and nights at the VAB as a contract engineer with North American Aviation, which became Rockwell International.

“The VAB is iconic,” Tribe says in a telephone interview from his home on Merritt Island. He has volunteered as a tour guide at the space center since he retired as an engineering director in 2004. “People know what it is and what it’s still doing. We went from a swamp to having the foremost launch site in the world, and I’m proud of my involvement with it over these 60 years.”

In April 1965, Tribe was on hand along with hundreds of workers eager to sign their names on the close-out beam at the 500-ft. level atop the building. 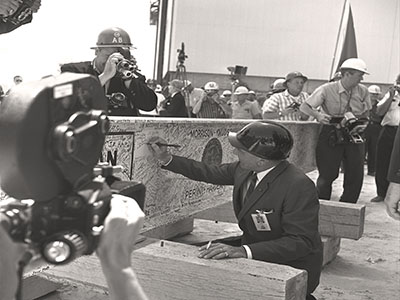 Kurt Debus, Kennedy Space Center’s first director, adds his name to thousands of others on the 38-foot-long steel beam during the VAB’s topping off ceremonies on April 14, 1965. NASA

The building not only served rocket assemblies but also had many offices, including Tribe’s, labs and workshops during the Apollo missions. “We worked seven days a week,” he says. “It was a national effort. We were fired up.”

He recalls running up flights of stairs trying to see launches and once running out of energy before he could top them.

Offices and labs were moved out of the building at the start of the space shuttle program for safety. But the building’s low bay, four high bays, transfer aisle and several heavy-lift cranes remain as essential parts.

In 2011 when the shuttle program ended, Tribe was among the 5,000 current and former workers who signed their names on a specially designated wall in the VAB.

Titusville resident and former NASA operations engineer Albert Koller, 80, shares Tribe’s sense of wonder that the building encompasses. He was a Titusville High School senior and avid model rocket builder in 1959 when Army Ballistic Missile Agency recruiters hired him at his school’s science fair as a summer intern. 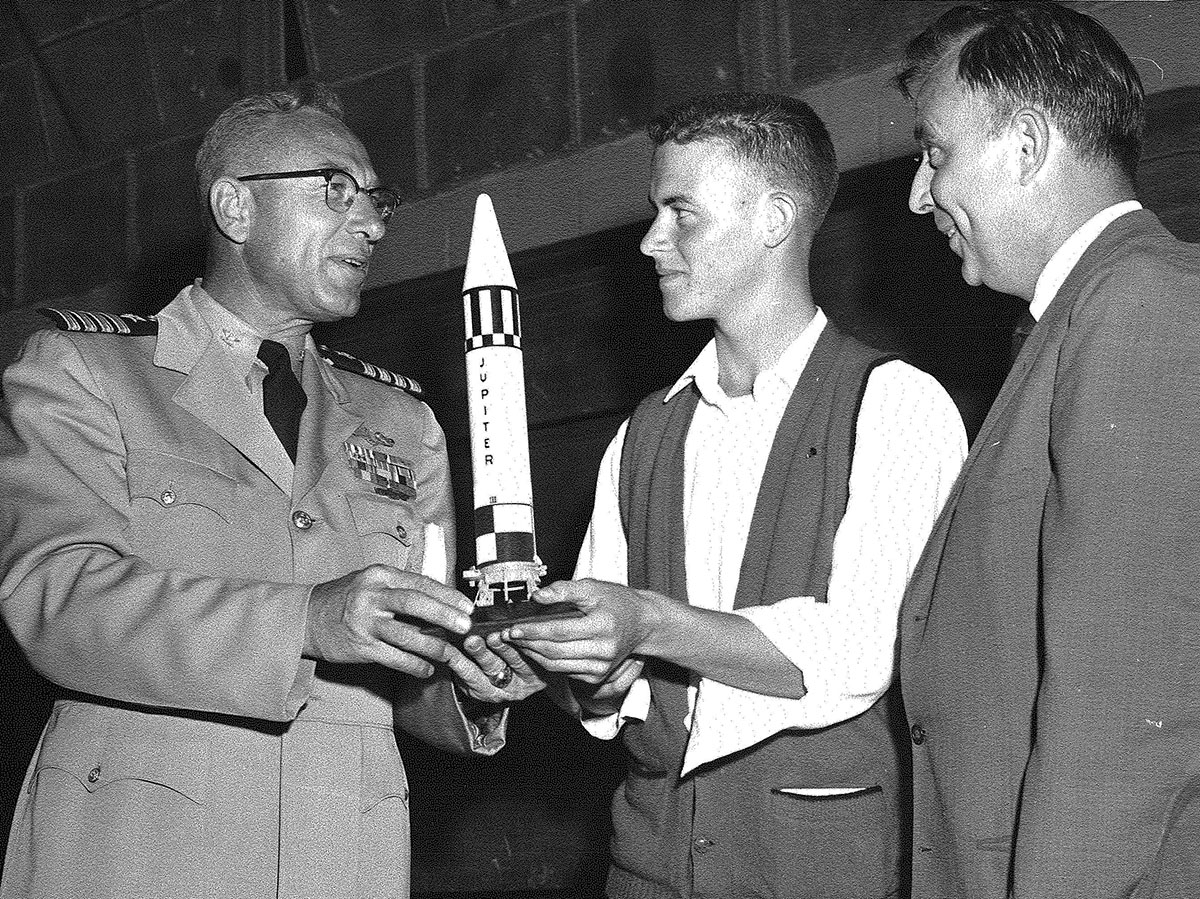 A Jupiter missile model is awarded to Albert Koller, center, for his science fair project at Titusville High School. In 1959, Bob Gorman, right, recruited him to intern at the Army Ballistic Missile Agency. He worked at Kennedy Space Center for more than 30 years. ALBERT KOLLER

“The town was an accepting people who put up with a tremendous amount of change,” Koller says of Titusville in a telephone interview.

The assembly building is a feat to Koller, who retired from the Kennedy Space Center after 32 years and continued his career at Brevard Community College in aeronautical technician education. “It was a large undertaking,” he says. “Someone had to figure out how to make it work right. It’s a real testimony to the civil engineers who put it in place.” 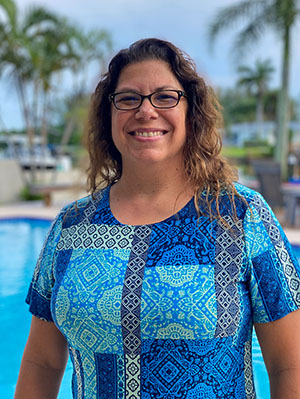 Ground integration engineer Olivia Fuentes is involved in a safety training system for astronauts in the VAB for future Artemis flights to the moon. NASA

Features that still amaze him include the 456-foot-tall doors on the four high bays on the building’s highest section. As the tallest doors in the world, they require 45 minutes to open or close and enable the rockets to be stacked vertically and then rolled to Launch Pad 39A 3.5 miles away or the 4.2 miles to Launch Pad 39B.

Former crane operator and mechanic Daniel McKune, 73, started at the Kennedy Space Center in 1983. He says stacking the shuttles at their final points was like choreographing a ballet – with two 250-ton cranes and one 175-ton crane and a lot of people on every shift.

“You were communicating with the other operators at all points, and you were going slow and easy,” says McKune, who was under contract with United Space Alliance. “We took care of everything. We operated and maintained the doors, the platforms and cranes overhead.”

After operating cranes, he was the lead mechanic in the launch equipment shop from 1993 until he retired in 2014. McKune, who resides in Cocoa Beach, volunteers at Titusville’s American Space Museum, still devoted to space and mechanics.

On the crane, he sat 456 feet high in an enclosed, air-conditioned booth.

“We’d be stacking a booster or shuttle and there would be a launch 3 miles away,” McKune recalls. “It would oscillate a little bit.”

His life’s work in the space program is a dream fulfilled.

“Being a critical part of that chain was exciting,” McKune says. ‘At that time, no one else had a vehicle like the shuttle. There are a lot of unsung heroes who all contributed vastly.”

The Artemis 1 Space Launch System rocket and Orion capsule are surrounded by work platforms inside High Bay 3 of the assembly building.

The VAB’s interior has been modified to serve its flight systems during the 56 years of the spaceport’s launches. The elevators and work platforms had to be redesigned for the shuttle program and the same has been done for the Artemis mission. Exterior physical maintenance from aging and hurricanes has been ongoing.

“The building’s interior has undergone lots of changes,” Koller says. “But with all of that change, the VAB has remained the centerpiece of the Kennedy Space Center. It’s still as viable today as it was when we began.”

Its longevity is widely acknowledged. The Florida Association of the American Institute of Architects awarded it the Test of Time award and the American Society of Civil Engineers designated it as a National Historical Engineering Landmark. It is on the National Register of Historic Places.

Olivia Fuentes, a NASA ground integration engineer, looks to an exciting future for the assembly hangar in its part with the Artemis missions. She works at the Kennedy Space Center’s Exploration Ground Systems that has been updating the assembly hangar since 2014 as part of NASA’s challenge to head back to the moon and later to Mars.

In mid-August, the 5.75 million-pound, 322-foot-high combined Space Launch System rocket, Lockheed Martin’s Orion capsule and mobile launcher were set to roll out from the massive hangar to Launch Pad 39B to launch no earlier than Aug. 29 for an uncrewed Artemis I test flight orbiting the moon and returning.

A few of the major upgrades include 10 levels of flexible platforms installed in the high bay that can move in and out and up and down, Fuentes explains via an online video call in July. A new fire protection system and environmental control system have been installed and all four of the huge liftoff doors on the high bays have been upgraded. She is proud of an emergency egress system being installed in the assembly hangar to train the astronauts for safety procedures.

“Everything has a time and place for the work to be done, and the steps in which the different tasks need to be done are critical,” Fuentes says. “It’s been quite a feat and quite a journey for NASA to have so many people come together for Artemis 1 and ready to launch. We are very blessed to be part of the program.”